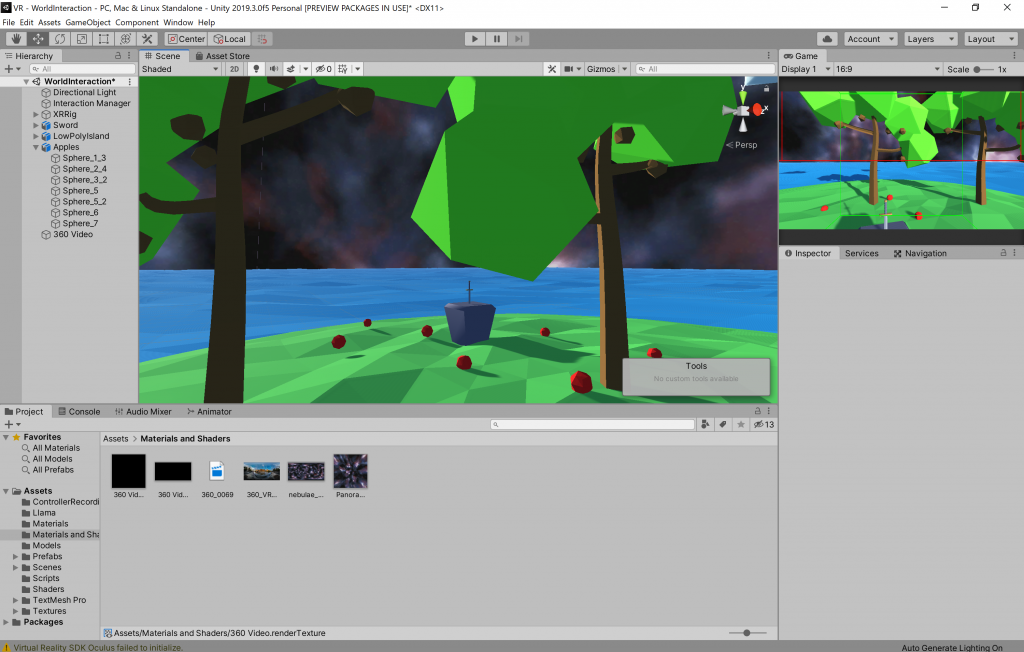 In today’s introduction to VR development in Unity, my group had several technical issues with setting up the Game Lab’s desktop computer and the Oculus Quest. This resulted in a very limited amount of time to explore the Unity XR Interaction Toolkit. Fortunately, we did find the time to try replicating the example interactable objects by adding the Lhama object’s bubble effect and an instantaneous grab interaction to a capsule. After experiencing the grab types, I found that the closest proximity grab tool (Kinematic?) would be perfect for adding immersion to the game. It is not realistic to have an object teleport to you from a distance because bending down to pick up artifacts and trash comes with the beachcomber/cleaner job description.

The UI elements were cool to explore, but we found that it was unlikely that we would have to implement them. We could possibly use a scroll bar on an inventory for the objects collected, but I believe it would be unnecessary because the number of objects in each collection based trigger will be small (only 2-3 objects). If the inventory (a bucket) is overfilled with unnecessary objects, the environment will not be triggered.

Finally, I worked on implementing panoramic images and 360 videos to the skybox. The panoramic images worked perfectly but I had some issues with the video player not recognizing the render texture for the 360 video. I was unable to retest the issue, but I believe we may have given the render texture the wrong dimensions. In my future explorations, I want to see if I can add multiple 360 alpha textures/videos to a scene or if I should just stick with strategically placed textured planes.

Finally, my Oculus application kept throwing an error that I seemed to prevent me from setting the Quest up with Oculus link with the Quest. The app did recognize the headset and showed that it was “connected”, but I was unable to connect it to Unity. I tried repairing the app, but it still threw the error. Hopefully, by next week I can get the issue sorted out.