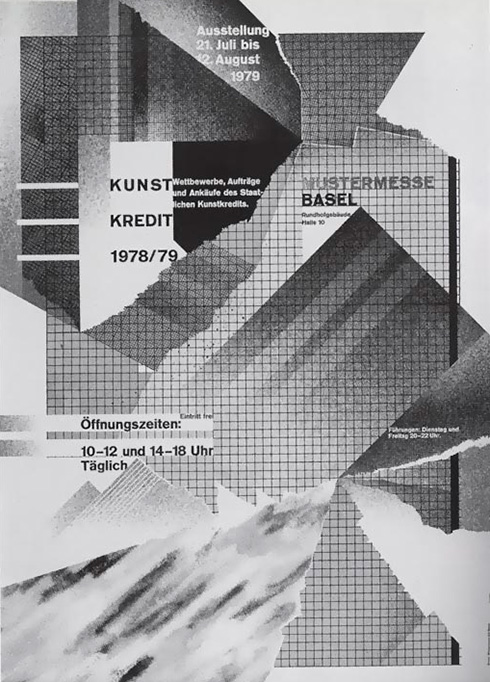 Typography in Postmodernism, late 20th to early 21st century expresses the new technologies and idea’s that come with this period. “Adobe Systems” was developed in 1982 by John Warnock and Chuck Gerschke, this was a huge finding in the history of typography and design (Tselentis, 2012). With these new findings, type is expressed more as an art form. The ability to visually abstract type and design pushed designers to go beyond simplicity. In this time period simple type design wasn’t as common, designers were expressing their work and pushing it to the extreme in order to grab the attention of the viewer.

The design “Poster Kunst Kredit,” by Wolfgang Weingart uses photoshop to collage graphic design and typography together in a coherent piece. The typography in this is very small scale compared to the imagery, but still visible and relating to the imagery. The letter weight is very bold, making them still stand out just enough against the intense background imagery. The scattered collage makes the imagery somewhat chaotic, whereas the type is a more controlled version of the expression. The black, white, grey gradient type are strategically placed throughout the same colours of the collage. The alignment of the black, white, and grey collage and type merges in a way that reflects and playing into the overall collage design. With the straight alignment of the type, the three dimensional collage stands out. Also the hierarchy was well thought out as the important type is larger. The 3D aspect makes the larger type seem closer and the smaller, less important type further.  Weingart organized this graphic design poster well, as there was a quite a bit of information (type) to place on the page. His designs combined type and graphic design styles in an interesting way with his blend of different techniques that reflects the expression of Postmodernism. He approached this in a unconventional, expressive way, speaking to the Postmodern design era.

Wolfgang Weingart’s posters reflect the use of digital sampling and Photoshop. Weingart expressed his work through photoshop layering, he was known as the “father” of the New Wave (Meggs, 2016). Type has no limit in the digital age, designers like Weingart push boundaries with their designs. Postmodernism is defined as ‘defensive’, in a state of argument. Culturally and socially, this was an era of sparking controversy and challenging modernism with forward thinking. This forward thinking is expressed in typography design through the use of collages, layering, black and white, intense layout, and sharp, rigid design. These postmodern designs were elements on the page going against normal design, challenging new designs and layout, much like the controversial, going against the grid way of thinking that came with this era of Postmodernism (McRobbie, 1994). Weingart successfully expressed the era Postmodernism style through his designs. The collages, layering, black and white, intense layout, and sharp, rigid design of his designs, and complementary type all worked together in his “Poster Kunst Kredit” design. 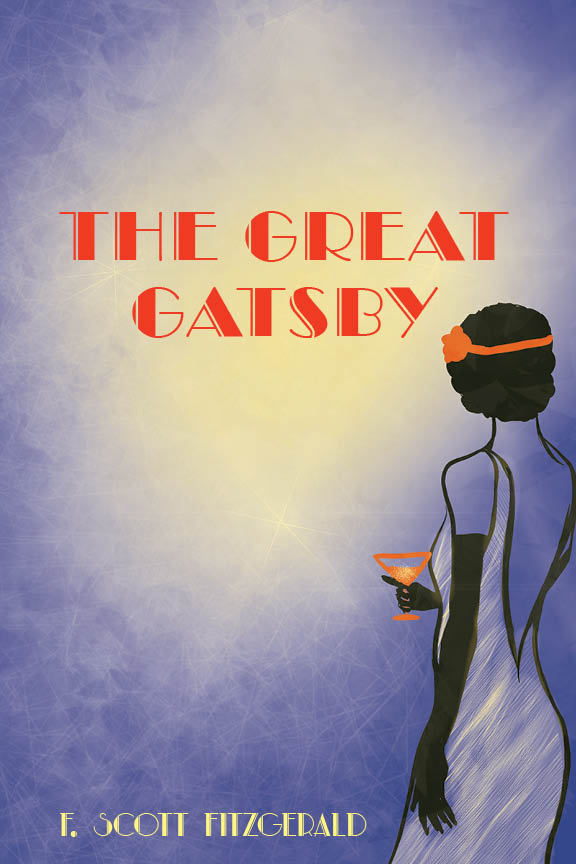 The book cover I’ve chosen to redesign is “The Great Gatsby,” by F. Scott Fitzgerald, published in 1925. The novel was written and takes place in the roaring twenties. I wanted to highlight the appeal of the glamorous nightlife that is envisioned in the book. The roaring twenties was a time of change; a new nightlife scene had arose, fashion, music and other cultural trends were changing. There was a cultural shift happening during this book that I wanted to highlight in the cover.

I wanted to keep a similar colour palette to the original, as I feel it expressed great emotion through the colours. The deep blue as the main colour with yellow shining in the centre highlighting the title, and hints of red to contrast. The bright yellow in the middle reflects the bright shining lights in the nightlife scene. The woman is mysterious, as we cannot see her face, and is looking into the light. I wanted it to be sort of mysterious, but enticing where you are drawn into this light. Reflecting the glamour nightlife of the 1920’s in the bright lights, with a theatre type of setting. Also, reflecting the roaring twenties, showing an outlined illustration of a woman dressed in a flapper outfit. I used the typeface ‘broadway,’ an art deco font from the 1920’s. This helps sell the allure of the nightlife, as this type of decorative font was often seen in nightlife poster designs. The type is the main focus point as the black outline of the woman and the bright centring light draws your eye to it. Then the viewers eye is drawn to the woman and then moves down to the authors name.

My cover redesign was inspired by the Art Deco posters of the 20th century, below are some of the design that inspired me. The simplicity of the flapper girl, I thought would be a good subject for the cover. The typefaces, shining lights, and the allure of the entertainment scene in John Mailley’s “Zeitgeist” (shown below) inspired the design of my cover. “Aurore,” by Jean Chassaing inspired me to try to create a large gradient of light that draws your eye to the type.

The blueprint of advertising in the 19th century towards white consumers, for the most part would depict an African-American as a counter to the white subject. Before the Industrial revolution, this depiction of the African-American subjects were seen as labouring to the white subjects using pre-industrialized devices. The depictions would show the African-American as less to the white counter; from serving the white subjects, to being depicted as criminals beside the white officers. This was a problematic theme that was repetitively shown throughout illustrated advertising cards in the 19th century. These cards were targeted advertisements from brands, highlighting products. These cards were strategically made to appeal to the white consumers, in what was “ideal” in that time. They would then become a popular collectors item at the time, spreading these racist ideologies.

Although many cards were scenic, nature depictions, almost half of these advertising cards had called on some sort of racial stereotype. There was always a contrast between the two subjects from a visual and cultural context. The card in the image above depicts an  African-American woman, who is stereotypically over-exaggerated in her features. Contrasting the white woman who has much smaller, slender features. Clothing also shows a contrast between the two, the white woman is depicted wearing cleaner, more proper clothing. Whereas the African-American woman is shown wearing more worn out clothing. It is also evident that there is a contrast between their speech. They depict the African-American woman’s speech as exaggerated and stereotypical “black dialect.” Whereas the white woman’s text is proper English. This stereotypical, racist advertisement is a product of the ideals and perspective of the white consumers from this time.

This next trade card is another example of advertisements that depict an African-American subject juxtaposed next to a white subject in order to appeal and profit off of white consumers. The image is a Fairy Soap

advertisement card from the late 1880s, depicting two children. The white child is seen as properly dressed and clean holding the Fairy soap, whereas the African-American child is depicted wearing dirty, raggedy clothing and no shoes. The racist views that darker skin colour is associated with the idea of “uncleanliness” is an underlying message in the card. Another stereotypical, racist depiction of African-American’s in 19th century advertisements, that were the result of the “ideals” from white consumers of that time.

These advertisement cards all show an underlying theme of this juxtaposition of the African-American and Caucasian subjects.  The brands/companies targeted the white consumers by using these racist, stereotypical “ideals” that were rooted in history, in the 19th century. They express the theme of white superiority across these advertisement cards in order to appeal to white consumers.