10:00am – For this lab I attempted to design my own 3D assets in a VR environment using an application called VRCAT. The learning curve was pretty minimal, however it did take me a solid 10 minutes to figure out how to place and arrange things in the proper orientation. I made a few abstract 3D objects, a house, a game map, a dome etc., but I was not able to export them as an .OBJ file. I tried to find a quick fix online but none of the given suggestions worked for me, I am still trying to find the saved objects on the desktop!

I also used PaintLab which I really liked because it allows you to create objects with pre loaded textures and materials. I made a few objects including a window, a tree, and some crystal particles. However, I had the same problem that occurred when I used VRCAT, I was not able to export the files. I just took some pictures with the VR camera instead. 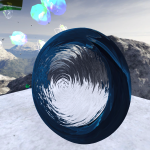 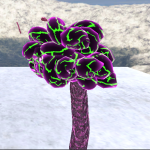 11:00am – During this portion of the lab I explored a 360 video experience called Coral Compass. The experience was incredibly disorienting for me, and the quality of the video itself was not as high resolution as I would have liked it to be. However, I did really admire the use of 360 video to show the impact of climate change as this is something I wanted to do for an upcoming project.  While this 360 experience was lacking for me in many ways, it did give me an idea of what not do when designing for VR.

12:00pm – Next, I played an interactive VR music video which I  kind thought was a game at first, it was called Show It To Me. I really enjoyed the  incorporation of the visuals and the music in a VR environment. The interactivity of the experience was pretty minimal and could use a bit more work but overall I really enjoyed this one!