During the development process, I have been working on shooting and editing the 360 Video for the Garden and Bluff’s, sourcing and recording sounds for background folly and further developing the user experience through flow charts and process documents.

Over the past two weeks, I have done two 360 video shoots. The first one was at the Scarborough Bluffs. Unforchanatly, This shoot was very physically taxing and in the end, not too successful.  The weather the day of the shoot was not consistent throughout the day, by the time I made it up to the top of the bluffs it had begun to snow and the overcast lighting was very dim. Also, hiking up the Bluffs in the freezing snow with a tripod, camera, microphone, etc., was challenging. I had to do this twice because at some point my Yi360 camera died. As a result of all these challenges the captured video was too dark, shaky and overexposed in areas where the light reflected off the snow. Needless to say, this experience was not a pleasant one but I did learn a  lot from the process. 1. Always check the weather before doing an outdoor shoot 2. Carry a portable charger for the camera 3. Don’t wear combat boots on a hike.

The next shoot was at Allen Gardens. Luckily the staff keeps the indoor gardens warm for the plants so I did not have to worry about the cold so much as making sure the sun was out for good lighting. I did several shots all around the gardens using the Yi360 camera and the smartphone app. I feel like the app really improved the efficiency of my workflow and made it easier to get shots without being captured in the footage. I did have some challenges getting the footage to be at an average human height because the staff at Allen Gardens do not allow tripods or video shooting in general. Therefore, I had to sneak around the staff and hide the camera in inconspicuous places to get the footage. This experience was by far easier than the last part because I was able to get the app working (which made it easier to sneak) and the weather was much nicer that day. One lesson I learned from this experience was to check for permits before showing up to a shoot location. Allens Gardens is a free entry community space so I assumed that video shooting would not be a problem, and it isn’t as long as you have the permit.

While on-site for shoots I was also using the ambisonic sound recorder to record the sounds of the water at the bluffs, the sound of chirping birds and chatting pedestrians at Allen Gardens. Furthermore, I have done some research regarding sound design. Through my research, I found that a number of frequencies and sounds can help induce a sense of calm as well as ‘mindful’ brain activity. These sounds include isochronic tones, Tibetan sound bowl sounds, Solfeggio frequencies, sounds of nature, etc,. The next step was to compile a list of sounds that fit within each scene that are proven to increase stable brain activity.

As we iterate and change our development process the user experience diverges and converges. Part of my role in this team is to consistently update the documentation and user flow charts with any changes that are made to the overall experience and why. My secondary role is to be constantly monitoring these changes and adjusting our timeline and project management as needed. 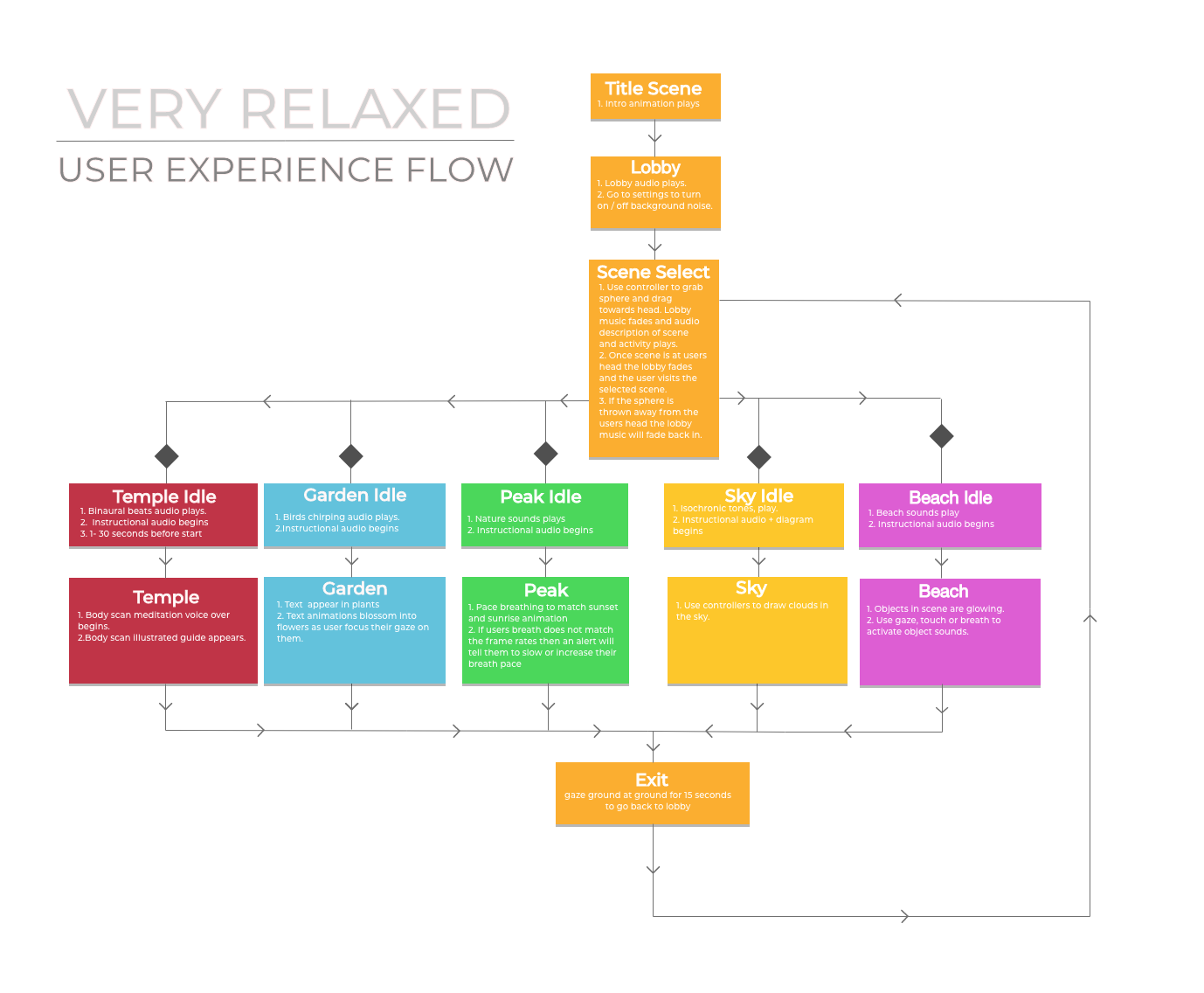