This poster was designed for the Stearns bicycle Agency in New York by Edward Penfield in 1896. Stearns Bicycles was among the leading bicycle manufacturers, and the poster was meant for advertisement. The poster design is fairly simple and shows that an average individual can ride bicycles manufactured by Stearns (Margolin 56). The choice of displaying a woman riding the bicycle shows a collection of several strengths, as well as weaknesses of both genders. This modest graphic illustration is a perfect and exceptionally rare consciousness of the period between 1890 and 1900, and therefore the yellow Fellow model bicycles by Stearns was highly popular and by extension heavily marketed by the manufacturer (Margolin 56).

The bright colors used in the graphic design shows general happiness derived from riding the popular Stearns Bicycles, which perfectly conforms with the textual “Ride Stearns and be Content” the author of the poster, Edward Penfield was considered as the father of American advertising, and he ensured that the message portrayed by the poster is bold and simple, and has the ability to stand out from a far distance with great intelligibility (Margolin 56). In essence, the display illustrates how simple it is to ride a bicycle, even the weaker sex especially women can also ride bicycles with ease.  The end result or message portrayed by the designer is that Stearns Bicycles are a trusted brand, and for every body’s use.

The type face or font used in the text are quite basic and stand out, and the color combination makes it look like riding Stearns Bicycles is an everyday endeavor. However, the woman’s hair in the graphic design and the bike has the same color, which does not augur well that can easily be mistaken that the advertisement is meant for women’s hairstyles (Reed 114).

By applying a critical lens to Penfield graphic design, it reveals the underlying ideology behind the value proposition of the Stearns Bicycle Brand. The emerging modernism and the transatlantic print culture in the period between 1880 and 1940 were characterized by chromolithographs and color that encompasses the promotional goal of the graphic design (Margolin 56). The poster done in the 152by 116 centimeter dimensions was predetermined by the culture, history, as well as the public sphere  through theory, discipline, and methodology  that provides evidence of both visual and textual images are used to interpret meaning.

Considering the perspectives of gender and sexuality, the woman is Caucasian white, possibly a housewife from an affluent family who rides the bicycle with a lot of ease (Reed 114).  The femininity depicted is therefore evidenced by the bicycles design that is specifically meant for female bicycle riders who take pride in riding bicycles for leisure purposes (Margolin 56). Thus the message intended to be portrayed by the designer is clearly illustrated by the graphic design of the poster, as a promotional material. Therefore, the poster is suitable for displays in bedrooms, dormitories, studios, offices, and anywhere where blank walls are not welcomed (Reed 114).  Finally, the poster’s description, ‘Ride a Stearns and be content’ reveals the history of cycling and bicycle riding in Syracuse, New York. 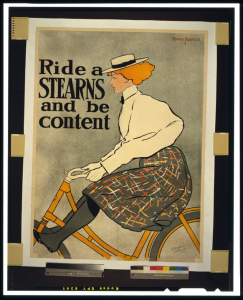