World War 1 is one of the ‘memorable’ events in the 20th century. Thanks to the war, the world was subject to mass destruction at the hands of new military technologies and warfare trenches. However, another significant force in catalyzing this event was the print media. In the same period, the United States’ film industry and commercial advertising were experiencing were receiving recognition. This tool was a major element in driving the war agenda, recruitment process, and war position of the governments. It is unfortunate that governments were allowed to use such a powerful source for incitement as they sacrificed their men to win a war.

The cooperation among Britain, the United States, and Australia benefitted from this advertisement. One of the most striking poster ad is the Australia has promised Britain 50000 more men will you help us keep that promise. 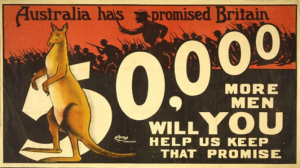 Collectively, the message and the typology used in this ad reveals several aspects of the nature of the World War 1. One is that it reveals the intense cooperation among allies. It is unheard of for a nation to heavily invest its human resource in the business of another state. The cooperation is brought out by the inclusion of British soldiers at the background. The military attires and military weapons used by the black-colored males were used by the British army during the war.

In terms of typology, hierarchy is one of the important elements used to convey the message. In graphical design, this element is the driving element that draws the reader to the important features of a design. In this case, the add utilizes font and typeface size to invite us to read what is most important. The impact of 50,000 and ‘you’ ensured they were designed with the level-one typology for their importance in the course. At the time, men were called upon to stand for their country to win the war. It was hence important for the design to elevate a sense of personal responsibility. Also, the use of different weights as a level-two element made it easy to distinguish the two sections of the text: ‘Australia has promised Britain’ and ‘50, 000 more men will you help us keep the promise’ for easier navigation.

The background features adequately supplement the purpose of the ad. The red background is a consequence of war, that is bloodshed. However, the presence of a kangaroo in an Australian poster elevates the fear of losing your life. According to the Australian culture, a kangaroo is a symbol of moving forward at all times. The animal was so important, that it was involved directly in the war to cheer up the soldiers. The organization of these two elements is splendid. The presence of a red background that represents blood is overshadowed by a vivid kangaroo that is important for the community. Despite the fear caused by the consequence of war, the inclusion of their cultural symbol may have acted as a convincing factor.

Despite the nature of the message in the text, the impression and application of typology elements stand out perfectly. All the elements of the message are organized perfectly in the visual representation. The importance of Australians in this cause was depicted by the kangaroo and its vivid display while their cooperation with Britain was represented by the on-motion soldiers.