Firstly, introducing Chinese character using a complete chapter, instead of categorizing all non-western letter inventions as orientalist letter and combine them in one small chapter, allows students to understand that there is a different character structure that exists in another culture system, and it has the same value as the English alphabet.

Specifically, the Chinese character and the English alphabet’s font construction system are very different in their composed method. “The critical departure from alphabetic writing is that Chinese writing does not reflect the segmental structure fundamental to alphabetic systems ” (Perfetti132). In another word, there are 1584 different scripts in the database, each script is meaningless if people did not compose them together. Like the image below, a single word”Yong”is formed by nine different scripts

However, in the English alphabet, there are only 26 letters. Different words are formed by changing the order of 26 letters. In a word, the Chinese character is constructed by experience qualitative change, it transforms from meaningless strokes into a word. But the English alphabet is constructed by order change, before the word being formed, each letter can be pronounced. This knowledge should all be mentioned in the textbook, instead of on purposely skip introducing the character which is used by 1.2 billion people around the world (around 16% of the world’s population)(Perfetti).

Besides, the current textbook mentions the temporary graphic design works in China but described them as a style looking towards western cultures, such as the “Shanghai-style” which is a style of illustration which depicted Chinese women as white, however, the textbook does not mention about the reason why temporary Chinese graphic designs were being westernization, which is western people’s colonization in China since1840(Eskilson).

In summary, I think Chinese Character and ancient painting should be mentioned in the next edition of Graphic Design: A New History in detail. In the future, after students become graphic designers, the habit of seeing every culture and art form as equal and valuable is beneficial towards society, and human development.

I do not enjoy drinking soft drinks, but Coca-Cola is an exception. Coca-Cola as a company has a distinct and unique logo design. This design is very attractive to me as a consumer.

In my memory, the Coca-Cola logo always maintains the same throughout history. However, when I try to think about the specific look of the logo, what I can think about is only the contrasting colors of red and white along with its stylized font.

Based on Coca-Cola Journey, in 1886 after John Pemberton invites the drink Coca Kola, Frank M.Robinson who was a graphic designer, designed the first icon. He changed the

name “Coca Kola” into “Coca Cola”, he substituted the letter”K” to the letter “C” to make the icon visually looks more harmonious. The typeface for “Coca Cola” is slab serif, in which each letter has a very hard edge, and separate from every other. Frank thought that the typeface was uninteresting and did not express the characteristic of the product. As a result, he changed the typeface to the Spencerian script. This typeface that has a handwritten feel that was not present in the previous font. The script includes organic lines that connect the words in a fluid manner (Coca-Cola Journey).

Before I studied graphic design, I thought that the success of  Coca-Cola’s icon was due to coincidence, the icon was luckily loved by costumers when it first came out. However, based on the research, I discovered that the iconic design of Coca-Cola experienced many changes. In the nineteenth century, the competition in the soft drink market became intense. As a result of this competition, many companies like Coca-Cola wanted to create a logo that would not only attract customers, but would also differentiate them from other brands. Gradually, the designs began to subtly change as the company experimented with different branding and style. From the nineteenth century to the twenty-first century, the logo had been adjusted for more than eight times. Specifically, in 1950, Coca Cola added a Fishtail frame at the back of its logo; In 1960’s graphic designer, Raymond Loewy, added a white curved line at the bottom of the logo to show a sense of flow. 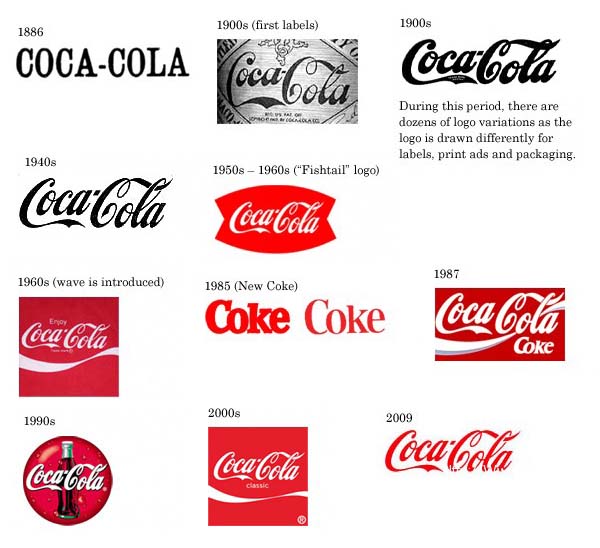 In 1985, Coca Cola changed the font style and called the new design, “New Coke”; however, this font style was not as successful as the previous design. After the backlash, Coca-Cola reverted back its design to the original(Fine Print NYC). In 1990 the designer added a classic Cola glass bottle illustration at the back of the original logo. After all these adjustments, Coca Cola decided to change its logo back to the most original and classic one, which is the typeface from 1886. After the 2000’s, the logo did not change anymore, however, the company still tried to change the color of the packaging while also adding new versions of the drink in order to target different consumers. For instance, the company introduced a diet version of the drink and briefly packaged a new drink in the color green to make their product seem healthier (Coca Cola Journey).

After knowing the history of Coca-Cola, you may ask yourself, “Since the logo finally went back to the classic design, what was the point of these decades of changing?” However, I think the process of these adjustments is the key to why Coca-Cola is so successful. All of the adjustments of the logo both reflect American history as well as the different graphic design trends. The decade adjustment of the logo makes the value of Coca- Cola becomes much higher than a soft drink; it becomes a similitude, which symbolizes fashion, history and revolution. Through understanding Coca-Cola logo’s history, as a graphic designer, I should be more critical about any logo I have designed. I have also learned that placing designs through a series of changes can potentially create a new meaning on top of the original logo.