A deck of playing cards contains 54 examples of graphic design. For example, the nine of clubs has a very simple design of nine black club symbols arranged in with symmetry (Figure 1). The card is designed to be able to be viewed in either orientation, explaining the flipped pattern on the bottom half – though it is still directional because of the odd number. The card also includes the number 9 written in the corner with a small club under it, and flipped in the other corner. This allows for it to be easily recognized when fanned out in the hand. The single colour design connects back to being designed for the printing press; the limited colours allowed for them to be made faster and cheaper. The Jack of Spades, however, shows two profile portraits of a male figure wearing patterned clothes (Figure 1). It is also designed to be viewed in both directions,  but also creates a balance because of it. Because his image is repeated, only his shoulders are shown. However, he still portrays royalty, since he represents a prince. His blue robes help demonstrate this, since the colour is similar to Ultramarine; historically, a pigment reserved for paintings royalty and saints (Mangla 2015). This card uses more colours than the nine of clubs, but is limited to primary colours, which are only used in face cards. 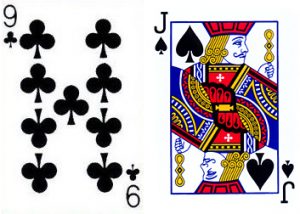 During the 14th century, Italy created a 40-card deck with 4 suits (swords, clubs, cups, coins) including cards like the king, queen and knave. During this time, playing cards were like books: hand-crafted, decorated, luxury works of art for the rich (Roya 2018). (Figure 2). Likewise, as they grew popular, cheaper versions came up with printing. Germany’s innovations in with wood-cut and copper engravings made them the front-runner in the playing card industry – since they could make cards faster than Italian paintbrushes (Romanoswski 2007). Though this control did not last because like always, the power of French culture happened. During the 15th century, the French designed their own suit system: hearts, pikes, diamonds, clovers; and designed graphic black or red symbols for them, which we still use (Roya). This improved the clarity of the design, but more importantly, meant they could stencil and print cards even faster than Germany. So, they created the 52-deck format (which we still use), illustrated historical figures on their face cards (Roya), and spread those all through Europe to take over the industry (Figure 3). That is, until taxes ran manufacturers out of the country, dispersing them throughout Europe again (Roya). From this, England approached card design with an idea: standardization! Previously, manufacturers created their own designs, specifically for face cards. But 1700s England, aka the industrial revolution, they decided to simplify and unify the design of playing cards across multiple manufacturers, making them cheaper to produce and easier to identify (Bernard 2018). The final design was created by Charles Goodall in 1860, which we use today. Goodall introduced the double-ended design, meaning cards could be read from either direction (Roya). (Figure 1). However, standardization removed all artistry in playing cards – until tax laws. Manufacturers needed to prove taxes were paid on cards before they left the factory – so they stamped this on the Ace of Spades. While they were at it, manufacturers also included their name and ornamentation (“A Breif History of Playing Cards”). This tradition helped in branding and is likely why English cards exploded, and why this is still done today. The name of English cards let them dominate, until 1800s American – who designed lithograph machines to print all 4 colours of standardized playing cards together. They took over the card industry by printing the popular English design (Romanoswski). So, plagiarism. But they got better; they later added many small key features of today’s cards. They rounded corners for easier handling, added Jokers and most notably, a designer named Bestock, added symbols to the corners of cards to indicate value and suit more easily when held (Roya). And this takes us to today.

Today, America still dominates in production, though with updated technology. Designs haven’t changed and often, the only things that does is the card backs – the artistry really hasn’t been the same since. There are exceptions though; Bicycle, an American card company, regularly releases limited edition designs for sets of playing cards, such as their Steampunk Goggles deck (Figure 4). These decks bring back the idea of playing cards as design, as they were in history, rather than just a manufactured product now. 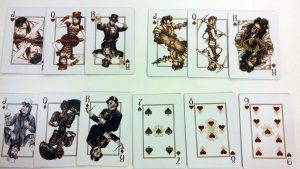 Romanowski, Perry. “Playing Cards.” How Products Are Made, 2007, www.madehow.com/Volume-4/Playing-Cards.html.

Roya, Will. “The History of Playing Cards: The Evolution of the Modern Deck.” PlayingCardDecks, 2018, playingcarddecks.com/blogs/all-in/history-playing-cards-modern-deck.