Cellphones have become a life partner to many, these cellular devices provide an instant line of communication, and brought upon the raised and popularity of text messaging. The text-based way of communication has many positives but the lack of an individual’s voice and its heavy lean on texts has made messaging sound robotic. So a visual way of communication has been created that adds a sense of personality and emotions and they’re called emojis! They are small images that range from subjects of facial emotions to food, flags, animals, sports, buildings and more. A popular collection of emojis that many have used is the Apple iPhone emojis. The Apple emoji family is called the “Apple Color Emoji”, this collection was released on November 21, 2008, on the iPhone OS version 2.2. (Burge. 2018) This was the first release of the current Apple emojis, but it was only available in Japan. There were 471 emojis in total release in 2008 and were created by 3 designers, Raymond Sepulveda, Angela Guzman, and Ollie Wanger. (Burge. 2018) In 2011, the update of iPhone IOS 5.0 was when the Apple emoji collection was available to everyone worldwide. Since the “Apple Color Emoji” are used by a large group of the public, the emojis must be clearly understandable in communicating its message, be visually pleasing to look, attract the users to use and be able to stand whatever size its view in, on the phone, tablet, computer and etc. From the first release of the “Apple Color Emoji” that was introduced in 2008, there have been different visions released since then. With each revision, there are changes in color, detail and even the style of the emojis involved to become more realistic. The colors have become much more vibrate and saturated as well as the enhancements in darker shadows all make the new emojis appear more realistic. The addition of more subjects such as skin tone, different family types, relationships, occupation and more has updated the “Apply Color Emoji” collection fit within the current times. As of 2018, there are 2776 total emojis that the user can use. (Burge. 2019) Emojis provide an alternative way of communication, they are a quick way of expressing what you mean through a visual image, they add personality and introduces a human touch to the cold cyber wall of text. 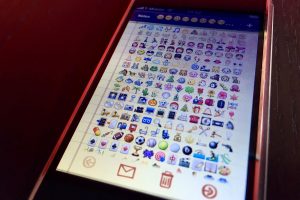