In the present, people mix different types of design styles and techniques to which makes their designs more personalized and interactive. People take all different types of styles and mix them to make it their own and to create a new look or trend. Contemporary designs can be reflected upon modernism since modernism was a style that was characterized by decisions to reject art styles of the past and experimenting with different new materials and techniques to make each design unique. The aim of modernism in graphic design was to create art that could reflect a modern society with uses of bold colours, simple shapes, and modern typefaces.  Comparing historical graphic design to contemporary design, there are similarities in the use of bold colours and simplistic designs to make it easier for the viewers to remember what the design was and to be easily recognizable.

Most logos in the present are made to be symbols and pictures that you could recognize in a second if you know about the company. Just like in the 1940s when there were war posters made for information distribution, they were made so that people could easily recognize each symbol and what they stood for. The Citizens’ Defence Corps Symbols poster by Charles Coiner is an example of a design that was made for the government who put out the symbol for people to remember easily due to the simple shapes and the use of bold colours to contrast the white page. Comparing this poster to symbols like Nike, Twitter, and Facebook, although they are not civil defence symbols, they are very recognizable designs that were made for people to be easily perceptible for those who see it. These logos are seen everywhere and many know what they represent and could be identified effortlessly. 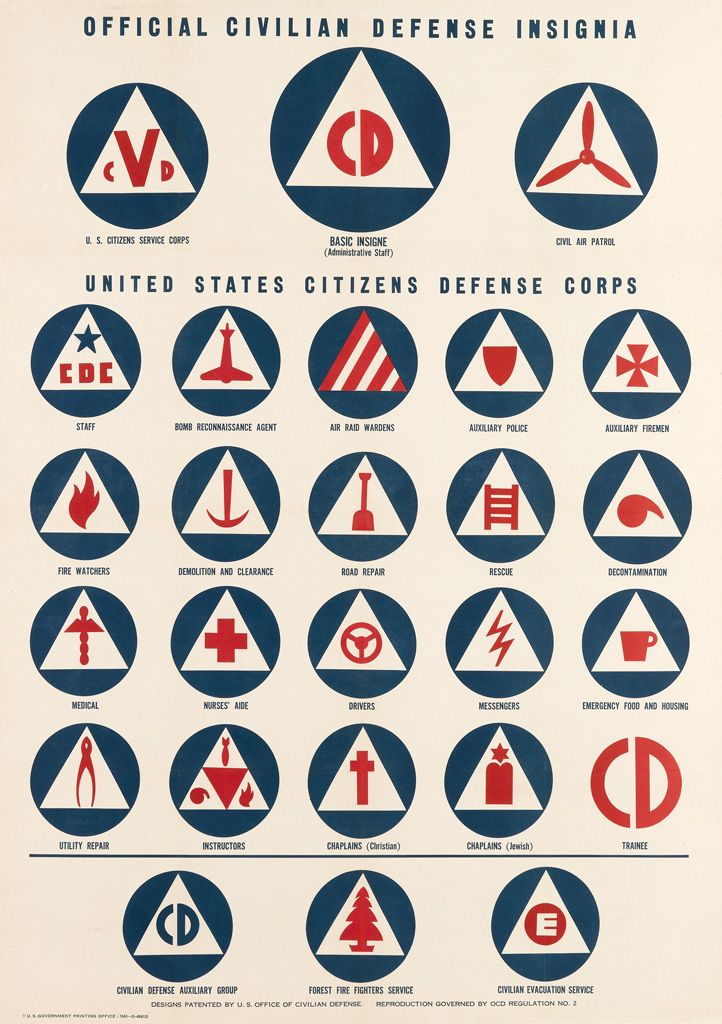 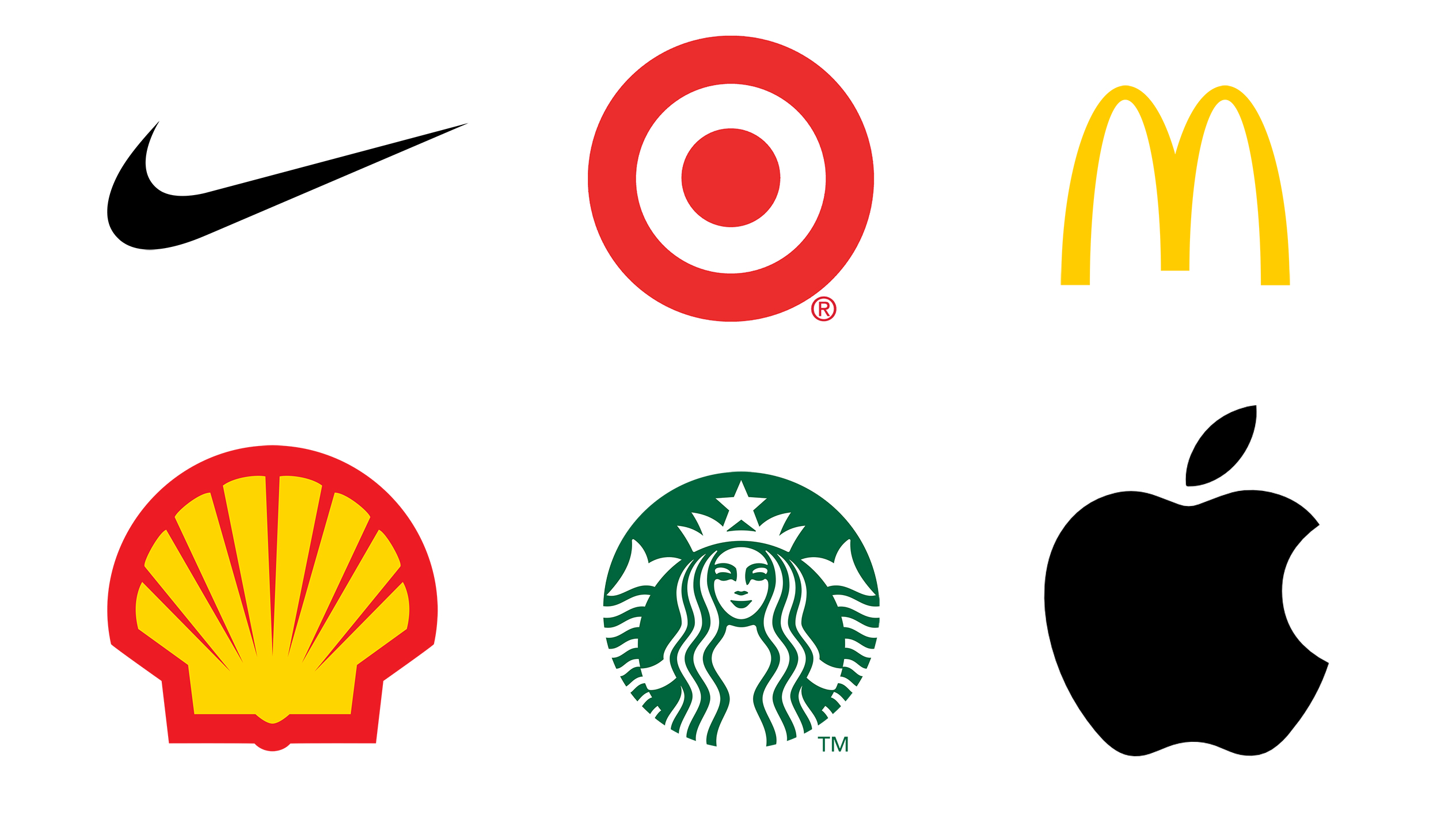 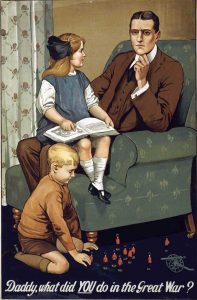 Q: These series of questions will be directed at Savile Lumley, who created the Daddy What did YOU do in the Great War? poster. This poster was created in England in 1915 at the start of World War 1. What gave you inspiration for this poster and what did you want to convey with this imagery?

A: Well, when the war first started, there were not many recruitment posters. When the government started to want large groups of recruitment volunteers, it was very difficult to do so. When thinking of what messages to convey to the people, I thought of something all men think of, which is their family. For many men, the responsibility to their family is something that compels them to volunteer. The powerful sense of duty to their family drives men to do these patriotic duties and this imagery suggests that in the future, their children would want to know what their father has done for their country and would want to hear stories about the war.

Q: That is fascinating, using family to recruit members is a very smart way of getting volunteers to risk their lives for their country. Why do you think they would do so? Wouldn’t men rather be with their families instead of giving away their lives and going off into war?

A: I believe that masculinity is very prominent at this time and doing something like going to war is something that is admired deeply. Risking your life for the betterment of the country is an action to be proud of. Helping out your country can gain you respect around town and can give one a sense of honour. When men go off into war, they think about saving their country so that their family can have a good life. They think about how their family would be if the war had ruined their country which also leads to death and destruction. I doubt many men would want that for their family so risking their lives for their country is a way to protect them from the bad so they can have a good/better life.

Q: I can see what you are saying, but how is this poster effective? Is it not just bullying men into joining the army to show off their masculinity and to prove that they can do it? It seems like it is manipulating people to join.

A: You could say that, but it is all from a good place. The government needs these men to fight so our country can stay safe and free. If there was no one to fight for us, we wouldn’t have been where we are now. I believe it is okay to do subtle manipulation for the better gain of our country. The poster indicated a scenario where the father is uninvolved in the enlisting of the war where he has not volunteered and chose to stay in the comfort of his own home, hiding from the war in a sense. The man in the poster depicts a sense of cowardice and shame since he did not go to war and chose to stay home instead. These characteristics are not manly and men like to show that they are manly. This poster challenges the British fathers to go to war to protect their families and country which again, shows off their masculinity and can prove themselves worthy.

Q: Can you talk more about your poster? What does the little girl and boy indicate and what messages do they bring? Why are they in the poster?

A: The little girl that sits on her father’s lap where she is reading about the war. She is the one who asks him “Daddy, what did you do in the war?” and the father is shown looking out to the audience with a gloomy, sad and blank stare since he has no answers for her. Reputation is very important for men and especially for fathers so when his daughter asks him what he did for his country, he has no replies. Most men want to be known as good fathers and heroes for their children and they want to raise their children to have good morals and standards. The poster implies that men who did not go to war will have a bad reputation whether it’s with their family or friends. Men who go to war will be a good role model for their children. While the little boy is at the foot of his father playing with toy soldiers that represent the future generations of soldiers in the family and how the boy believes that his father was brave and a hero because he was a soldier (which is not true because his father did not go to war). Fathers are role models for their children, especially for the boys. Fathers inspire their children with whatever they do and children look up to their father and remember what great things they did in their life. The father in the poster has not done anything great to be remembered for since he did not go to war.

Q: Lastly, could you expand a little on the colours you chose for your poster and what they mean? Why did you choose this colour set?

A: I chose colours that represent wealth, luxury, and comfort. The colours show the fathers cowardice and how he is living in comfort while there is a war happening. The family’s wealth shows the viewers that the fathers thought process of joining the war was decided on how comfortable he was living and how he did not want to give it up to go risk his life. From the vivid colours, it shows that luxury and wealth make men soft and ti challenges viewers to think of questions like “Is the father able to stop being a coward to go out and protect his family?”. The look on the fathers face shows lack of enjoyment to the luxury and wealth that is around him and that his choices are forever branded into his mind which he will have to live with forever. The wealth that he stayed for has no meaning now. Big decisions matter and personal belongings are not enough to keep you happy. It’s the experiences that matter.