A bit of context on what I am interested in and the research question:

The Maker culture, DIY culture and Hacker culture are all centred around creating new devices as well as modification of existing ones. With the rise of open-source hardware and software, and the introduction of tools such as Arduino, 3D printers and Laser cutters, people with no expertise in these fields have become able to engineer their own solutions. The primary motivation for these communities is education and just sharing of ideas.

Co-creation is a fundamental part of the Maker culture. By just glancing at the people who identify themselves as makers and creators on YouTube, you can notice the amount of co-creation and collaboration that occurs between them. An example of this can be seen in the latest video of Simone Giertz, also known as the “Queen of Shitty Robots.” She made a video documenting how she converted her Tesla Model 3 to a Tesla truck, Truckla. She co-created this project with three other well-known YouTubers/makers (Marcos Ramirez, Laura Kampf, Rich Rebuilds and many other collaborators). Even though YouTube doesn’t provide any support for co-creation, the makers still find a way to co-create thought this channel.

For my project, I want to build a robotic arm that holds a 3D doodler pen. This way, I will have a 3D printer that communicates with the co-creators directly rather than through a computer. The robotic arm is to have two controllers so that two users could use it as a tool to co-create an object together. 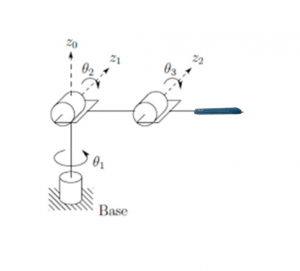 Just because my goal is to build this tool for maker communities, I want other creators to be able to create their own version of this tool easily. To do that I want to build the robot arm using tools and components that most creators have access to. I decided to use high torque servos and 1/8th-inch plywood for the robotic arm as they are both very accessible and easy to use for most makers. To get things started, I sketch the robotic arm and the dimensions of each segment. The next step is to design STL file now so that I can laser cut it. 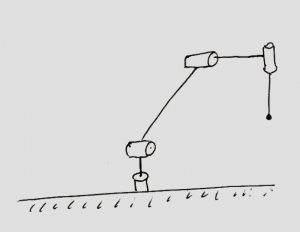