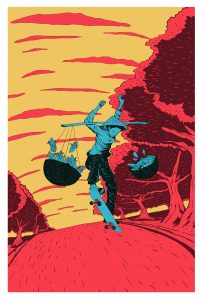 Artist Dúóng Giáp’s design work for his “Skate it up” skateboard deck series tackles the issue of the workers burden and the view of street arts within the general public. All the decks created in the series feature characters of the working class doing their respective flips, highlighting a question we don’t pose enough to ourselves. when does the policemen, the sanitary worker, or the farm hand find the time for frivolous enjoyments that we so easily take for granted? And should we not encourage it?

The stylistic choices used by Dúóng Giáp to address more serious topic of the working class having the burden of their duties sap the enjoyments of life in a lighthearted and visually appealing manor. The use of the poses taken by the figures illustrate action, and the adrenaline that comes with it. In figure. 1 the character actually carrying the burden of her work across her back in baskets yet still being able to launch herself into this flip communicates to the viewer that we can overcome the barriers of our minds. While in figure. 2 we have a policeman, the enemy of all skater, taking part in the very action that they would normally seek to interrupt and disband. This says to the viewer that regardless of our uniform we are all still just people who want fun in our lives.

The designs evoke a sense of the enjoyment and excitement in the viewer fitting the medium its printed on quite expertly, the skateboard being the idyllic symbol of childhood. The use of the vibrant and saturated palette working in concert with the flat blocks of colour speaks to a simpler more playful tone to match the subject matter of the illustration. The graphic nature of the illustration seeks to sway the viewers opinion on the act of and culture centred around skateboarding itself. The depiction of working-class figures participating in a culture so out of niche promotes a more all-inclusive and accepting environment. Simple smooth line work through the figures and the background elements create a fluidity and speed to the pieces simulating the experience and movement of the act of skating.

The designs take a visually stimulating and simplistic approach often associated with the street art culture surrounding skateboarding. A style of art known for its graphic and unapologetic nature and is often viewed in a poor light by older generation yet extolled by the new.  The designs appeal to a younger audience because of their rough uncut nature and communicates an idea subtly yet effectively to the viewer. Artist Dúóng Giáp’s work engages the viewer and succeeds in illustrating a simple yet powerful concept through a stylistic and graphic approach. 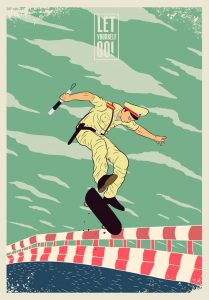