Package design is all around our daily life. When I pass through the MacDonald on the campus this week, the logo of it reminds me of its paper bag design. I do remember that they used to have different package design few years ago so I did some research about that.

The package of McDonald’s from 1955 to 1961 is the brand name with a little round head figure which holding a board. The company change the design in 1961, which is the year that the founders got all the stocks of the company(“History”). They get rid of the figure and make a much simpler design of the brand. They make a logo which like golden arches, also looks like an “M” which has a slash across it; Blue circle circled the arches and the name of the company. (Peterson). Since then the idea about the “M” as a part of the logo design and that design make the brand paper bag seems much more modern, unlike some town restaurant. They use that design until 1968s and avoid using paper bags for a while and restart to use paper bags start from 1983(Peterson). The paper bag at that time still is a white background based bag but they change the whole design since they have changed their logo. The logo of the company at that time already become the one we familiar today. Designer chooses to make the “M” become a pattern and place three lines of “M”s on the middle part of the bag with three different colours – yellow, orange and brown; There’s an official logo of McDonald below the patterns(Peterson). I think this design is pretty fun and the warm colour choice makes the company seems more approachable to normal civilian class.

In 1993, the design style of their paper bag becomes a little bit illustrative since it’s starting to show food on the bag again, and they change the material of the paper bag might because it’s the year they start to have McCoffee or just brown paper bag is more stable. But the last design didn’t last for long because they changed their logo design during these two years and they redesigned the paper bag(Peterson). The design in 1995 back to a modern style but the colour usage made it still feel easy to get in touch. They have changed their paper bag design in 2003 and 2008 since the development of science and technology allowed them to put photos on it, so they do take kind of advertisement in order to get more people to buy their food. Maybe it’s because of the printing, they change the back into white based background again. They also introduce typography into their paper bag design and keep it in a modern style. The typography also showed their idea about what is great food to the customer, to convincing them by their burger again. They change their design to make it more illustrative in 2013, seems they consider the young generation are their market. The style it use is a little bit retro but the layout is still in a modern style, also the usage of typography. The illustration there showing their idea about what is good food and why they chose their product. They redesigned their bag again in 2016(Peterson).The paper bag they use now is a brown paper bag which have a big “M” logo which presenting the logo of MacDonald on one side, and the purple letter “McDonald’s” on the other side(Peterson). The design of the paper bag nor is back to a typography-base modern style, no illustration or photo showing on the bag, but the color choice for the name of the company did catch people’s eyes and makes me think it is a McDonald’s take out bag. 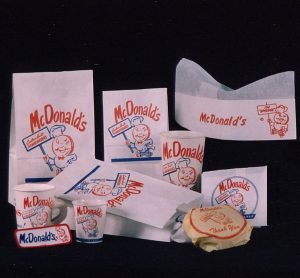 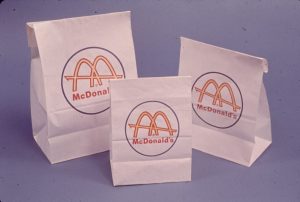 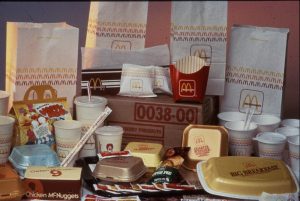 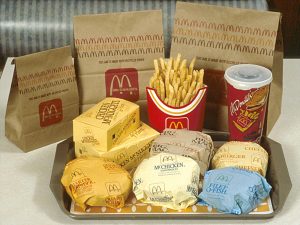 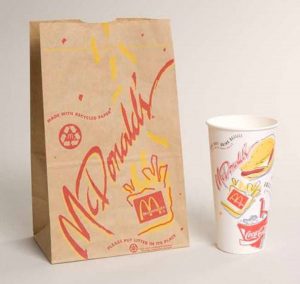 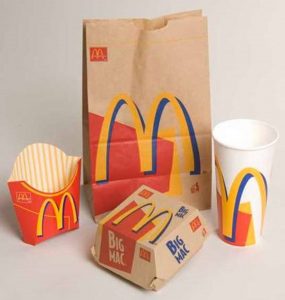 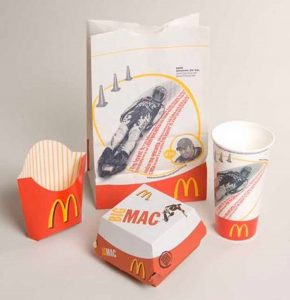 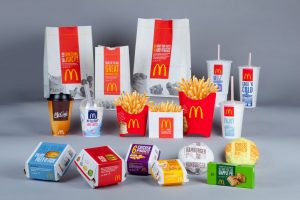 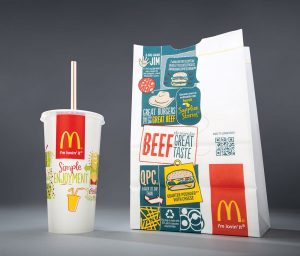 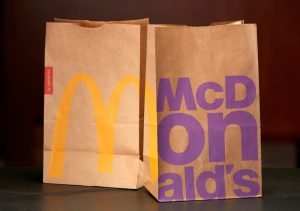