For my groups final project, we are making an interactive Twine Story based on love, loss, finding your road to recovery, (with a little help from a deck of tarot cards). 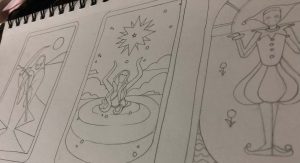 I was in charge of designing the tarot cards that would be included in our game, and I tried my best to blend the illustrative styles of all my group members together to try and create a more cohesive look.

Stylizing traditional tarot cards I mostly focused on having clean lines and basic shapes, similar to what you would find in a children’s book.

When we were asked to create a game sketch based on a personal experience, I was a hit with one of the worst cases of art-block I’ve ever dealt with as an artist.

My genre of choice has always been fantasy adventure games; give me a detailed storyline with interesting characters, a fantastical world, and unique gameplay mechanics, and you have one happy camper. So when I tried to think of some personal story to turn into a game, I felt like I needed to add some kind of spin on it- a twist to make part of my everyday routine something that will hook the player into wanting to dig deeper and play till the end of the game. But time was also a huge hurdle; this game was meant to be an exercise in scope, a short playable interaction to get our feet wet in designing a game from scratch. The ideas I was initially coming up with were fun, but they were very complex, and way over the time limit, so I kept on going back to the drawing board.

Looking for inspiration I researched a ton of different materials: comics, indie-games, even some personal-experience games that were posted on itchio, but what really clicked was Choose Your Own Adventure books.

I’ve always had lots of fun reading these kinds of books, and I realized that this could be a simple but still creative way to build my first piece of interactive fiction.

Now armed with a frame to build my game on, I started to write.

As i’m sure many others can relate to, I’ve had a lot of days where I have had to walk home from work after dark. As a female walking alone at night down a dark street, it’s easy to let the imagination run a little wild (especially if you’re also a true-crime podcast lover). I started chatting with my friends about this idea that I had, where the player walks home at night, but instead of simply going home, they are stuck in a loop that keeps repeating until a certain route has been successfully played through. How and when the player will get home would depend on how they choose to react to certain events.

I play-tested this idea with three randomized creatures that the player could run into, but found that the story flow worked better with only one creature, so I proceeded to focus on this one storyline, and a particular dialogue loop in an effort to keep the scope of the game down. 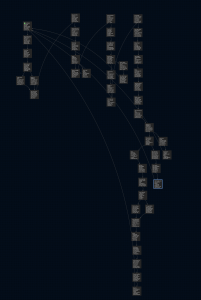 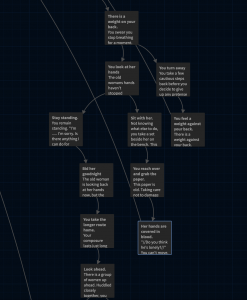 Using Twine’s simple visual flowchart, I started charting out passages, keeping the choices simple at the beginning, but more complex the further you got in the story.

While Twine certainly had what I needed to build this game, there were limits to this engine; because it is really built for text-based games, any heavy modifications you want come with the price of working against the tool, rather than with it. I knew the end result would be simple, but I still wanted to have an element of suspense, so the emphasis in this game was heavily placed on the script.

Play testing it again with two different groups (my friends and my classmates) I was happy to find that this game was a success! The gameplay fit neatly inside the time limit I set, and all of my players told me how they felt on the edge of their seat, curious but nervous to see what the consequence was for each choice. I personally felt that the “good ending” fell a little flat because I was rushed for time, and I would like to flesh it out a little more when I have more time.

I was also asked if I would be adding any sound or visuals to the game, and the answer was “yes, eventually.” As i’m writing this, I have a sketchbook full of illustrations for this game, and I have been researching how to embed audio files into Twine.

Updates will be shared eventually!!

An open-world fantasy adventure game that has beautiful graphics, a detailed story staring a cast of unique characters, AND an action-based battle system??? Truly a game that goes straight after my little RPG-loving heart <3

We were asked to try and create a subversive gameplay experience, but with a game that is so open to exploration, I was stumped. There were just so many options!

Wandering around the Teyvat, I started out by devoting my time to unlocking new recipes and become a gourmet fantasy chef, instead of working my way through the main story quests. There was a drawback though.

You can’t craft your own recipes from scratch like in Breath of the Wilds, instead you can unlock and purchase them after reaching certain level milestones. While the game offers a small element of chance when you cook -ie. if you cook certain foods with certain characters, you have the chance of crafting a special dish.

A short example of how cooking works in Genshin Impact

So I was back to square one, running around trying to find some sort of glitch or game mechanic that I could play with, and then I noticed the idle animations.

Watching these idle animations you can learn a lot about a character’s personality, and this is a really subtle touch I love finding within video games.

One character whose animation I really adore is Xiangling – a travelling chef from the nation of Liyue who specializes in cooking with strange ingredients.

I ran around Teyvat with Xiangling as if we were members of a travelling circus act, making sure to hit the main city hubs and any picturesque locations that could be found on the map.

One thing i find wonderful about this game is how unique each character is, and I had a lot of fun finding places to highlight each of my characters personalities by focusing on they’re idle animations.