The Artist Body and Technology 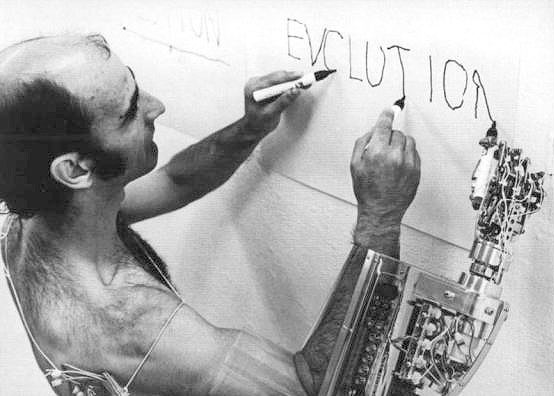 How can technology transform the human body?

For many years artists and designers have pondered this question. An artistic examples of what happens when people improve the human apparatus with the aid of technology can be seen in this image of performance artist, Stelarc, whose work focuses on extending the capabilities of the human body.

The Third Hand (1980) is a piece of robotic performance art that became one of the most popular work from the artist. His “third hand” is made of cast latex, aluminum, cables, and a battery pack and worked by picking up muscle movements from the legs and arms. One of Stelarc’s main themes and concerns was the inadequacy of the human body, and how computers are such a major part of our lives. In the early ’80s, Stelarc was predicting the future of technology and saw humans and computers as growing and living off of each other. Was he onto something?

It is now 2015, and this exploration has been dubbed “hacking the body”, that is to say, extending our senses beyond the limits of human nature.

According to this recently published article from the Globe and Mail, Why Toronto is a Hotbed of Wearable Technology, Canada is pushing the limits of wearable technology. And Toronto in particular has become a hotbed, experiencing a flurry of activity and curiosity in this area.

Featured in the article is Kate Hartman, an artist and assistant professor at OCAD U in the Digital Futures program. In it, she shows that there has been a noticeable “flow between disciplines and industries in Toronto, and that a multidisciplinary approach is really something that wearable technology demands,” and that it would be “impossible to pull off a wearable product without dealing with computing, electronics, and the business of how to actually put stuff on the body.”

Here at OCAD University, we too are envisioning all the possible connections between the body and technology at Festival of the Body, a month long series of events and exhibitions for the Pan Am/Parapan Am Games, which are taking place in Toronto in summer 2015. This festival also coincides with the launch of OCAD U’s new specialization, Life Studies, a program that focuses on contemporary studies of the body in art and science.

If you are in and around the Toronto area, check out these upcoming Festival of the Body events on our campus:

Panel Discussion: The Festival of the Body: Athleticism
Thursday, January 22
6:30 to 8:30 p.m.
Great Hall
A panel on art and athleticism as it relates to identity, ability and performance.

Panel Discussion: The Festival of the Body: Science
Thursday, February 5
6:30 to 8:30 p.m.
Great Hall
A panel that will investigate the threshold between art and science which is increasingly generative for the new specialization in Life Studies.