As we arrived to the waterfront, I was overwhelmed by the amount of people who were also strolling around the area. This was after we had gotten a chance to tour several parts of Mumbai, such as the Bandra Kurla Complex driving tour, to view the large commercial buildings, and then spent time walking along the Colaba Causeway for some eating and shopping. This gateway symbolizes the beginnings and initial layout of the foundation for trading and exchanging. It opened in 1924 under the British rule (1858-1947) located in South Mumbai and overlooking the Arabian Sea. It lies at the water’s edge in the harbor of Bombay, which we were able to view from the water, during a boat tour.

In earlier times, it would have been the first structure that visitors arriving by boat to Mumbai would have seen. I find this interesting because it is symbolizing the dominance that the ruling government would have over its people while suggesting an open and inviting gateway to cross under. It embodies the restrictions on entry and access to India. To give a quick background on the architecture, noteworthy design inspirations combined the Roman triumphal arch with 16th century architecture of Gujarat. This is a blend thatarchitect George Wittet decided to mix from Hindu and Muslim architectural styles.

Over time, there was a transformation of this place where governors and rulers used to land upon arriving in India, which became a place to reflect upon suppression by the British people. The gateway acted as a symbol of the power and majesty of the British empire, while opposite the gateway tourists can view the statue of Chhatrapati Shivaji Maharaj, the king who established the Martha empire by using guerilla warfare to spread pride and courage to the people. 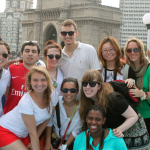 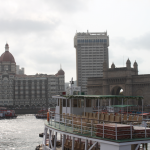 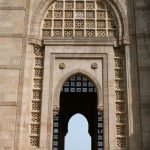 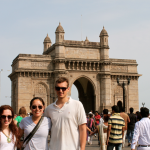 As visitors to this site, I can say that I felt as if this monument still held reminiscence of India’s history, although in a more positive and attractive way. The gateway was built and structured to look up towards the sky, although in modern times has shifted to raising your head up to maintain a positive outlook on where we now stand.