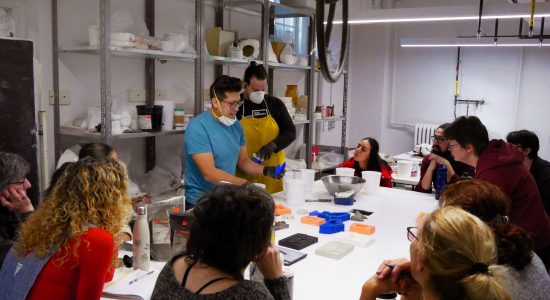 “Keep one eye on your passion and the other on the real world.”

It’s a piece of wisdom sculptor David Salazar received from his grandfather in Ecuador years ago.

It’s also sage advice the artist had a chance to share frequently with OCAD U students and recent grads last fall as the first alumnus participant in the new Creative Professionals-in-Residence program.

Launched last September, the professional residency program for OCAD U alumni is coordinated by the Centre for Emerging Artists and Designers (CEAD). During the fall and winter terms, the program intends to connect current students and recent grads with two successful alumni who each make themselves available to students for about a day each week. The two Creative Professionals-in-Residence for the winter term have just been announced.

“If you want to be an artist, how do you make it a reality?” asks Salazar. His studio practice focuses on hand modeling clay and fabricating sculpture. In 2017, he completed the Interdisciplinary Master’s in Art, Media and Design degree at OCAD U. His public commissions include 2012 Carnival, Rio de Janeiro; Spadina Museum, Nuit Blanche 2015 in Toronto, and, in the same year, two permanent public art sculptures in Georgetown, Ontario, commissioned by First Capital Realty Inc. “You can have a lot of fun with it, but you have to hustle,” says Salazar. The father of two pre-school children, he says art students also have to define for themselves what success looks like after finishing school.

In his mentoring role, he says he saw “a lot anxiety” when students start to envision what it may be like to be a practising artist in the world beyond school. “It’s not just eight to nine hours a day,” he says, adding he spends many hours applying for grants, commissions, and running his business.

“Go crazy about your ideas, but keep focused on what it takes to keep your practice afloat,” he says. Salazar also works as an exterior and interior house painter to pay his household bills.

Last fall, Salazar shared the spotlight with Mahmood Popal, a 2007 OCAD U grad with a focus on industrial design and fine art. In 2011, Popal launched MAAST, a design agency with a client list that includes Quantum Coffee, Danforth Music Hall and BrainStation.

Shellie Zhang, community animator at CEAD, says most university graduates, regardless of their area of study, experience anxieties about transitioning into the workforce. Nevertheless, she says how to best connect to the labour market “isn’t always as clean cut” for art and design students. Students can arrange a time to chat with one of the mentors who just started their winter term residency through the OCAD U Talent Network under the “Workshops and Advising” tab.

Student response to the new residency program was “pretty great” last fall, says Zhang. “It takes the intimidation out of networking.” 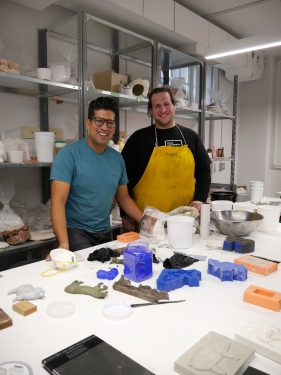 Ante Benedikt Kurilić, a fourth-year sculpture student, class monitor, and president of the Foundry Club at OCAD U, says talking to Salazar helped him envision his future as a practising artist.

“Everything is hard work,” says Kurilić, 27, who came to Canada from Croatia in 2013. He plans to do figurative art and public sculptures. “It has been very beneficial for me to talk to somebody who has walked the path,” he says about his chats with Salazar.

Meantime, when asked to define “mentoring” after teaching a sculpting workshop in the mouldmaking studio in the Sharp Centre last November, after a brief pause, Salazar says, “I think it’s listening, right?” It’s a skill he took to heart as a boy spending time with his grandfather and generously applied as one of two newly-minted mentors at OCAD U.

“I love sculpture, I dream sculpture, I breathe sculpture,” he says. “Students and new grads who want to be an artist have to balance their passion with frequent reality checks to keep their art practice afloat.”

Be sure to make some time to meet this term’s Creative Professionals-in-Residence! Designer Jessica Leong specializes in branding, environments, and typography, and Basil AlZeri is a cross-disciplinary visual artist whose practice involves the intersection of art, education and food. Book an appointment with them via the OCAD U Talent Network! 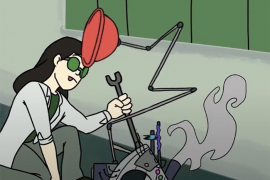 GradEx 105 highlights, picked by the professionals

One of the earliest decisions OCAD U had to make when the pandemic hit almost one year ago, was what to do about our upcoming… 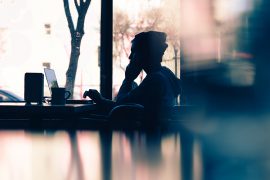 Use this time to prepare for your career

Guest post by Farah Yusuf, Outreach Coordinator, Career Development Centre for Emerging Artists & Designers While much about our day-to-day lives may be taking a…