For the digital creation aspect of this assignment, I used Google Blocks to create a basic 3D model. As a project from Google, I was pleased that my expectations of an intuitive and smooth experience were met immediately. The software lacks a 2D UI menu, which leaves all interactions directly built into the 3D environment – allowing for a seamless and distraction-free creation process. As a regular 3D modeller myself, I find the possibility of this new medium to be very interesting, however, the downside of this simplicity, of course, was a relatively boiled down feature set. The option for more advanced modelling tools (merging, loop cuts, rigging, modifiers) were understandably nowhere to be found. It appears that Google Blocks is intended to be no more than an introduction to VR 3D modelling, which leaves me curious as to whether an industry-standard modelling tool could be, or already has been, built for VR.

As it stands now, the process of creating a three-dimensional object using a mouse, keyboard and a two-dimensional screen has never felt ideal to me. Creating a 3D object demands a 3D workspace, and up until now we have been faking this space in a small 2D window for convenience. The VR modelling experience will surely improve as VR tech itself improves, hopefully arriving at a point when it will feel absurd to ever consider using a monitor. Perhaps this new medium is an inevitable next step in modelling software rather than a contingent alternative to its PC counterparts. 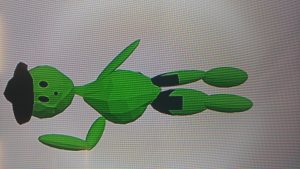 (not my finest work)

I’ve had the opportunity to play Beat Saber once before which left me excited to try it again in class. In the game, cubes rhythmically fly towards the player with indicators as to which direction they must be slashed by the two lightsabers held in their hand. My experience was fun and engaging at the “Normal” difficulty, discouraging at “Expert”, and reached a flow state at “Hard”. I noticed that perhaps to a higher degree than your average game, the enjoyment of gameplay was very much dependent on the difficulty setting – which had to be constantly considered and sometimes adjusted depending on the level.

While the success of the game speaks for itself, I do believe that Beat Saber is a very effective game that sits well in VR and could not be replicated outside of it. The sometimes sweat-inducing movement involved in the gameplay is a crucial aspect of what makes it engaging, aided by its consistently modern visual aesthetic and reliance on music. Another aspect of the game design that deserves praise is the decision to keep the player still. Because of the natural limitations of VR, I believe games that don’t involve the player physically moving far distances around the game world will consequently feel more immersive because, in reality, the player is confined to a very small space. Overall, Beat Saber is a prime example of playing to the current strengths of VR rather than overextending graphics and features and ending up falling flat.