Google Blocks gives a lot more freedom to move around in physical space and gives a higher engagement level when making 3D models. Selecting specific vertices or faces on the model is significantly easier to do in VR than on a 2D screen.

Although Google Blocks doesn’t have advanced features that you would find in a 3D modeling software such as mirroring or combing shapes, one interesting feature it provides is 3D stroke painting. Stroke painting can be a fast way to create leafless trees or other detailing assets for worldbuilding.

Importing the models into Blender and Unity was seamless and different parts were kept separate which could be easy to edit on a computer. The low-poly base can be converted to a smoother shape on the computer if desired. 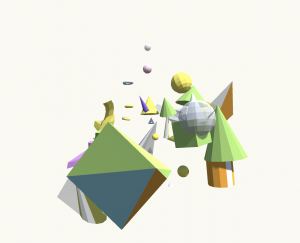 Overall, Google Blocks had an easier learning curve compared to other VR 3D modeling tools such as Oculus Quill. It is a great tool for creating simple world assets such as block skyline building, or highly detailed low poly creations.

Phone of the Wind 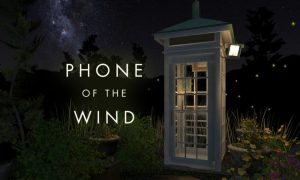 Phone of the Wind is an Interactive Film combining 360° video, 2D animation, and VR. It is centered around a phone booth in Japan. The activities of phone users are shown in the 360° video of the village. During the narrative of their lost loved ones’, the scenes switch to 2D animation; as the flashback to their lives with them. In the end, the player interacts with a 3D modeled version of the phone booth, replicating the one seen in 360° video.

The film combines the three variations well for a coherent storyline. There were fade-to-white transitions whenever the videos switched from 360° video and animation. However, the 2D animation and the 360° video seemed detached due to the extreme difference between the realism of the video and imaginary, dream-like illustration style. The last scene was a 3D modeled / VR reconstruction of the phone booth which linked it back to the 360° video smoothly. This is was a clear connection to the video scenes yet I feel the 2D animations were not as consistent in terms of the style.

The game design provided visual cues to direct the players in the right direction such as glowing pathways in the tunnel to lead in a particular direction. There voice acting was quirky and help the player figure out the narrative. There were also instructions and maps as props in the game as a guide. The player seems to be floating hence the up and down movement of the controllers was used to go smoothly float up or down in the game. However, rotating right or left was done with the joystick and was not as smooth. The game had a similar style and feel throughout which made it entertaining and easy to play.