After I got stuck at my first idea, which I wanted to create a doodle classifier close to the "DoodleNet" by Yining Shi, but I do not know how to capture the data from the canvas.

So I started to try different function in ML5 library. I tried with the styletransfer, but I even can not install the pipe Python. Then I found out I could do plenty of things with the PoseNet function. The "Food Chain Game" by Lillian Ritchie gave me a basic idea.

I decided to make a game also control by a nose.  And when I watched the Ml5.js tutorial videos by The Coding Train, I saw he is also teaching how to make different easy games. I choose to make a game just like Flappy Bird, but control by the nose. First of all, I learnt how to use the PoseNet function by look up the reference and watch some videos. Then I started to build the basic code for the game. It was not hard to build the basic code by watching the tutorial video. It is successfully to load the PoseNet function and change the control way from keyboard to the nose, it is not easy to control with the nose, but it is more challenging.

The game is too basic at first, there are no other things except a ball and pipes. I started to add some new stuff. I tried to add some images, like replace the ellipse with a nose with wings, but it was not loading any images when I open the HTML file with the browser. But it working when I use the P5.js Web Editor.

Then I add a Score function in my code. Otherwise, this game is meanless. The last question that bothered me was the game over screen I tried to add. The screen was not working so well at first, it just popped up for a second and the game just continues. Professor Adam told me I should stop the draw function when I trigger the game over function. It works pretty well now. 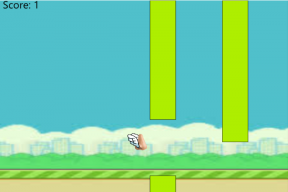 If I have more time, I would like to add more stuff to make it looks better, like adding some sound effects. I think most things are working well, but I still want to complete the doodle project. If I could do that, I would like to make that link to the network, let it become a search engine. It will be fun to search for the thing in that way.