Facial expression is one of the most important keys for face to face communication, however being in an environment where masks are mandatorily required would take away one of the features of real life interaction. Some might also find it hard to gain recognition in a group conversation since no one might read the lips of the person initiating speech. 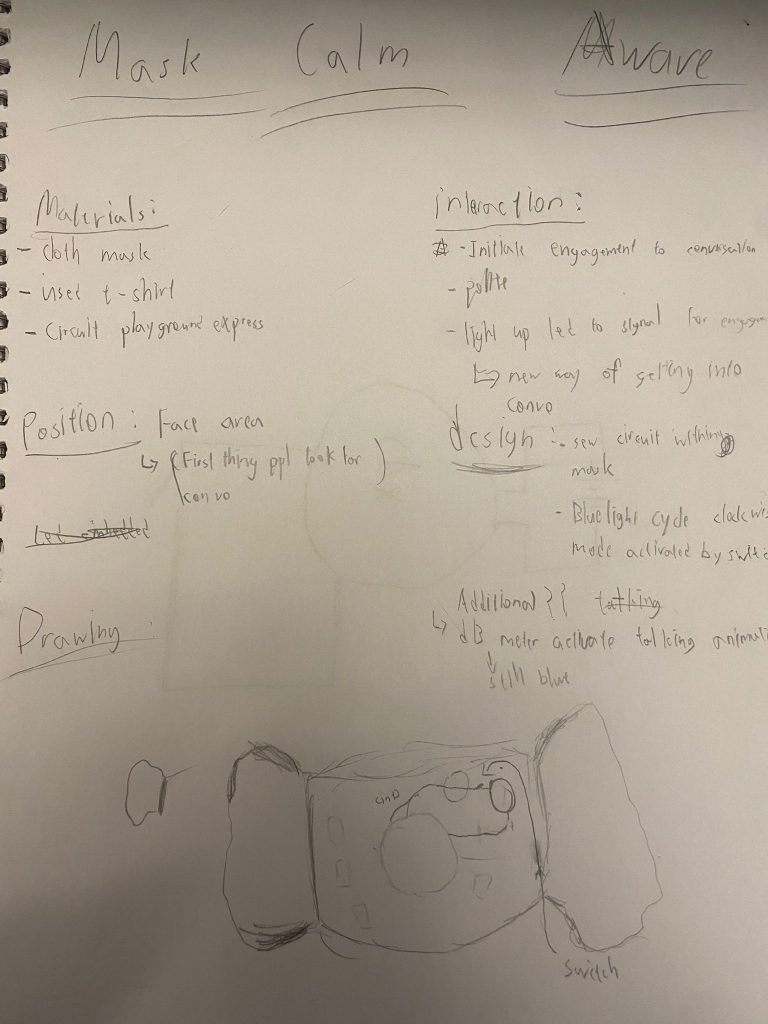 LOAD is a light visual presentation located on the mask. when activated by touching both sides of the conductive materials, it will light up a sequence of blue led light going clockwise for signaling in conversations/etc.  The main emotion for this prototype is that using blue light  would be the most suitable color where in Japan, police use blue streetlight to lower the crime rate. Also, by using slow led sequences to introduce calming sensation. 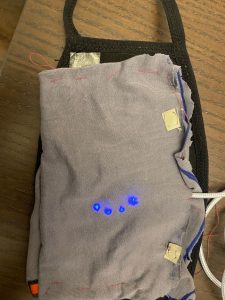 As schools start getting back to the in person days, it is quite frequent to engage in a large group conversation. As the person that was not preferred to speak voluntarily, there were things that I was aware of in a large group setting. Sometimes there were people who tried to engage in a conversation but were left out because of volume issues and hard to read the lips since masks were mandatory. The mask was to inform surroundings in a calm emotion while letting people know that you are ready to engage/have a point. In addition, this will be considered as an expressive prototype.

First I brainstormed about what I should make and by using randomized three words I drew from three tabs I got “Mask” as the cloth type, “Calm” as the emotion and “Aware” as the actuation. Then I drew an Idea of using circuit playground express as the main source of technology for the lightshow sequence. 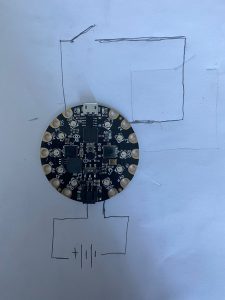 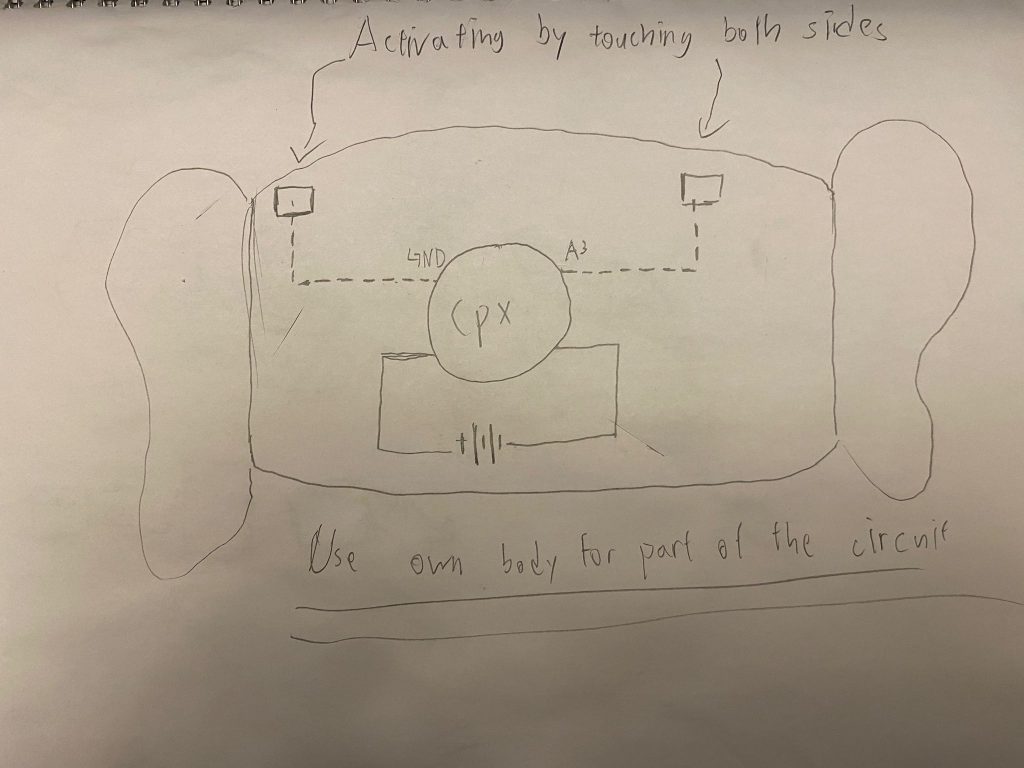 Once the design was drawn, I started to do the blue led light sequence animation from MakeCode.

Then I used clamp wires to test the circuit before I started to craft the prototype. 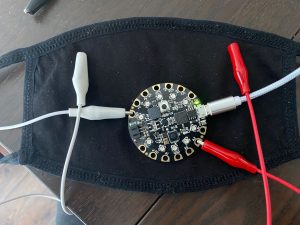 After succeeding the circuit test, I started to craft the prototype by cutting out a used t-shirt as the circuit board. Then the circuit was drawn and sewed with conductive thread. After the thread is well connected then I sewed the CPX secured to the cloth and covered the led with another cut t-shirt. I cut out two little pieces of conductive fabric and placed it on the top layer as the activate switch. Eventually the design was secured on the mask by threads and double sided tapes 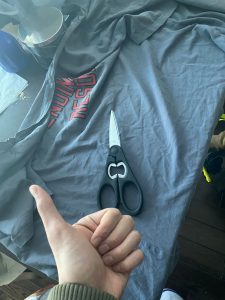 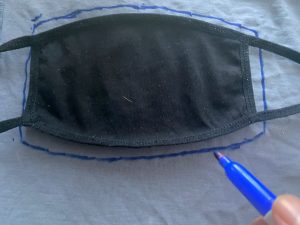 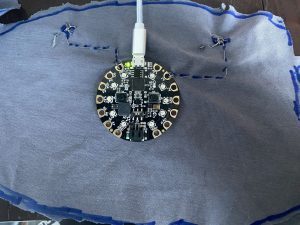 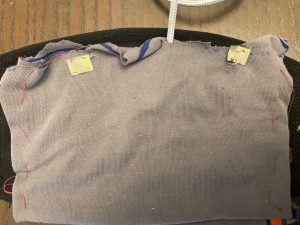 Since I couldn’t find a battery in time, I will be using micro usb to demonstrate the work: 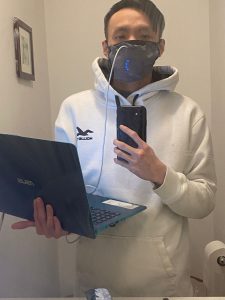 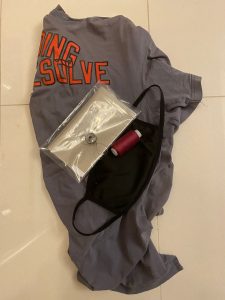 Reflection and Next step

From this project I can see more potential and the cons of the prototype. The light could be expressed in more ways such as different patterns to indicate different situations and could really use a battery for the portability purpose.

Also there are flaws from the design that I spotted in the middle of the creation. The clothing is not waterproof at all; any contact of water might get it  to complete the circuit itself without activation. Also, it means that the accessory cannot wear too long since the air vapor produced by nostrils might complete the circuit as well. Because the components are sewed in and taped with electronics, it makes the mask not washable, if I would improve the design I would use Velcro to secure the electronic parts so it could be washable. The prototype will be advised as an accessory means that a surgical mask is required to be worn underneath for Covid protection.

For the next steps, I would be more aware of the flaws that I spotted throughout the project such as convenience and durability/ maintenance of the product to make it more user friendly. There are things that could be done better such as molding a plastic layer for water resistance. Most importantly is to prepare more time for the project to patch the flaws of prototypes.

(Related work that inspired me, using expression as the main feature and combine practical use of it)