For this open project, there were many ideas I considered:

Hoodie: This hoodie would sense movement of putting it on the hood on the head, and LED’s would turn on behind the head to show less visibility of the wearer’s face.

Scales;  When the scales move, there is light detection that would have scales glow

Skirt: the pleated skirt would have LEDs at the bottom, and should brighten with movement

Arm Sleeve: This is the one I worked on, it would have conductive strips to change the colour of the LEDs.

Inspired by yu gi oh, duel sleeve. I wanted to create the idea of it as if you are placing a card down on your arm. It would pay homage, and be aesthetically pleasing.

I went for comfort, it was important to have the sleeve still flexible for the arm to stretch out all the way. I had to use the LED strips because there were no neo pixels available to buy. I had to keep the LEDs strips loose so the arm could move freely.

The wires would be insulated from the body underneath. And over top, so there won’t be any random shocking.

The conductive touch is on the arm for easy accessibility for the touch button or places that the cards go.

The placement of LEDs isn’t distracting to the user unless they look at their arm. 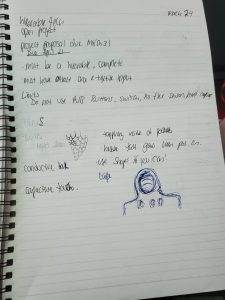 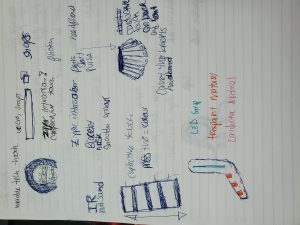 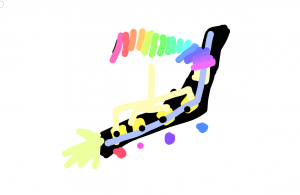 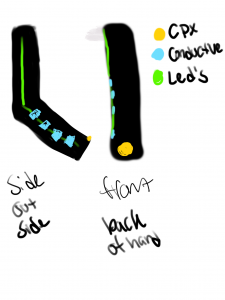 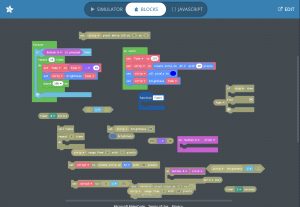 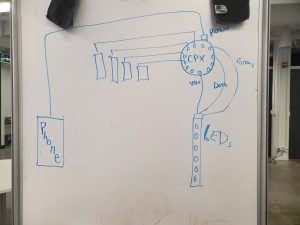 Overall I think this project was very fun to do, and experiment with the LEDs. I wish I had a chance to use the neo pixels, but that’s for another time. Using the hard to soft connection was difficult at first, but I used crimping beads to combine the conductive thread and the LED wires together. For the code, I thought make code would be able to detect touches at the same time, but it does not. I had to change up the code to true and false commands for when the fabric is touched. sometimes the hardware is a bit tricky to output the command but most of the time it works.

Another problem I had with this project was a short circuit with all the thread on the arm.

I would like to refine the sowing and use the thread. Making it look like a complete product. I would switch out the LED strips to neo pixels.