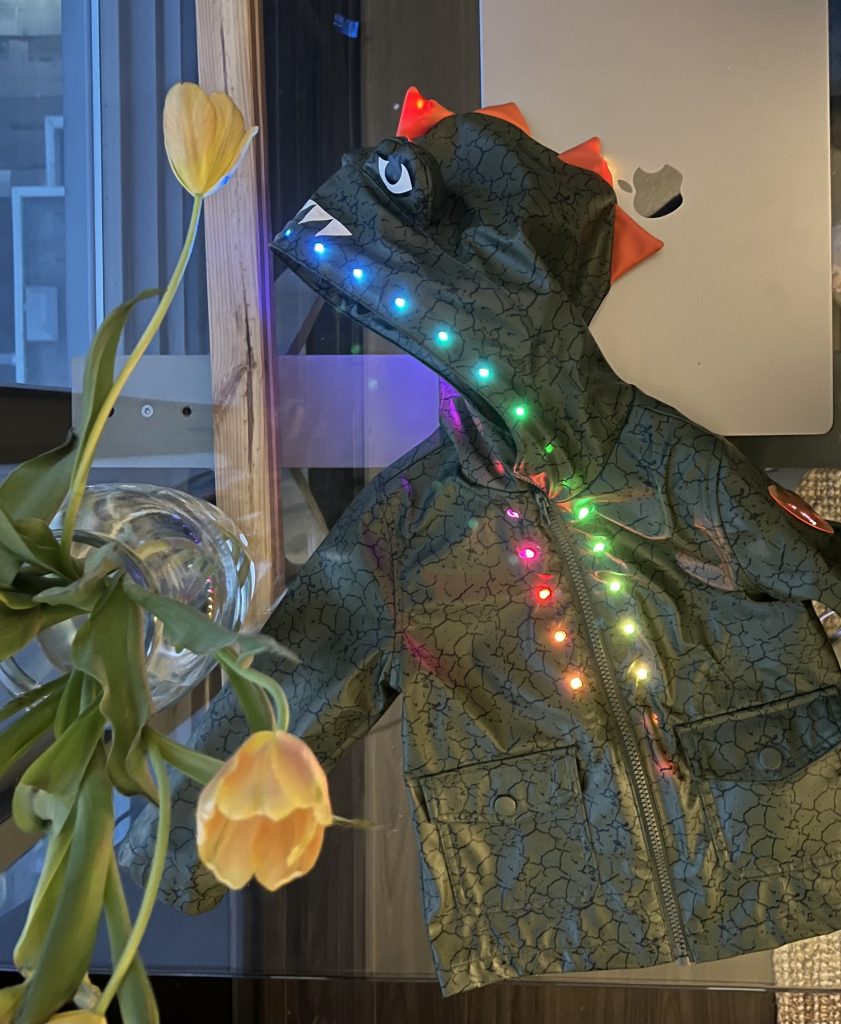 The wearable is a kid jacket/raincoat with pockets and a hoodie. I will sew conductive thread and fabrics throughthe jacket to connect all the circuit parts to each other. Components are Lilypad LEDs, a neopixele stripe, iron buttons, small battery pack. I’ve tried to design a special space for each component and cover them not to touch  bare skin and also design away so the battery could be charged without removing from the jacket.

The aim of the design “Distance Sensitive Jacket” is to keep a constant physical distance between parents and kids,  especially when they are in crowded places like a playground or a mall or even public areas like camping or the airport’s passenger section. As we know if we don’t watch our kids even for a moment they might go somewhere out of our sight and then we have to search for them with lots of stress and fear. My concept is to design a wearable that has a non-stop connection with both parents and kids so any time the kids exit the safe distance zone from their parents the gadget with the parent will alarm and notify them to look for the child at the moment. Also, the kid’s wearable starts flashing colourful lights so parents are able to recognize their loved ones faster among others. 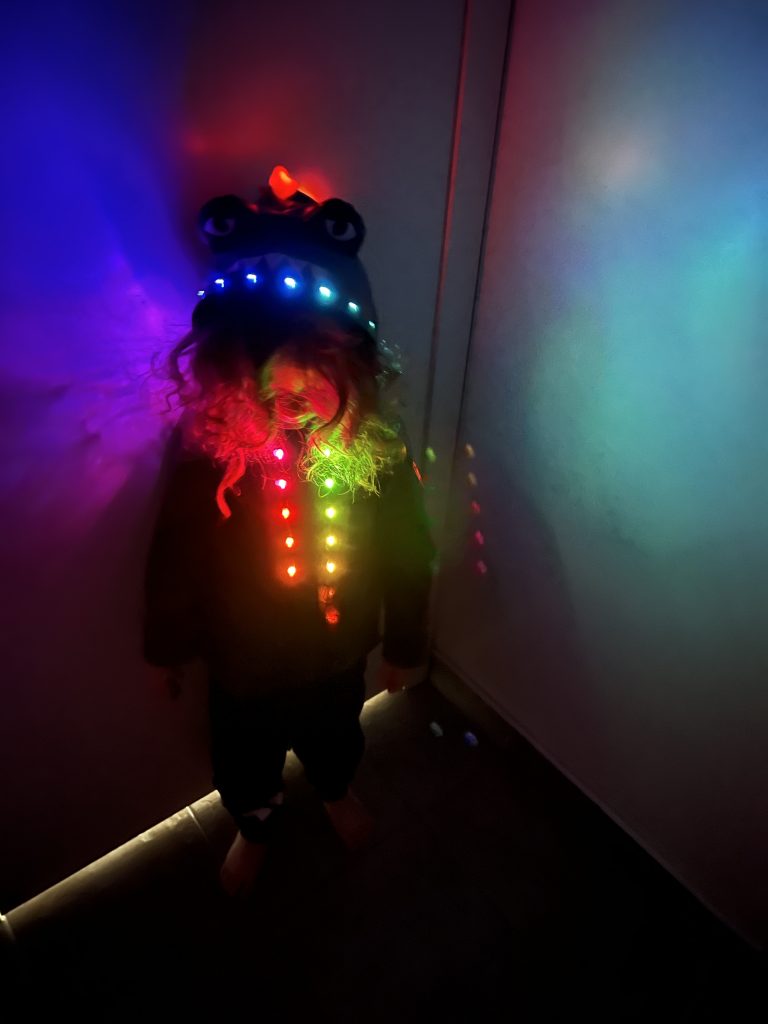 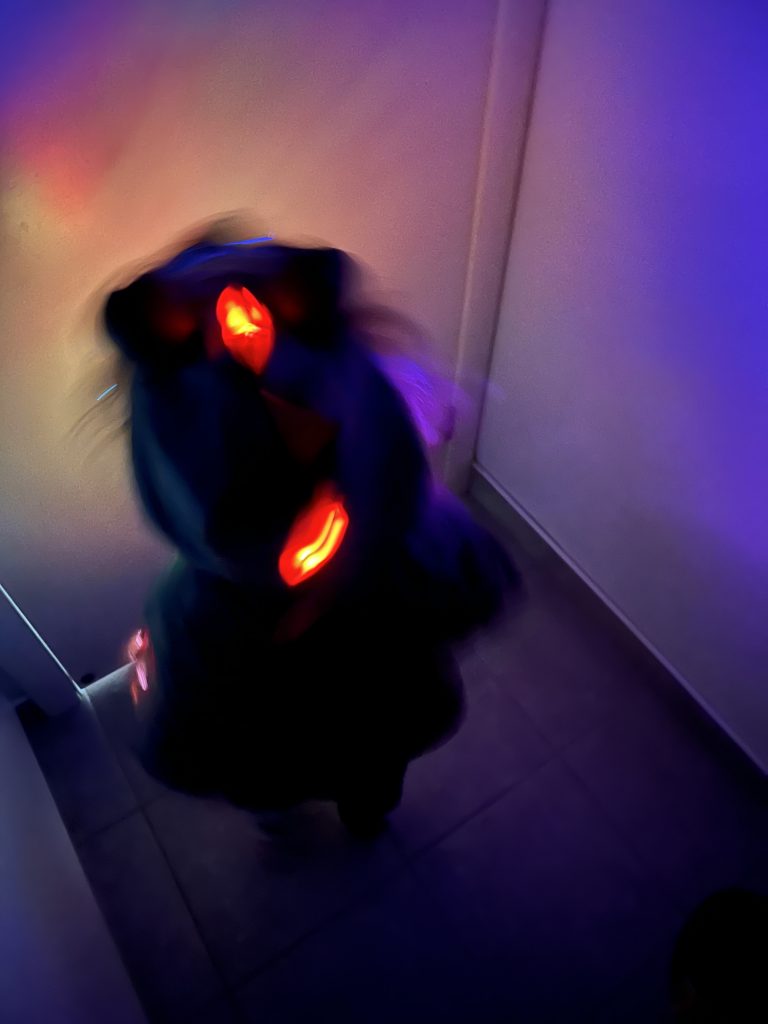 I decided to use a DIY switch as a starting point to start the circuit, for this purpose I used a metal button and set pull pin block to Make it work. So by connecting DIY switch to the A1 port on Circuit Playground Express and also to GND the circuit is ready to start. Before the circuit starts the pull pin is set up for the A1 port, and by closing the button which in my design it is located on the pocket the pin A1 status changes to “Down”, which is the start of sending signals via Infrared.

Inputs are A1 pin connected to DIY E-textile switch ON or OFF to start the circuit. infrared Receiver.

The scenario is to have a number or variable which each time infrared chooses a number and transmits it, the receiver will take this number and reacts. While interacting, both boards send and receive signals at the same time and create a cycle to stop the warning lights and sound. 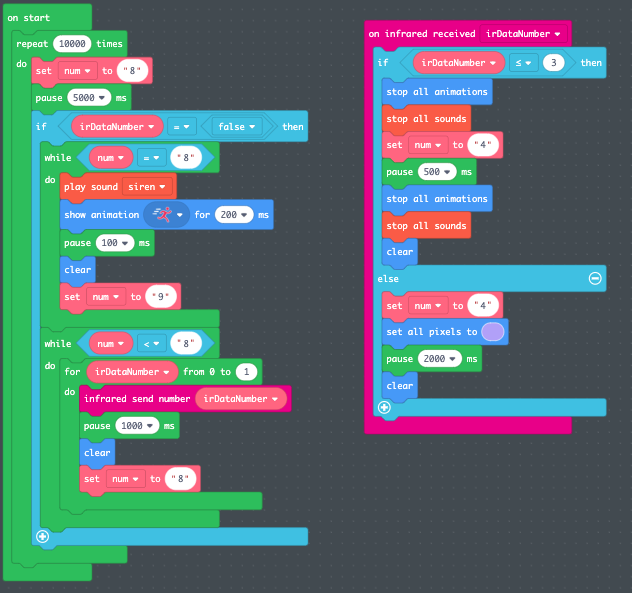 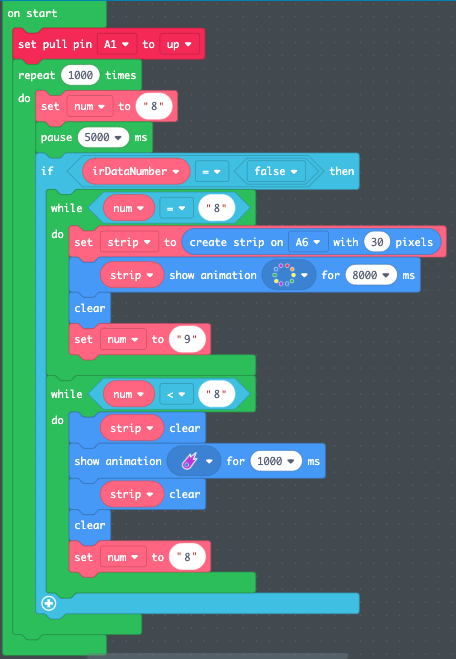 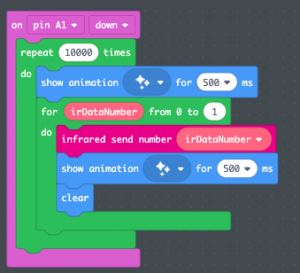 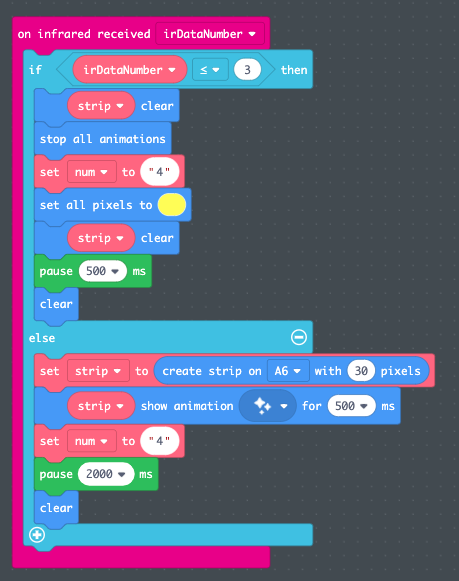 Also for each transmit and receive cycle a fixed number is set so each time in transmitter and receiver boards this number will be set as default and if no signal is received by the board then the board will react to this fixed number and starts the alarm actions. I used a pause block to let the code check if a signal is receiving or not. In future I will try to use the javascript “delay” or “wait” function for a better result.

So I decide to make strong insulation in my circuit. After exploring different materials I found a craft string that has a silky texter and round shape which makes it a good choice for use as a cover for the conductive thread.

First I fixed the Circuit Playground Express on a piece of fabric, then I made my circuit with hand-crafted, insulated, conductive thread. The circuit has two DIY switches that I’ve used 2 metal bottoms to make them.

I’ve embedded a Neo Pixel LED string in the edge of the jacket. I’ve made some holes to make individual LEDs more visible.

In addition to the LED string, 2 lily Pad LEDs are embedded on the jacket’s hoodie.

Also as I’ve used the inferred function of the Circuit Playground Express, I needed to use two circuit playground Express controller in my design(one of them embeded in the jackets sleeve and second one would be with parents). 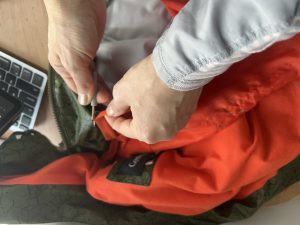 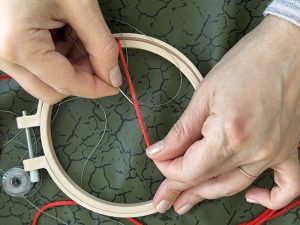 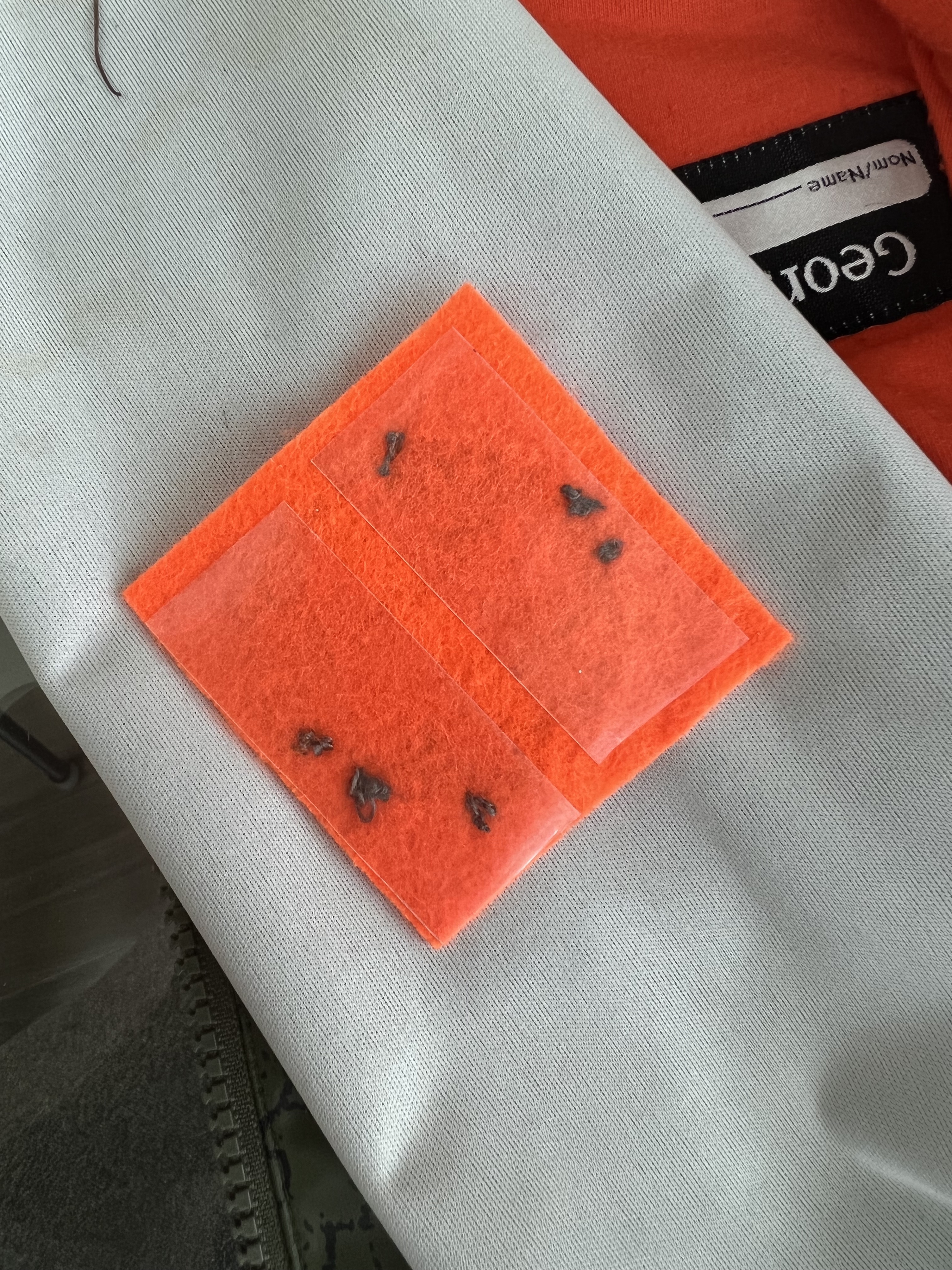 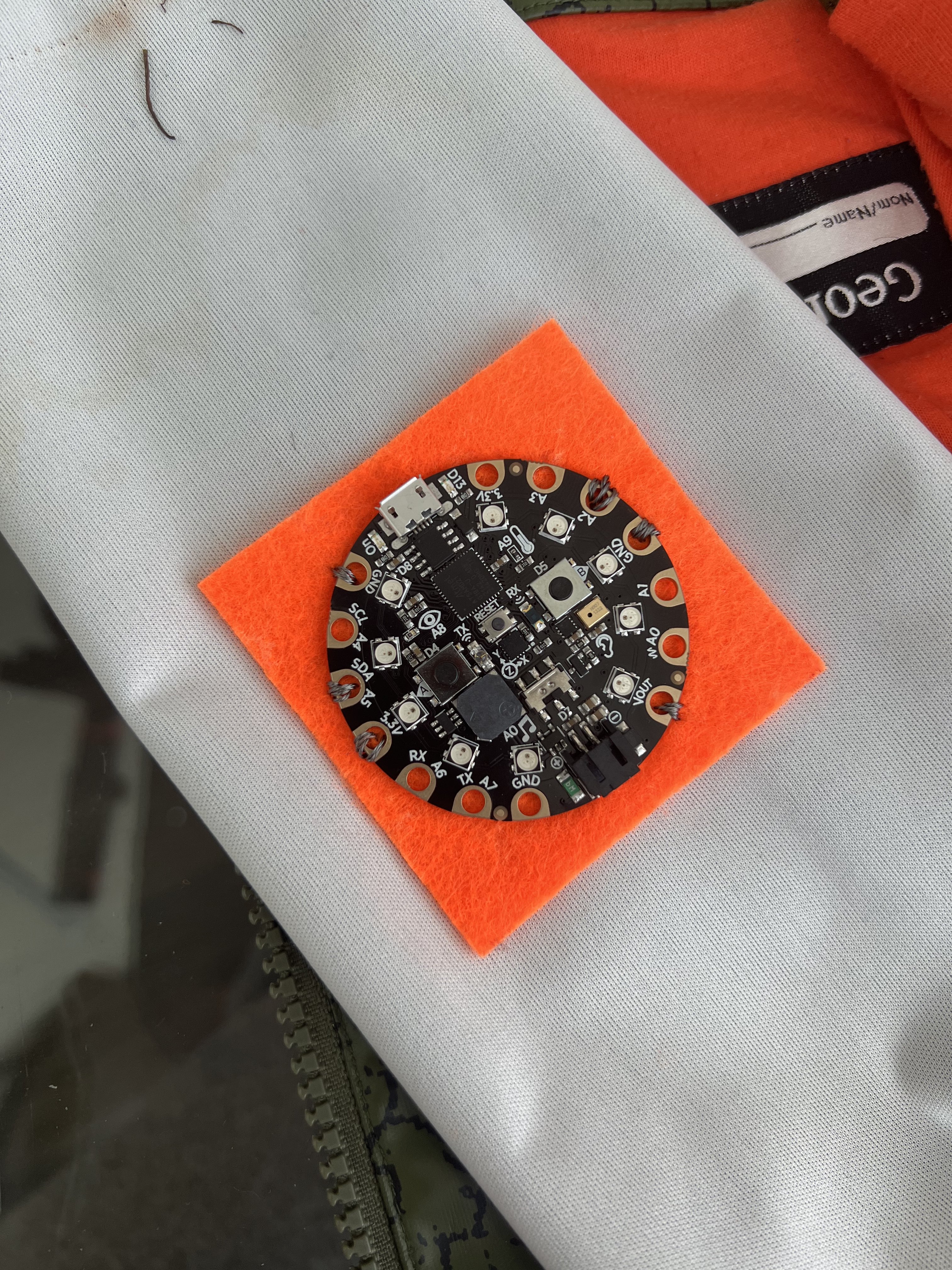 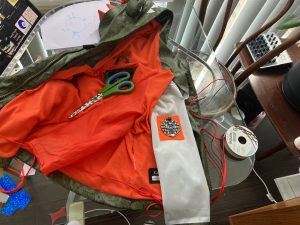 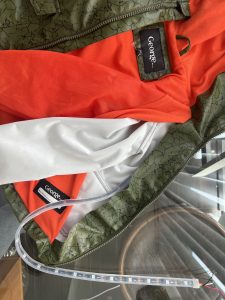 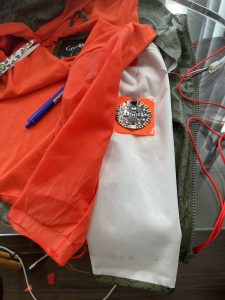 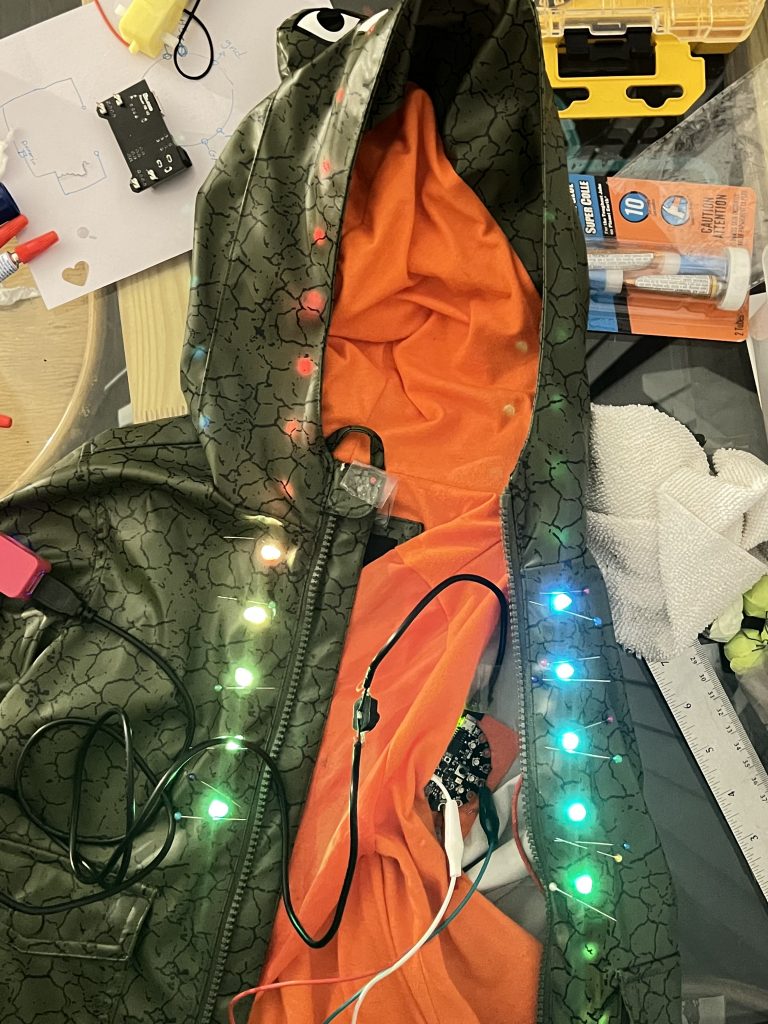 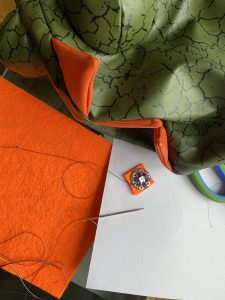 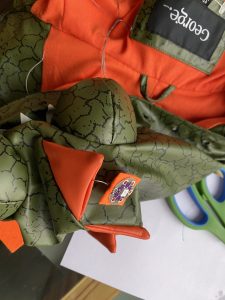 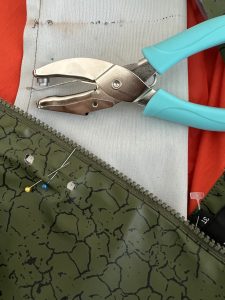 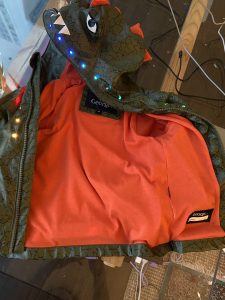 Video of the prototype in action :

My Expressive wearable is a wristband that responds to its owner’s position due to her/his feeling to their environment. it has three different modes associated with three different positions that are associated with three different feelings. According to body language psychological facts, when one or both arms are crossed, it may be a way to create a barrier as a subconscious attempt to block something that we feel is threatening or if we find ourselves in an undesired situation. People usually cross their arms over their vital organs such as their heart and lungs so that they do not suffer any damage. This strengthens the idea that crossing one’s arms is something innate (monkeys and chimpanzees also cross their arms to protect themselves against frontal attacks). Thus, when someone feels nervous, negative or defensive they often cross their arms to show they feel threatened. Inspired by these facts, my designed wristband will demonstrate red light and play a noise when its owners puts their arm in front of their chest. In contrast, if they are having fun and interacting, they will feel more relaxed and it may not be so comfortable to hold that position. So in this situation, when they keep their arms beside their bodies the wristband mood will change to rounding rainbow lights which mean its owner feels happy and comfortable. In this mode, the owner can request help without verbal communication, By touching a located sensor on the surface of the wristband, it shows blinking yellow lights. For taking advantage of this mode, user should review the signs of wristband with a reliable friend. So any time they recognize the wristband is yellow, it means its owner needs help.

experiencing long pandemics and quarantine makes us more sensitive (conservative) to go to social environments like parties, Club or restaurants. Expressing these kinds of feelings is so complicated. So, my objective in designing this wristband was to help communicate with each other in a new creative way that gives us more confidence and a safe feeling. These feelings of safety and confidence may help us to transit more easily to normal life

How I made it and Process Images :

This project turns the Circuit Playground Express (CPX) board into a wristband that responds to its owner’s position to express her feeling.

I’ve used built-in LEDs and a speaker of the Express (CPX) board and for programming, I’ve used Microsoft MakeCode blocks like on start/tilt up/tilt down/ on shake and touch A4. In my scenario at “ on start” the “show animation “ and “set all pixels ” will run and repeat 2 times.

On “tilt-up “ pixels will be set to red and black with a blinking effect and then “ show ring” will come up with a “play melody .“  After blinking of red and black starts and repeats 3 times to complete the cycle,

On tilt down all pixels are set to white and black to make a while blinking effect and stops on“ show animation “.

while shaking the “ on shake “ command will stop all sounds and set the pixels to white, this process is for cancelling the cycle of sound and red colour from “tilt-up“.

on “ touch A4” LEDs will blink with yellow and white colour and the process will stop after 2 times blinking. One of my challenges was using a AAA battery pack to start the Express board. I wanted to use conductive fabric and thread instead of wires on the battery pack. The other challenge was calibrating the angle of tilt down and up so I can have the effect on the desired position of my hand. the tricky point was it is mattered that the wristband is worn on the right hand. the next challenge was the touch effect as in my design I attached a piece of conductive fabric and thread to A4 pin touch on circuit playground express board but sometimes the fabric doesn’t detect the touch, I noticed that some times when I breathe on my finger the fabric will detect the touch easier.

At this stage batteries didn’t transfer power to the board properly so I removed them and replaced batteries with a battery pack and also add a touch sensor and again attached two parts.

link to the Expressive Wristband video:

Reflection and next steps:

Working with the Circuit Playground Express board and making an expressive wearable was a great experience. The size of the Express board that is thinner and smaller in comparison to many other controllers makes it a great choice for work with wearables. it gives us chance to work with conductive thread and fabric that was like magic. also programming the Express board was much easier with “Microsoft MakeCode” block-based than programming Arduino Uno.

As I’m interested to play music with electronic wearables after exploring circuit playground express board potential in both input and output aspects, my next step might be to make this wristband closer to a midi wristband.