Since the beginning of the COVID-19 Pandemic the new norm became working from home which led to monotony during the lockdown period. Despite the slight semblance of normalcy of being able to go to work or school in-person we have slowly adopted the work from home notion as it has been popularised over the past two years. Touch Music – Work from Home Edition is the extension of a previous project I did in the Creation and Computation studio class back in 2020. The project explored capacitive sensing using and Arduino Nano 33 IoT connected to a capacitive sensor which was attached to conductive material wrapped around a wine bottle. Once connected it was activated by touch and would display a visualizer that reacted to the beat of a song. 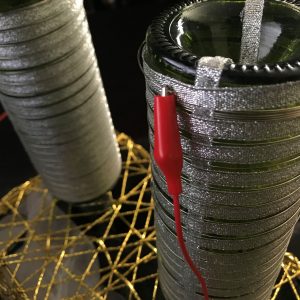 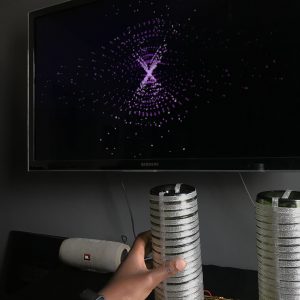 In this version of Touch Music – Work from Home Edition, I further explore the concept by designing a wearable sweater that is worn while someone is working from home. The wearable sweater has two capacitive sensors one on the left cuff of the sweater and the other on the back of the sweater and the idea is to have the sensor play different types of music when someone is studying or working and when they are taking a break. The capacitive sensor on the cuff is activated when someone is placing their hand on their computer while they are typing and plays focus music. Whereas the capacitive sensor on the back is activated when the user is taking a break and leans back completely on their chair and the music genre changes to the users’ preferences. The wearable is intended for use by people who work or study from home and enjoy playing music while they work.

The Bose SoundWear Companion Wearable Speaker (Bose n.d.) is one of the inspirations of the Touch Music project. The wearable speaker is designed to be worn on the neck and offers the best of both worlds’ portability and great sound output. The speaker is well designed and sits comfortably on the neck and is great for people who work from home. The wearable has two speakers that are upward-facing and point toward the ears with good sound quality which is an alternative solution for hands free use such as answering calls while driving. While the wearable is not exactly designed for use in public spaces as it is a speaker and can get loud it has other potential uses which include use at home or in the backyard, taking a walk, speaker calls, virtual reality, and driving. Touch Music is designed for use at home specifically for people who work or study from home and spend most of the day using their computers. Like the Bose speaker the wearable sweater’s microcontroller is designed to sit on the shoulders of the user as it is unobtrusive and not distracting to the wearer.

Liquid MIDI is an experimental modular textile interface for sonic interactions, exploring aesthetics and morphology on contemporary interaction design (‘Liquid MIDI’ n.d.). It uses experimental textiles and conductive ink for the sonic interaction and is a tangible interface. The piece consists of textiles, screen printed with conductive paint. The paint creates a network of intersecting lines with pronounced circles at specific junctions. The lines are connected to an Arduino through alligator cables which helps it to communicate with a desired software, using midi protocol. Trigger pads and fader board are screen printed modules focused on AV performances, allowing the performer to build its set up regarding its needs. Sound is a medium that has been increasingly gaining ground in the visual arts during recent decades, despite this seeming contradictory (‘Liquid MIDI’ n.d.). Liquid MIDI relates to Touch Music which uses the concept of fusing conductive material on a fabric in this case a sweater to trigger a sound output when touched. The unique interaction of Liquid MIDI is foldable and morphable which allows for interesting uses and interactions where the interface becomes a part of the process of creation itself. 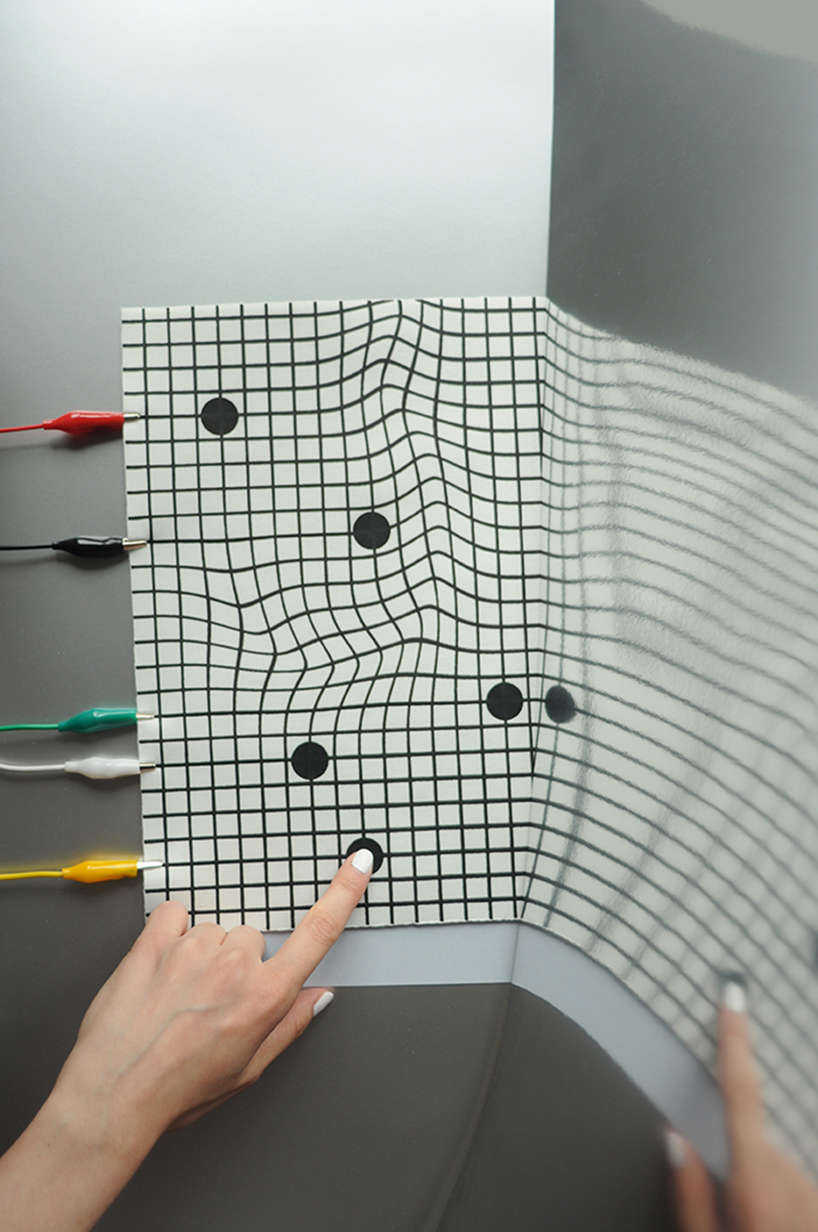 Woojer Vest is one of the most powerful haptic experiences it delivers high fidelity tactile sensation which reproduce the rich emotion of sound(‘Vest’ n.d.). The Vest Edge gives 360 degrees of immersion, delivering powerful and accurate, detailed sensations. The Woojer Vest works by pumping low frequencies of sound into the body. It is best experienced when playing games, watching movies, or listening to music. Thus, it would give you a one-of-a-kind audio experience that cannot be experienced with just headphones. It makes the experience of watching movies and playing games, especially with VR, much better (Sutton 2021). The vest is designed to be worn and plugged into a gaming console, headphones, or any other device that you want to use with the vest. It’s the perfect companion for at-home gaming, movies, VR and music. It’ll pump the low frequencies through your body, delivering a unique and mesmerizing audio experience. The idea of Touch Music is to introduce a different experience of working from home by adding an interesting interaction to clothing that allows the wearer to control music using the sense of touch. As it can be monotonous to see the same four walls of someone’s workspace the idea of Touch Music offers a way to liven up the work from home experience with the potential of exploration into other interesting interactions. 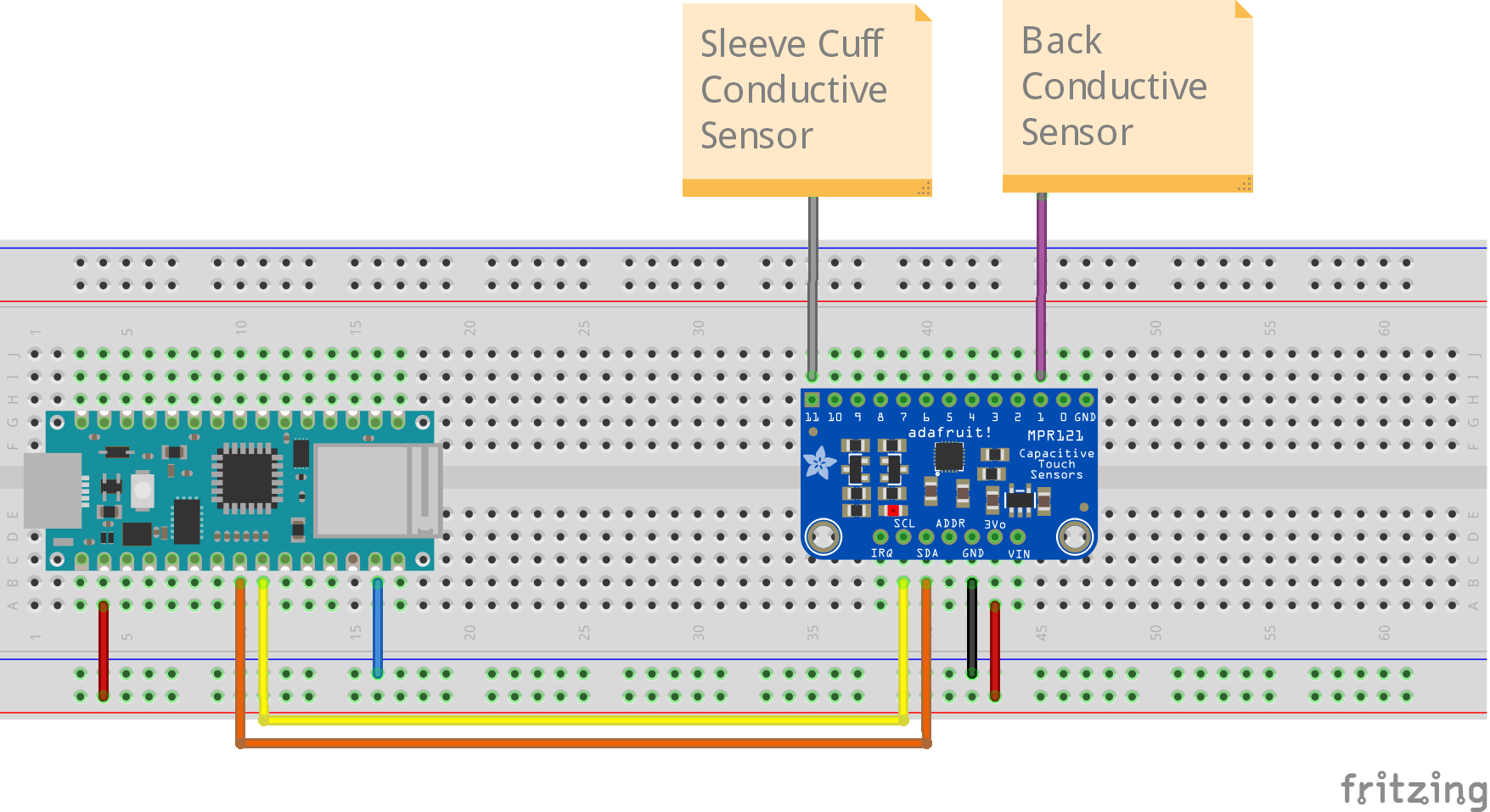 The wearable sweater was comfortable to wear for its intended purpose while seated it was comfortable and unobtrusive. While moving around or walking the microcontroller felt slightly heavy but was not very noticeable, the wires sewn through the sweater were not felt and stayed in place even while moving around. Based on Gemperle’s argument “The weight  of  a  wearable  should  not  hinder  the  body’s movement or balance (1998).” The construction of the wearable sweater is not bulky or heavy however it would be beneficial to use more compact electronic components in the next iteration. 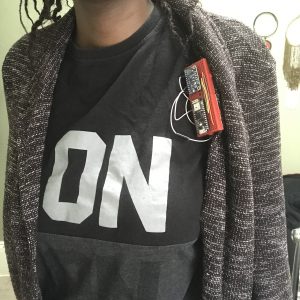 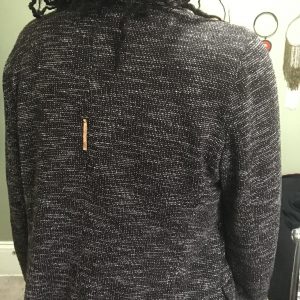 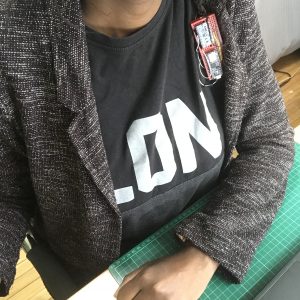 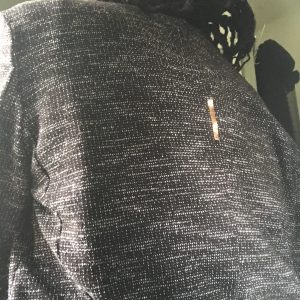 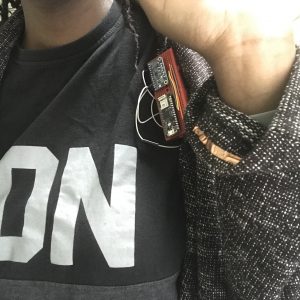 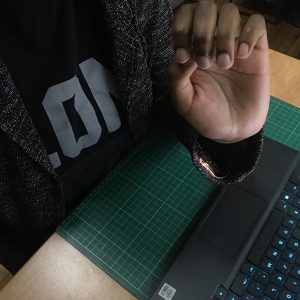 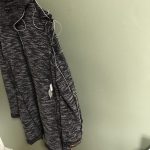 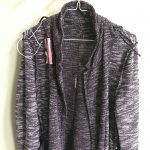 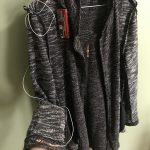 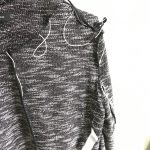 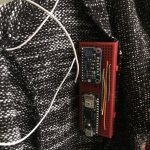 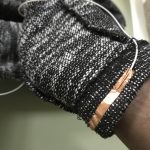 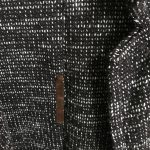 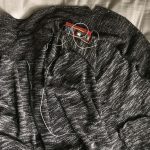 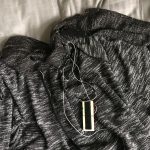 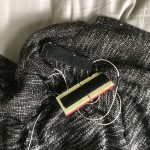 The wearable sweater was a fun project to work on some of the successful aspects was the code worked well and the construction of the wearable was easy to assemble. It was comfortable to wear and unobtrusive as I sometimes forgot I was wearing the device. The progress made from the first Touch Music project which focused more on physical computing let to further exploration of wearable technology in this iteration.

Some of the challenges faced during this project was time constraint trying to balance thesis work. As the wearable sweater incorporated capacitive touch it sometimes lagged to respond or would cut of the music midway and reconnect after some time. The capacitive sensors are hidden from the line of sight of the wearer which could potentially be jarring if the user forgets, and music automatically starts playing when the sensor is activated.

The next step of the project would be to design a more compact wearable that can be worn and removed by the wearer as they please. Presently the design of the wearable is designed to be fixed on the sweater which is not feasible if it is intended to be worn over an extended period as not everyone enjoys listening to music as they work. The possibility of exploring different form factors and ideas of incorporating the device into a wearable has the potential to be further developed and looking at different concept ideas beyond playing music while working from home.