“Fairy Dust” is a wearable electronic device exhibited in the form of a vest mounted with moving wings controlled by the movement of the body. It also has an installation/interactive piece where the movement triggers on-screen animated fairy dust. “Fairy Dust” was an exploration by use of wearable technology as a platform for self-expression through fashion or style. This wearable was created for those who dare to dream and imagine! 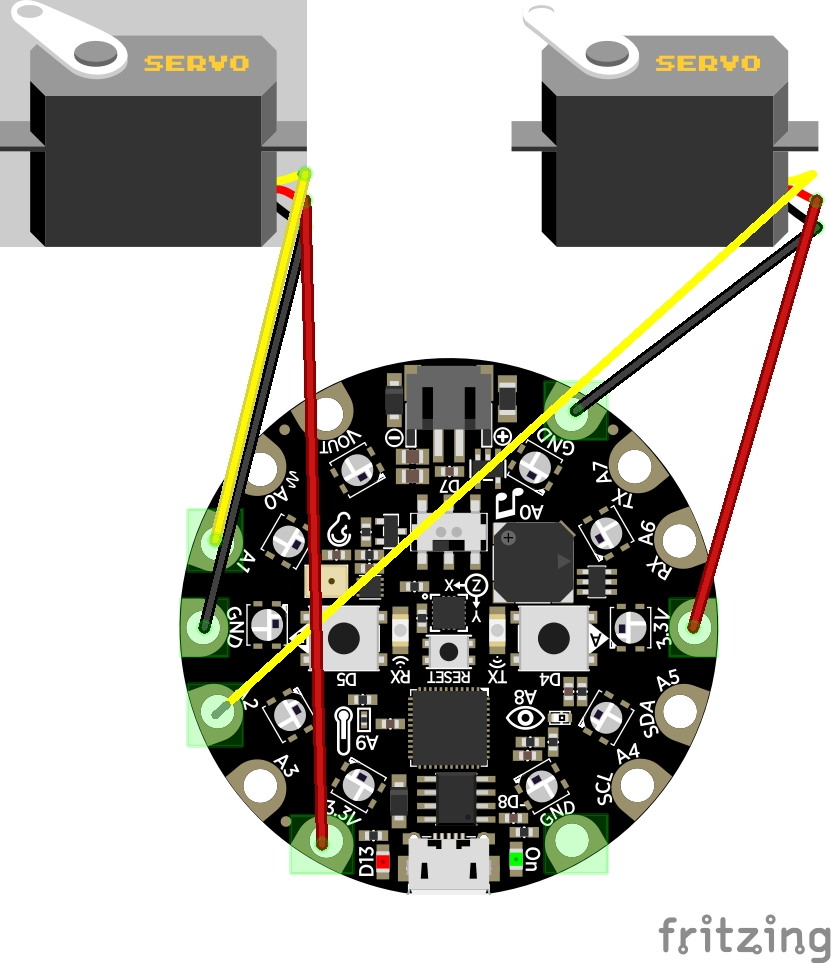 “Fairy Dust” was designed to create an engaging experience. It’s meant to be presented as an interactive art piece that would impress, surprise and delight the user and audience. Throughout the process, we followed the Design Framework For Social Wearables (2019) as we considered how and why we would create our desired outcome.

Our wearables project consists of using an accelerometer to sense body movement. The placement of the accelerometer was discussed by using Clint Zeagler’s Movement Sensor Placement Body Map. After taking into consideration garment manufacturing and wire placement, we decided to place the sensor in the back. We also considered that according to the accelerometer’s height, there would be different values for the y and z axis that would have to be addressed via calibration. After several tests, we saw that z axis values gave us consistent results in relationship to the wearable’s behaviour and environment.

“Fairy Dust” has two expressive visual outputs that are meant to capture the attention of the public. As a kinetic wearable project, we made use of servo motors to activate movement. Motors were attached to fairy wings in the back to create a flapping motion. As part of the immersive experience, the other actuator was interactive fairy dust visuals using a particle system.

Since fairies are mythical creatures, our perception of their wing behavior is heavily influenced by childhood characters and stories. In our interpretation, we decided to use an upright position to make the wings move. When the accelerometer senses a change in this position, the wings will stop moving.

At first, this interaction may be a surprise for the user, creating a sense of magic. As the user keeps interacting with the wearable, the input may become more apparent. At this point, the user can start expressing through their body movement while changing the behavior of the outcomes.

This immersive experience requires attention from the wearer. A big decision to incorporate visuals was to keep the user’s engagement and focus. This physical immersion allows participants to step into a unique interaction and let their imaginations flow. We wanted to create an experience where the user feels like part of the story. This wearable is meant to create an audience and allows for different interpretations. 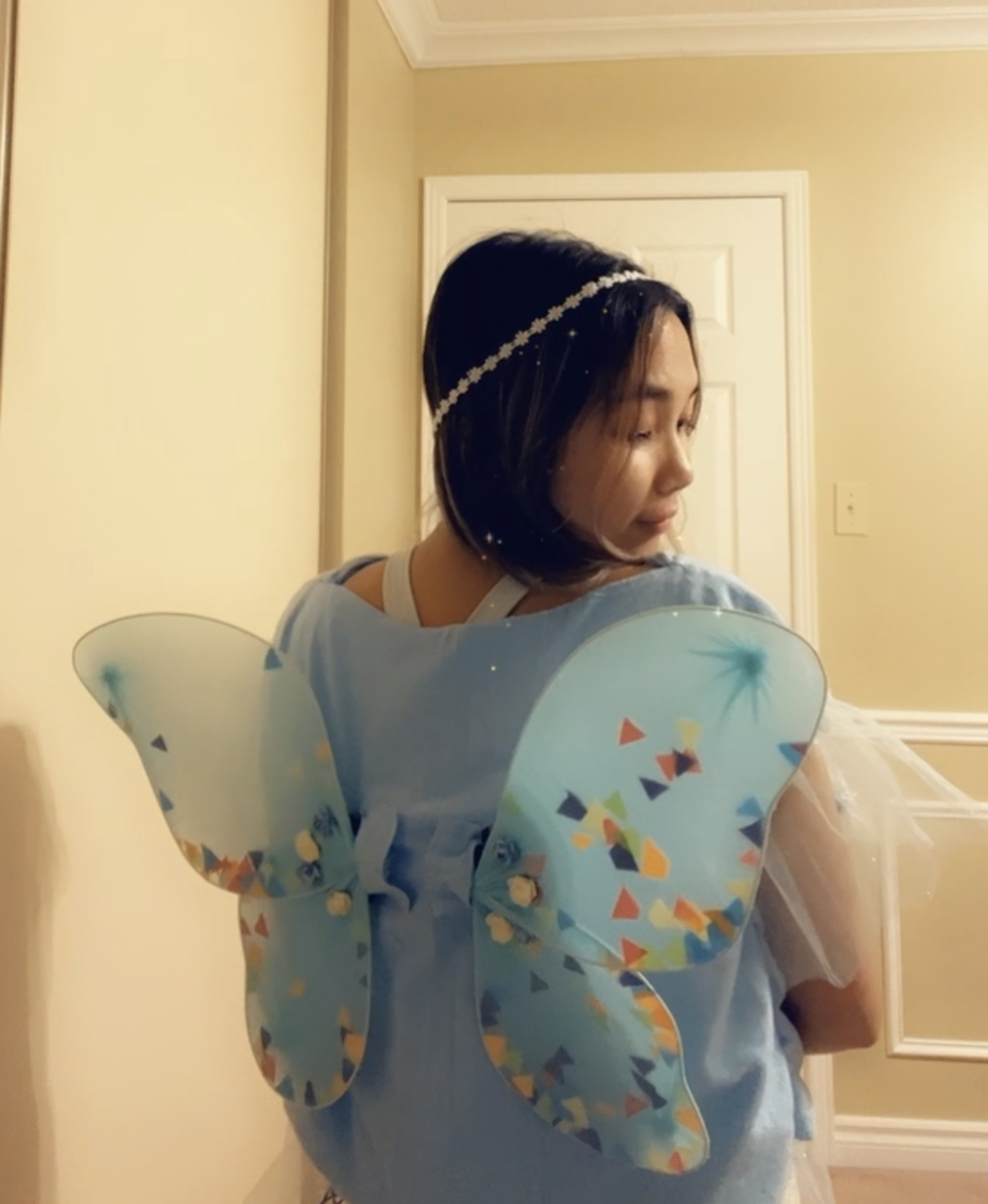 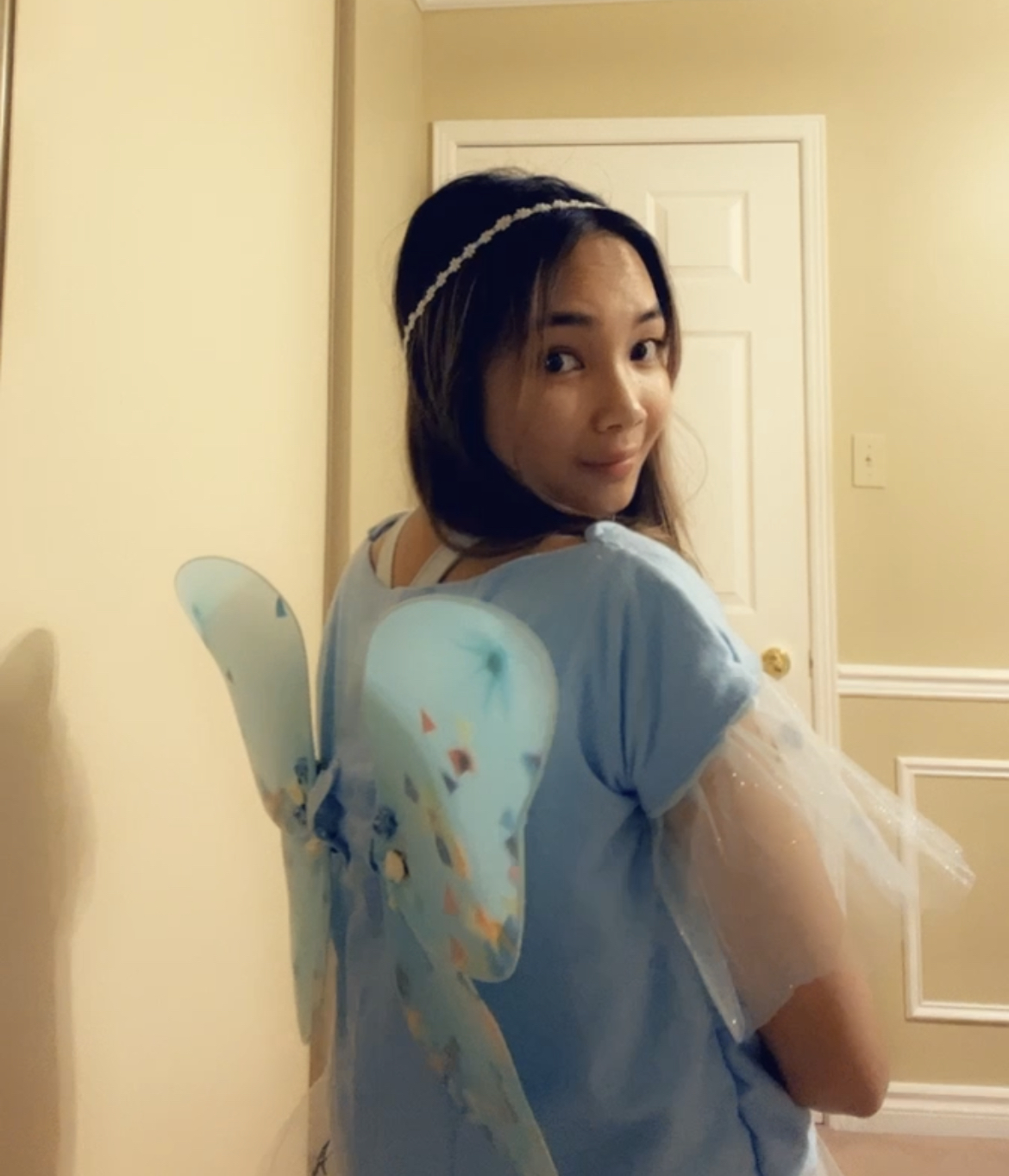 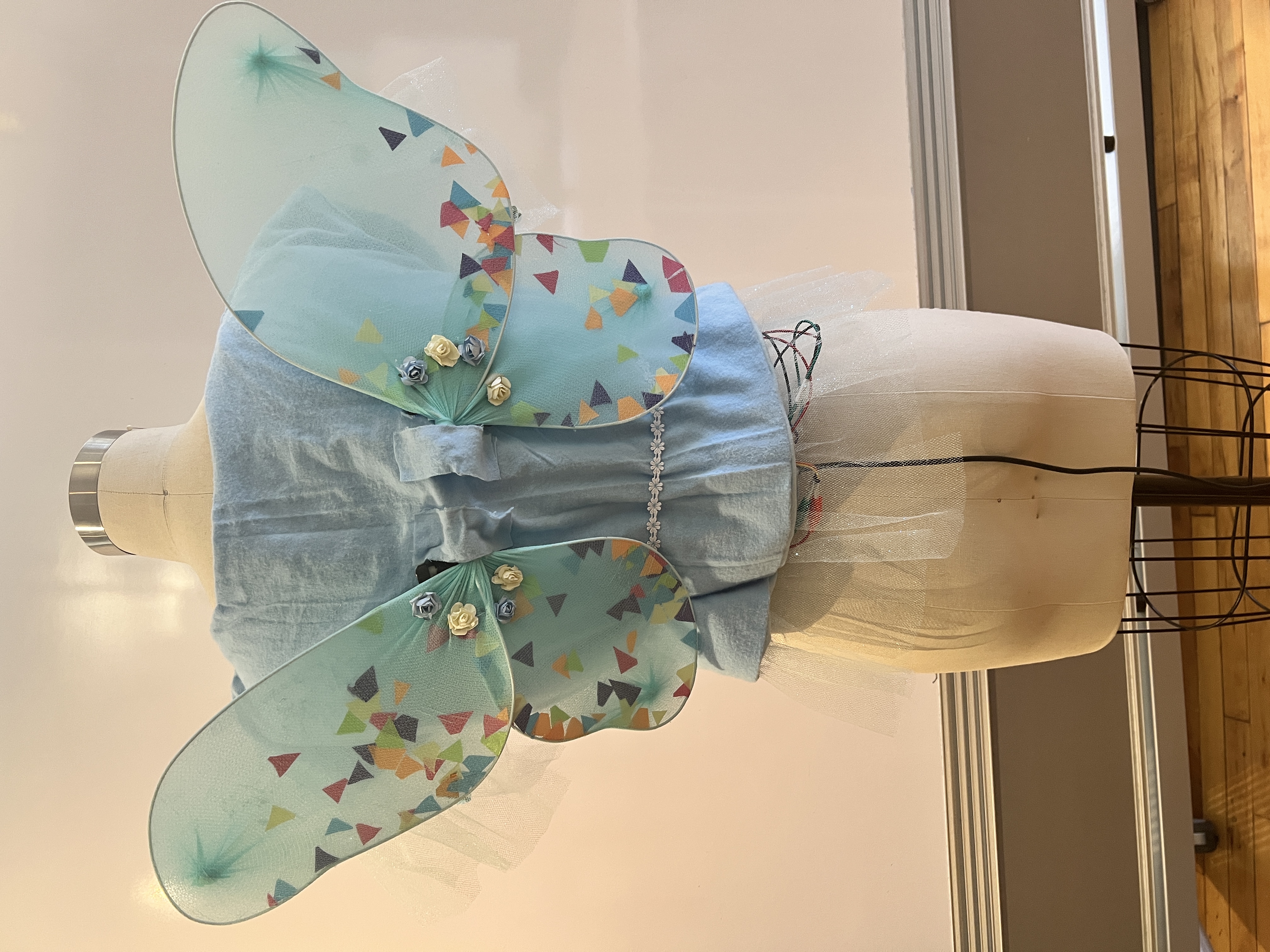 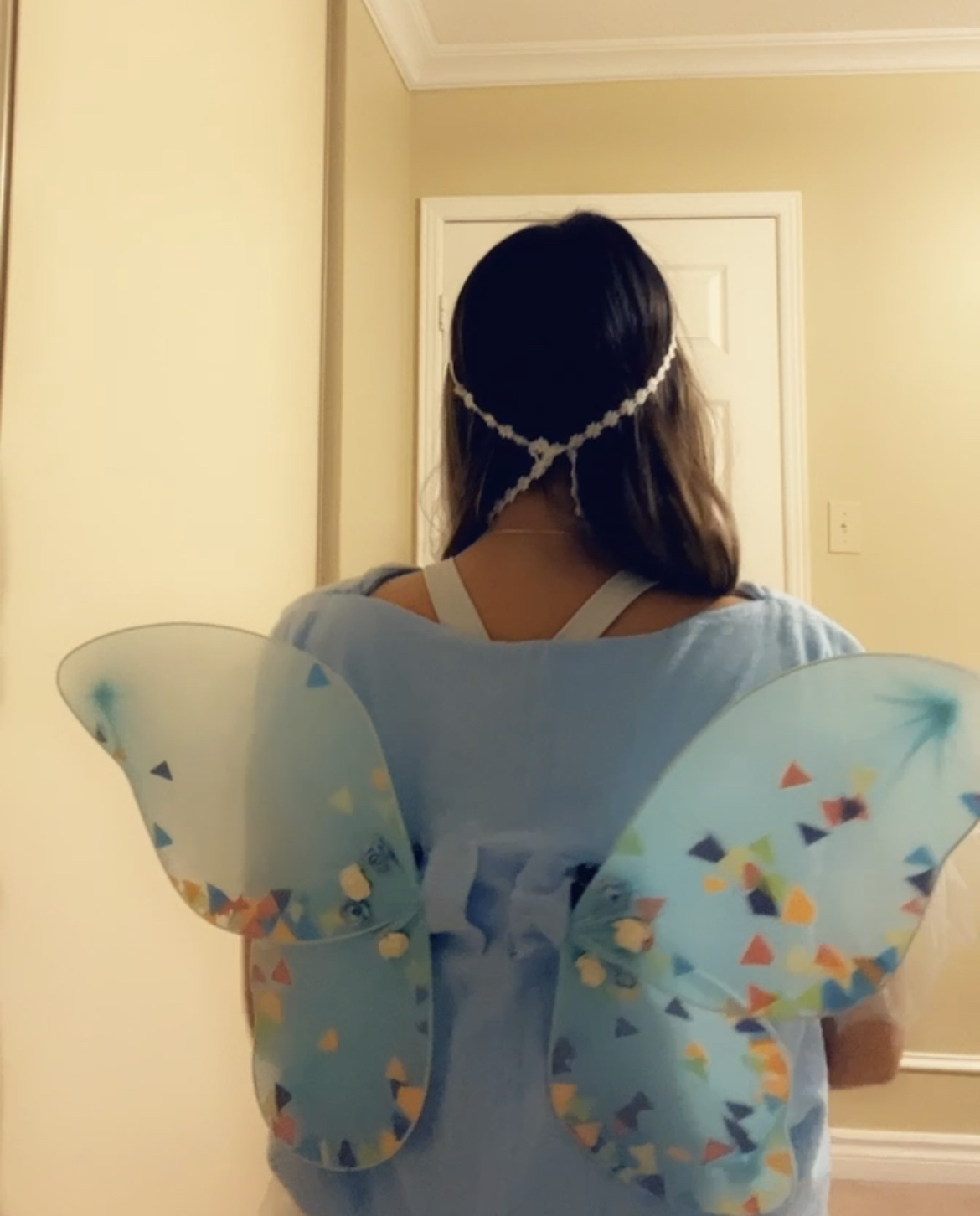 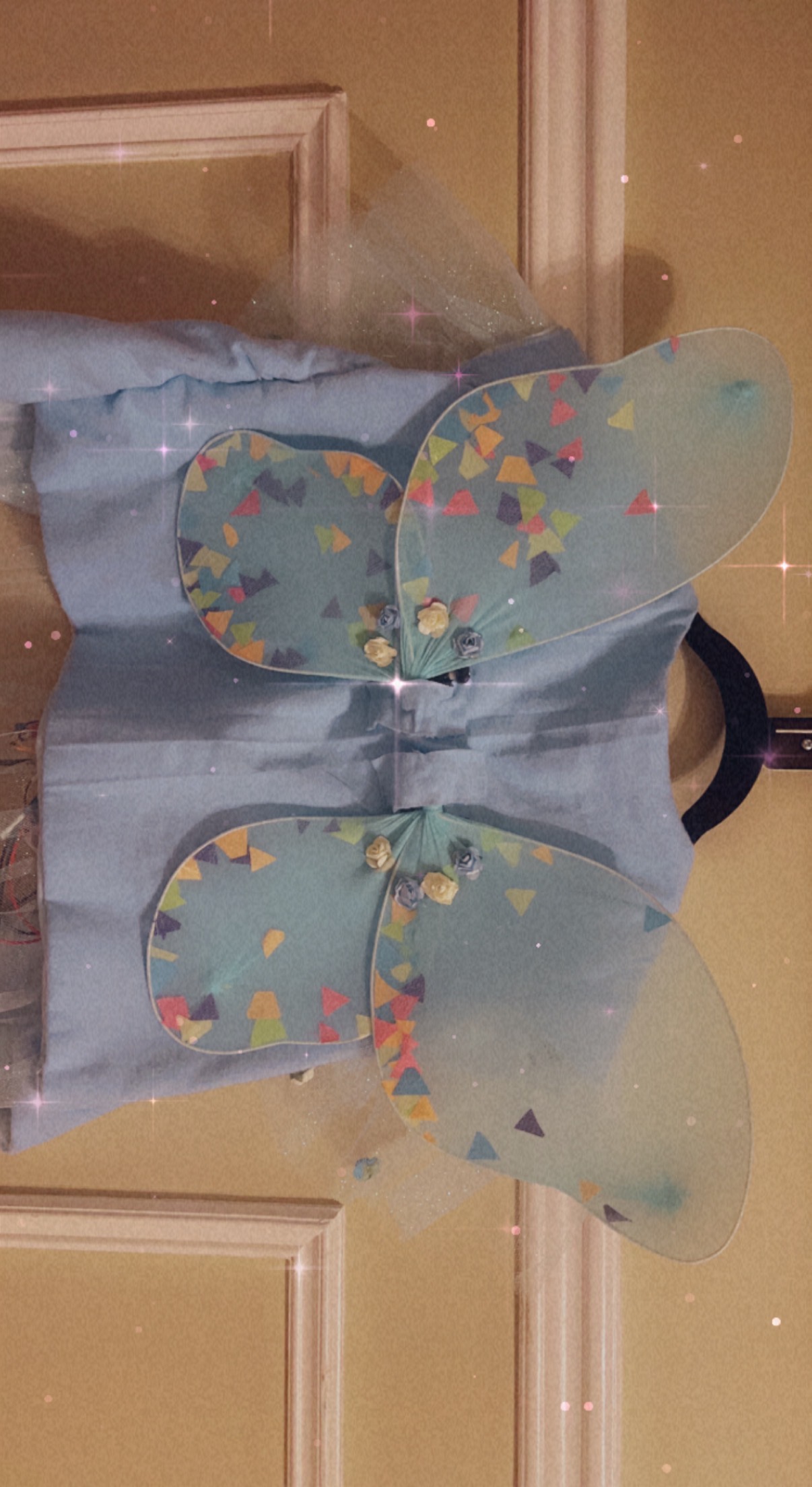 To decide the look of the visuals we decided to make a moodboard. This helped us choose a colour palette and aesthetics. 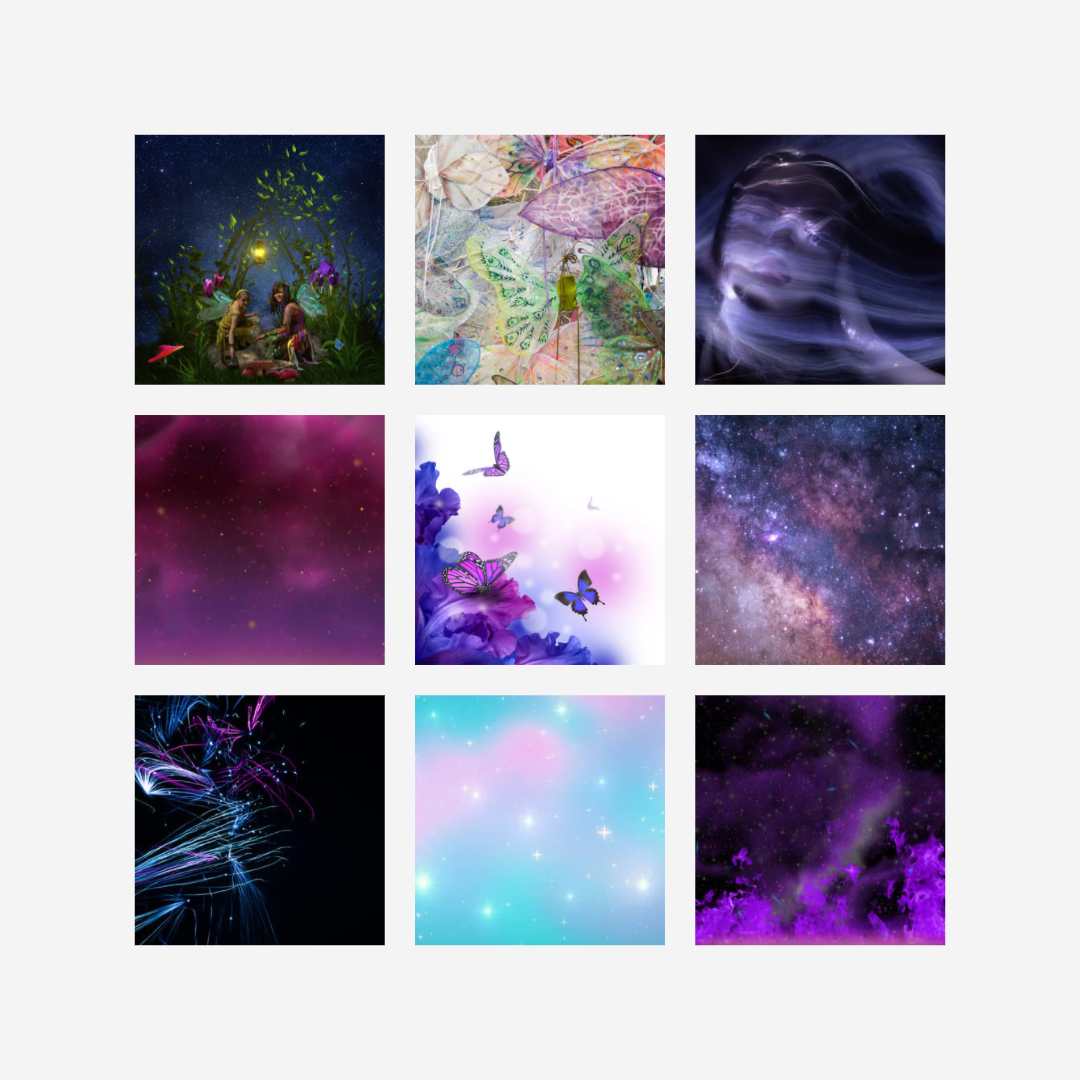 The next step was to allow serial communication between MakeCode and TouchDesigner. After some research we realized that this connection was only possible on Windows. We were able to make it work by switching computers and using functions to reference these values.

To make the visuals reactive we used a sphere geometry function. The position of the sphere referenced the serial monitor. We then used the sphere as an input in the particlesGPU and customized the behavior of the particles.

After testing the behaviour of the particle system, we customized the look to match the desired aesthetics of our immersive experience.

Being our first time working with micro servo motors, or any motors as a matter of fact it was important to run many trial and error sessions. In this first video here, one half of the wings were roughly attached to view the potential motions the motor could create.

After seeing how just the motor on its own made more of a “wiggle” motion rather than “flapping”, we were lent a 3D printed 90 degree servo attachment to allow for a more seamless flapping motion. At this point in time, the wings were moving seperately, rather than together.

The final step of the motor mechanics was placement inside the vest. We had to ensure they were sewn in at an appropriate height and distance from each other for a more accurate emulation of “flapping” wings”. At this height, the wings do not obstruct the wearer’s movement or offer any discomfort which is exactly what we were aiming for!

Since this project was more of an exploration for self-expression, it was important that we created a wearable that captured the majestic style and mood that was envisioned. We decided to create a vest from scratch using materials sourced from FabricLand. I started out by using a form-fitted shirt as a guide since the wearable would be fitted to my (Angelina’s) body. The final wearable ended up being a hand-sewn double lined vest made of a flannel fabric, with tule sleeves and a tule trim, finished off with rose embellishments. The wings were the only thing that were pre-made (purchased from Dollarama). This was my first time doing something like this and I am very proud of the outcome!

Being a collaborative project, we depended on meetings and constant communication. As per safety precautions due one of us contracting COVID-19, we were forced to work remotely on the last week before the due date. This was challenging since only one of us had access to the wings and vest. We also needed access to Windows to connect the serial monitor from MakeCode and, unfortunately, this led us to not see both finished pieces work together.

In spite of all circumstances we are both very proud of the outcome. We followed a schedule and we communicated really well throughout the process. We set goals for each team meeting and we assigned responsibilities to work on our own. We were able to successfully work as a team and individually.

We would definitely want to keep working on this project as a collaboration. Something  that we want to incorporate is another output such as lightning. We had some trouble incorporating neopixels into our design, we also discussed the possibility of adding fibre optics and the design possibilities that this would bring.

Our goal was to see body movement interact with the wings and visuals. Nonetheless, another exploration that we are curious about is making the visuals interact to the wing’s movement. We’re both curious to keep exploring this little world that we created and the endless opportunities for different unique interactions.

“Road Runner” is a wearable electronic exhibited in the form of a baseball cap. “Road Runner” is a wearable created for runners who like to train on the street (especially those who like to run at night). This wearable is meant to act as a safety tool, allowing the user to signal drivers which way they are running/turning to avoid any potential accidents. This project is inspired by my own passion to train and run in the late evenings.

This hat is an interactive experience allowing the user to activate programmed sensors based on their movements. This wearable allows the user to set off the left strip or right strip of flora neopixels by tilting their either head left or right. In addition, a built-in safety function has been implemented, when the wearable reaches above 30 Degrees Celsius, the lights are programmed to turn off to avoid over heating of the device. The sensors used in this project include the onboard accelerometer and temperature sensor.

This wearable consists of two different lighting modes to display the following:

“Road Runner” is also accompanied by a start-up animation and chime to alert the user the wearable has been turned on. 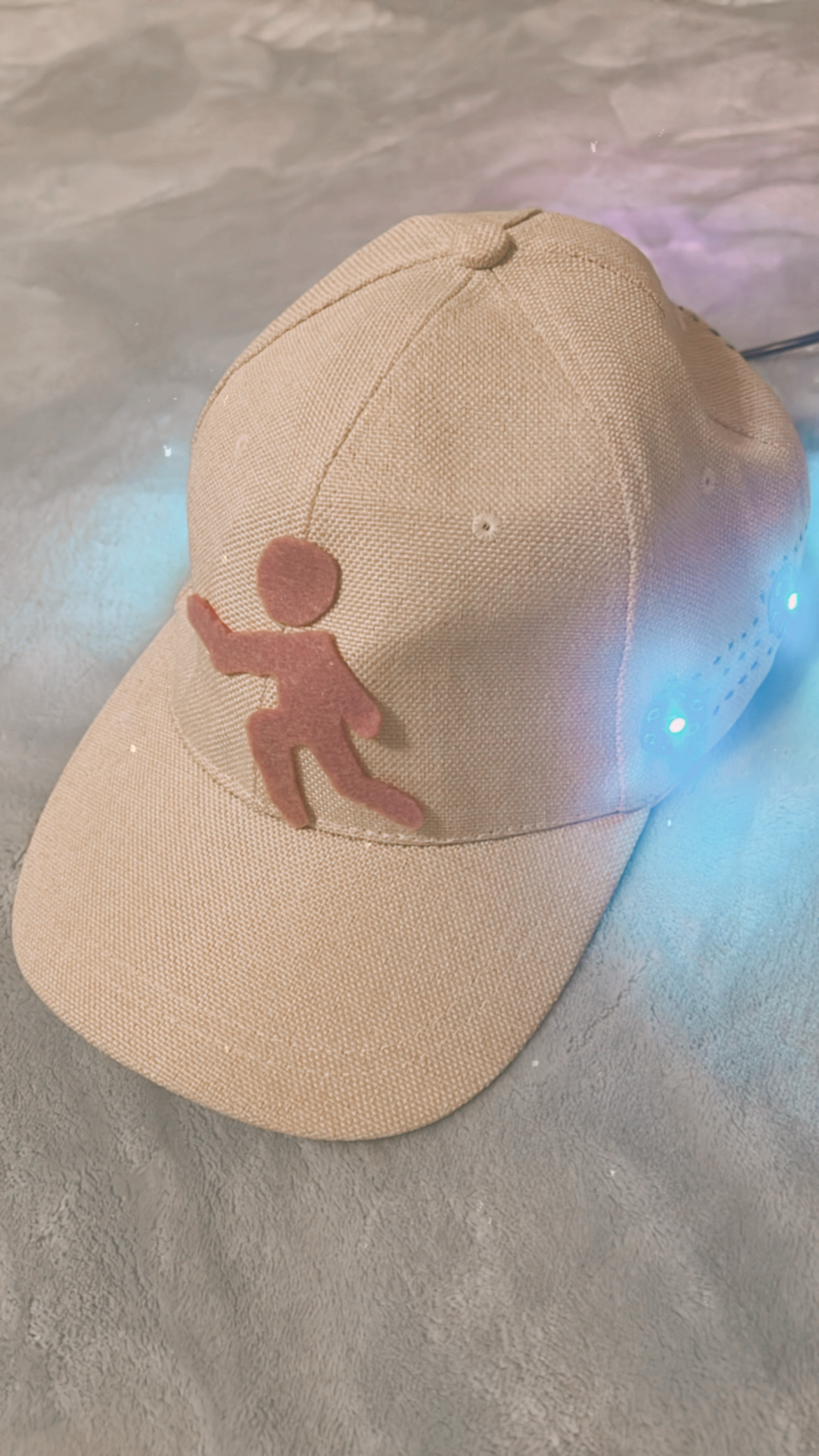 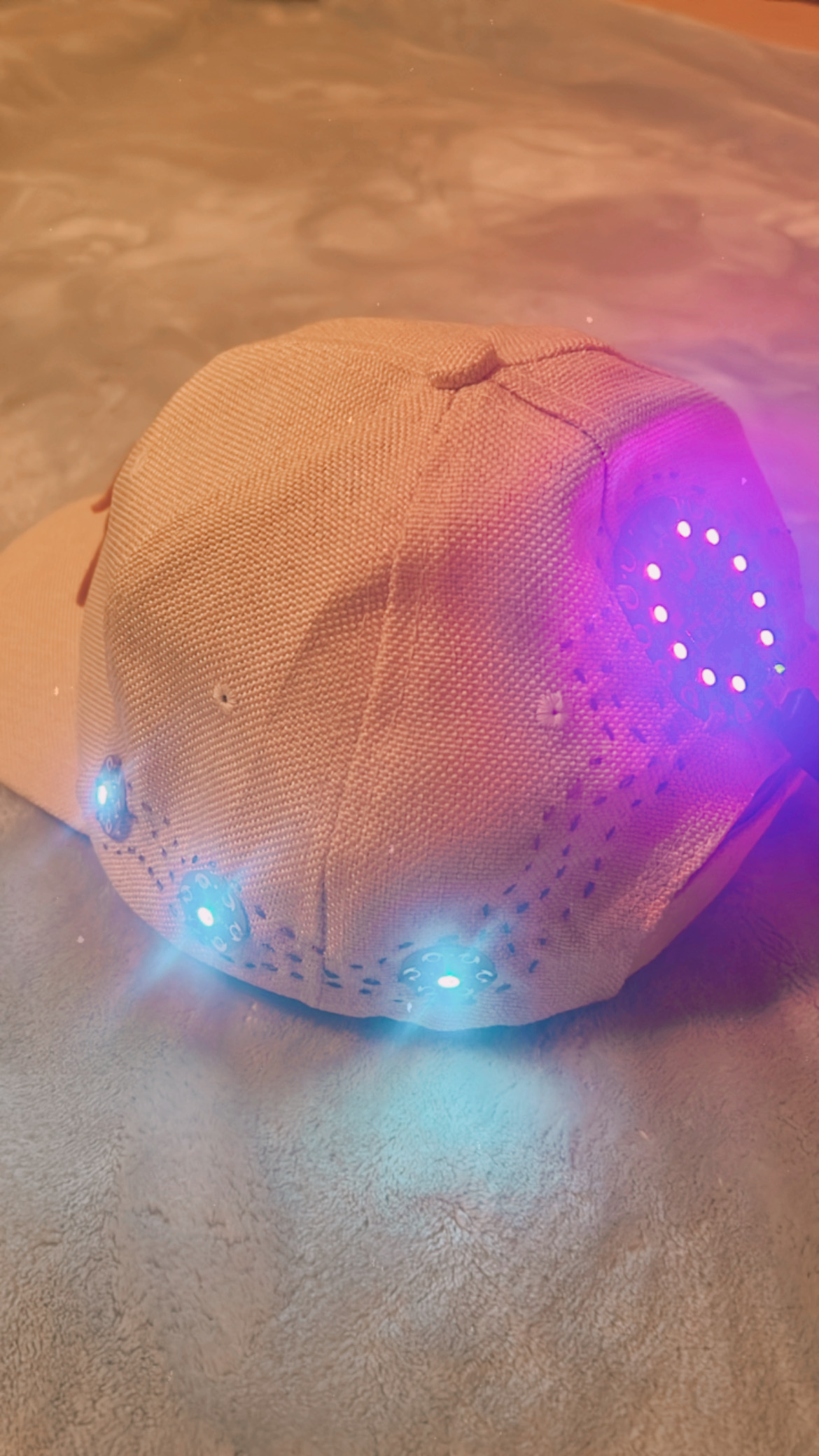 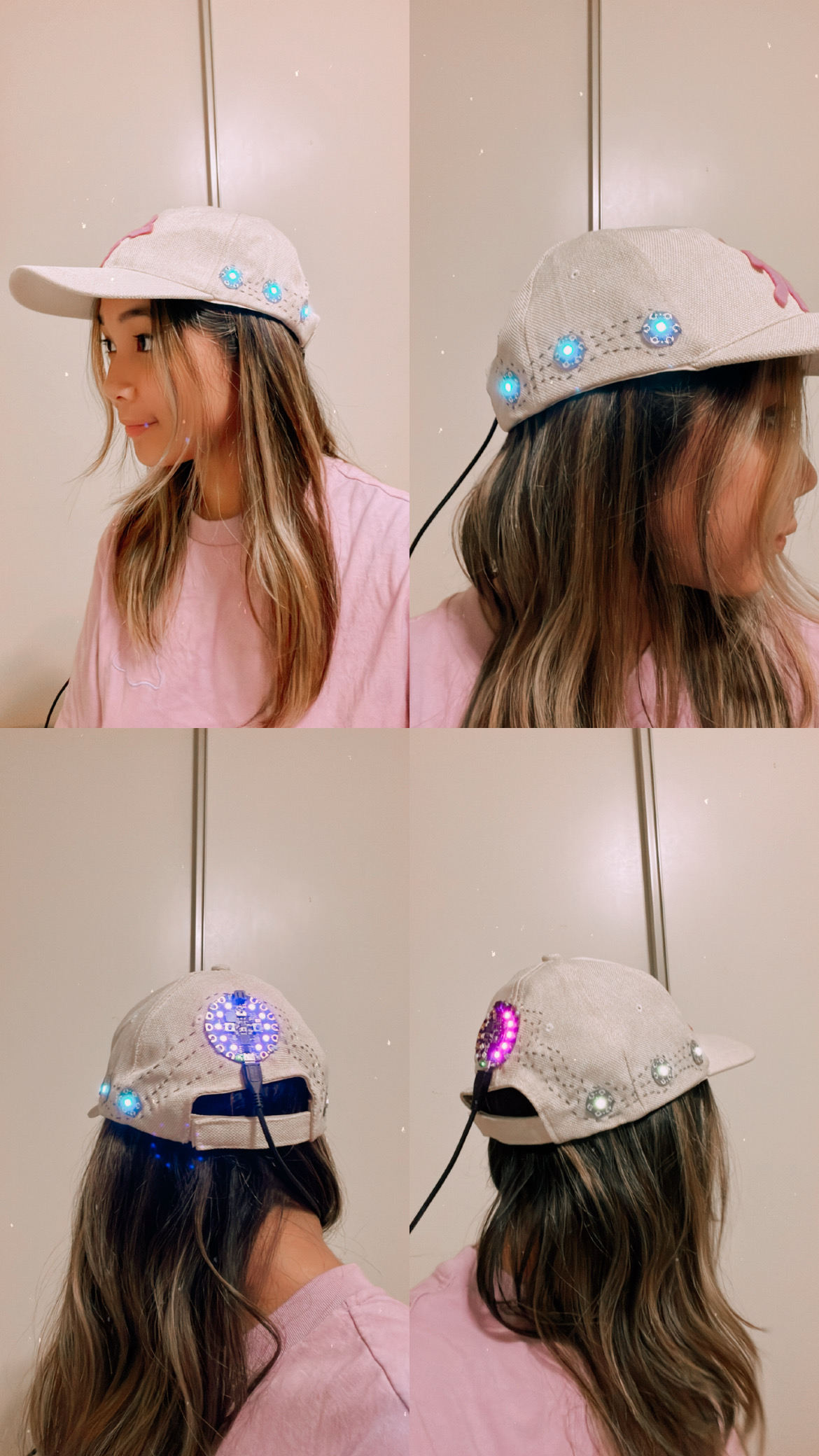 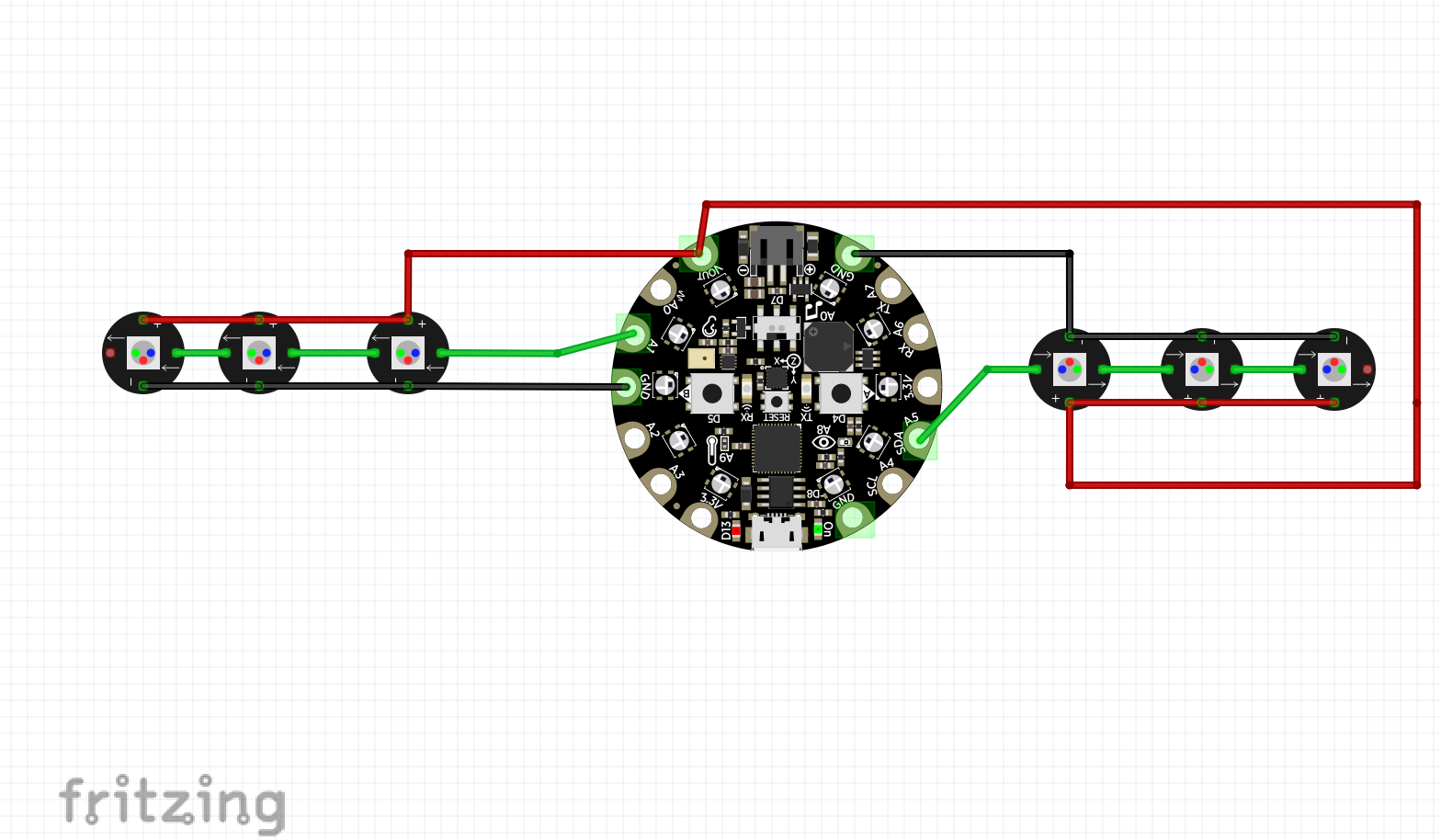 How To Sew Perfect NeoPixel Circuit By Adafruit Industries 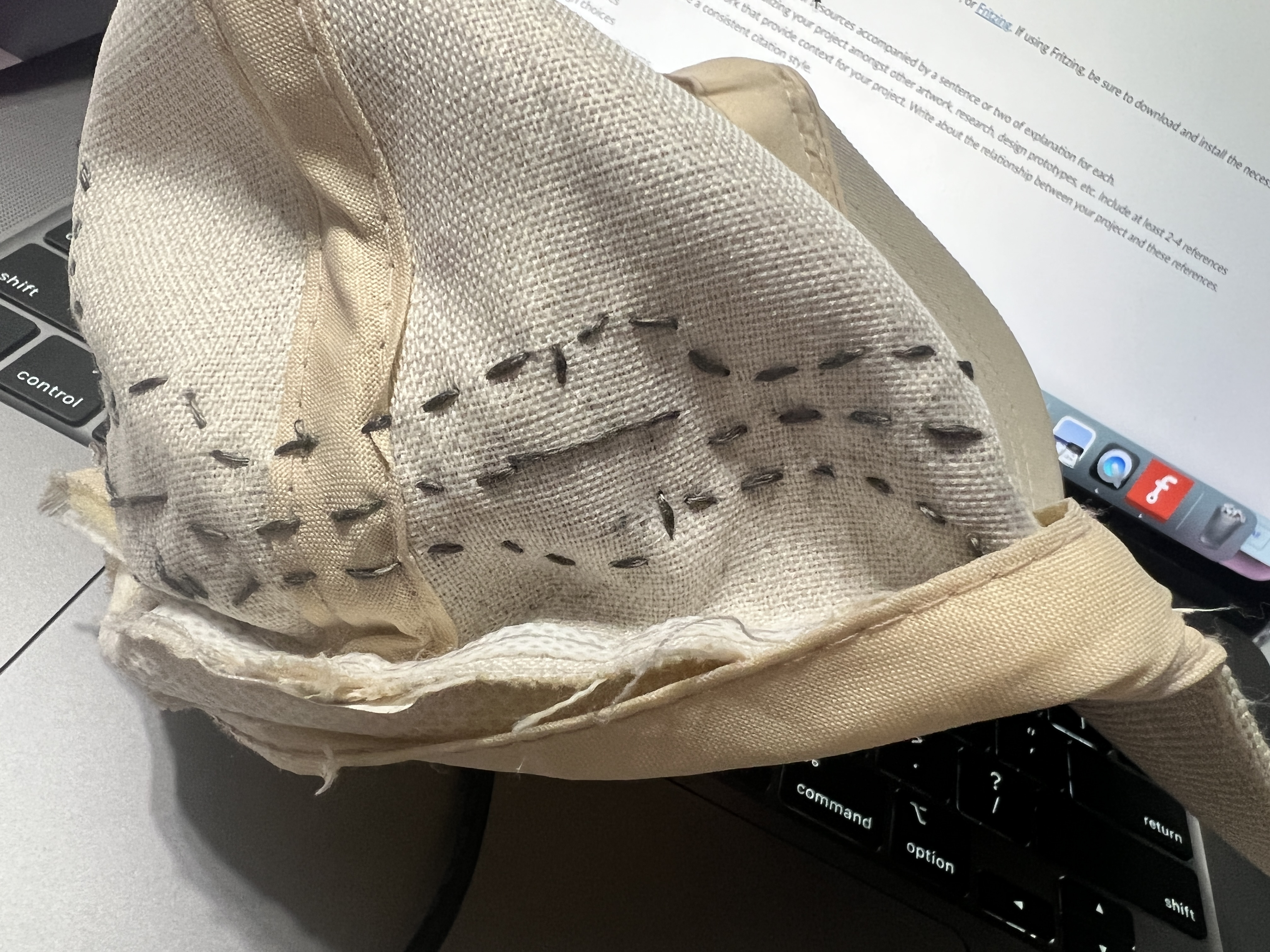 I had the absolute worst luck while completing this assignment. I went through 4 bobbins of 30 ft conductive thread, and I learned that I should always buy way more than anticipated to save me the commute down to Creatron Inc. I also learned to be extremely careful when tying off the ends of the circuits, I ran into the issue of tying too tight, causing the thread to snap. I had to redo this entire soft circuit about 8 times now, and I definitely learned my lesson of patience and resillience. Some next steps I would take is maybe printing translucent 3D cases for the neopixels and CPX to add an extra layer of protection from heavy usage.

Project Title: “Wearing Your Heart On Your Sleeve”

“Wearing Your Heart On Your Sleeve” is a wearable electronic exhibited in the form of a sweater. This sweater is an interactive experience allowing the user to activate programmed switches based on their emotions. “Wearing Your Heart On Your Sleeve” allows the user to express what cannot always be easily said. Have you ever had such a burning passion for someone, but words just can’t express how you really feel? Or on the contrast, have you ever felt such hatred towards another? A picture is really worth 1000 words, or in this case a wearable! This wearable consists of three different lighting modes to display the following feelings:

When the wearer puts on this sweater, they will notice some digital buttons on their sleeves. On the right-hand sleeve, there is a copper heart (connected to GRND) which will act as a button to signify their choice. When pressing the large copper heart to one of the icons on the left sleeve (X, Neutral Sign and Heart), each lighting mode will appear respectively. X will signal blue, ═ will signal amber and ♡ will signal magenta. There is also a tone for each respected emotion to add for more user accessibility (colour blindness, deafness and vice versa).  I decided to create this wearable due to my own introversion. Sometimes I find it difficult to speak what’s on my mind, therefore I wanted to create a wearable to make communicating your feelings just a tad easier.

Wearable Being Displayed (On Table and Hanger) 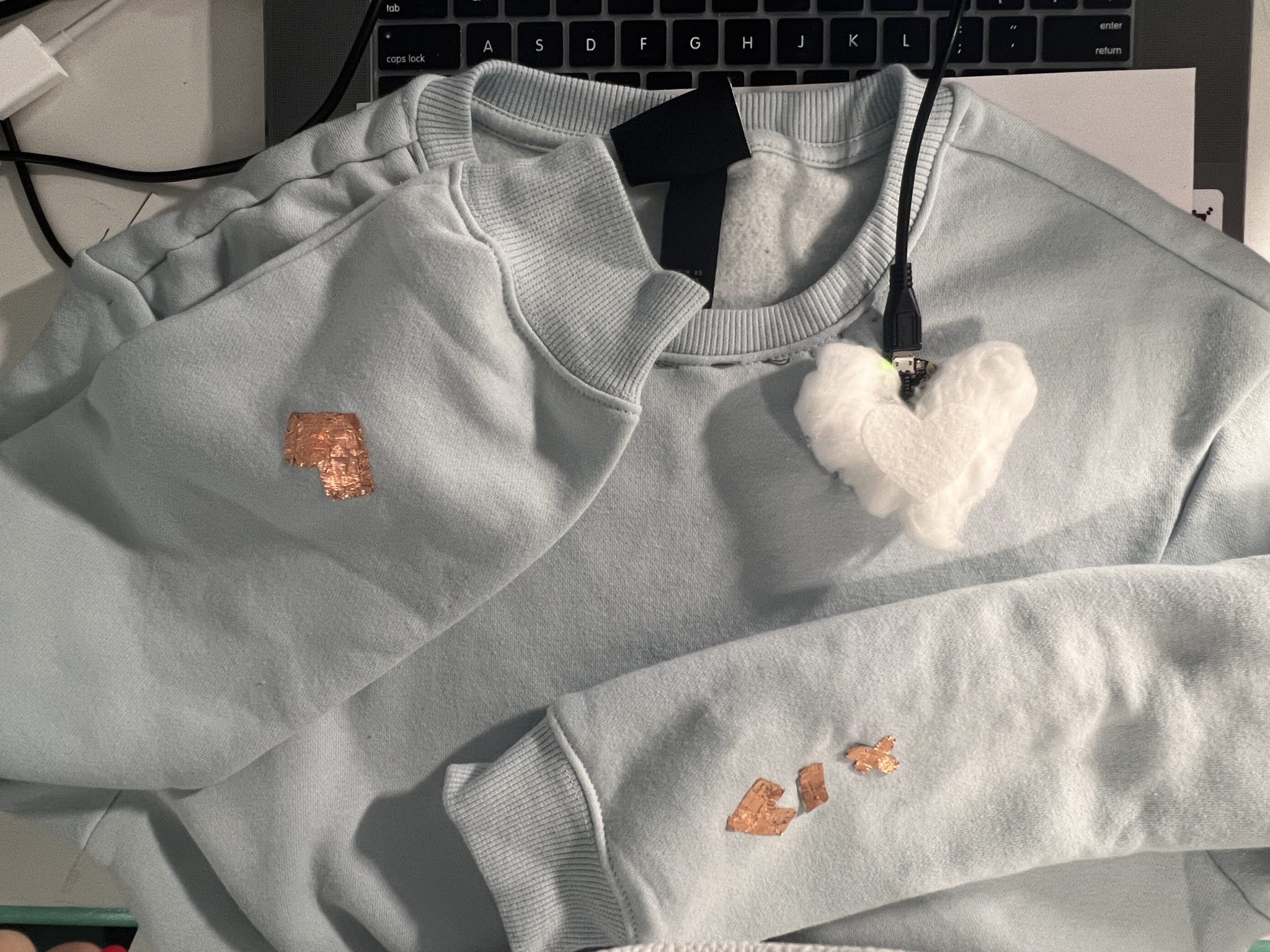 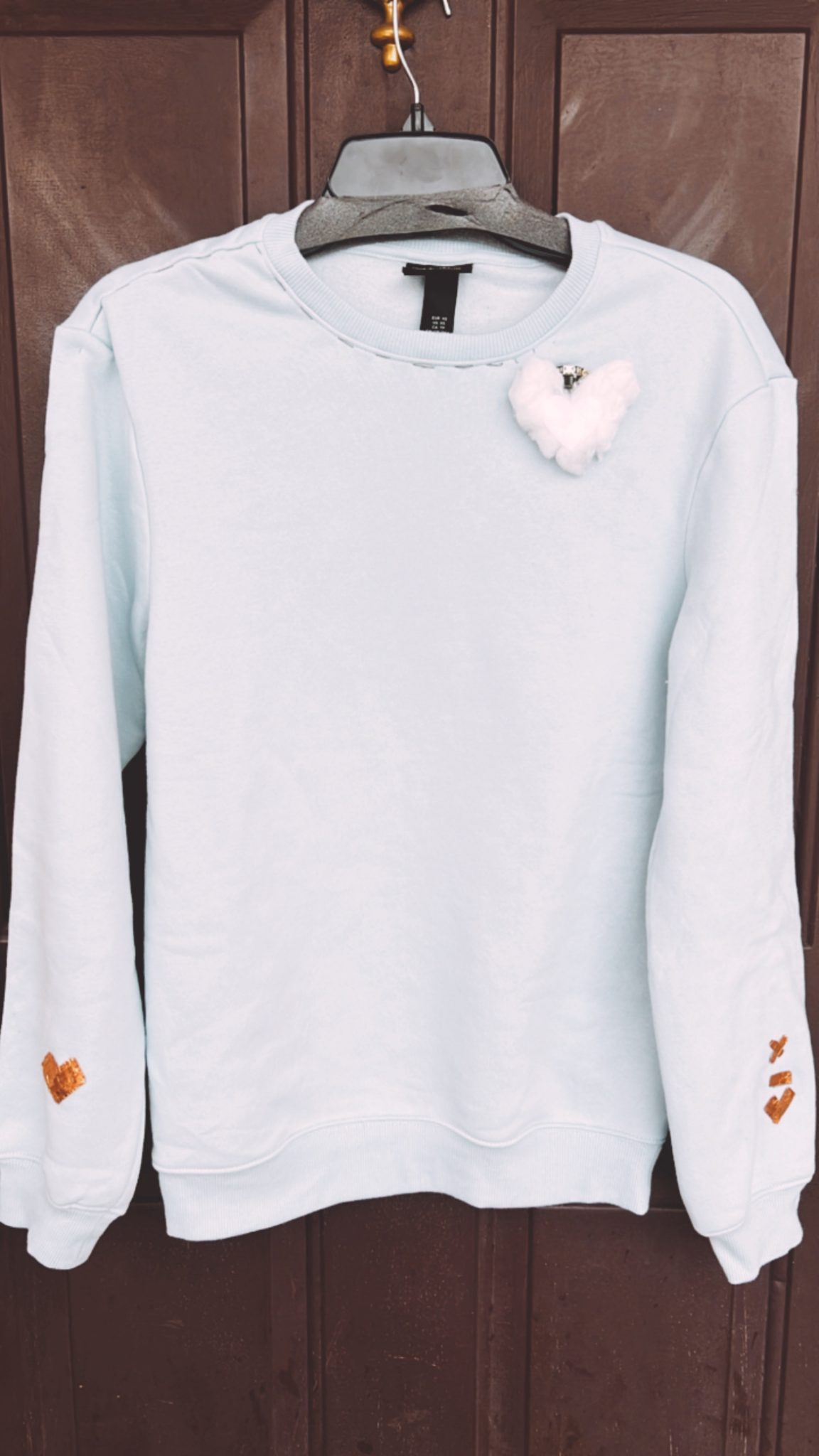 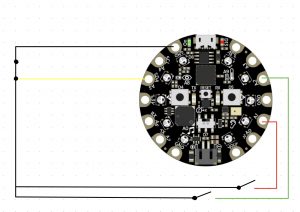 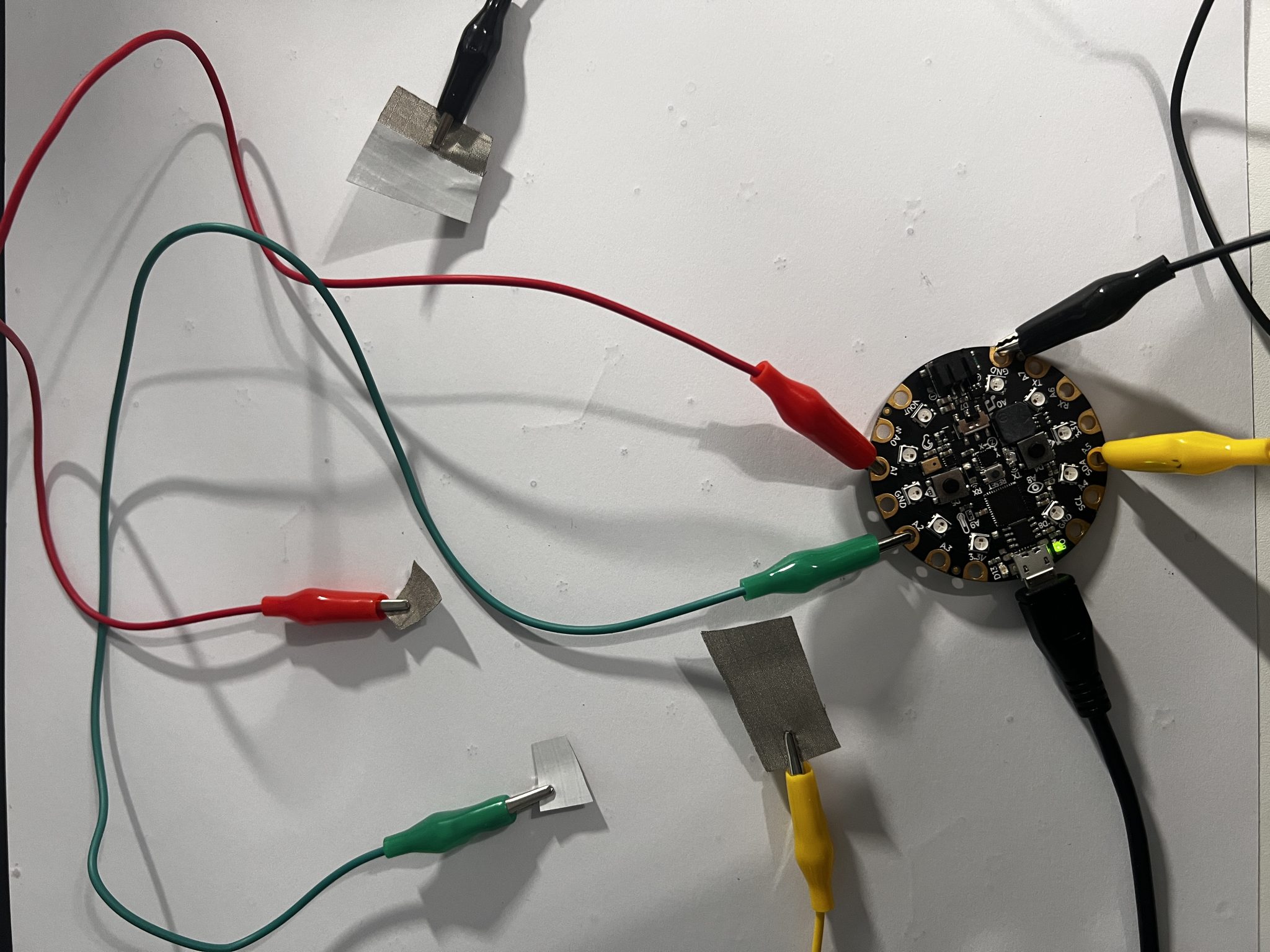 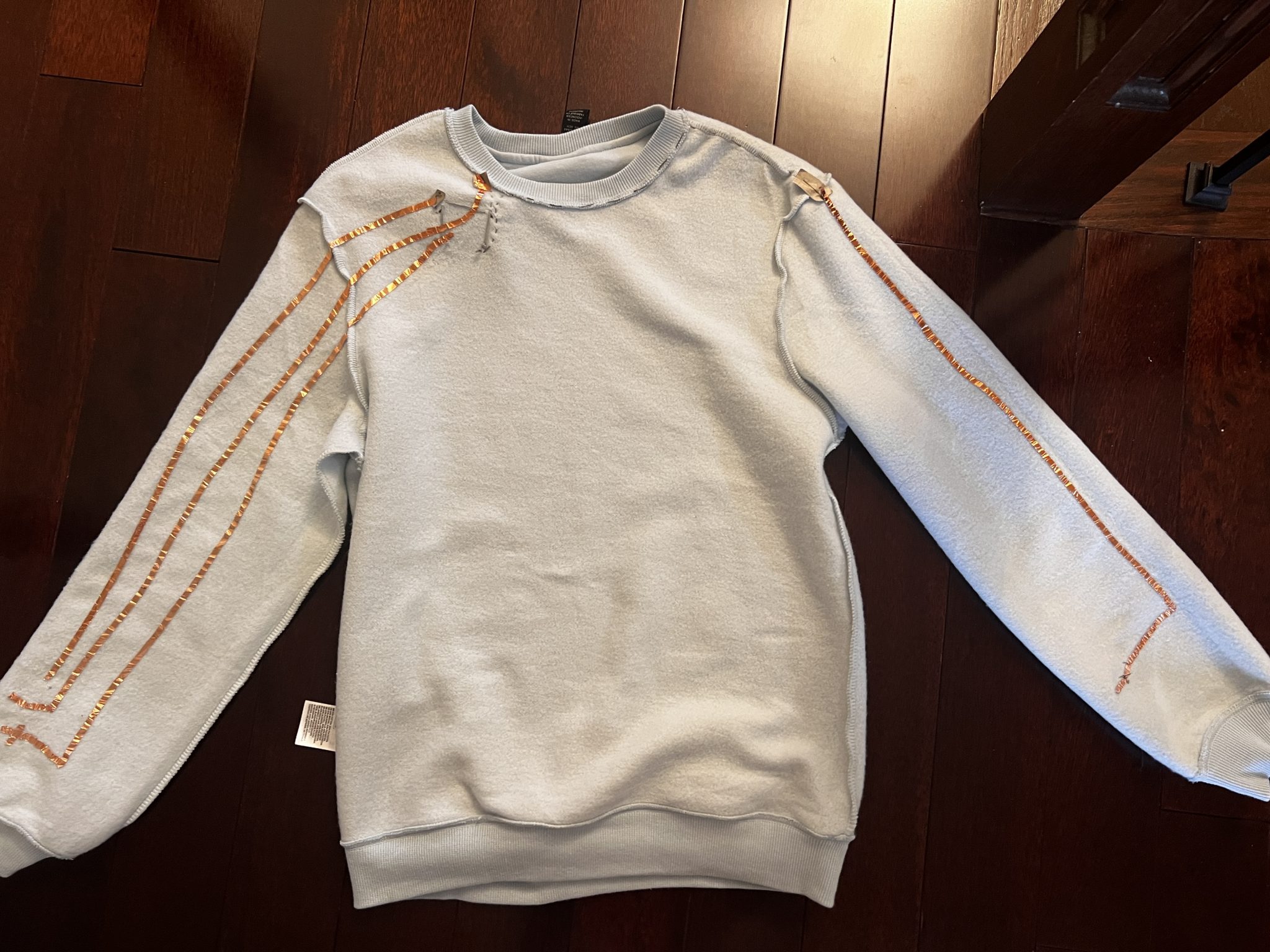