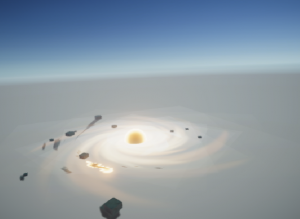 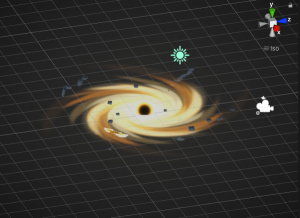 For my final assignment, I used a couple of applications that were taught in class. The cubes that are shown have a material I made through substance designer, named concrete, at first I thought about what shapes and other aspects I should use to make them. Then I about how animated shows make cubes for easier animation and shading, I utilized particles effects in unity engine to vary the size and rotation for the cubes, I also use that for the swirl effect that is shown. The center includes unity shader graph mostly using a sphere model along with a fresnel, the distortion is kind of hard to see within the still image but this makes use of the shader graph as well using the UVs to make a transparent distortion. During the presentation, it will be described greater in-depth