Flower Shop from the Fairy Tale

Our inspiration for this project is from some creative scenes. The first inspiration is from the music video of a K-pop girl group, which is Aespa. The video shows a lot of bright and shiny elements including illuminated plants and objects from nature. The other inspiration is from a series of paintings related to mystery forests created by the Chinese illustrator called MaoYong Liu, where she created a lot of immersive mysterious corners within a forest. We were inspired by the combination of plants and lights, so we finally decided to set a scene as a magical flower store from the fairy tale.

For creating a magical flower shop, we set our goals of exploring natural textures and bright colours. We would like to use as many functions as we can for a better experience of the new tools we learnt (substance designer and shader graph) as we found that node coding is a tool which is exciting to learn. With the creative coding, we wanted to create something which is different from what we did with p5.js and see if we can make some innovations from it.

We got the assets online and downloaded them. We first get rid of all of the original textures. And then created our own texture and animation.

Colour theories had been implemented into our scene. We chose the colour that fits the concept and theme first, and then we found the triadic, analogous, complementary combination of them. 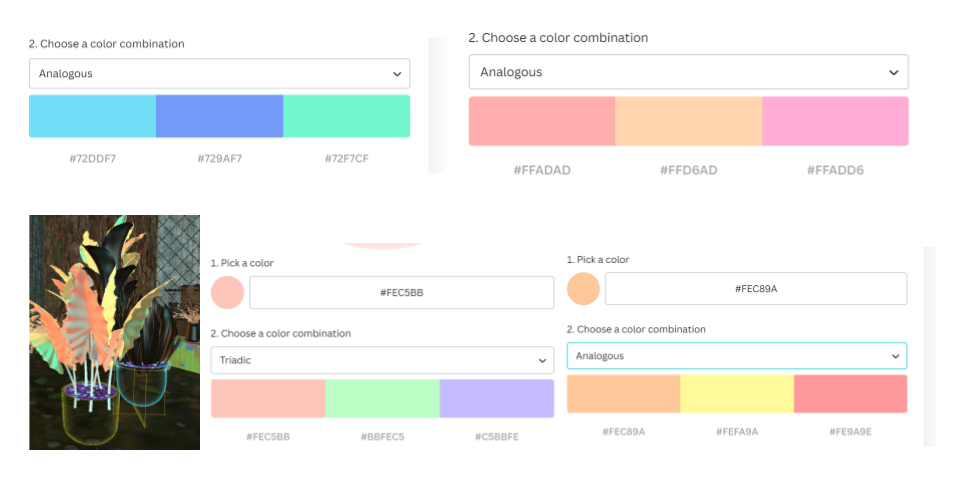 What did we learn by doing this project?

This is the first time for us to learn how to apply our shaders on models in a scene. We realized how important it is to design the shader and detailed textures. The shader created a huge difference. In P5.js when we do the type coding, we used to pay more attention to creating graphical shaders and thinking about how to make the shader’s patterns identical, but now we are applying them to the real scene, so they have more storytelling use.

node-based coding is like a life savour by making our work more effective and powerful. It encouraged us to think about having our own shaders in our later work. we cannot imagine how complex that will be by having only the conventional programming. Now we are more confident at creating shaders becasue we will not be so worried about forgetting how to type the program vocabulary.

both substance designer and shader graph would require a lot of details on the final effect. with node-based coding, it is way more efficient to change those details and have them under control.

We know that we will use the macaroon colour series at the beginning but we found that with the colour theories, we could create different combinations of different colours more easily. The application of colour theory in space also helped us better understand the different results having different theories.