For my last project, my goal is to produce incorporate all the practices we had learned from coding in GLSL and applying it through the use of nodes from the software.
My vision is to have a project where it gives off Surrealism and dreamlike setting with a touch of photorealistic details.

I started off with exploring the different uses of randomness and shape generators that can be used in Adobe Substance Designer. 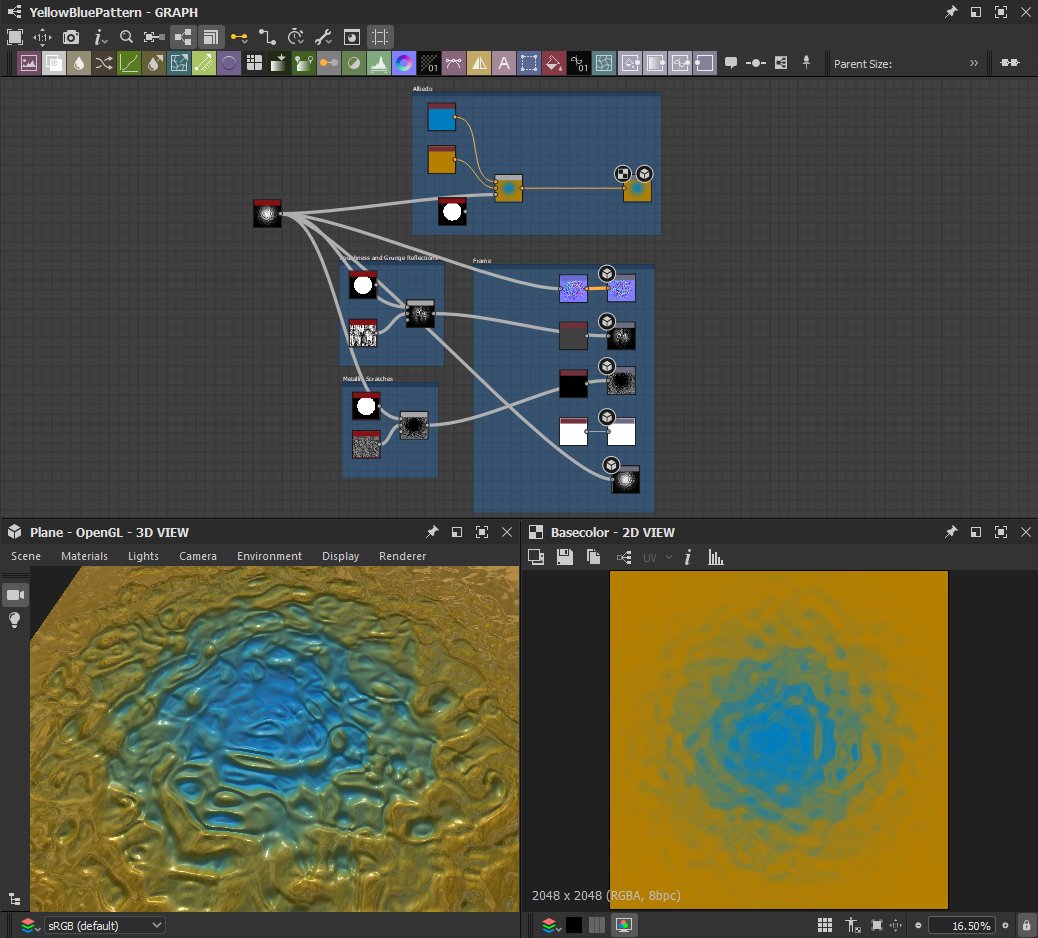 And by applying the practices and methods used in the tutorials provided in the class, the first shader for the final project is successfully made.

After exporting the bitmaps, the textures are applied in the Unity shader graph to create a material and applied GLSL coding practices such as time, sine, absolute, and math functions to make the material to be more complex and dynamic. 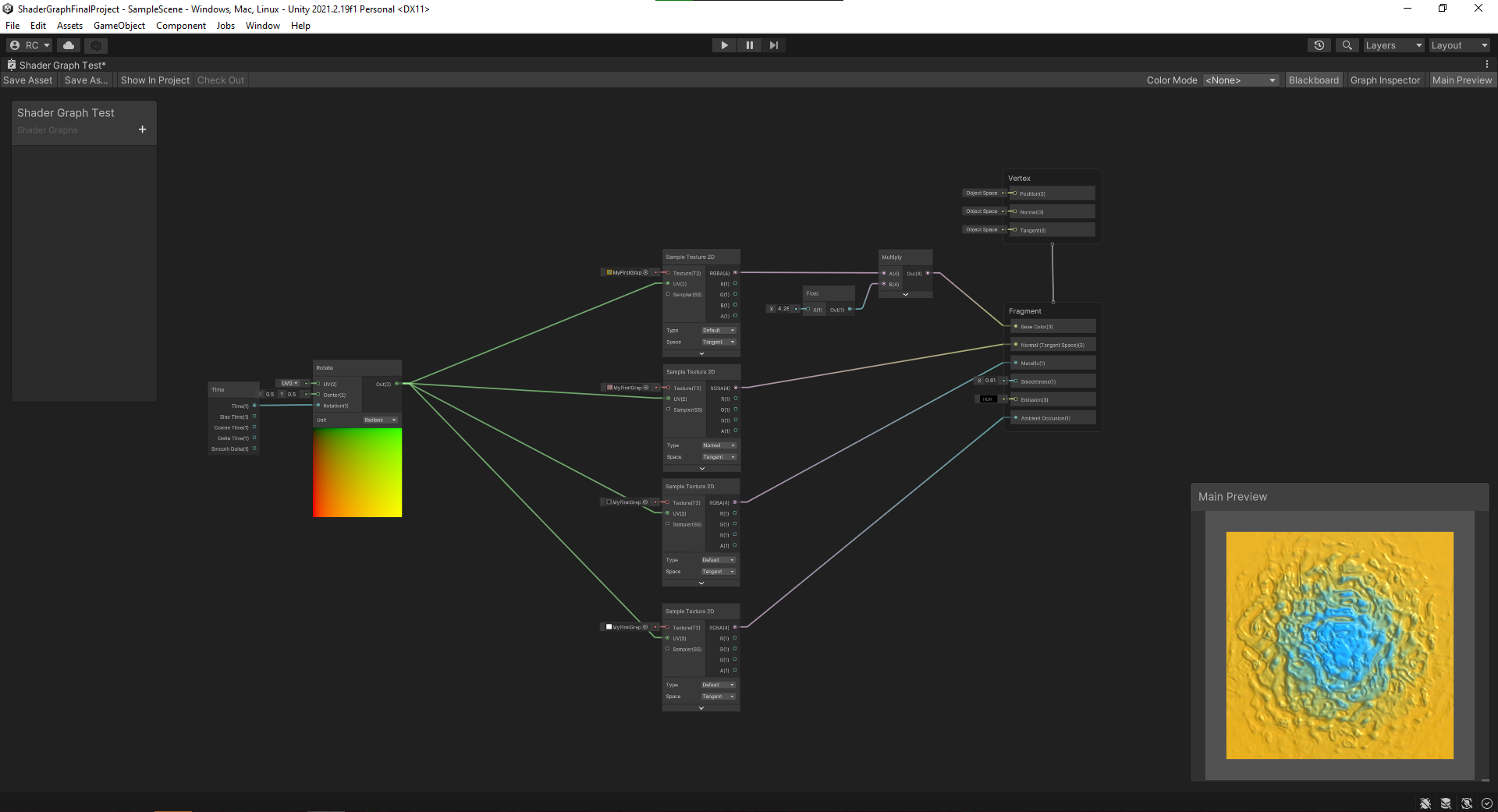 Material created from the shader graph and applied in the cube object. 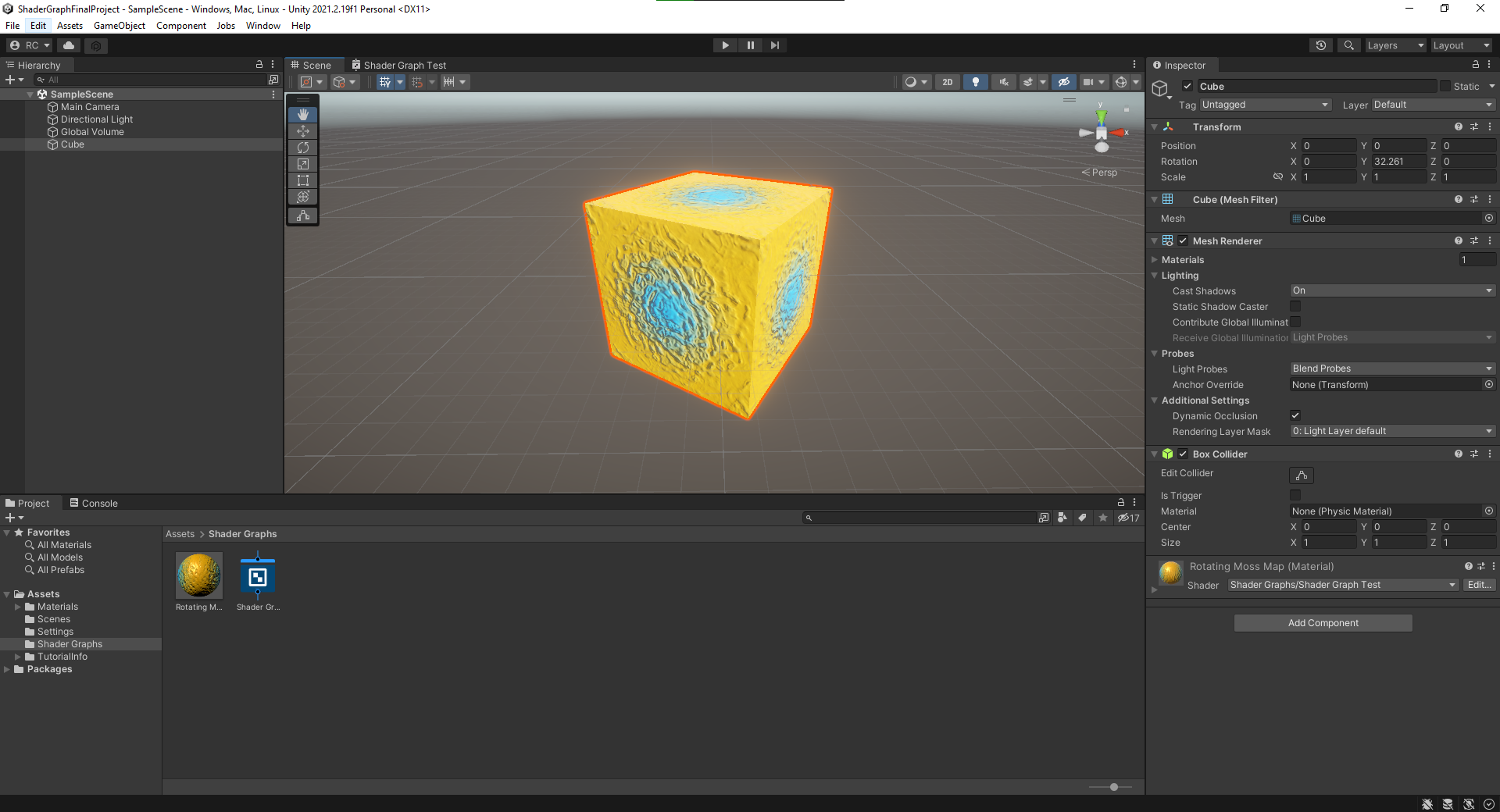 Instead of downloading assets from the store, or using generic shapes, I made my own object and modeled it with Rhinoceros3D, and imported the file in Unity. The shaders and materials made will be applied to this object and create surrealism; where unusual patterns are wrapped around an object that we normally see (a television). 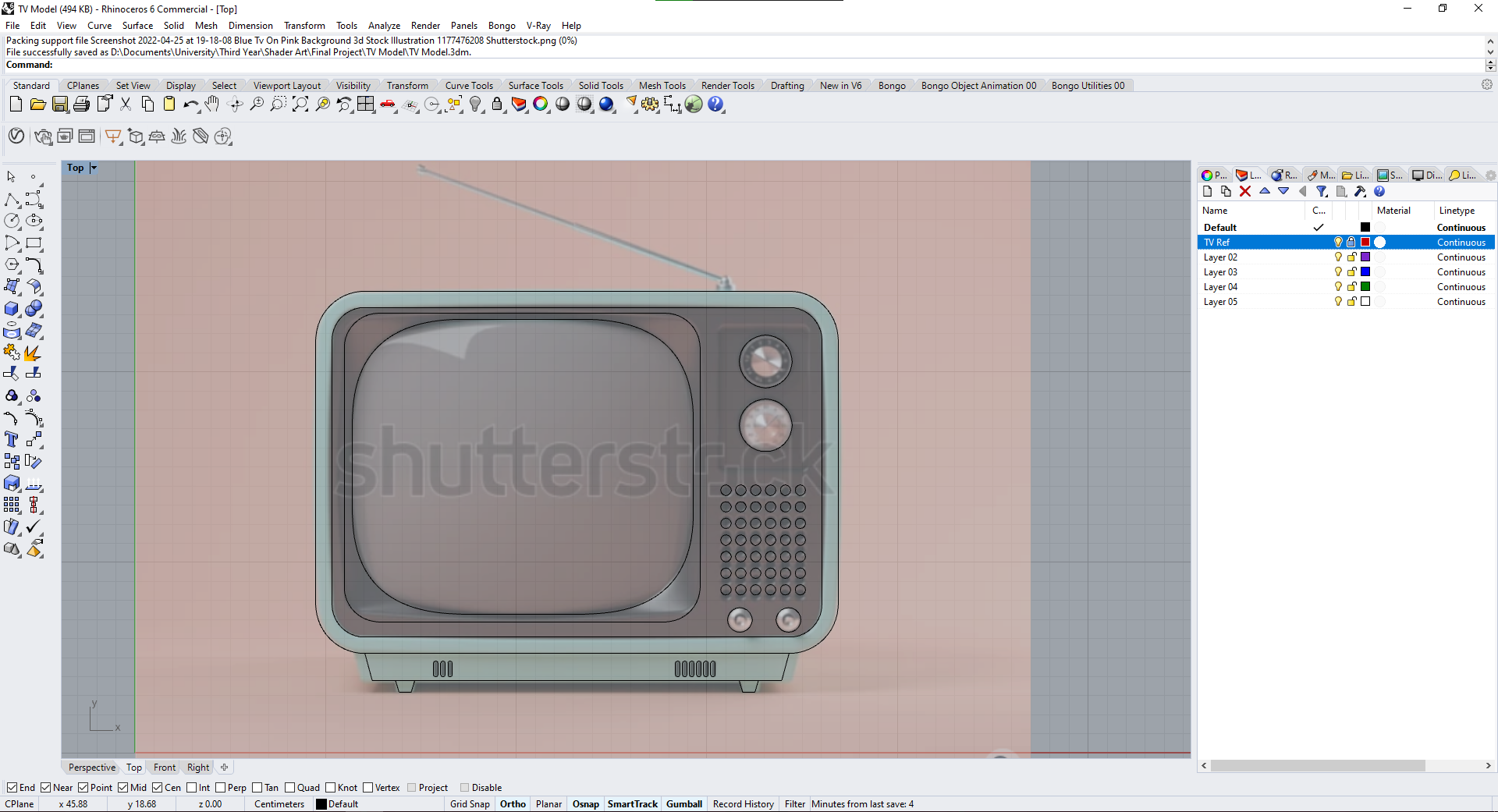 Modeled the screen first to test the UV mapping once the shader is applied in the 3D object: 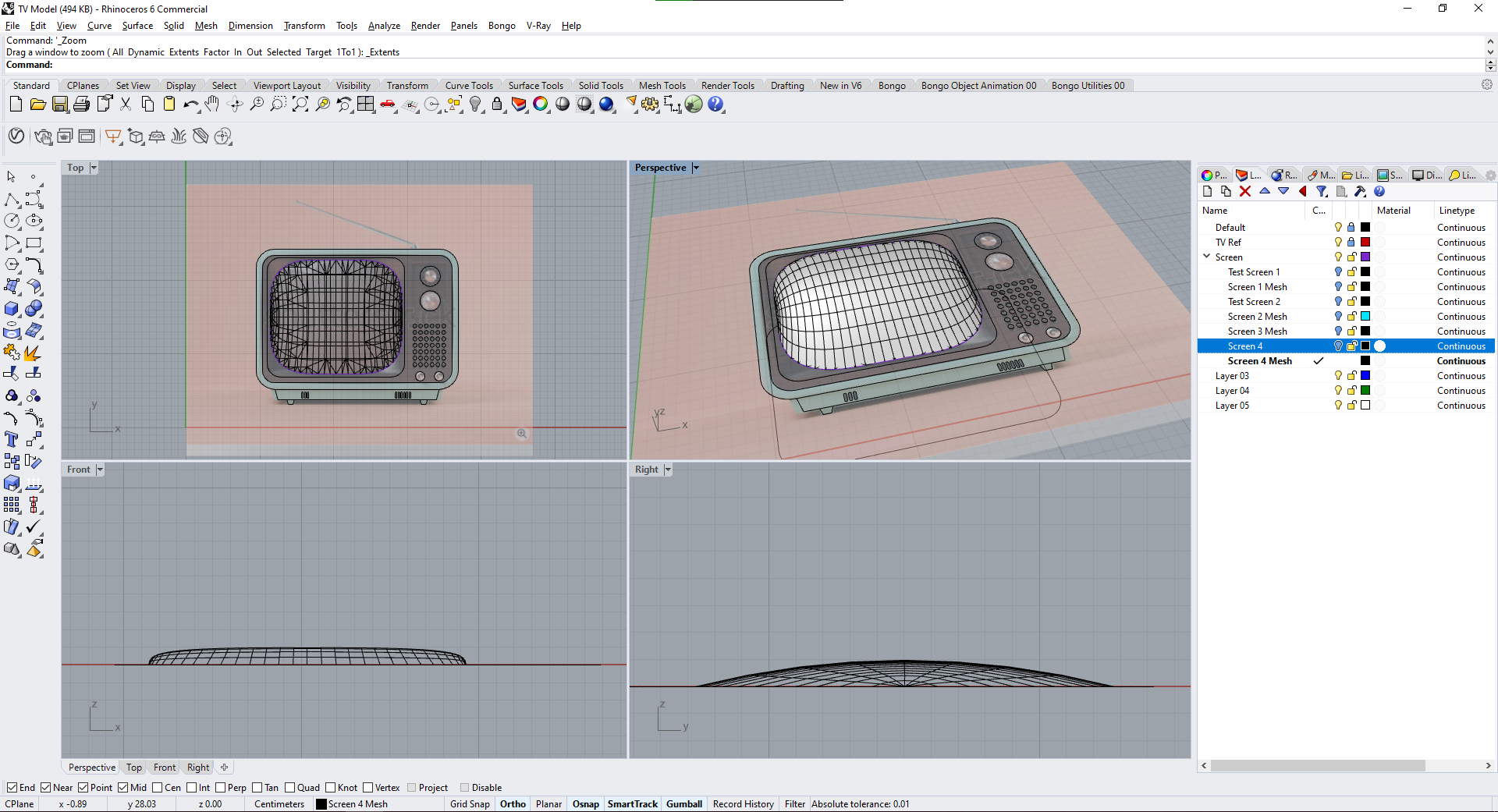 Comparison of the shader when applied to the “TV screen” vs the cube: 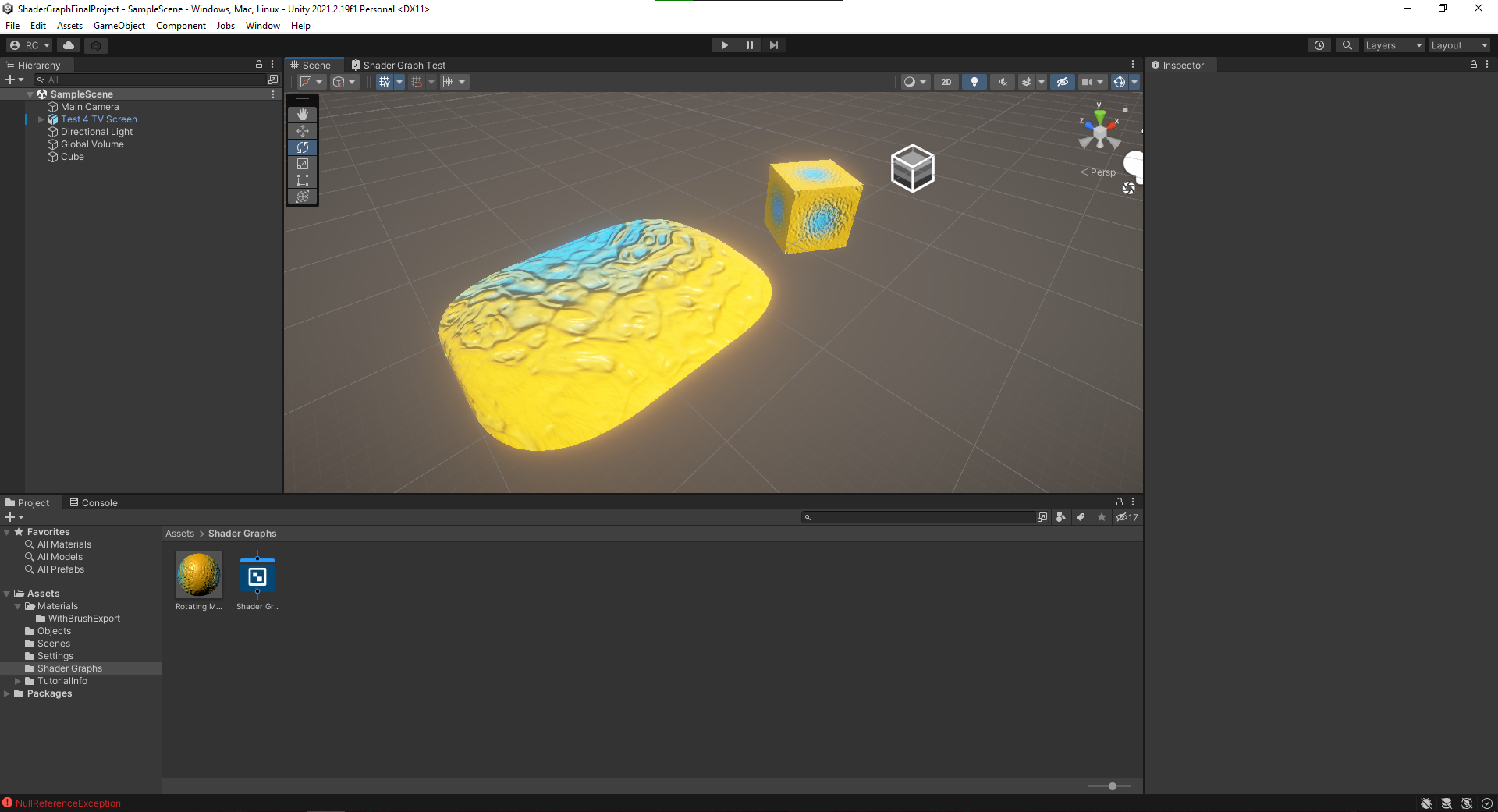 Modelling the full TV 3D object to import in Unity: 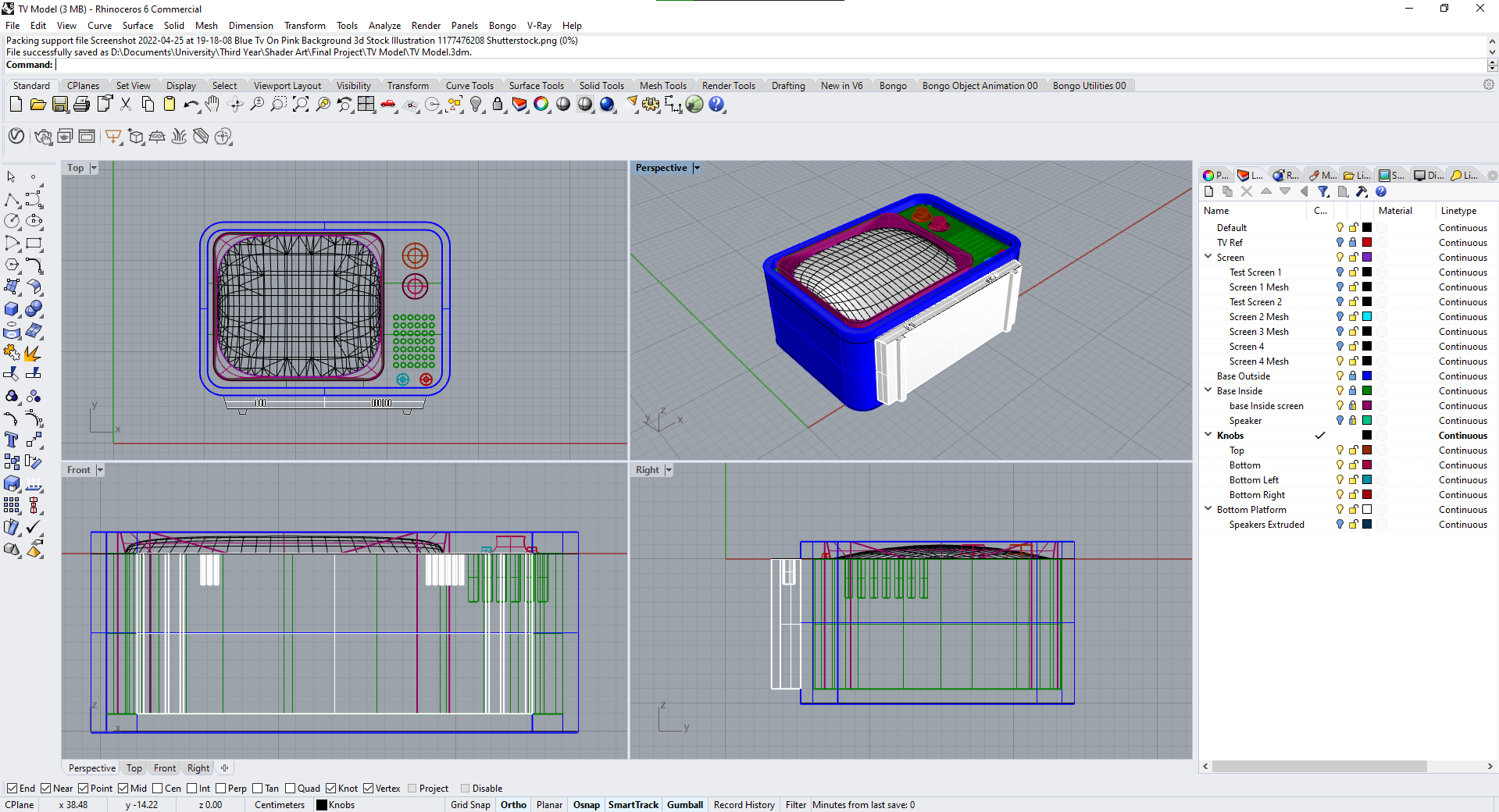 Shader/Material applied in the TV creating different UV maps since it has meshes and not a “whole” mesh: 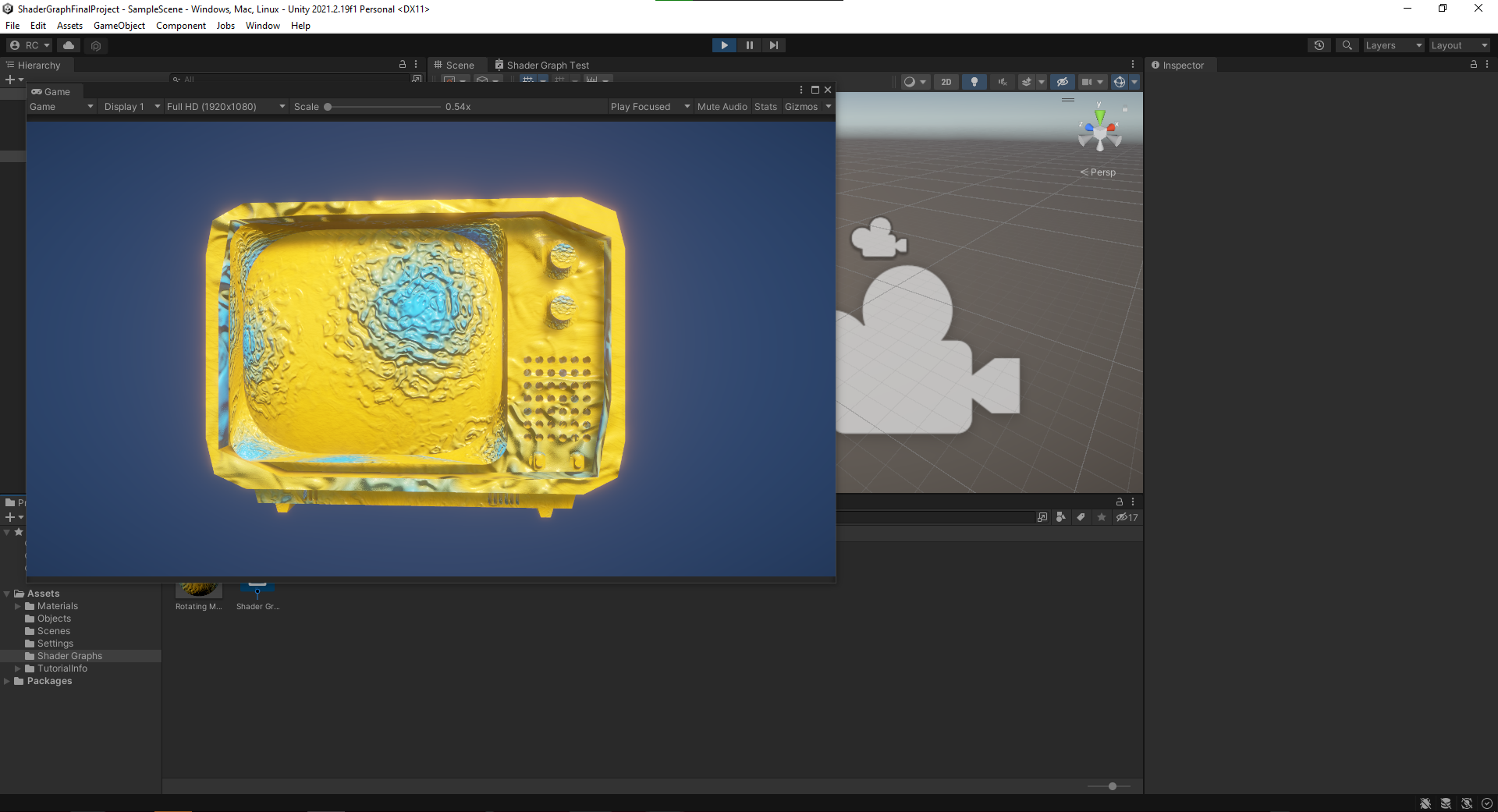 Once the object is already made, and the shaders are applied with no problems, I proceeded to do an environment where the setting is going to be “filmed.”

Using a “Terrain Tool” plugin from Unity to create a landscape: 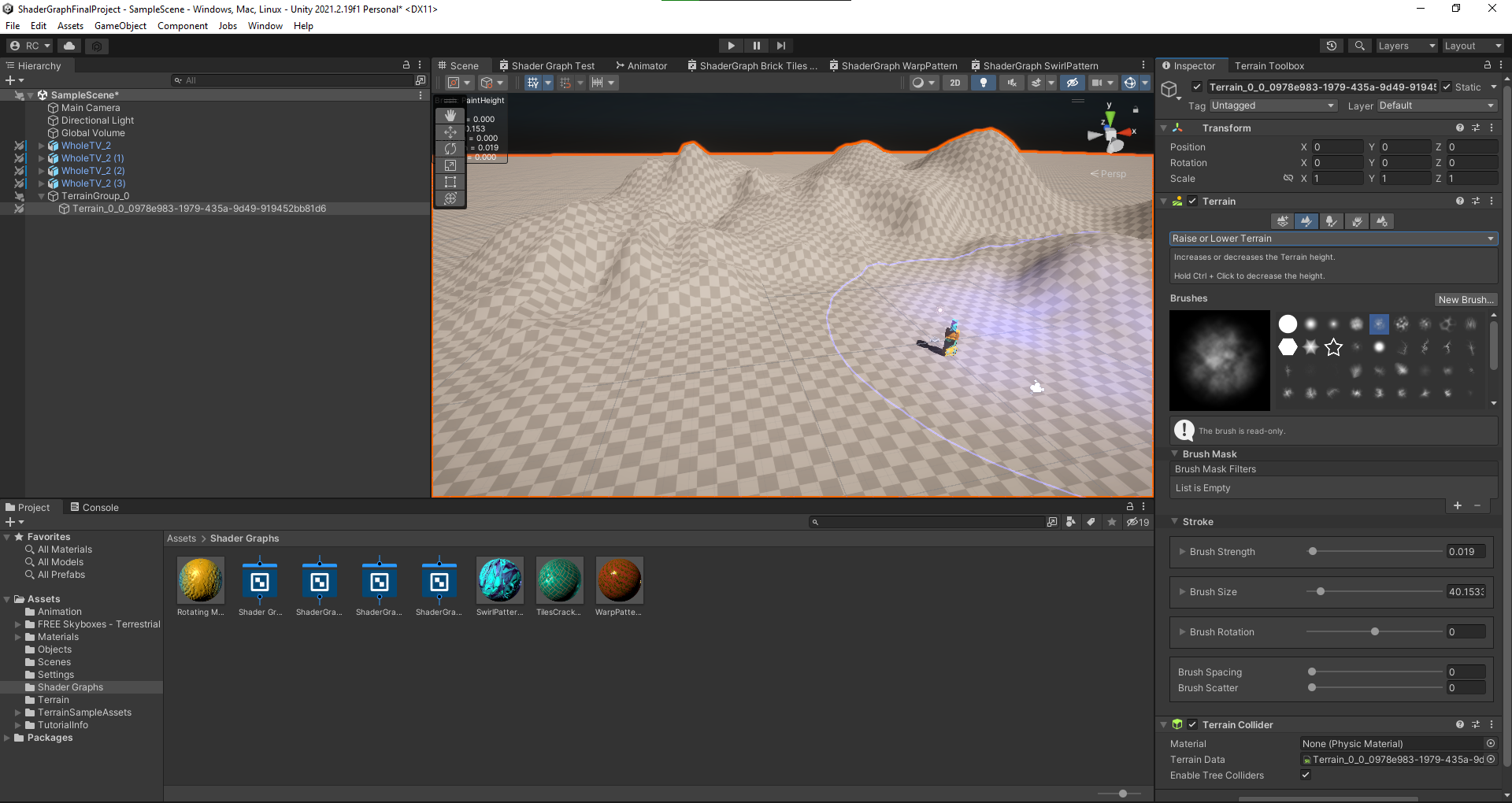 A snapshot of the objects with applied materials in the terrain: 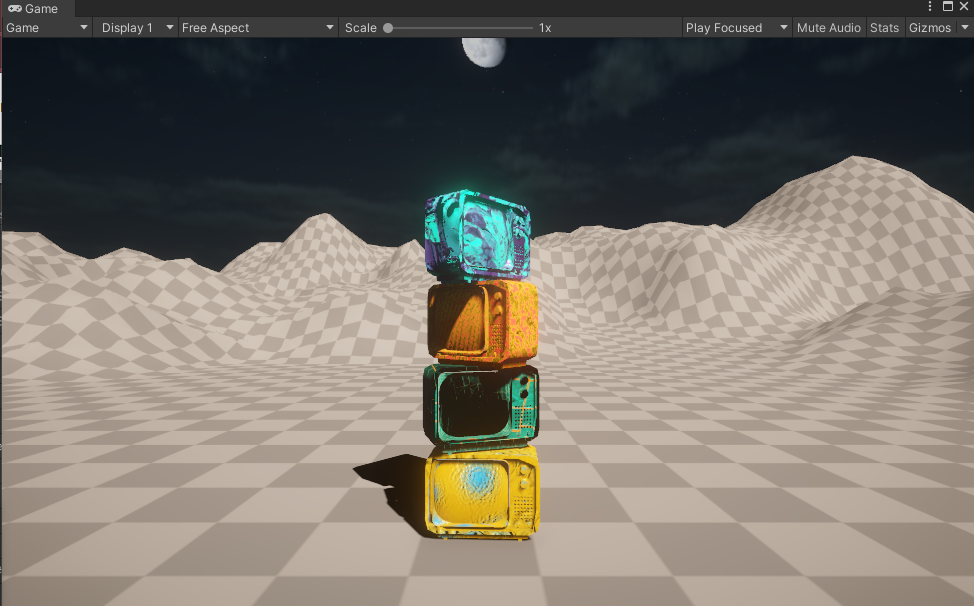 Snapshot from the camera with post-processing and detailed terrain: 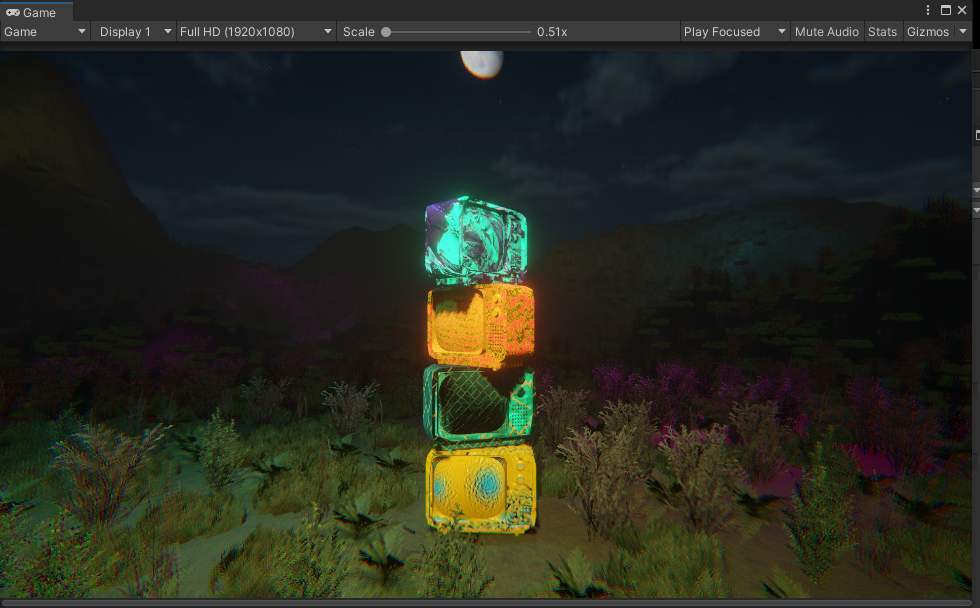 Overview of Unity and animation used to create a loop for the camera to film: 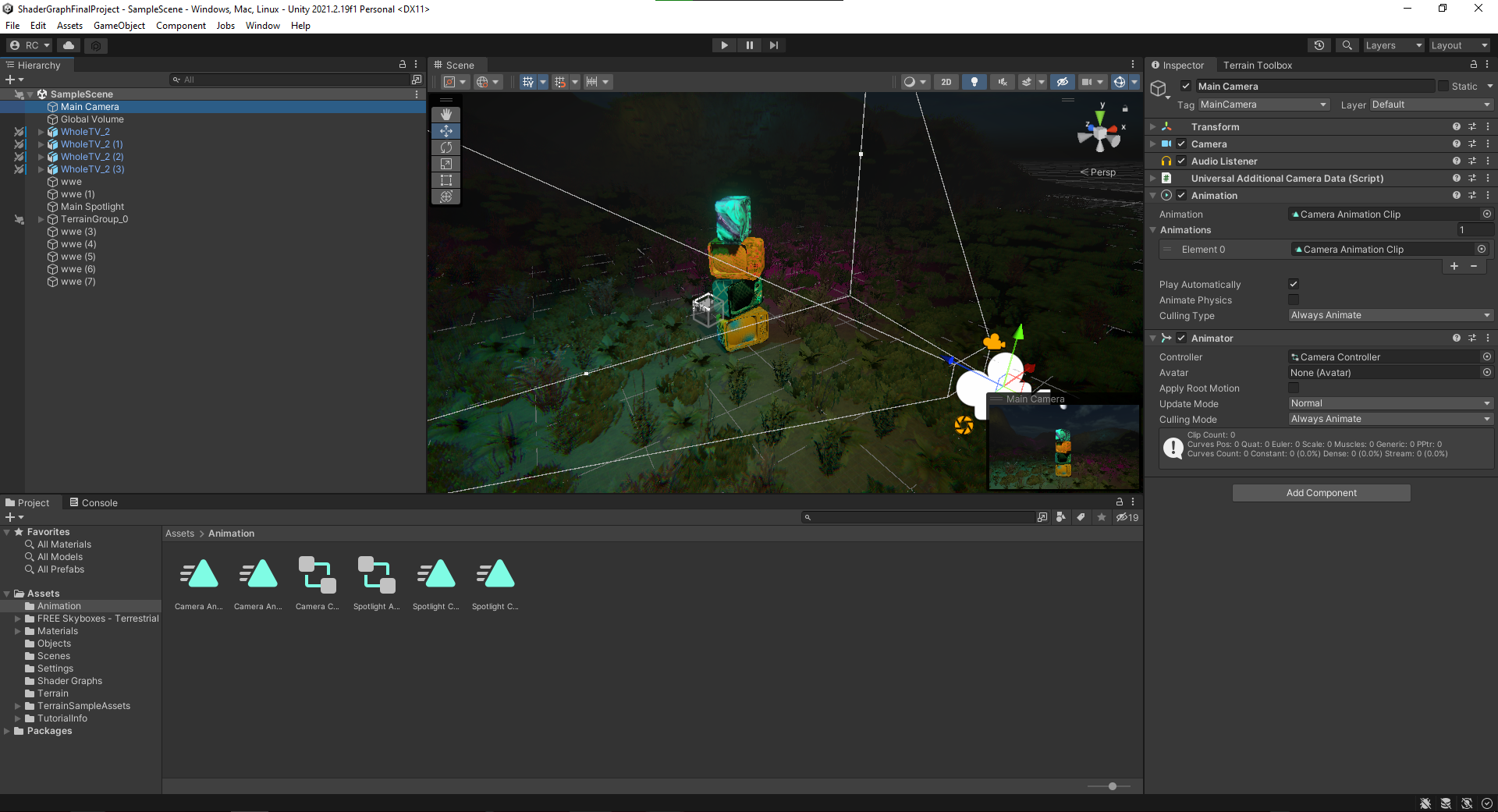 A close up shot/details of the Second shader (Cracked Golden Jade Tile): A close up shot/details of the Fourth shader (Monster’s Blood): 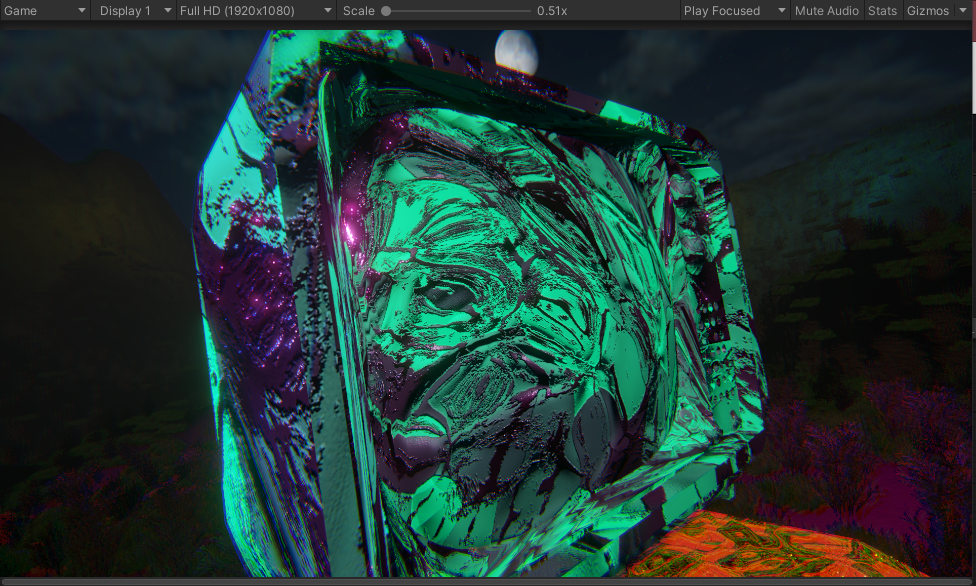 A close up shot/details of the Third shader (Golden Flames): 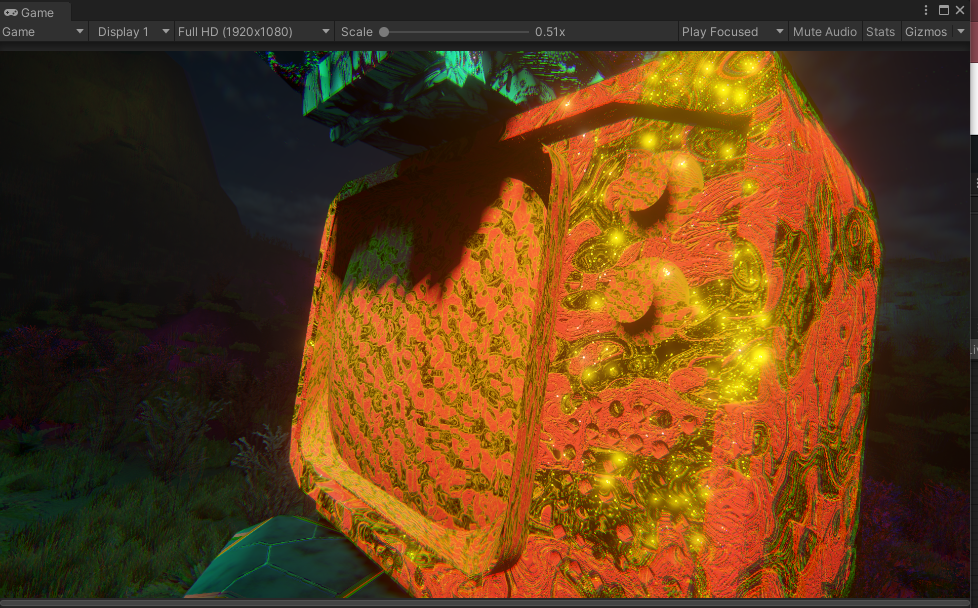 A close up shot/details of the First shader (The Powerhouse Of The Cell): Overall, I actually enjoyed doing the project and I was a bit more comfortable using Nodes for coding/programming. I tend to see the results and changes when doing something visual instead of looking a bunch of lines of codes to work on.
I will definitely work with these type of projects more in the future and continue explore shaders.