My last attempt to make a Doom-related thing didn’t pan out so I figured I’d try again. 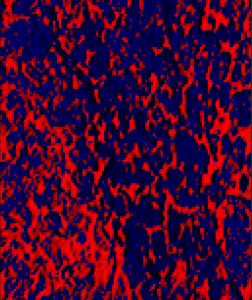 This is fireblu. It’s used later in Doom as you reach more strange and dangerous parts of Hell. It’s kind of hard to look at, and sort of funny, so I wanted to try recreating it in Substance Designer.

So I spent like 2 minutes and made this instantly whoops

That was too easy. The red highlights are kind of gooey, and there’s no texture to the dark blue. I can do better.

Fireblu was some kind of messed up stone texture, but its contrast and brightness always struck me as a lava-like substance, so I figured I should start from there.

First, for the underlying liquid magma, I used the Cells 1 pattern, and manipulated it with warp, blur, and levels until it looked sufficiently rocky, and added a Perlin Noise to warp it around. I gave the colour a bit of texture by blending it with itself a few times and manipulating it from there. Finally, I add some animation by going into the properties of the base Cells and Perlin Noise, and adding a function within its disorder value that changes based on $time.
None of this animation shows up in Substance Designer, so I had to get Substance Viewer to see the animation at work.

For my lava’s crust I’d make a more substantial rocky pattern starting with a Hemisphere Shape. Fireblu’s rock patterns seem more splotchy to me, so for a base Shape I used a Waves pattern. This is heavily Warped, manipulated a little with another animated Perlin Noise, and Min(darken) blended with Black and White Spots, which was a really good texture to use for a more dusty or rocky look. After fine tuning it a bit more in levels and bevelling to cut down our splotchy pattern a little more, we send it over to FX-Map to make our pattern smaller, and to put it all over our shader, with variations of size, rotation, and locational offset. Before we give the top pattern a colour I added another animated Black and White Spots texture to sprinkle some more rocky texture and also to make the red colouration shift around a bit over time.

Emissive was used rather than the standard ambient occlusion. I wanted both lava and fireblu to have a little glow.