As we spend most of the time at home during the Coivd-19 pandemic, the idea of home fitness and indoor workout tends to become more popular. Squatting is one of the exercises that I found extremely beneficial and can easily be done anywhere. Personally, I do squat every day for exercising and keeping myself motivated. Doing squats helps to strengthen the core and the muscles of the lower body.

Squat Mate is a wearable device that monitors the user’s posture when squat to exercise. It is designed to be worn on the top of the user’s thigh, to detect leg movement. There are three LED lights on the device to represent three modes of the signals. (1)When standing still, the yellow LED lights up to indicate that the device is turned on and the user is not moving. (2)As the user squat, the orange LED lights up, indicating the user is squatting at a proper depth. (3)If the user squats and bends their knees beyond 90 degrees, the red LED lights up and warns the user. Going below a 90-degree bend puts lots of weight on the knees and can cause injury. The goal of the device is to help the user maximize the squatting exercises safely and correctly.

The device mainly consists of a circuit and a pouch with adjustable straps. The pouch is made of acrylic felt to hold the circuit board and wires. Three LED lights are sewed on the pouch with conductive threads for connecting to the circuit with alligator clips. The adjustable straps are made of sturdy ribbons with velcro tapes sewing at both ends, allowing the user to put on the device according to their thigh circumference. The detection of the leg movements is based on the accelerometer data of the Arduino IMU sensor. It reads the bending angle of the leg and triggers the corresponding LEDs to light up. Squat Mate is a wearable device that belongs to the movement sensing category. According to Clint Zeagler, “placing the sensor on the thigh or just above ankle would be appropriate.” The visible feedback of LEDs is also easy to read because of the placement of the device. 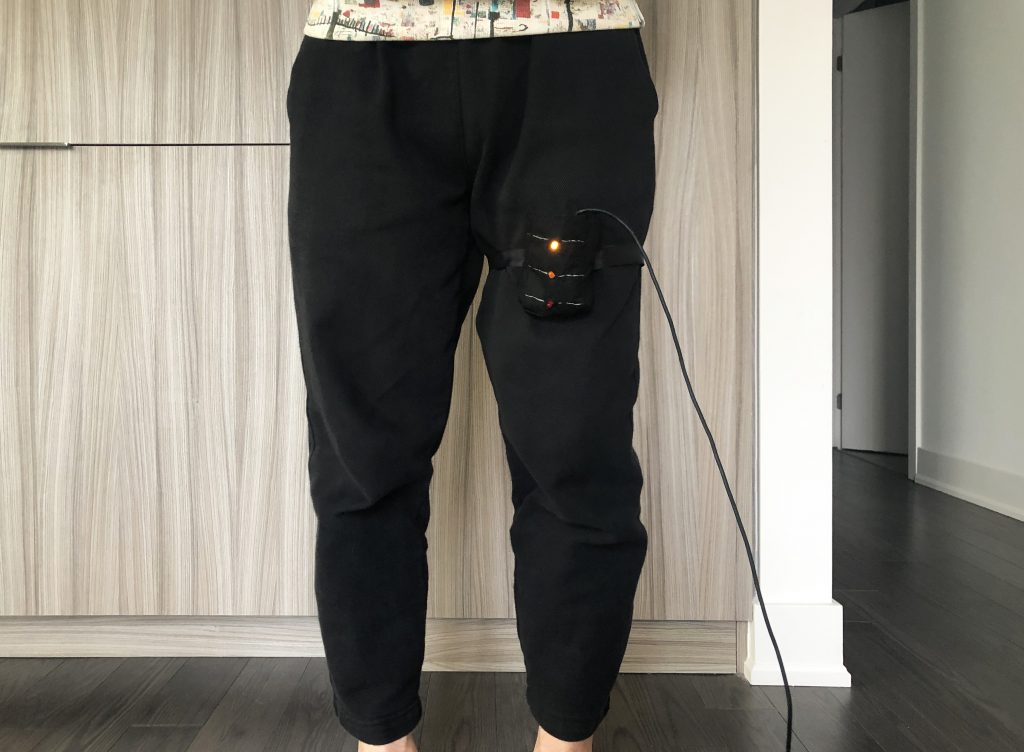 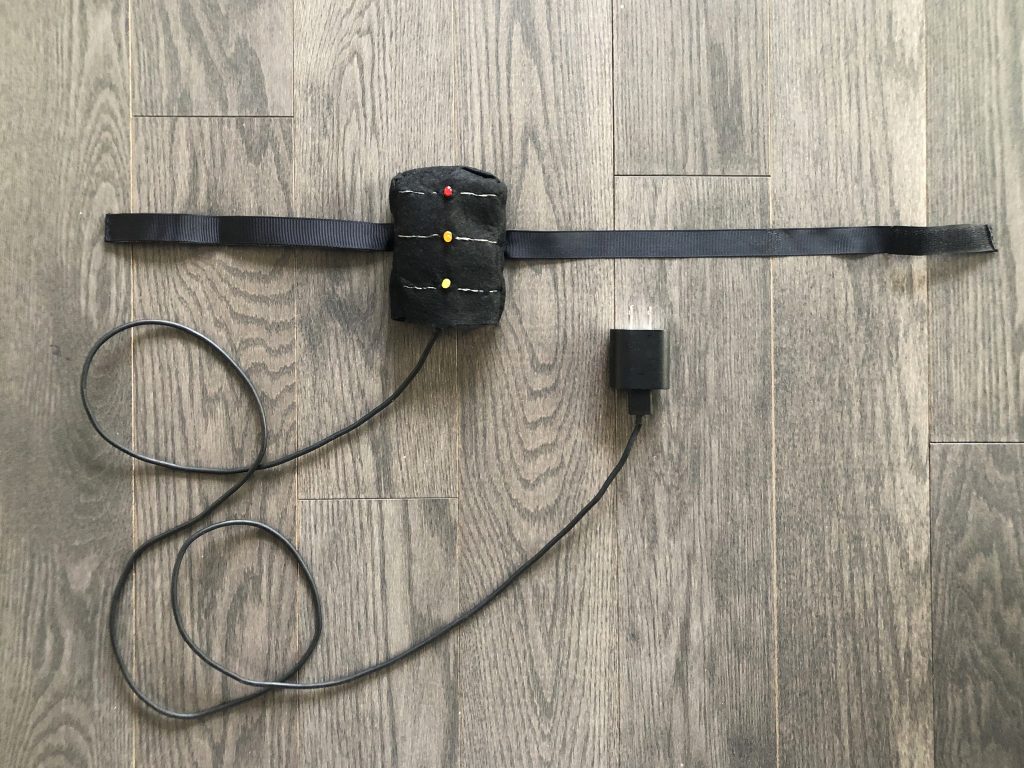 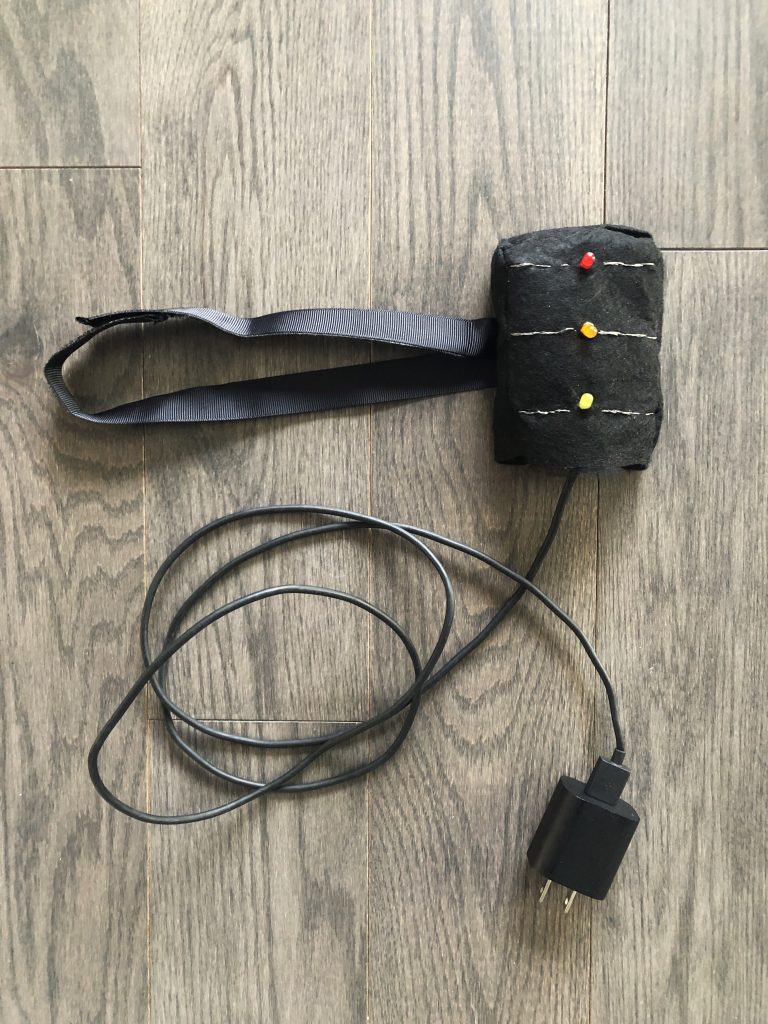 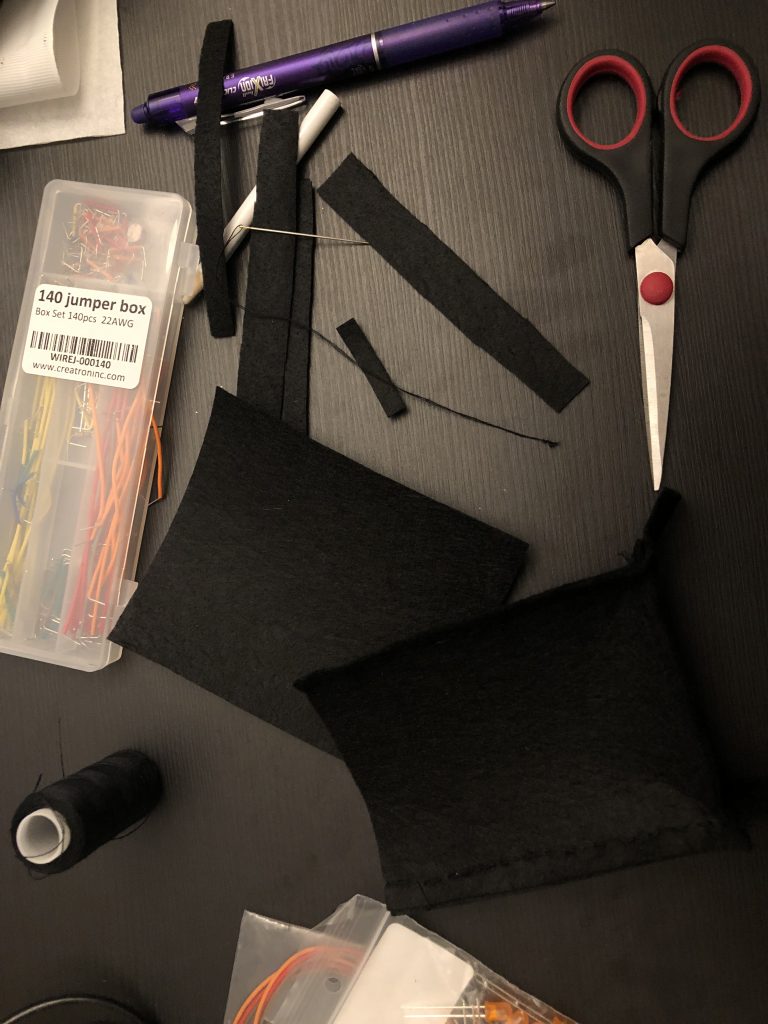 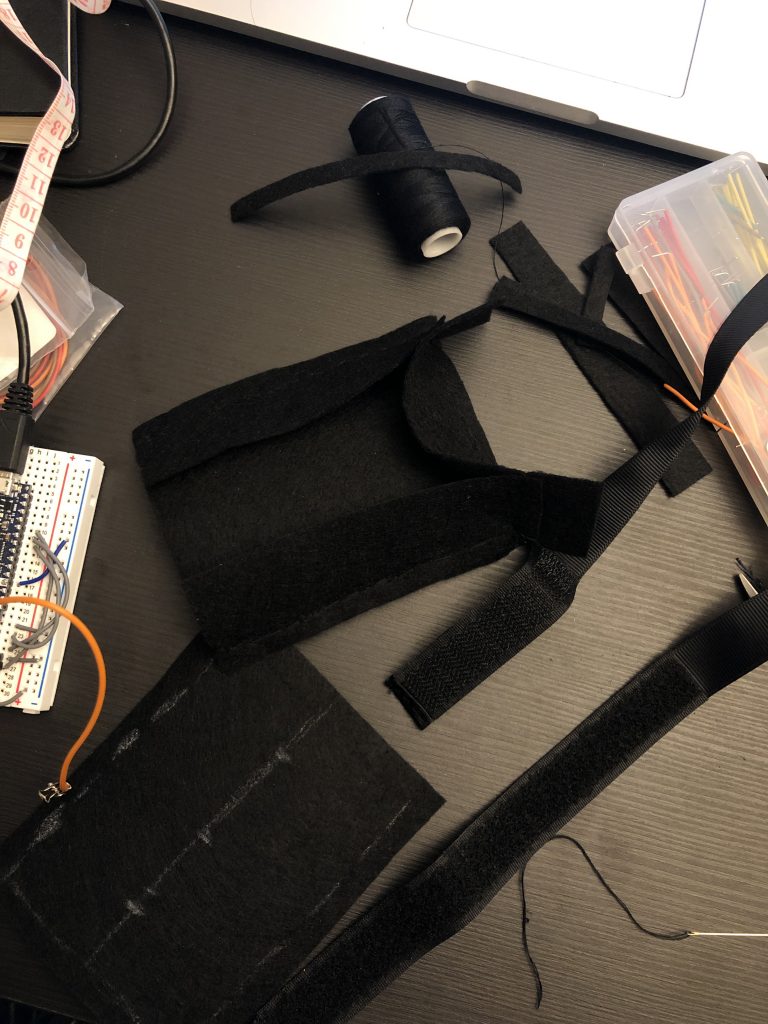 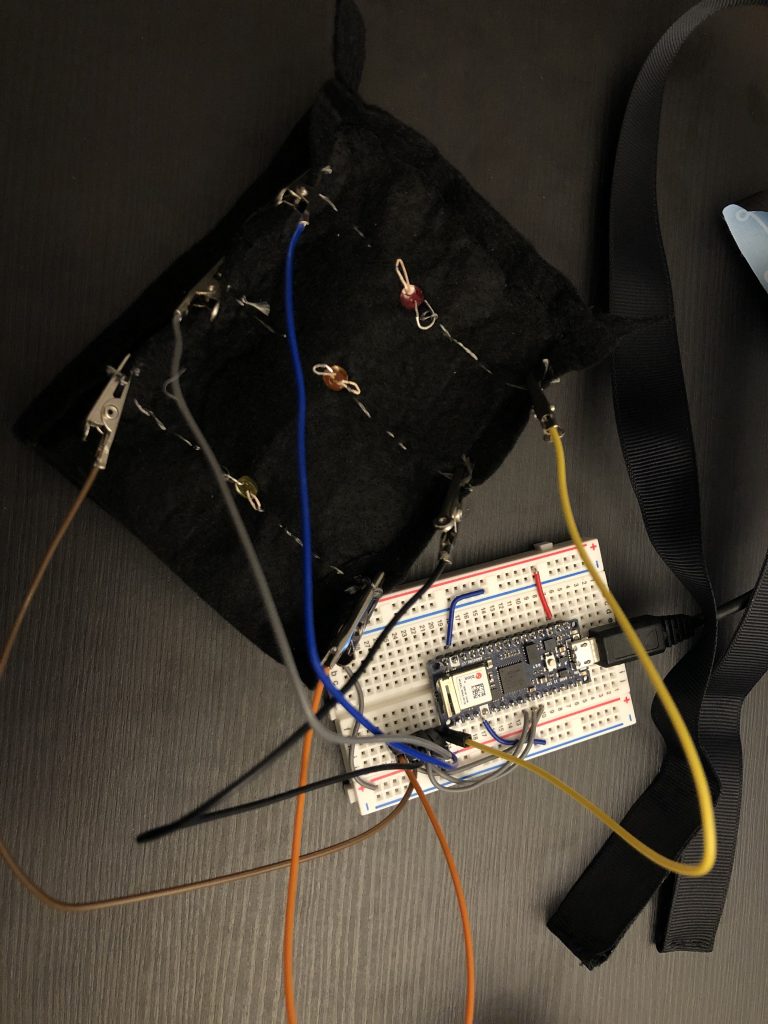 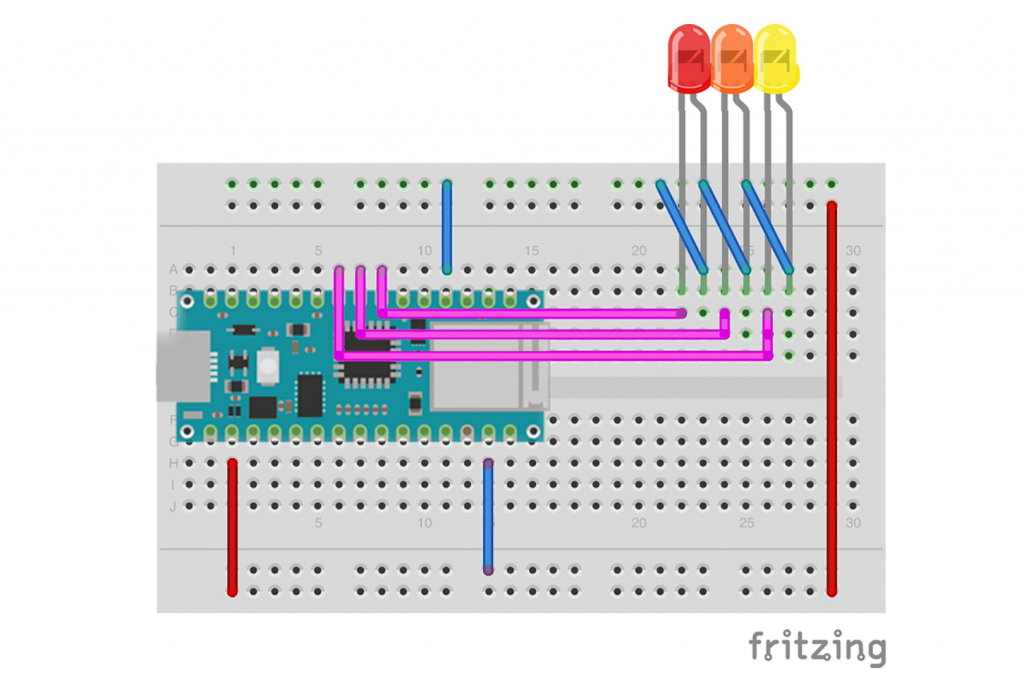 Using the wearable device for tracking body movement or fitness has been quite popular. Notch Wearable Sensors can serve as a practical example. The notch is a motion capture system with up to 18 IMU sensors for detecting an athlete’s movement. You can purchase it as a kit and each kit comes with 6 sensors. Its LED lights system is designed to identify different sensors and where they are supposed to be worn. Each sensor unit contains 6 different colored lights. As the user selects a configuration for Notch on the phone app, it automatically assigns one color for each sensor. Similar to the Notch, Squat Mate also detects body movement and uses a velcro hook for fixing the device on the user’s body part.

Another related example would be the Heart Rate Monitor by Dmitry Dziuba from the MIT lab. This device is designed in the form of a watch, for the user to wear on their wrist. I found the design beautiful and well-integrated. The most eye-catching feature of its the bright and colorful Adafruit NeoPixel Ring that lights up or changes color as the user’s heartbeat changes. The concept of the Heart Rate Monitor and Squat Mate aligns – track body movement with IMU sensor and display them as visual feedbacks using LED lights.

There is another example with a really interesting concept and mechanism but very poorly constructed. This is a prototype from a youtube channel called Ultimate Robotics. The prototype integrates muscle controlled Electromyography (EMG) to control LED lights with the movement of fingers. Although the use of EMG is super creative and interesting, the prototype itself provides discomfort to the arm and the LEDs are not integrated into the design.