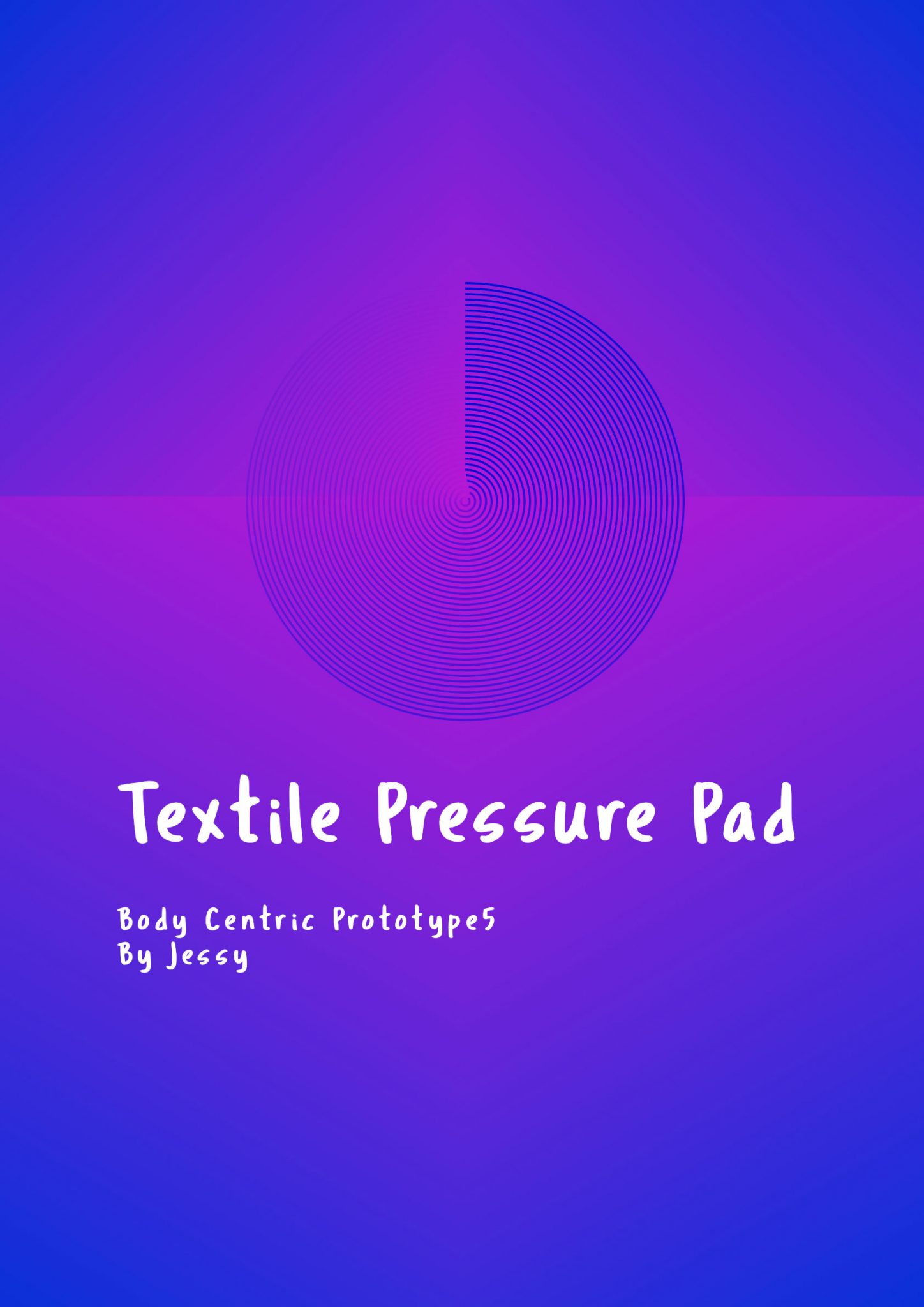 Basically, the textile pressure pad is using common fabrics which is non-conductive to sense the pressure and output analogy data. The idea is referred to the method called ‘Polymerization of pyrrole’1, which is allowing conductive polymers to form in and around textiles, coating their individual fibers. Before making this prototype, I did a set of comparative experiments which demonstrate that sponge works well for sensing pressure. Being soaked in a water-soluble graphite conductive solution,  the interstices of the sponge are filled with graphite particles. It makes the sponge conductive, at the same time the deformation makes the sponge can work as Velostat to output analog data. Then a conductive copper tape is attached to the non-conductive leather material. Finally, all the components are stacked together in the shape of a sandwich to form a textile pressure sensor. 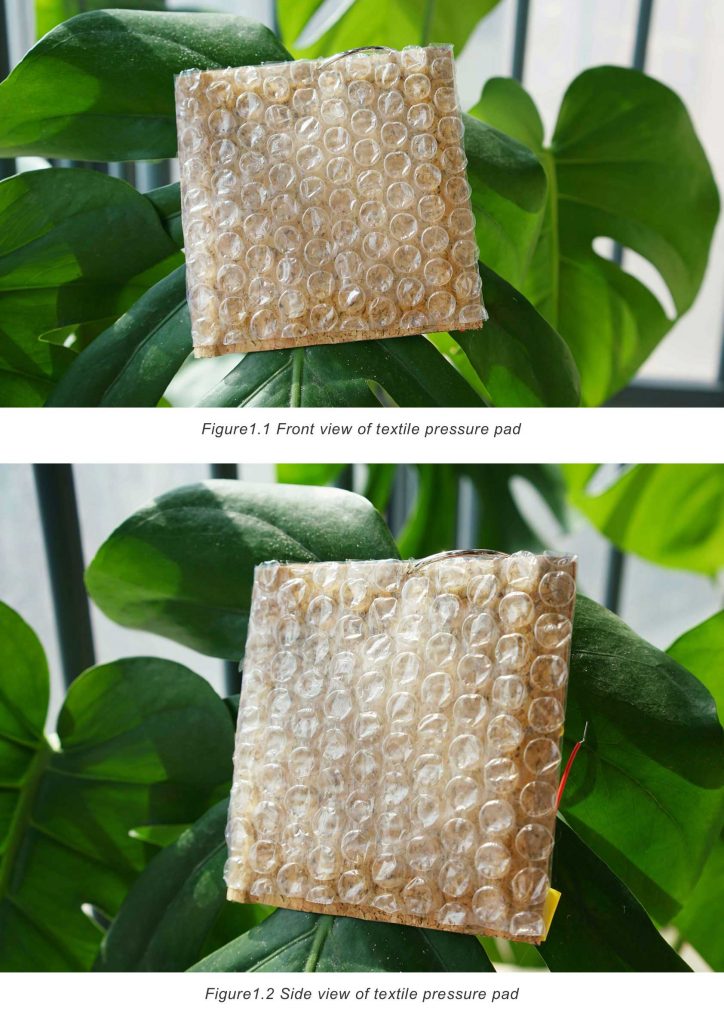 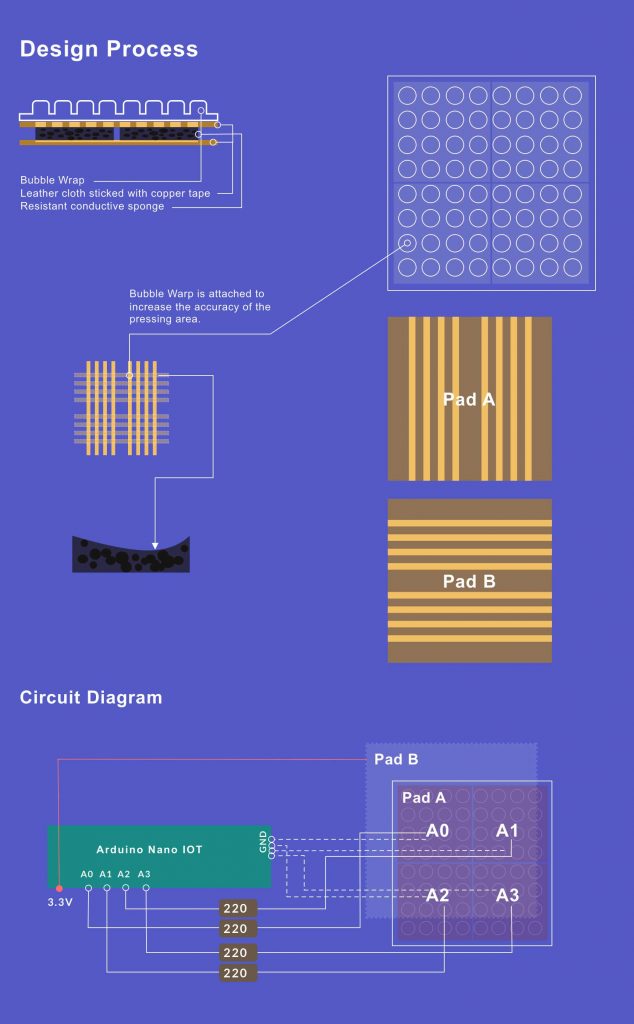 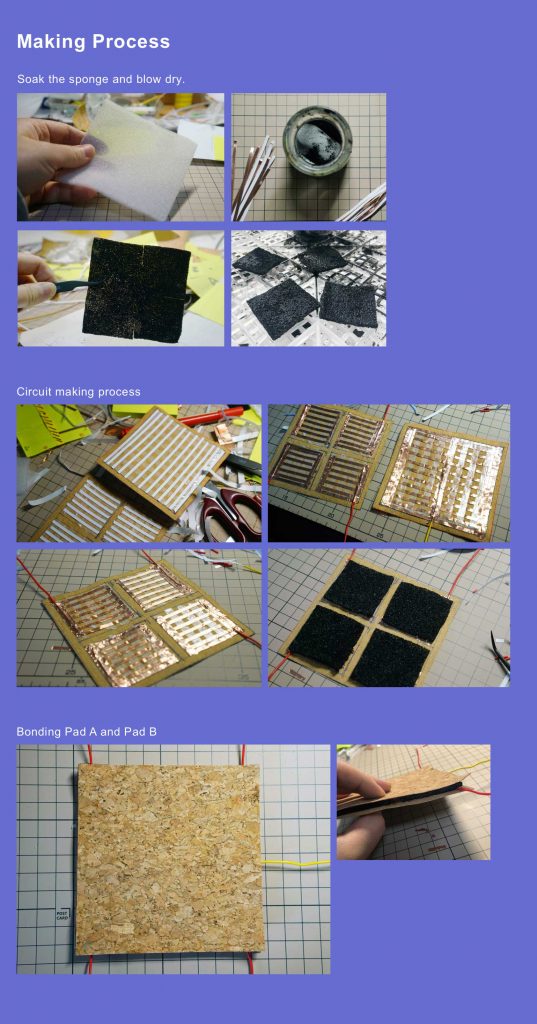 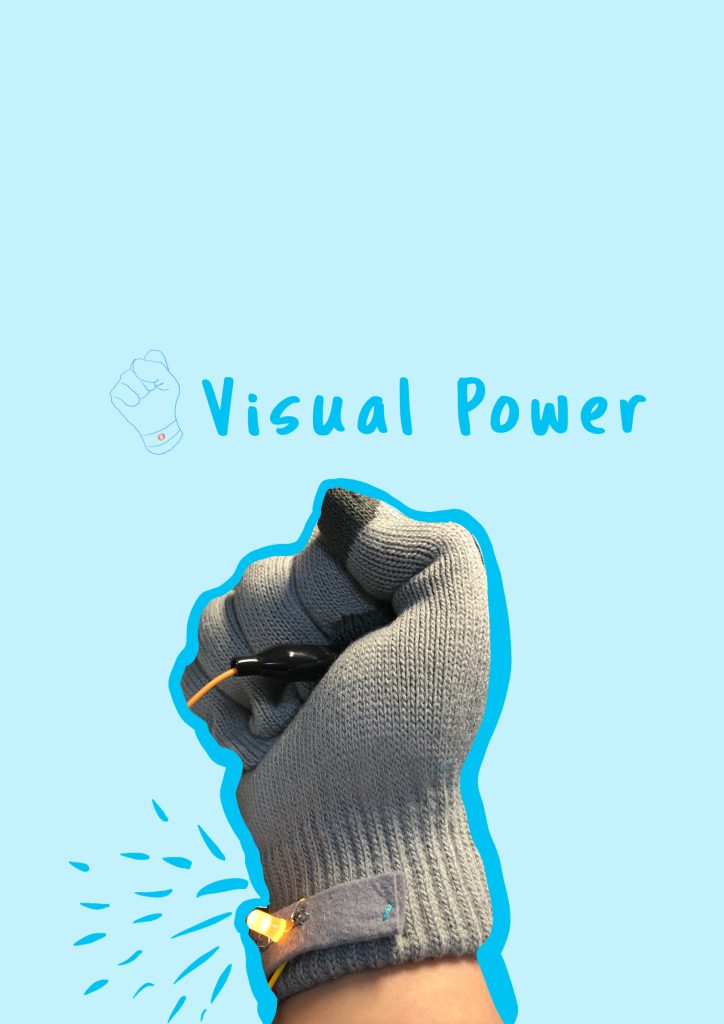 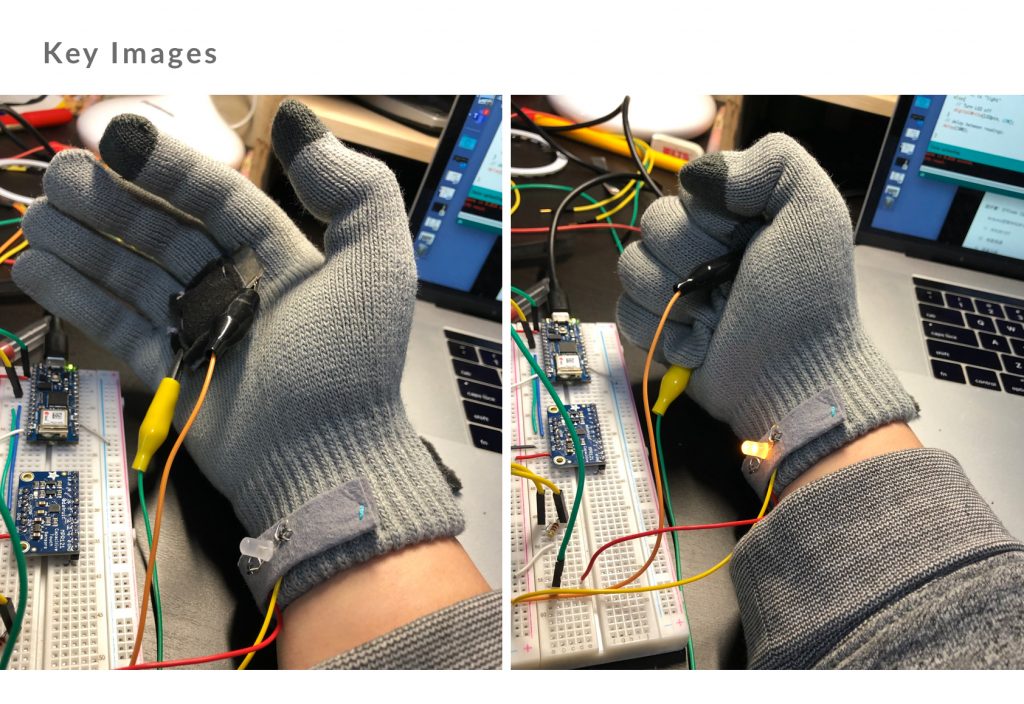 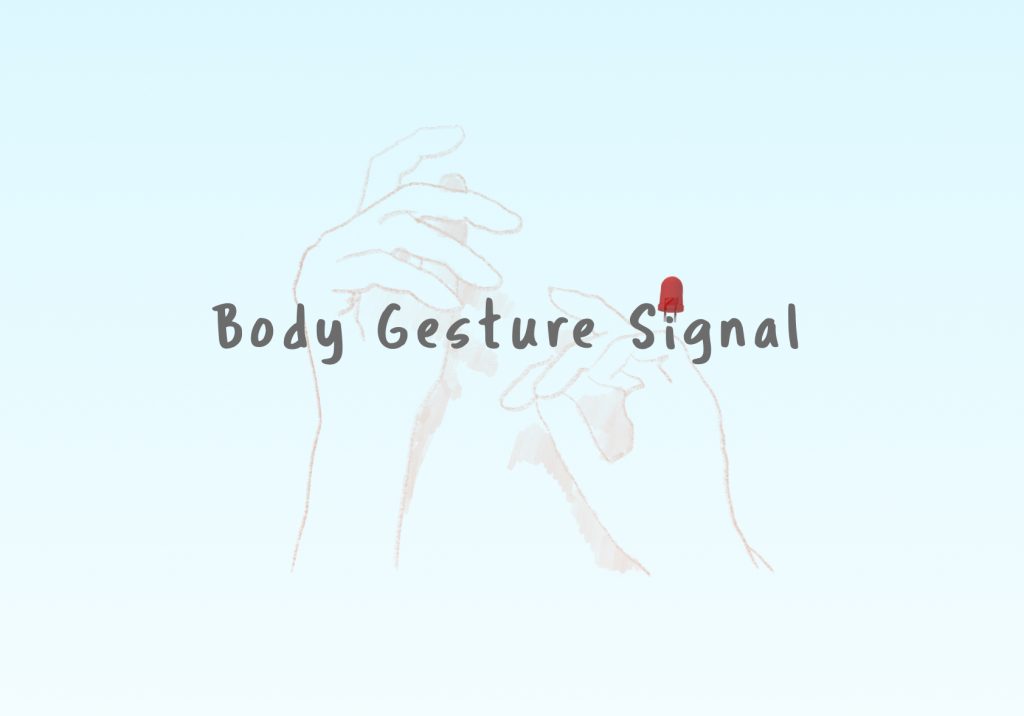 Visible Pulse is an installation that combines the finger and the wrist as a trigger to switch on. The wrists are the more flexible part of our body and the place where we can feel the pulse. Whenever the finger touches the wrist, the LED on the switch starts to blink, which can be considered as a simulation of the pulse. The working principle is based on a touch sensor (Adafruit MPR121) and using a skin surface that is conductive, as a basic switch. 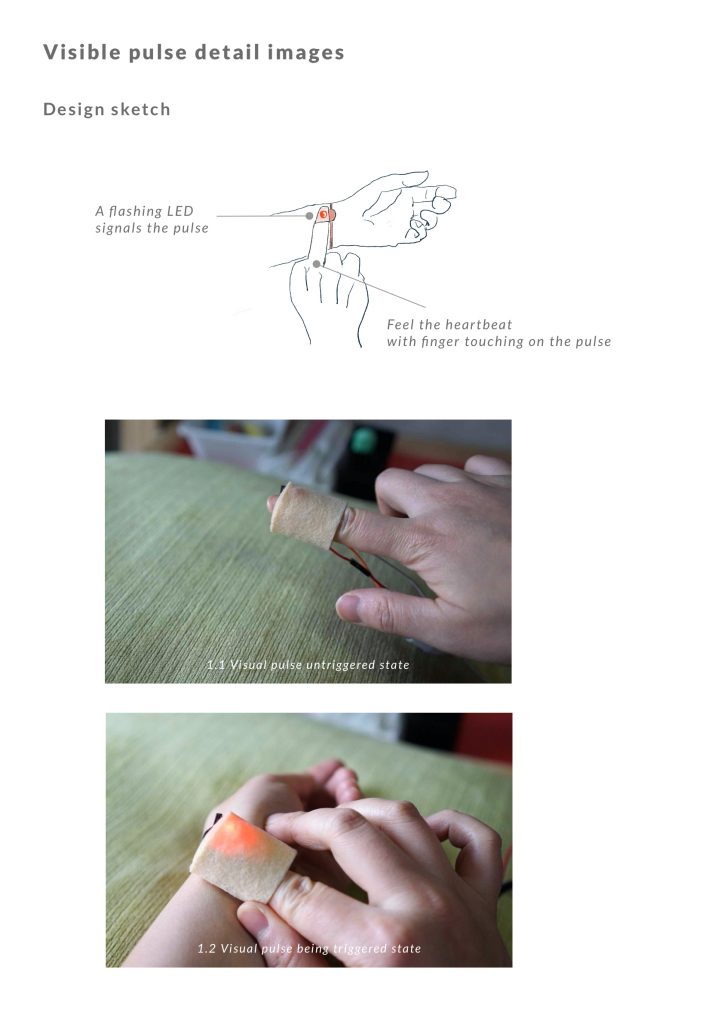 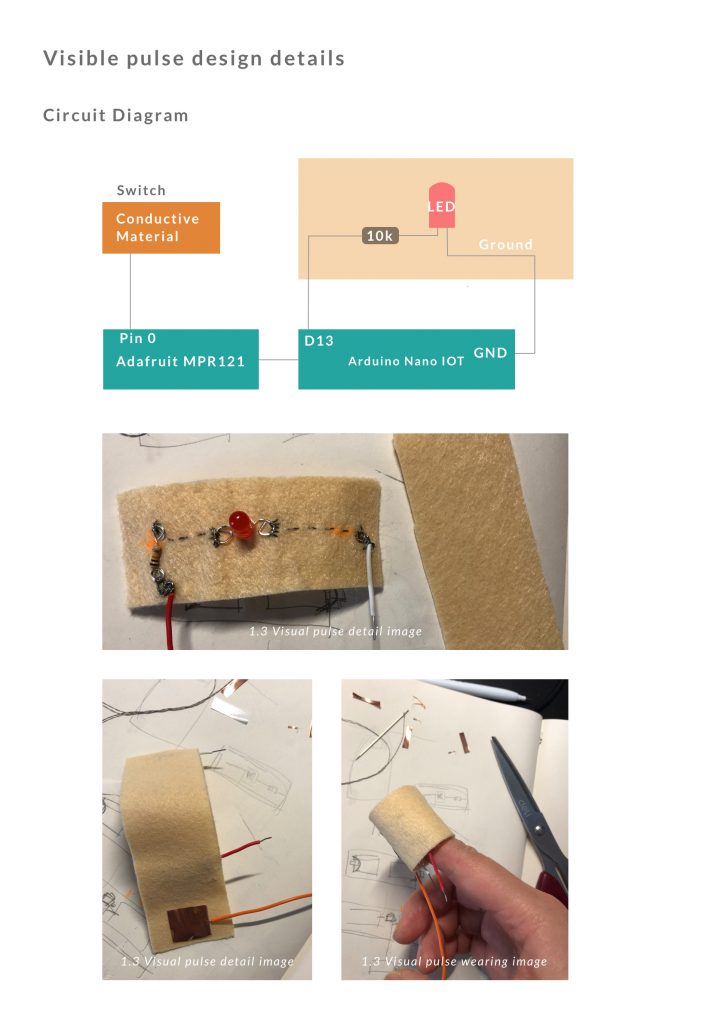 Idea Bracelet is also based on a touch sensor (Adafruit MPR121), there are normal material and conductive material that covered the third finger. When snap fingers (usually using the third finger), the LEDs embedded on the bracelet will be sequential light up. Whenever we get a new idea, we may snap our fingers involuntarily. The emotion brought by this action is dynamic and happy, so I use this action as a switch to trigger the LEDs. 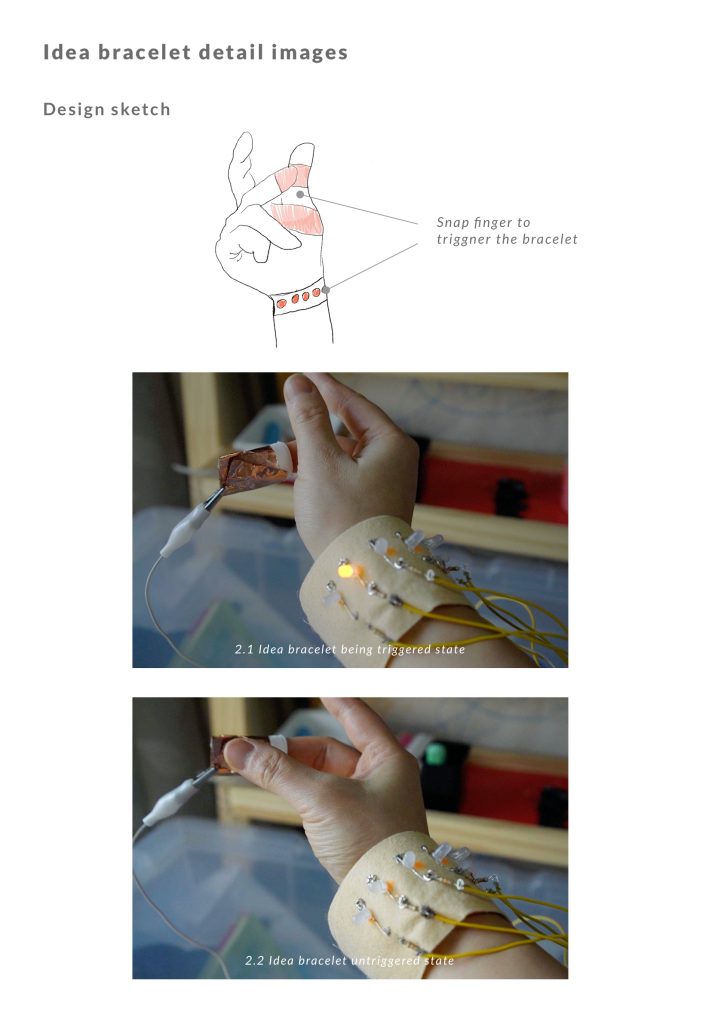 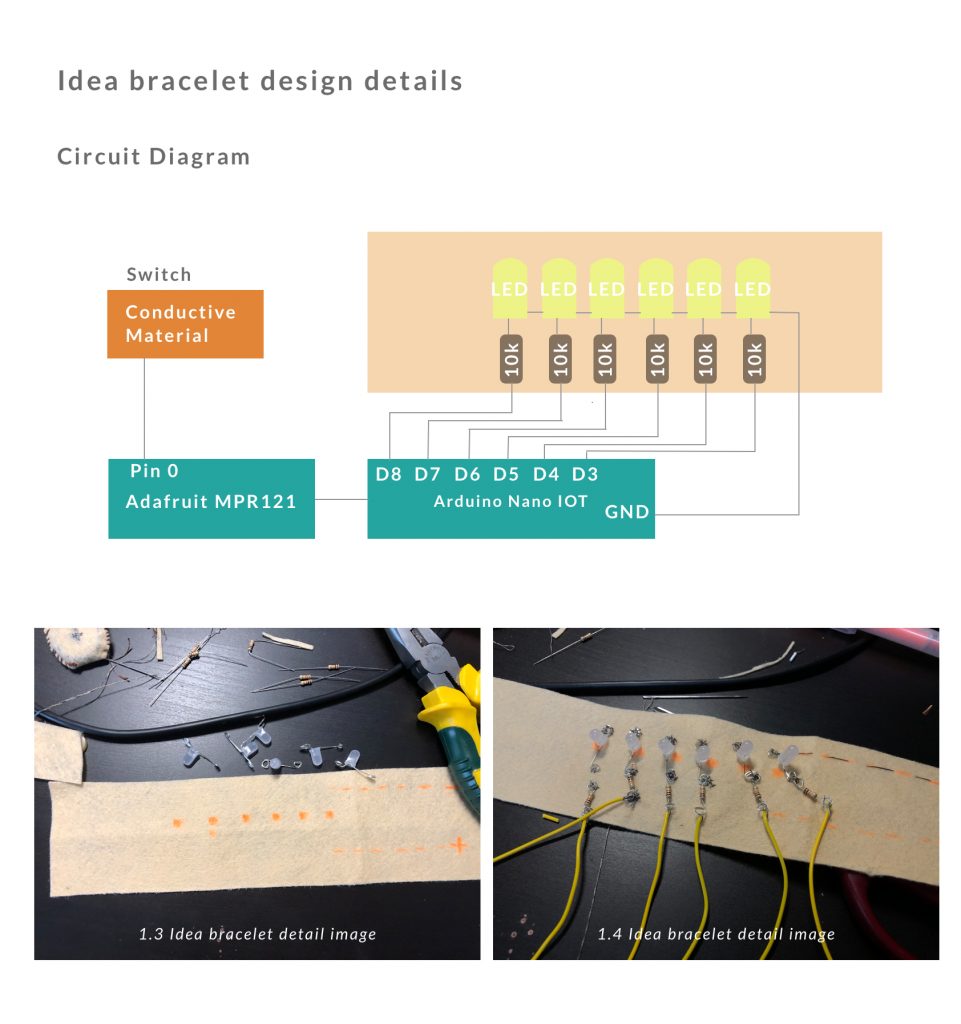 This is a wearable installation that being triggered by running and the working principle is also realized by the touch sensor (Adafruit MPR121). Running is an ordinary activity and people usually swing their arms during running. Basing on this regulation, I use running gesture as a trigger of this wearable insulation. Firstly, sew the conductive fabric onto ordinary clothes, and installed an LED matrix as signal output. Whenever taking action of swing arms, the LED matrix will be light up. 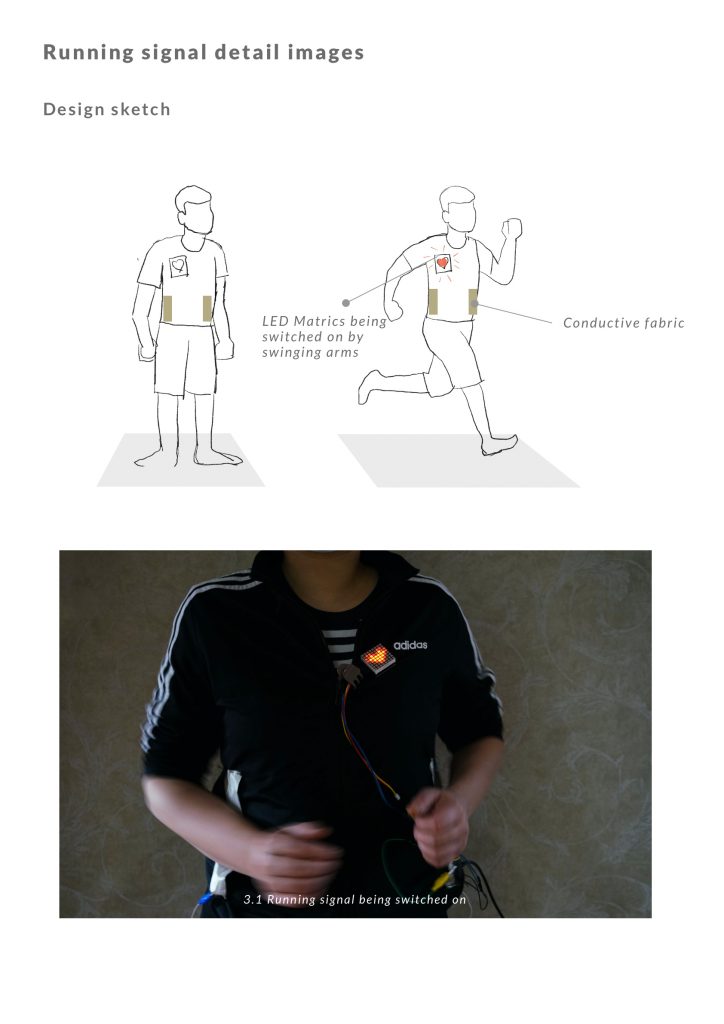 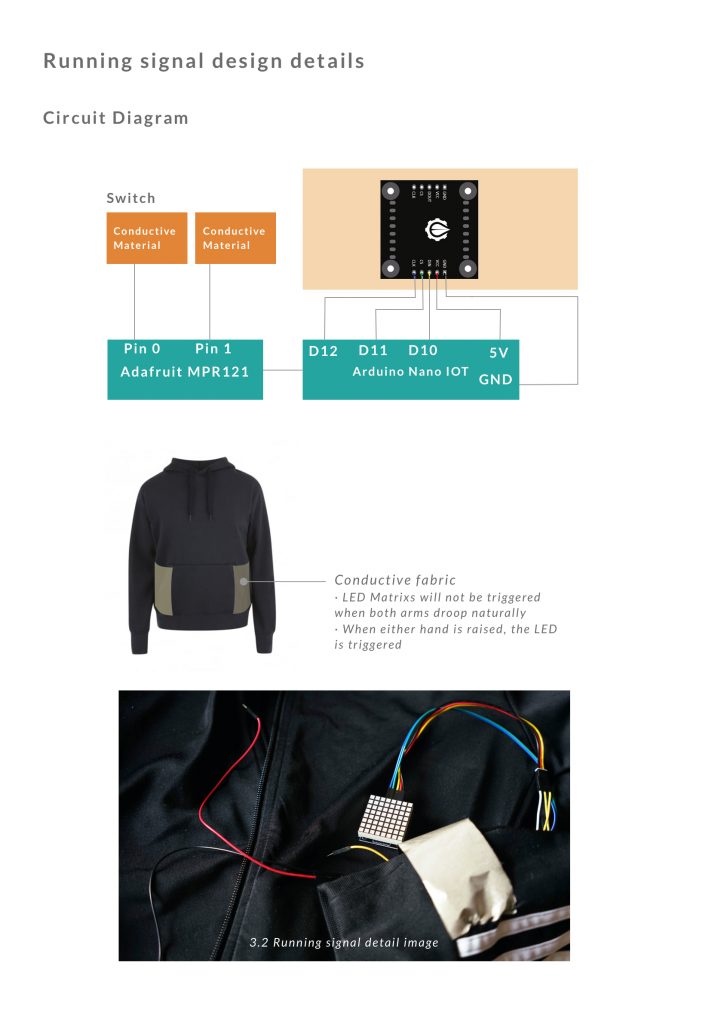 In this series of prototypes, I found the body as an interesting switch, and I began to pay attention to movements that are often overlooked, especially gestures, like when we tap our fingers, that is probably we are waiting for something, or we seldom feel the change of facial expressions. These actions sometimes can be an indication of the internal change which may be missed by ourselves. In my work, I want to use a simple action or gesture as a switch to trigger the installation and I think there should be more sensors being applied, such as pulse detection. More specifically, in the first work, the Visible Pulse, at present, the signal can not be exactly a real one without pulse detection. So for further modification, I need a pulse detection sensor to obtain real data and convert it into the visible LED signal. When each finger touches the wrist, it will reflect a real pulse signal. 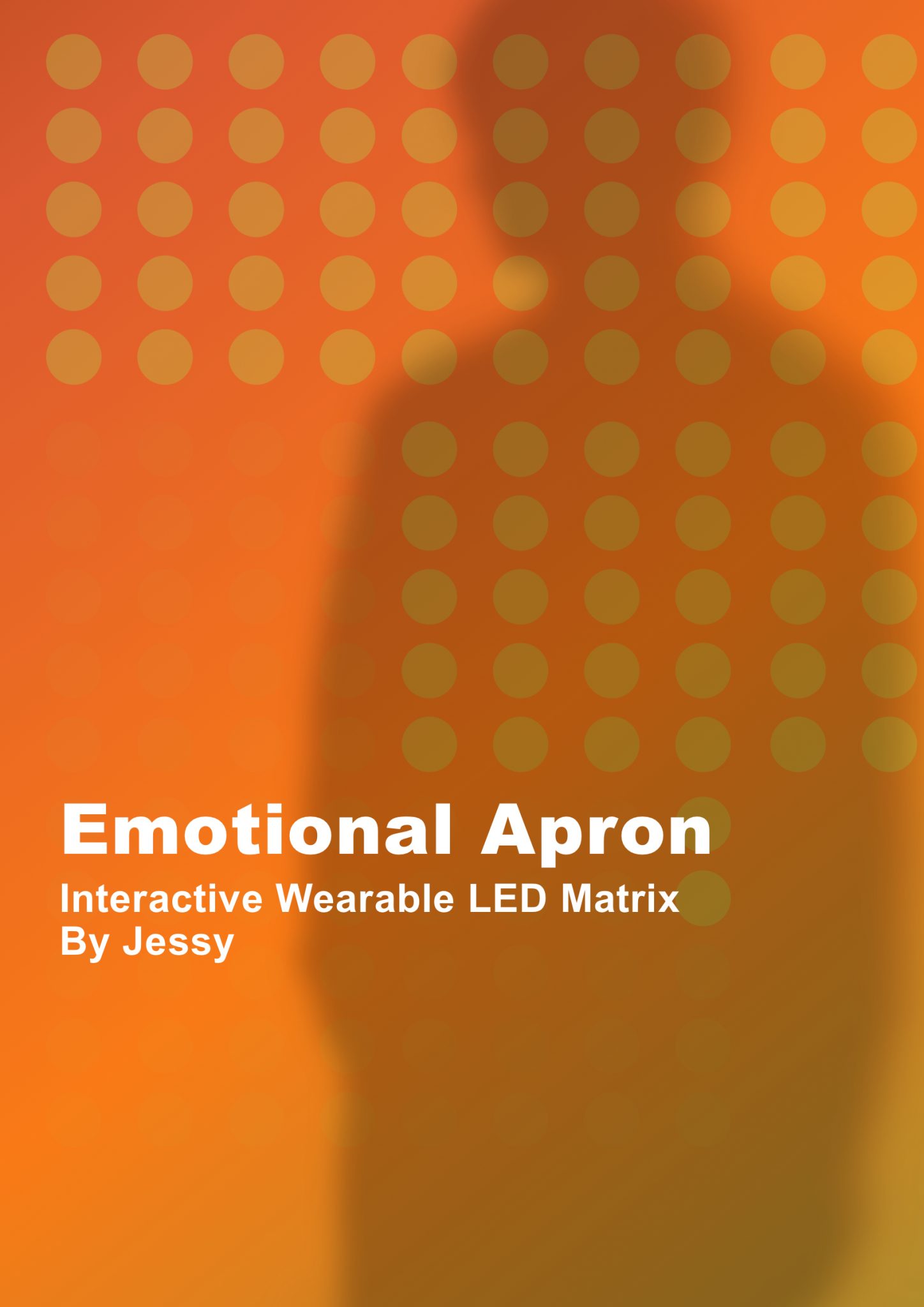 The emotional apron is a wearable led matrix and its color will change according to the environment. There is a sound sensor attached to the apron and connected to the Arduino board. Technically, the sound sensor is an input port and triggering the led matrix to make changes. There are totally three states of this led matrix(see image 1.1-1.3), specifically, the led matrix will show a blue state to indicate the out space is sort of quiet, and change to red-state when in a pretty noisy environment like a crowded street, or a busy public space. As we are rarely in an environment without any sound, so when there is some external sound that is not enough to reach a level of annoyance, the led matrix will show the green state.

Wearables are sort of electronic devices that can be worn as accessories. They could be embedded in clothing, implanted in the user’s body, and tightly attached to the physical body like the sports watch that be worn on the wrist and will not affect the movement of the human body. Wearable technology should be basically placed in the area that will not disturb people’s movement, so in this project, I chose the apron as a basic wearable framework and embedded the sensor and device inside. In the process of testing, I firstly chose a hoody as a frame, but it turned out that the apron was more wearable which can be taken off or put on rapidly. Although the current apron needs to support by a laptop( the battery container is still being shipped)and the wire connections also need to totally replaced by the conductive sewing thread, but from the perspective of the overall operation, it is highly wearable. Additionally, according to the Body Map- Body Locations for Wearable Technology, it shows the upper whole body(the dark green area in the body map) is a better area to place the device, so I placed the LED Matrix around this area. 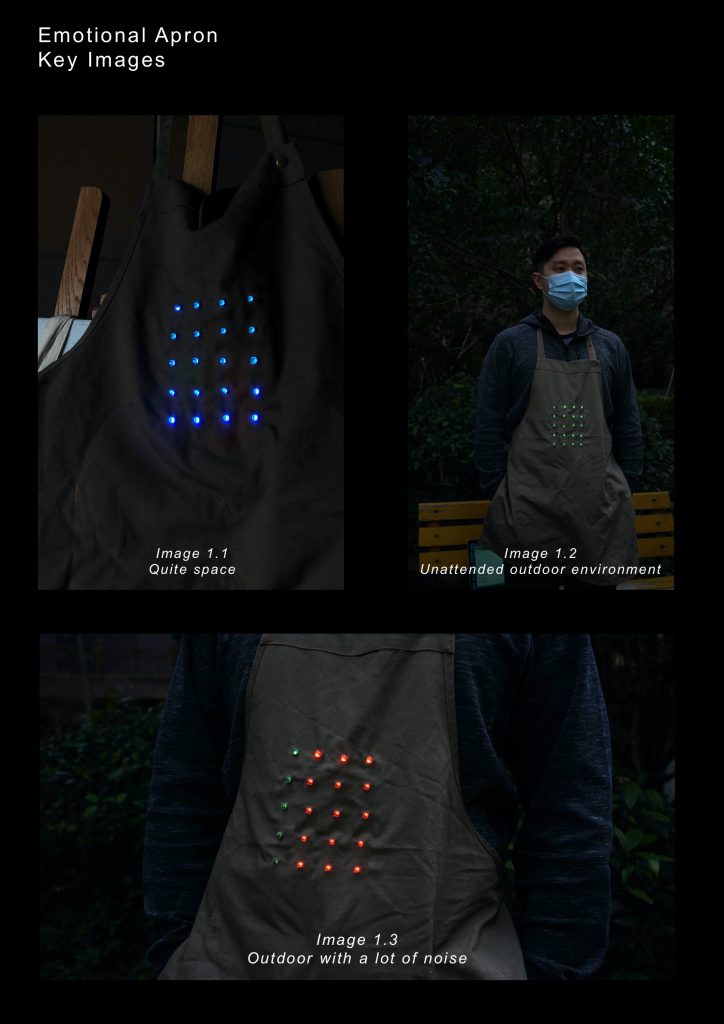 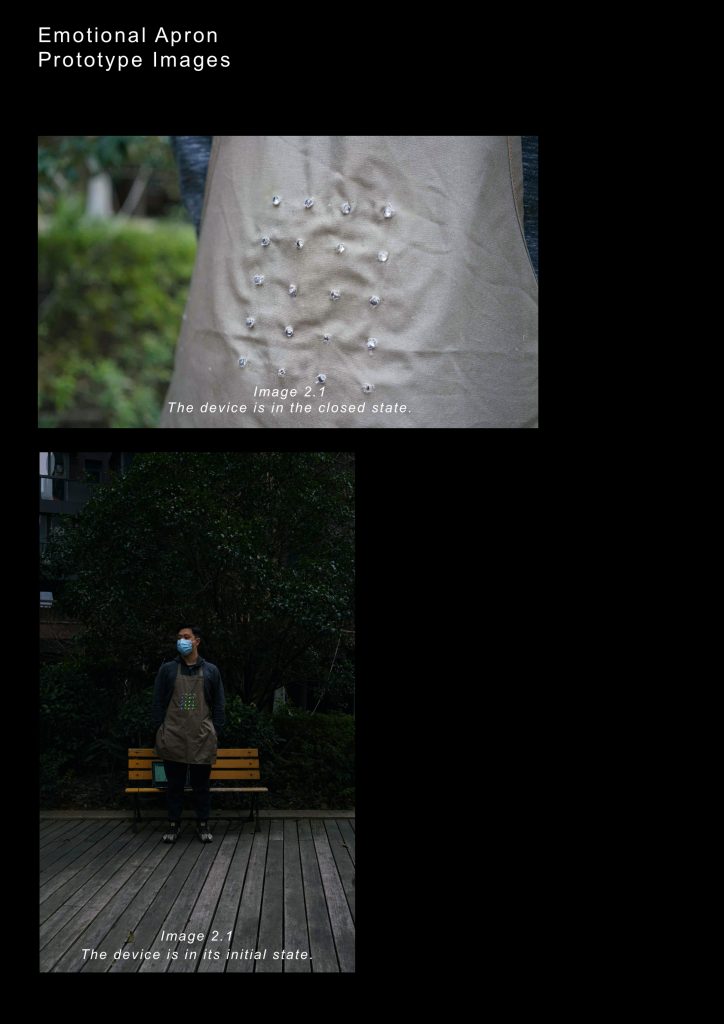 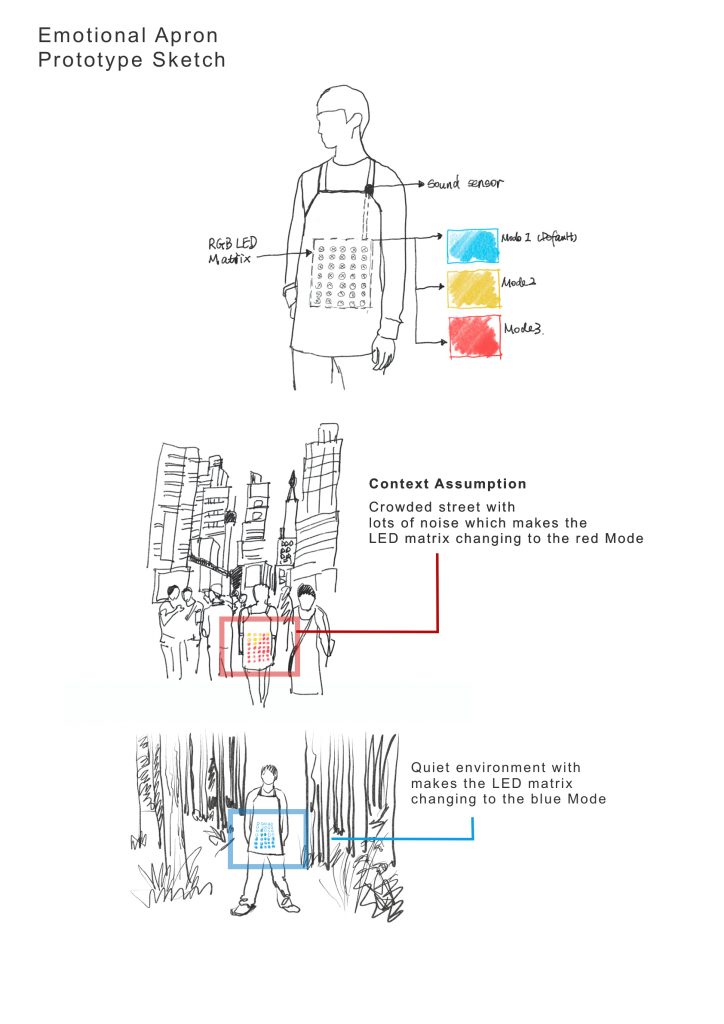 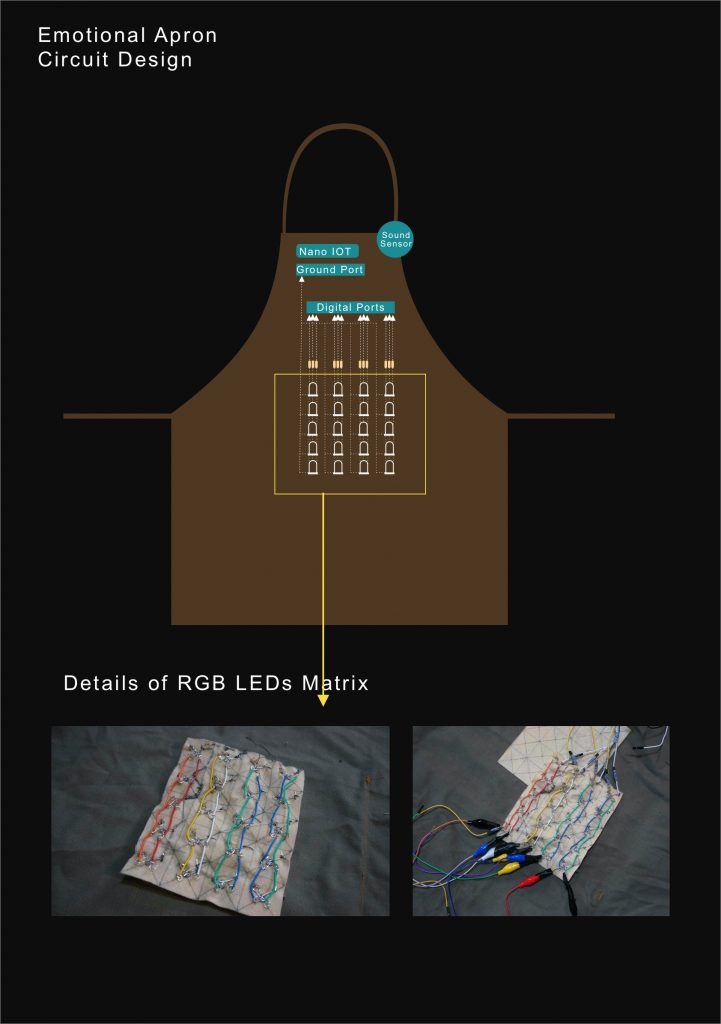 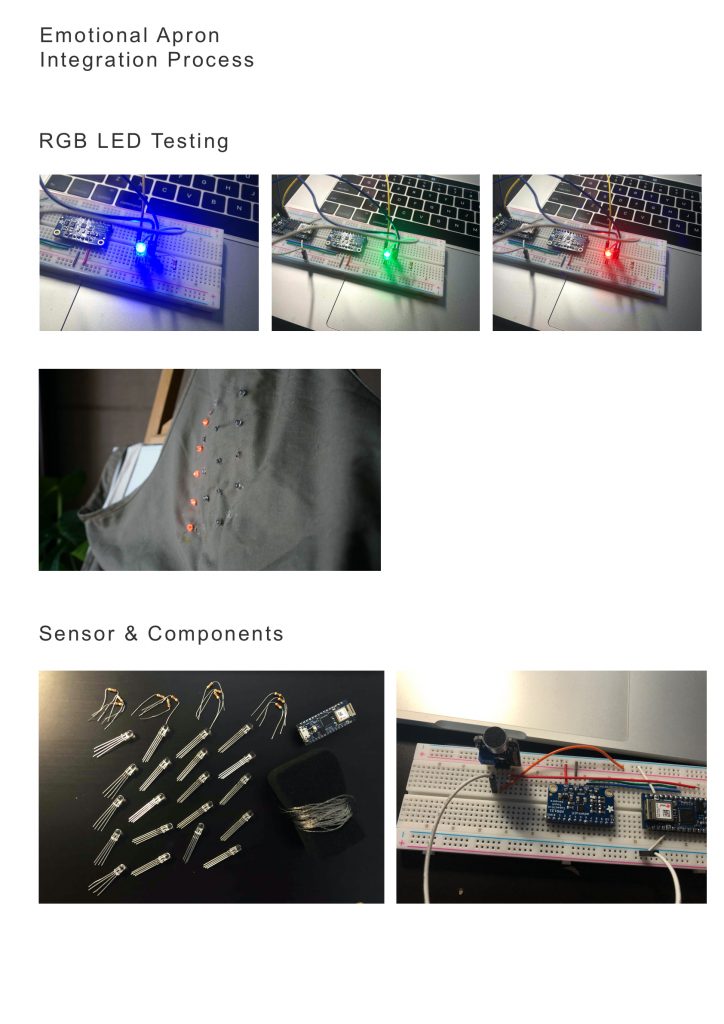 When doing the research, I found three wearable light projects that I want to share. The first one is called Turn Signal Biking Jacket, which is a useful wearable light application. The device is attached to the back of a jacket. People can wear it when doing some sports, especially when riding a bicycle. The controllers are embedded on the cuff, which is easy to click and other people will see the signal directly. Besides, this project is realized by Lily Pad with its related components, so technically the jacket could be washable without the battery. So I think this project is really practical and useful for many activities.  More making details could be found from  https://www.instructables.com/turn-signal-biking-jacket/ 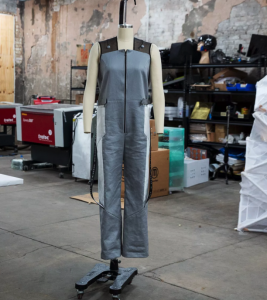 The second project is a wearable prototype called Ceres(image above), it is designed by the studio called wearable media, a fashion tech studio based in New York City. There is an embedded microcontroller in Ceres programmed to work with NASA’s Asteroid Neo-Ws RESTful API, which collects and catalogs real-time data sets of near-Earth asteroids surrounding our orbit. So the suits will vibrate timely. This project is really beautiful, as it is not just a fashion design, but also a wearable design. The material of the suit is also soft and light, but at the same time, it will also help the user to be aware of the vibration. This project is also a combination of technology and aesthetics.

The last one is a little bit terrible called Bling Bra, even this project is mainly to make fun, but it is indeed a negative example of a wearable light project. Firstly, the way of attachment is too simple, which is only to install on the surface of the bra. The bra is a sort of private suit, which requires some biometric consideration when embedding the devices. So this project is incomplete as I could not find any meaning from the aesthetically and practically.

1.’Where to Wear it: Functional, Technical, and Social Considerations in On-Body Location for Wearable Technology 20 Years of Designing for Wearability,’ Clint Zeagler

2. ‘What is Wearable Technology, How it Works?’ Kela Casery, ’https://codersera.com/blog/what-is-wearable-technology-how-it-works/’ 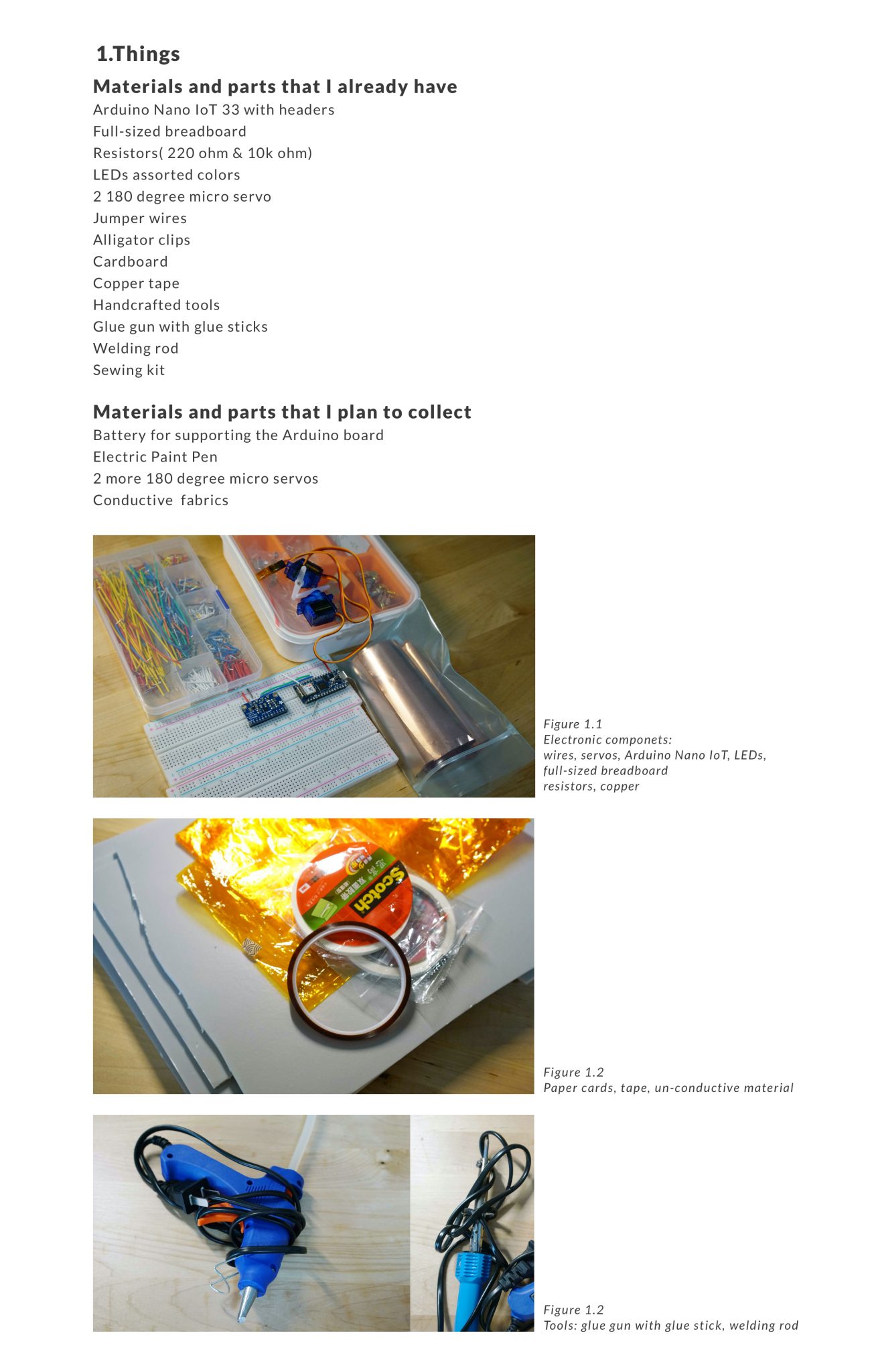 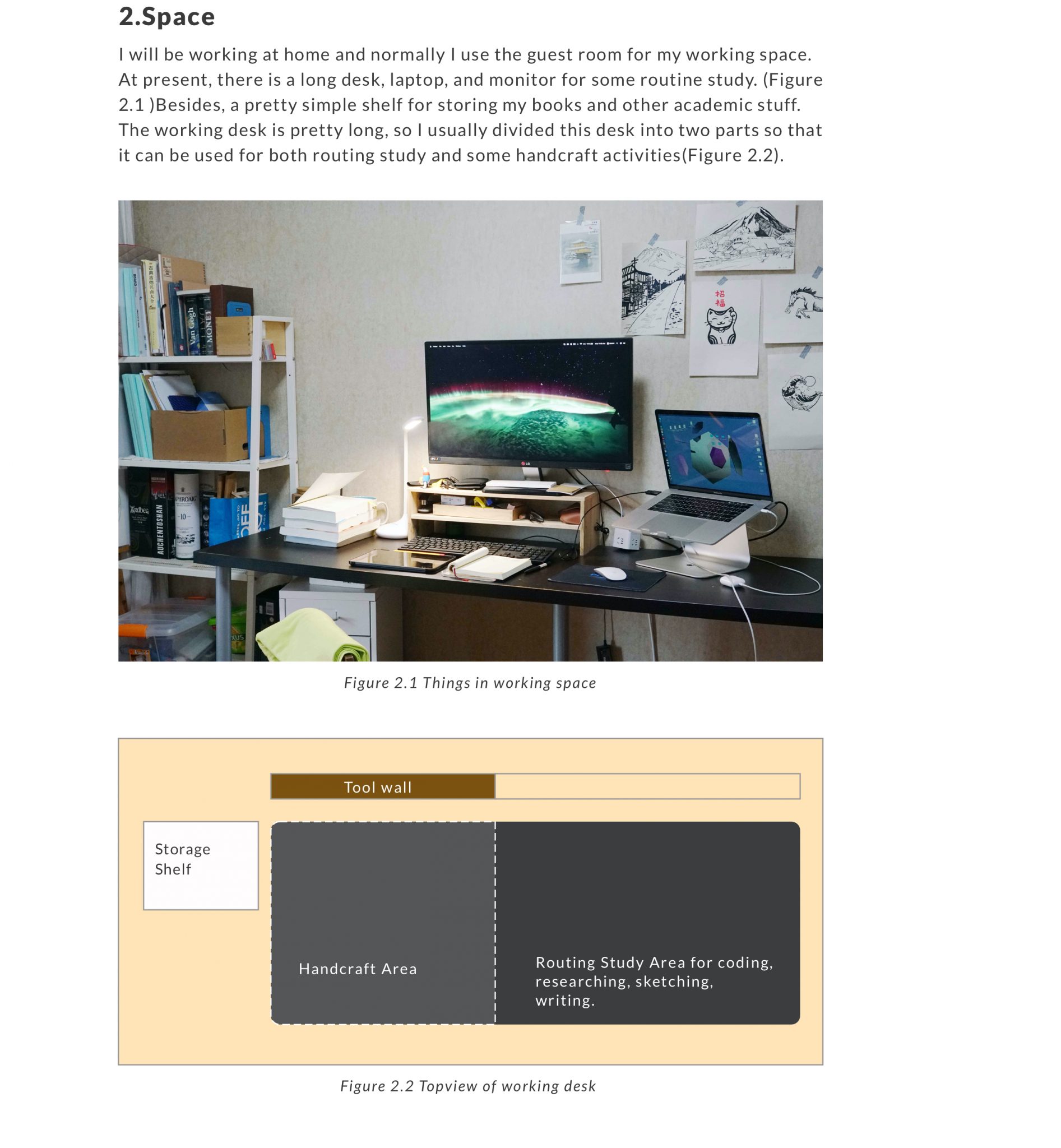 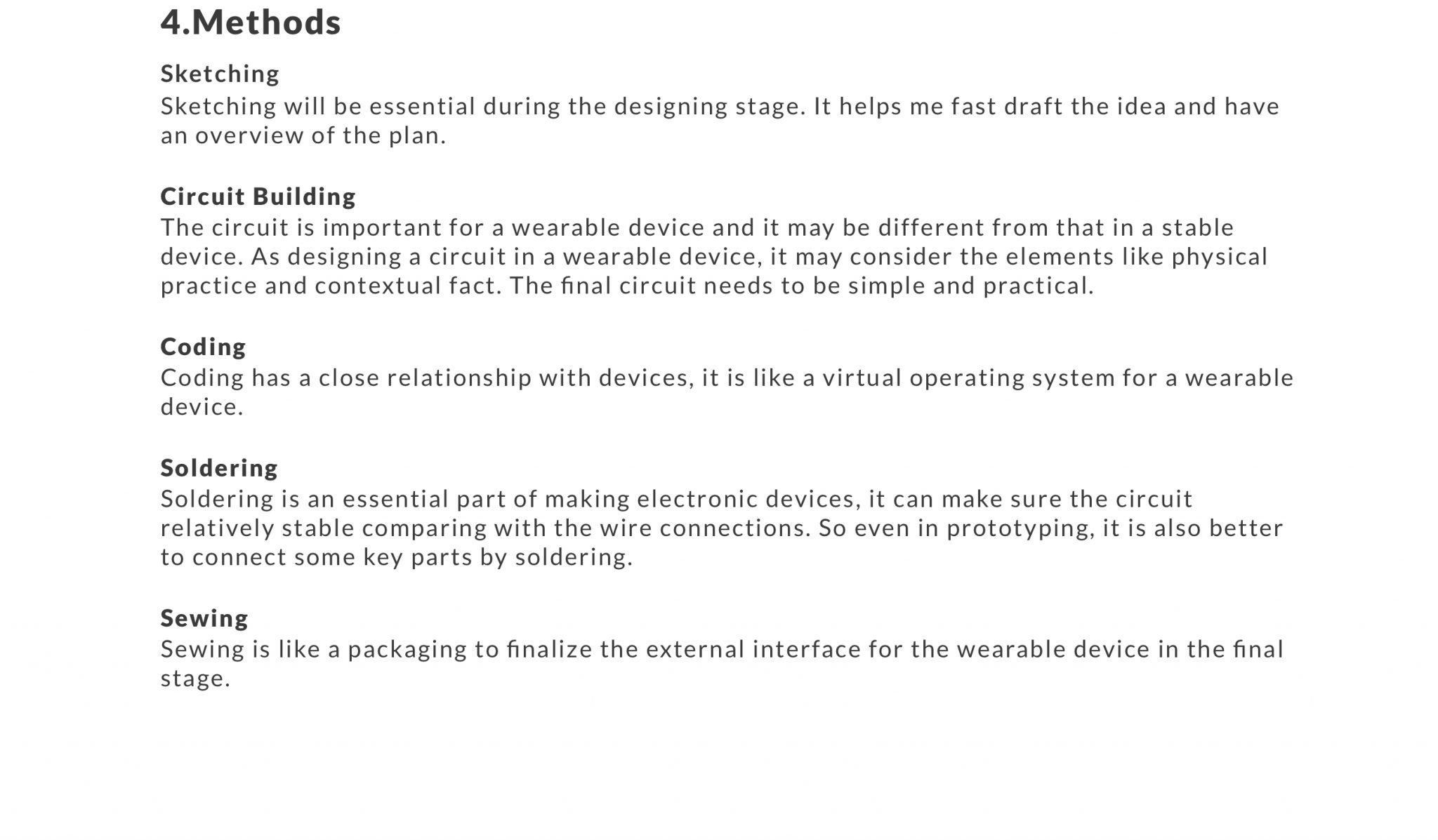