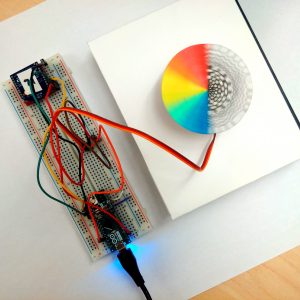 This little device is a simple desk companion that acts as a visual silent alarm for the hearing impaired. In theory it would react to a doorbell and spin indicating that someone was at the door or that mail had been left. Alternatively, it also acts as a distracting toy that reacts to notifications.

During the chat exercise, my partner and I didn’t have much trouble configuring our XBees and were soon able to send messages back and forth. However we didn’t really do much chatting as we noticed that we weren’t able to send long messages because packets would get dropped. One of us would send “Hello” and the other would receive “Hell”. It was interesting to see how this led to funny miscommunications. This led me to the conclusion that the XBee wasn’t really a communication device in the traditional sense of the word. I would have to think of communication beyond words. We found that the most effective way was to send characters.

Tip: Use the edge of the breakoutboard not the XBee to determine where to put the power, TX, and RX pins for the XBee connection.

While testing the XBee using the Arduino Physical Pixel example, I was able to control an LED bulb using the serial monitor, however when trying to control the Arduino x XBee setup using another XBee we ran into some issues. We were able to only achieve one way communication. My LED would light up or go off when receiving signals from my partner’s XBee but I was not able to light their LED using my radio. This was also happening with another group.

For my device’s design choice, I was thinking of the instructions we got in class; to think of an interaction that would be around 20 or more others. Initially, I had wanted to use sound as an output however I figured something more visual would be a better choice as it would still be able to be noticed when around other devices that were reacting to the metronome. Since I removed sound from the equation, and began to focus mainly on visuals, this made me think of the hearing impaired and I thought “What if you could have a tiny visual desk alarm that spins when someone rings your doorbell?”. I also wanted to learn how to work with a servo as I had never used one before.

When conceptualizing my design I had envisioned having a rotating cylinder or disk inspired by spinning tops and wheels, however, I realized that the micro-servo can only make 180 degree rotations not 360 degree as I had imagined. I didn’t have the knowledge to hack my servo or the time to get another one so I improvised the rotations to still create an optical illusion effect. Below are some images from my prototyping.

I would like to continue to explore making desktop companions thinking along the themes of accessibility and self-care toys. I’d also like to work with more servos.