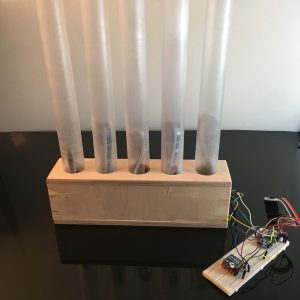 Colour Radio is a communications project encompassing analog signals conceptualizing an interaction through sensors and analog radio communication. This project incorporates an interactive transition through the colours in your surroundings with a colour sensor. With Neo Pixel LED lights we have created a visual output that acts as an abstract representation of environments. Our intention was to create a beautiful visual that represents analog communication through Xbee components.

Phase 1 of brainstorming incorporated the knudgeables we explored the idea of creating a wearable that surrounded an interaction based on being able to express your state of mental health.

Phase 2 was discussing other forms of communication with the Xbee radios. At this phase of discovery, we decided that we wanted to delve further into an aspect of networking. We wanted to learn how to handshake between the Xbees and formed our project around the mode of learning we wanted to explore. 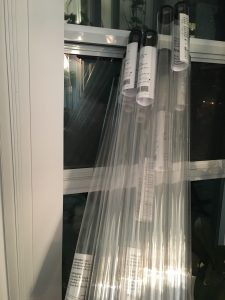 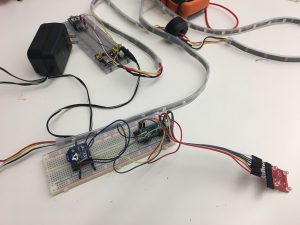 Phase 3 Throughout this stage we discovered that we wanted to make a representation of radio communication.
We discussed analog technology and the older forms of electrical components like the old vacuum tubes in televisions. While contemplating the circuit and its components we decided to use a sensor that could grasp aspects of surroundings without obvious communication like words, letters or noises. We discussed Infrared sensors and other distance sensors but decided to incorporate a colour sensor into the project and use LEDs as an output of this data. 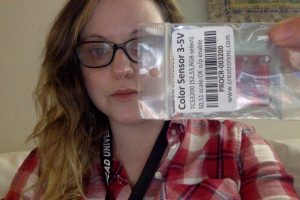 We initiated the projects 1st steps by calibrating the light sensor. This was fun for the group because it was our first time working with colour sensors. The light sensor works by shining a white light at an object and then recording the reflected colour. It can also record the intensity of the reflection. Through red, green and blue colour filters the photodiode converts the amount of light to current. The converter then converts the current to voltage which our arduino can read. We weren’t able to get good absolute RGB readings from the sensor What we have been able to get is what I would call relative RGB, as the colour it is sensing is clearly visible by one value spiking, but it’s not within the 0-255 range. So a red object might cause the red value to rise by 30, not by 255. This is clearly visible when connecting an RGB LED, it will change colour, but the colour change might not be visible, an issue is also that generally blue LEDs have a higher energy output so it might overpower.

With further exploration into the networking of Xbees with sensors and the variations of input and output while exploring various nodes we originally had some issues transferring through the RGB values.  We would get some data readings to communicate as an output through the Xbees but would continually stop working. 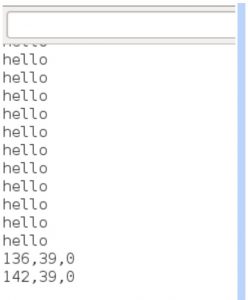 Our goal was to establish a call/response handshake between two Xbee radios, however we had many issues executing this. We set up a transmitting XBee ( A ) connected to an Arduino that would send RGB values and a receiving XBee (B) that would get those values and use them to light a NeoPixel LED strip. We kept getting strange values in the buffer on the receiving end and data would sometimes be sent and sometimes not. We weren’t able to get it working however were able to get the handshake to work when the receiving XBee (B) was  connected to a laptop directly without an Arduino, with this setup we were able to initiate the handshake call/response action whereby the XBee(A) would send “hello” until we sent a character over the serial monitor and it would respond with the RGB reading from the color sensor. The image below shows a screenshot of this (The values returned are shown twice as we were printing out Serial and Serial1 values).

In the end we modified our code so that XBee (A) transmitting color sensor values and the NeoPixel strip ran on the same breadboard, so that the strip would change colors according to the colour sensor reading. The receiving XBee (B) was connected to Processing and the values received were used to change the background of a sketch, we envisioned this as an additional representation of the color sensor’s readings.

For future iteration, we would create a mesh network with colour sensors and more intricate variances in the colour changes of the led’s. Like initiating different patterns perhaps a blending of colours depending what the light sensor picks up. Exploring communication with the Xbees further and advancing on the foundation of this project we would like to add colour temperature sesnors in accordance with basic colour sensors in the future.