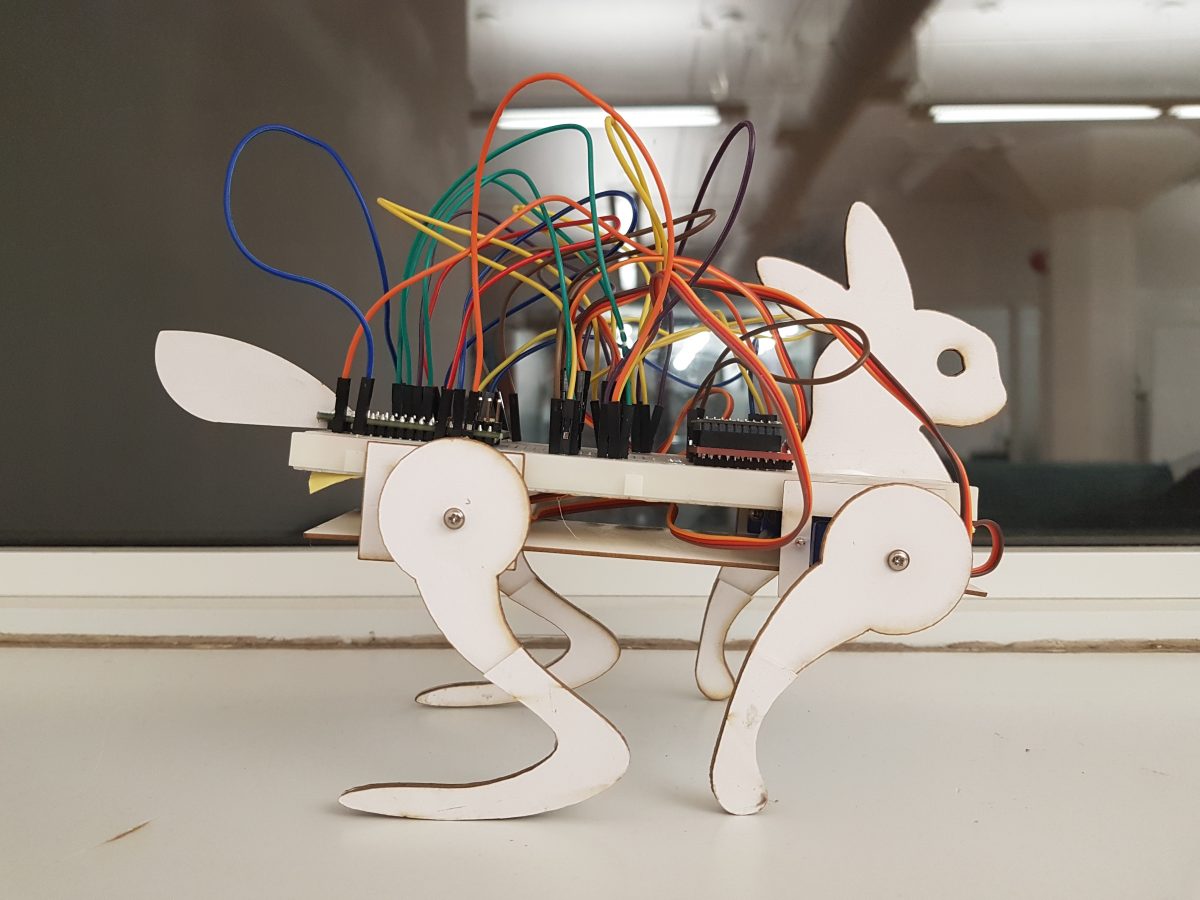 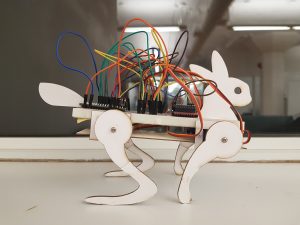 We were introduced to the XBEE radio transceivers. My radio kit came with a Lilypad Arduino which conveniently could be used to configure the radios. I tested the device out with another student and we sent several strings back and forth between eachother.

Reminds me of the command terminal on computers / past arduino serial communication experiments. The XBEEs were relatively easy to setup with the aid of the lecture slides provided by our professors and the necessary firmare. Transmissions have been clean so far, but will have to watch out for dropped packets when testing in the future.

Since the XBEEs don’t natively fit on breadboards, I soldered the breakout board provided to us after class.

The important things to note:
– 3.3v power supply
– RX / TX pairing between the arduino micro and xbee on setup
– serial can be used to communicate with the XBEE for testing purposes, but ‘Serial1’ must be used in the Arduino code to denote communication with the 1 and 2 pins.

For the sake of our task to create a device to interact with a metronome signal I was inspired to use several servos I had leftover from last semester to create some sort of rabbit. I wanted the project to be relatively simple but demonstrate motion and have an entertaining appearance. I first tested out the servos with both a 9V power supply and a USB power supply. Supplying the four small devices that would be the legs worked as expected and operated fine with some demo code provided through Arduino’s IDE (Servo Sweep and Physical Pixel), although I discovered yesterday that the charge remaining in my battery supply seemed to have diminished overnight and lost its efficiency. The weight of the device on the breadboard began to concern me as I thought about how the device would be supported if it were to be an enclosed object.

When it came time to design lasercut parts for the device, I created two types of legs to test (forelegs and back legs), with multiple copies cut to allow them to be laminated for thickness. The servos were mounted beneath the device’s breadboard with Weldbond and a second panel and oriented as appropriate for the four-legged mammal. The legs were mounted to the servos with the kit attachments, some glue and screws; without the screws, the legs were unable to support the weight of the device. 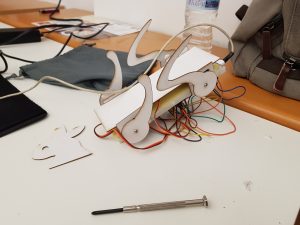 The code has been designed to operate in two different states: a wide stance for a “High” signal and a narrow stance for a “Low” signal, in similar appearance to the visual look of a sprinting rabbit. The orientation of the servos required, for example, that the left back leg was positioned to a different angle than that of the right back leg in order to appear symmetrical. For my code, this meant that the angles for the respective servos were at opposite ends of a range between 0 and 180. Naturally, having the legs span the whole range of the servos looked peculiar and caused some technical hiccups with the leg behavior, so it was reduced to an appropriate span.

The back legs seem to perform more effectively than the forelegs, which often get caught in awkward angles causing disruptive behavior. This may also be due to my selection of servos for the forelegs, which are of a different, cheaper make than the hind ones supplied by last year’s Creation and Computation class kits. 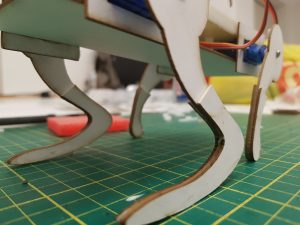 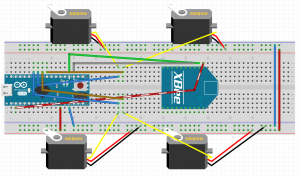 Along with several other classmates I tested out my device’s functionality with the radio signals of other XBEEs. It took a bit of troubleshooting to detect but it turns out the device works fine, if a bit finicky sometimes with receiving the data packets. This could be due to the amperage draw of the servos competing with the XBEE; given some of my past experiences with servos I’m fairly surprised how well the circuit has been working up to this point.

I did end up getting a replacement battery, which worked just once with the remote signal but afterwards lacked the capacity to support the circuit. Perhaps I will look into using 12V instead of 9V in the future.