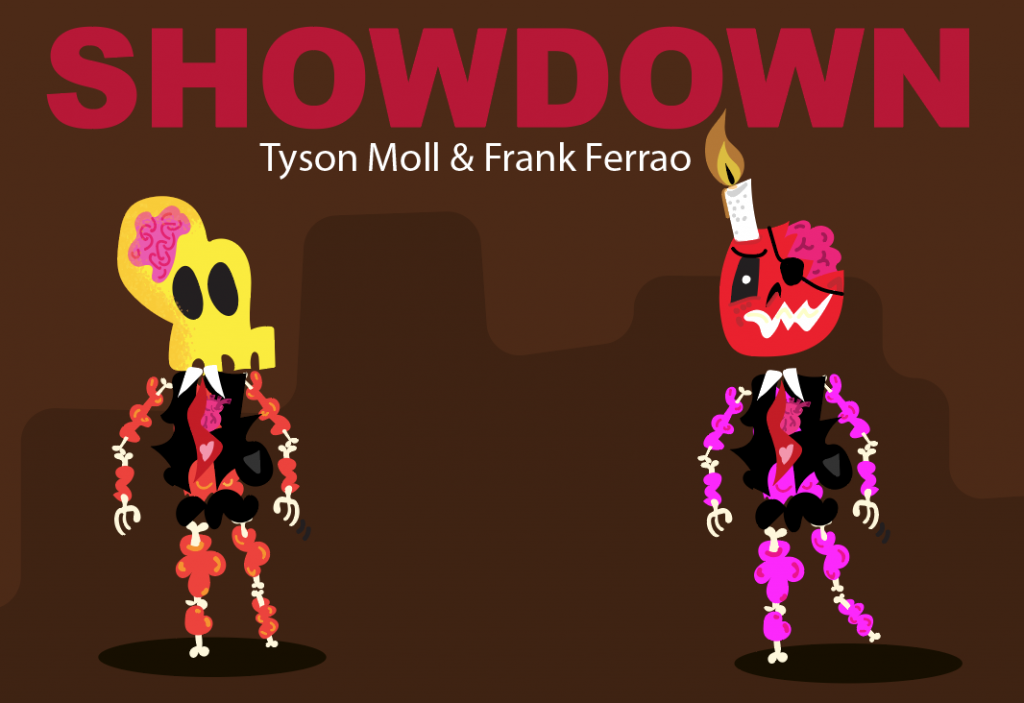 The game Showdown!! is a twist on the classic western movies showdown (gunfight). The idea was to use the Nudgeable’s as game controllers, with the vibration as a tactile indicator of being shot or injured. It is a very short game, around 2-3mins and allows for 2 players to duel out to see who is the fastest gun in the west.

We used p5 to display the animations and interaction on screen. It has two components: the p5 serial controller for the serial port connection with the Arduino ‘Listener’ and the p5 code in the web browser which makes the interaction visible. The purpose of the p5 display is to track when a ‘gunshot’ is fired in order to provide to participants an accurate gauge of who shot first, as well as a scoring mechanism. We reused characters from one of Frank’s previous projects and imagined that, as players scored points, the characters might lose limbs or otherwise act out.

Development was halted when we discovered technical problems with the listener device, but we made a proof-of-concept version to demonstrate how it would have worked. 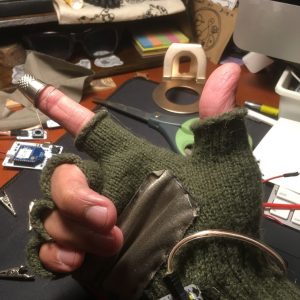 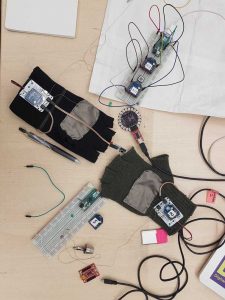 The hardware provided was Nudgeables, a custom device created by Kate Hartman for the body-centric design experiments. Our intended circuit featured two xBees listening in on the Nudgeable devices; when either Nudgeable device is activated, the listening device would send a signal to the microcontroller and our p5 interface. Due to technical challenges, we were unable to realize this with the Nudgeable devices.. perhaps using a microcontroller for the job would have been more intuitive.
We sourced two pairs of mitts from a dollar store and affixed the nudgeables to the garments with conductive thread. In order to activate the device, we designed a ‘switch’ that would activate whenever a thimble came into contact with the palm of the glove, which had a layer of conductive fabric. The activation of the device was very intuitive and effective.

The Listener (+ Challenges with the Nudgeables Hardware) 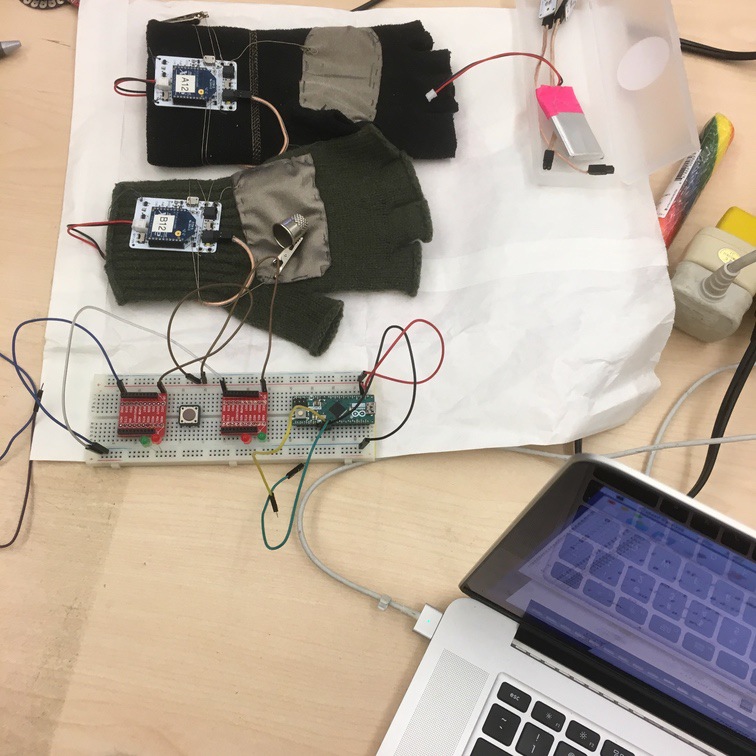 In order to create this project, we had to determine exactly how the Nudgeable xBees were communicating with each other. The Nudgeables user manual doesn’t explicitly define what the configuration settings are for the devices, but we determined that it was likely that the boards were using wireless communication to activate paired pins between the device’s modes A and B. We used serial communication with the Nudgeable xBees to collect their channel, identity, target and digital pin pairings in order to create ‘listeners’ for our projected interface that could eavesdrop in their communication and trigger events for our microcontroller and software. Based on our testing we determined that the ATD0 and ATD1 values for the Nudgeable xBees were paired with each other and that they communicated on channel 12.

With this in mind, we manually copied the configuration information we collected from the Nudgeable xBees and applied them to our own xBees in an attempt to create ‘clones’ that would listen in on the conversation of the originals. We tried to detect when the digital pins were activated on a breadboard by using LEDs, then serial from an Arduino Micro. The results were indeterminate, and when we later tried plugging in our clones into the Nudgeable devices they didn’t behave appropriately. In essence, something was still different between our clones and the original xBees.

We discovered that a software known as XTCU has a means of properly cloning the configuration of one xBee to another and decided to give that a go. Testing them out on the Nudgeable devices we created worked, although we were still unable to use these cloned xBees for our listening device. 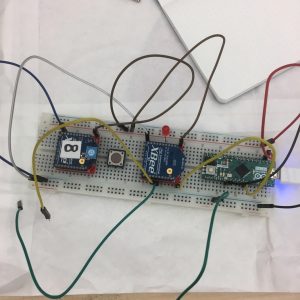 The Nudgeables are designed to be very modular and work great as part of the gloves, we were able to get the gloves to act as triggers with conductive fabric and conductive thread. 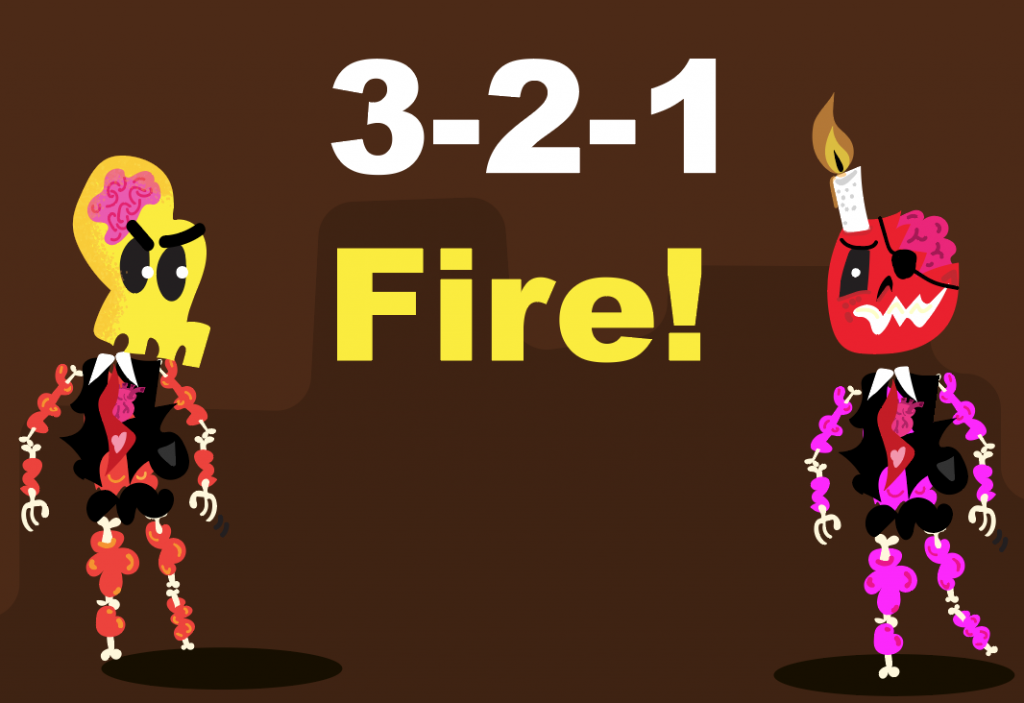 What didn’t work but we would like to have: 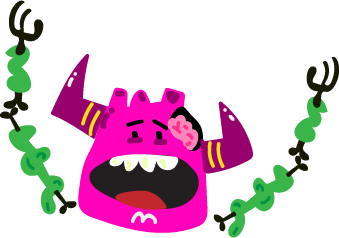