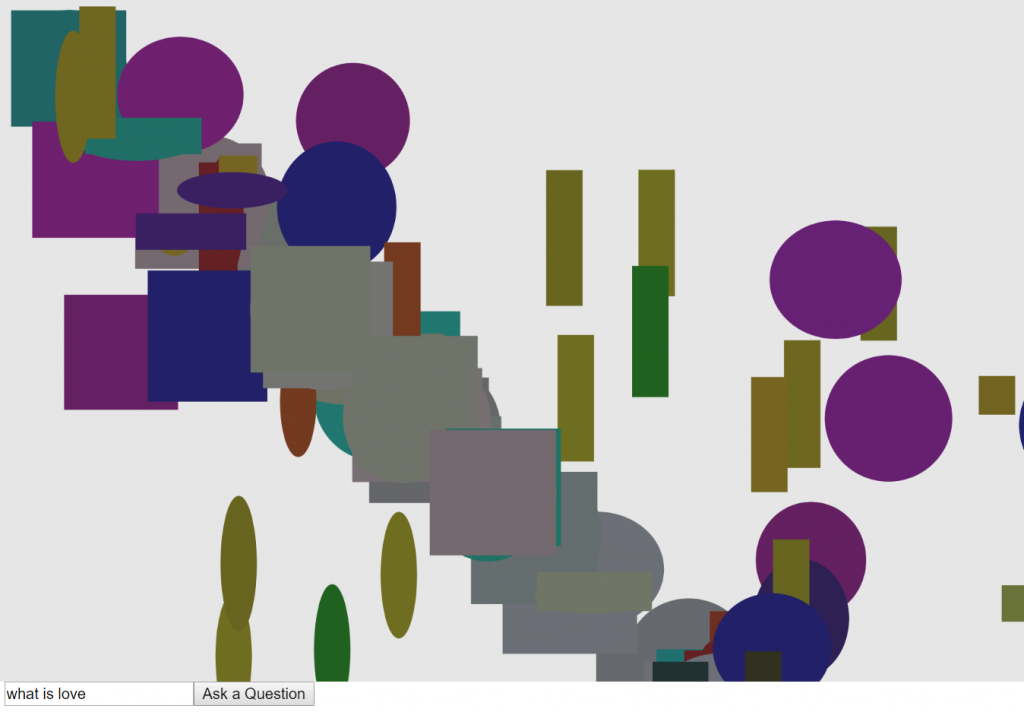 Art is the Answer is an exploration of the way we interpret information. When a question is asked, Wolfram Alpha’s response is displayed as a procedurally generated artistic abstraction. Art is the Answer disrupts the succinct question/answer call/response of Wolfram Alpha’s usual use and asks the user to interpret what the answer to their question might be, and how the shapes displayed affect that interpretation.

I started, as I often do when I encounter new technology, by examining each component and breaking them down into their simplest terms in an attempt to develop a mental model. I took a close look at the demo code and copied it over in to my sketch. Having not worked with PubNub with any depth previously (in the Networking assignment of Creation & Computation I spent most of the time working on physical builds) I knew I didn’t want to get too complicated with regards to APIs – I left PubNub and Wolfram Alpha alone after connecting them. Since we were working with p5, a tool designed originally for making art, I decided that I would break down the response from Wolfram Alpha into data that p5 could use for art’s sake.

I was sure there must be a way to turn letters into numbers – after all, in code, everything is a number eventually. I did a little research into letter/number encoding. The first hit I got was for A1Z26 code, a simple cipher in which A=1 and Z=26. I doubted this would suit. Eventually I remembered ASCII and hexadecimal code, and while I was researching these I came across the function charCodeAt(). This function returns the UTF-16 code at the referenced location. A few tests showed that this would be perfect. It was time to get into arrays and for loops.

I had never worked with arrays with any depth before, nor for loops outside of simple limited mathematical situations. I knew that in order to get this to work I would have to store every letter of Wolfram Alpha’s response in an array, and run that array as a for loop so the variables could be used to draw shapes. 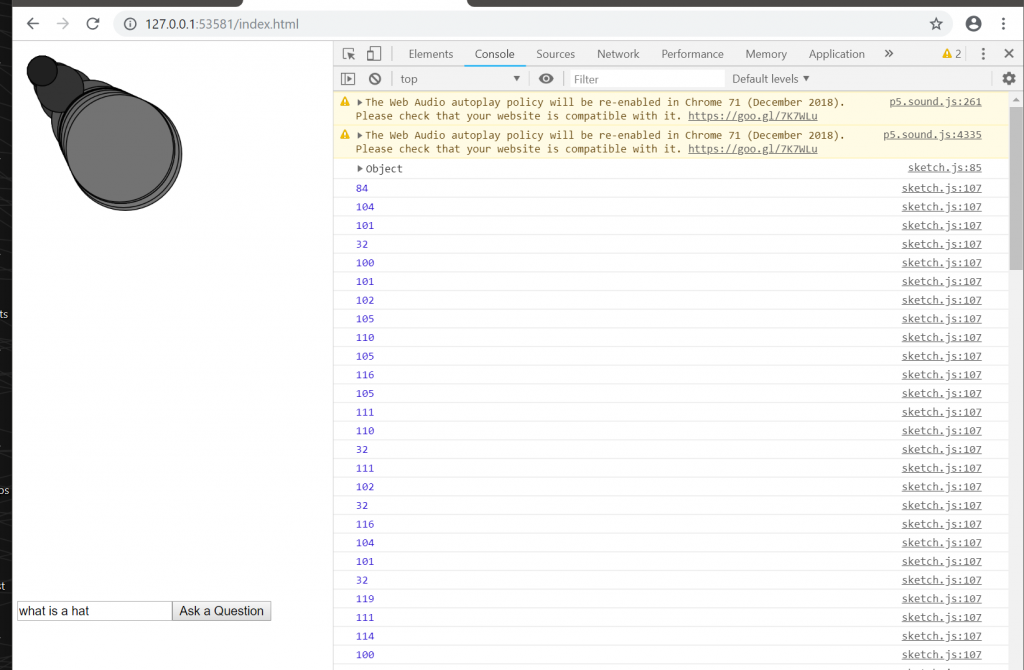 Above is my first successful attempt at translating Wolfram Alpha’s response letters into shapes on a p5 canvas.  Printed in the console is the UTF-16 value of each letter. Those values are entered into an array which in turn is called during every calling of a for loop, and the values are entered as the fill, size, and coordinates of the shapes.

The problem was that since every value was identical within each loop, I always got a print out of a series of greyscale shapes along a diagonal. 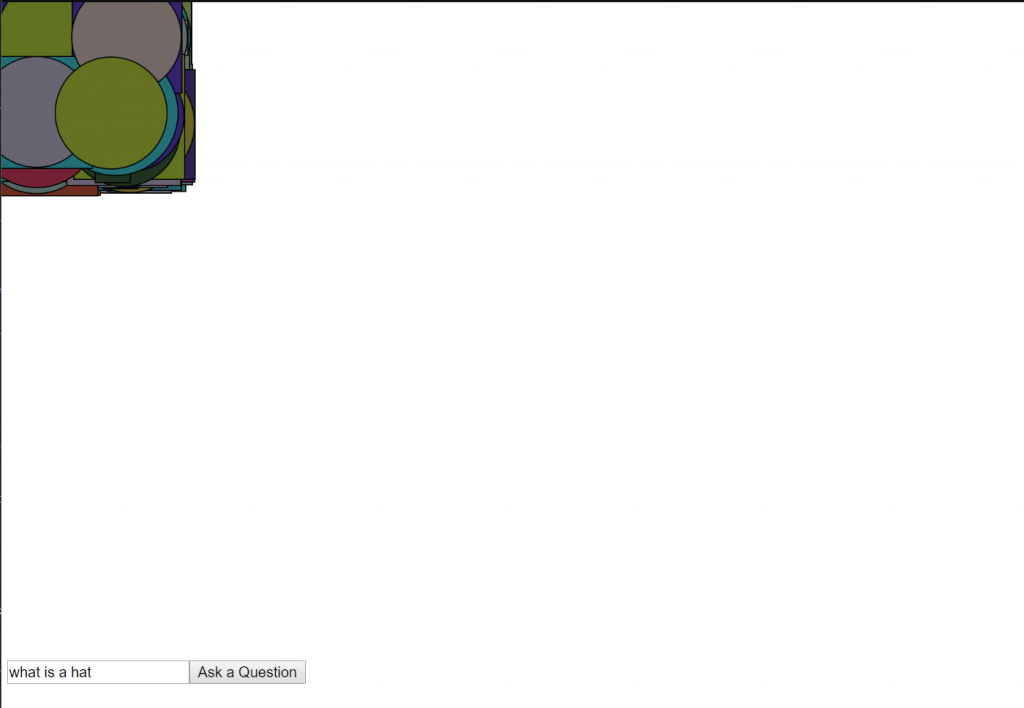 So now we had a variance in shape size and colour, but the numbers being returned from Wolfram Alpha were too small to make a pleasant scatter effect on the canvas – the x and y coordinates were all under 200 on a canvas that was 900 units wide. I decided a few random numbers in the mix to serve as multipliers would be useful to get that effect.

I played around with including the random number generator from Wolfram Alpha as well, but that proved to be a little too complicated to work in to the existing for loop. It also proved unnecessary: the random() function included in p5 was sufficient. 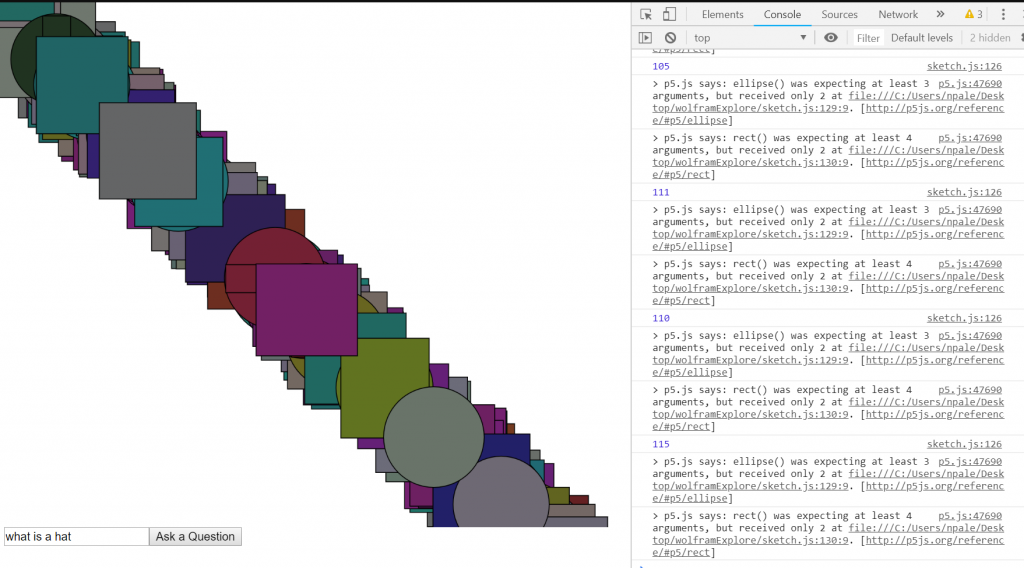 One random numbers were included as multipliers to the numbers returned from Wolfram Alpha, I had the kind of results you see above. Rather than scattering them around the canvas, they distributed them fairly evenly.

This project is mechanically similar to my mindPainter project, and it would be interesting to combine them in some way.

I would like to polish the art that this produces so the shapes it paints are not consistently primitives like rectangles and squares.

I would like to add a mechanism wherein a user can click or press a key to see the answer to their question in text – although, this might undermine what is in my opinion the strongest aspect of the piece: that the user has no way to getting to their answer without interpreting the artwork.