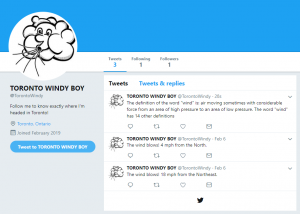 What?
I hooked up a Twitter account with p5 and the Weather Underground. It tweets whenever the wind picks up speed, or whenever I have something spicy to say on the account. Whoop de doo!

How?
Thanks to a handy-dandy example provided by Nick Puckett, our presiding Ubiq prof, we were able to connect p5 / javascript to io.adafruit.com, which in turn can be accessed by a website called IFTTT (IF-This-Then-That) to perform actions with whatever value you provide it through the p5 environment. IFTTT works in terms of ‘applets’, which perform the “do this whenever that happens” you dictate them to. It supports a variety of services; I used the Twitter, WeatherUnderground and Adafruit functionality.

IO.adafruit.com accomplishes this by capturing data sent to its API, then sharing the information with any integrated services observing the channel the data was sent to. The p5 environment simply has to collect information, then pass it on to IO.adafruit.com.

The first applet allows you to post a Wolfram Alpha response to Twitter using a p5 interface. I crudely merged last week’s example code on retrieving Wolfram Alpha API messages through PubNub with this week’s example code on sending information to io.adafruit.com in order to have the applet post some fun facts about wind on the Twitter account. Essentially, whenever the Wolfram API sends back information to the p5 interface, it triggers the io.adafruit.com function and sends the string to be forwarded to the Twitter account.

The second applet just takes wind data from WeatherUnderground whenever it passes certain thresholds (in KPH) and posts a tweet about it on Twitter. By following the IFTTT’s site’s step-by-step instructions I quickly got the applet running.

Why?
I never really payed any attention to the wind direction reports from weather providers but it seemed cool in concept to be alerted whenever it gets real windy in Toronto. So why not? Having it available as a separate service makes it more noticeable to me instead of the information being bogged up with the weather details everyone else wants to know about (e.g. temperature).

It’s likely that the IFTTT service can be circumvented altogether with a solid understanding of each of it’s services APIs, as I would presume many of them are publicly available, but the process of setting this connection up was considerably quick and simple.

The concept of having this access to API’s hosted on the web also interests me in the idea of public engagement of data and its distribution and uses. Maybe the p5 context could be a corporate sharing site for employee photos, maybe it’s a handy way to centralize all your social media sharing activity.