This exercise was fairly simple, thankfully, as I didn’t have too much time for it what with the thesis deadline on Friday.

The hardest part was coming up with a reason for the data to come from a webpage at all. Often when I think about adafruitIO, it’s in relation to hardware, gather passive sensor input, and my first instinct was to do something with this. However, I saw the applet on IFTT which allowed you save records into a google sheet, and this intrigued me. I came up with the idea of recording data into a leader board for a game.

This was trivial to set up. I didn’t want to reinvent the wheel, so I simply used p5’s snake game tutorial. Everything stayed relatively the same, except that I changed the controls to work with WASD instead of IJKL, and added a congratulatory message for high scores.

By the way, this felt redundant AF because IFTT will check for the score’s validity too. This could be salvaged if IFTT let you compare values to other values, instead of forcing you to hard code them, but whatever. Once the game ends, it sends the score to adafruiIO, which in turn, sends its data to IFTT. I have two applets recording data there.

The first is that google drive applet I mentioned earlier. This one is a bit slow to start up, so I got the second one to test with faster. The conditions are the same for them both, though. When a player reaches the “high score” of 10, then save the data to the drive, send me a notif. 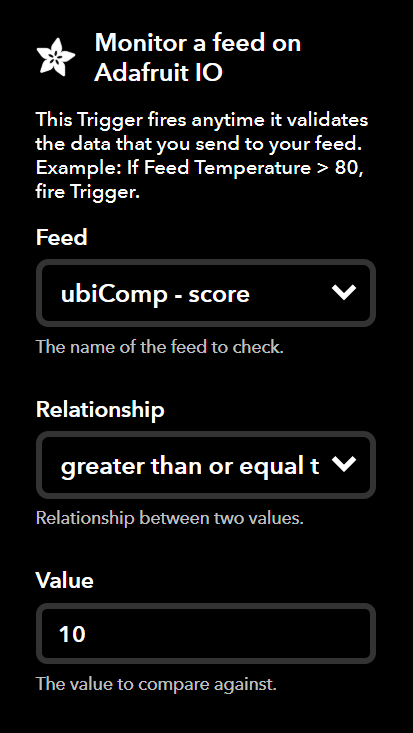 Now that I have this data, it would make sense to add a leaderboard to the game page itself. I started looking into this, but the google API for fetching data from sheets is… A Lot. Will take more time/effort than I have to spare this. It makes sense tho. That could be sensitive data, and there’s a lot of layers of authentication going on. Anyways, this would involve getting pubnub set up to take the API, and modify the p5 code to make a call to pubnub to make a call to google’s sheets api and retrieve the scores sheet. Then, once the sheet’s data is received, it would be to sort from highest to lowest, and display it on the game upon game completion.