The main idea is if you’re running late, shake your device to send a message to your colleagues on Slack! instead of typing it out as you’re running or bustling through your commute. But why Shake? I had hoped to convey this frantic state of being late expressed through shaking your mobile device, instead of having ourselves focus on the screen to type to notify as you’re walking or driving. I equated this experience to rushing/running to class, with your device either in your hand or in your pocket, shaking as you hastily move. Because with all that effort to make sure you’re not too late to class, why not let it produce a useful result? 🙂

My goal with this experiment is to see if there can be a more dynamic experience to IFTTT than just simply pressing a button or sending a string through using p5.js. I realized if I had opened my scope to using the Adafruit feather, there would have been other possibilities, but I narrowed it down to what can be used on our mobile device, as it is always available to us. Of course, the webpage would need to be displayed first for it to work. 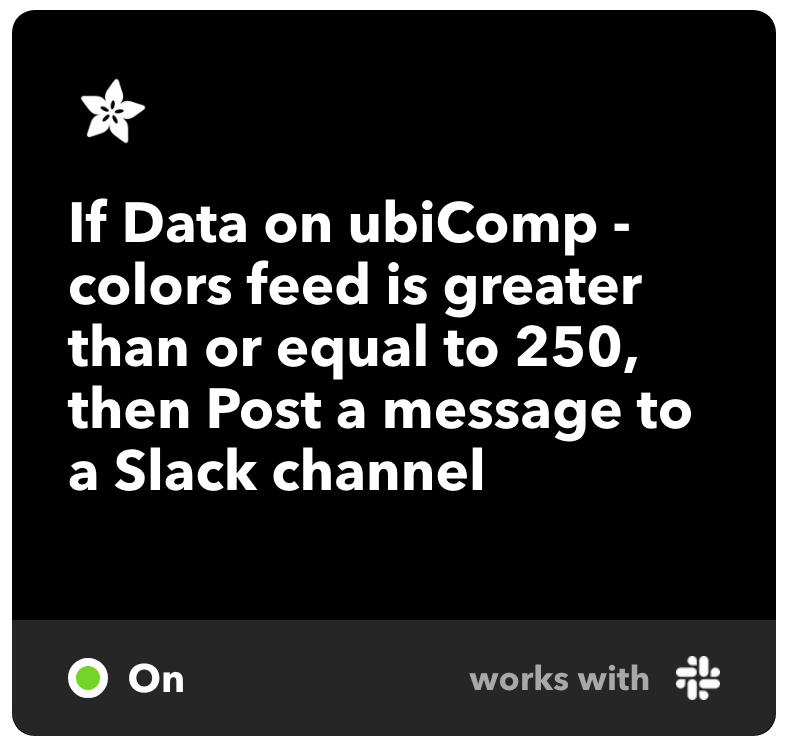 This applet is used to send a message to a Slack channel or a direct message to anyone on your Slack workspace through monitoring on the Adafruit IO feed. Once it reaches a certain threshold, it would send the data through IFTTT and before the user decides to turn it on, it can be customized to their own message beforehand on the applet itself. This can be used to post messages on the user’s Slack workspace, depending on the situation.

I was mostly inspired by the “Shake It” feature from the LINE Chat Application. It is a popular app to use in East/Southeast Asia as opposed to Whatsapp or iMessage. I also thought about how shaking the device has only been limited for use in “sharing” or spreading contacts, and has not been used in other contexts.

I began by identifying what type of input I want to implement as a trigger to sendData(). I looked at keyPressed by perhaps creating a specific key combination for a shortcut that would send data somewhere as a notification and I also considered touchMoved for mobile devices. After looking at the examples for deviceShaken, I realized that I can really explore this for the experiment and see how it can effectively be used for an applet.

I could have easily used a previous channel made from the example in class (the xPos or yPos, or even the message channel) but I wanted to test if merely shaking the device will create a new channel on the Adafruit IO feed itself. When that did not work, I had to initialize a new channel by creating a button on desktop, and once that was clicked, a new channel appeared by the name “colors”, since when the device is shaken, the background colors would change. Once this was done, I was able to see the values on the channel feed, confirming that the deviceShaken trigger was successful.

The next thing I had to decide on was the “then that” part, where I searched for different search terms, such as “recommend a song” “recommend random” “tweet random” etc. My initial idea involved shaking the device and it would send me a text message or an email with a song recommendation from Spotify, but it was not an available action when connected onto the Spotify service. I had to recommend the action, and hopefully it can be realized in the future to expand the potential of IFTTT!

I narrowed my concept down to using the Slack service and decided that the shaking mechanism suits the idea best as it “quickly” notifies someone that you are running late. The Slack service also only provides 1 action under the “then that” section.

After finalizing the applet, I tested a few thresholds while monitoring the Adafruit IO feed. The first code had the values increasing by +5 every time the device shakes, which was a rigorous effort on my part to shake and check to make sure I had reached a value of 255. Since I wanted it to be quicker, I tested instances with a threshold of 200 vs 250, and changed the value from +5 every time the device shakes to +10. For this experiment I ended up with +10 with every shake to hasten the process of getting the notification on Slack. I had to test this on email first to see if the shaking mechanism can trigger to sendData, and it proved successful. The example below was triggered when the values reach 200.

When I finally tested on Slack, there was a significant delay before it posted. While the email was rather instantaneous, it took around 1 minute to be able to see if it had posted. In the applet, I had set the message to post as a private message to Slackbot for the testing, and it appeared either after some time or when I “Check” the applet. This was an interesting finding as the applet would work differently for other people and also, could be affected by the amount of people using the same applet on the same Slack workspace… that would be one to test.

After testing frequently on Slack, the shaking ended up becoming instantaneous, which proves that the run time on the Applet fluctuates quite a lot. I also alternated between channel and private message to see if there were any differences, but it proved to be quite consistent.

Another aspect I wanted to explore was the visualization on the p5 webpage itself and thought to implement the example with the bouncing ball on the p5 example page with some slight color tweaks and changes. However, since it required the use of classes, I decided to go with the example from the Creation and Computation github called Color Shake, and mapped the values from the shaking action to the background color.

I believe there is still a lot of potential in creating IFTTT projects once more actions in each services are added. There is still so much that can be done to enhance the way we use our devices and the applications on our phone, and IFTTT is something that could help realize that. It would also be nice to see other ways in which deviceShaken can be implemented in other projects – it’s something that is still rather gimmicky as opposed to contributing to an experience. I can see it be used in perhaps multi-sensory experiences and in games, but perhaps the sensitivity of the shaking itself is something to consider. Overall, its potential might be dependent on the limitations of our handheld devices.