For this project, I wanted to explore fetching data from Adafruit IO to use in a p5.js sketch. While exploring IFTTT I noticed that most of the services in the “that” section were either very restricted in their feature offerings or they were tied to a particular IOT home device. I decided to try receiving data from IFTTT via my Adafruit IO account.

My project displays the word of the day from Wikipedia’s Wiktionary website. The word received is then used displayed on a p5.js sketch, showing its definition and

from this project I learned how to use XMLHttpRequest and parse response data while getting data from Adafruit IO.

I created a new applet using Gmail and Adafruit to collect email sender and email subject headline. When sending the data in the “Add ingredient” tab of the applet creation, I realized that I needed to add delimiters to my data so that I could send multiple values in one applet trigger. This is shown in the data below: 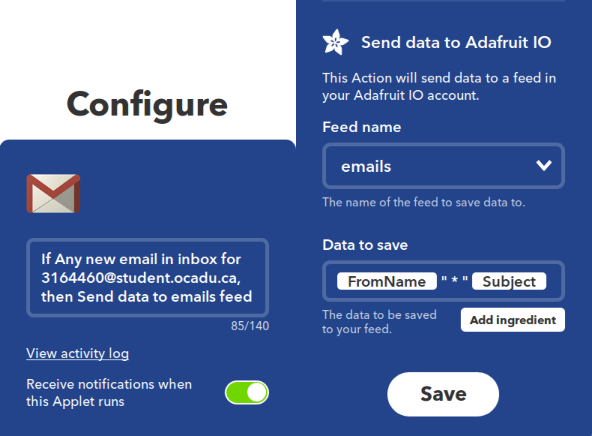 Results from testing showing data with a delimiter and data without

To get values from Adafruit IO i made a “GET” XMLHttpRequest() to the following endpoint -> https://io.adafruit.com/api/feeds

Note: To access the response data, I noticed that I had trouble getting the returned data when trying to pass the incoming data to the reqListener function as a parameter. When doing this, I wasn’t able to print any of the received data to the console, however I realized that when referring to the current object as this.responseText, I was able to access the returned data by using a reference to the JSON keys to refer to the elements i.e feed.name and feed.description

The results printed to the console are shown below.

The JSON response was then parsed and printed to the screen. Below is the result of the test showing the sender and email subject of the last received email in my school email account.

Once I had my proof of concept. I switched to my Wikipedia Applet that returns the word of the day.