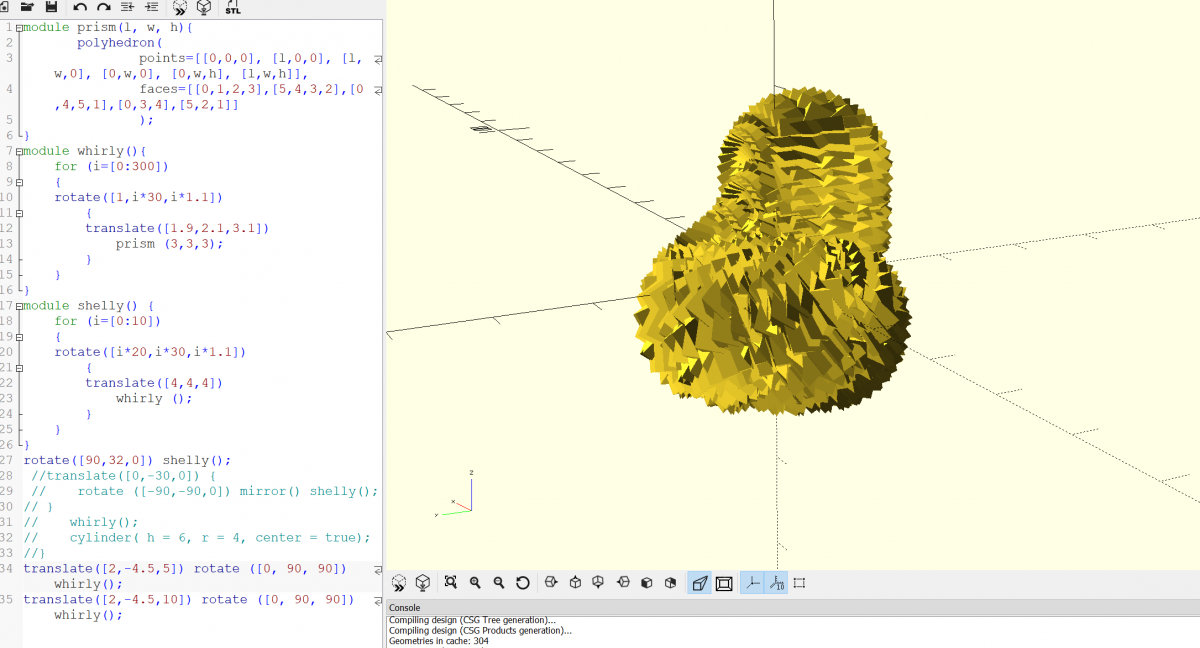 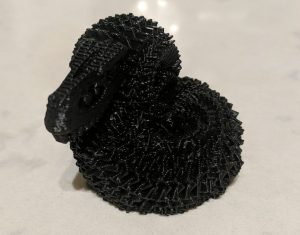 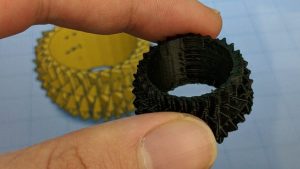 Organics by Numbers is an exploration of the possibilities in generating shapes using mathematics rather than by-hand CAD design. Starting with the objective of creating an “impossible” object, an exploration of using for-loops within OpenSCAD led to a shape with an organic feel. That shape was transferred to TinkerCAD and further manipulated to create a wearable ring and a monstrous figurine, both with a similar segmented texture, with the feeling of having been “grown” rather than built.

The concept of creating shapes and patterns that have the feel of having been grown, yet do not exist in nature, has applications in speculative design, design fiction, and storytelling. What kind of world would cause organisms to grow in this way? What uses would a mineral with these properties have? 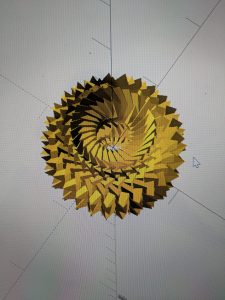 The direction of creating an “impossible” object immediately got me to thinking about creating a shape using a mathematical function. I had previously experimented with procedurally generated visual art using functions in the MindPainter project, and I was excited to see if OpenSCAD could accomplish some of the same kinds of psychedelic shapes.

It took some time to get familiar with OpenSCAD’s model for creating custom shapes (modules, as they are known) and wrapping my head around the way they must be plotted as points and sides. There’s still a lot more for me to learn, so rather than fall down the OpenSCAD rabbit hole I settled on starting with a simple prism module. I experimented with that shape by creating a for-loop that translated and rotated it a few degrees with every loop, and ended up with a new shape I found interesting. The OpenSCAD code can be seen in the images below.

I turned that shape into a module and ran it through another for-loop. 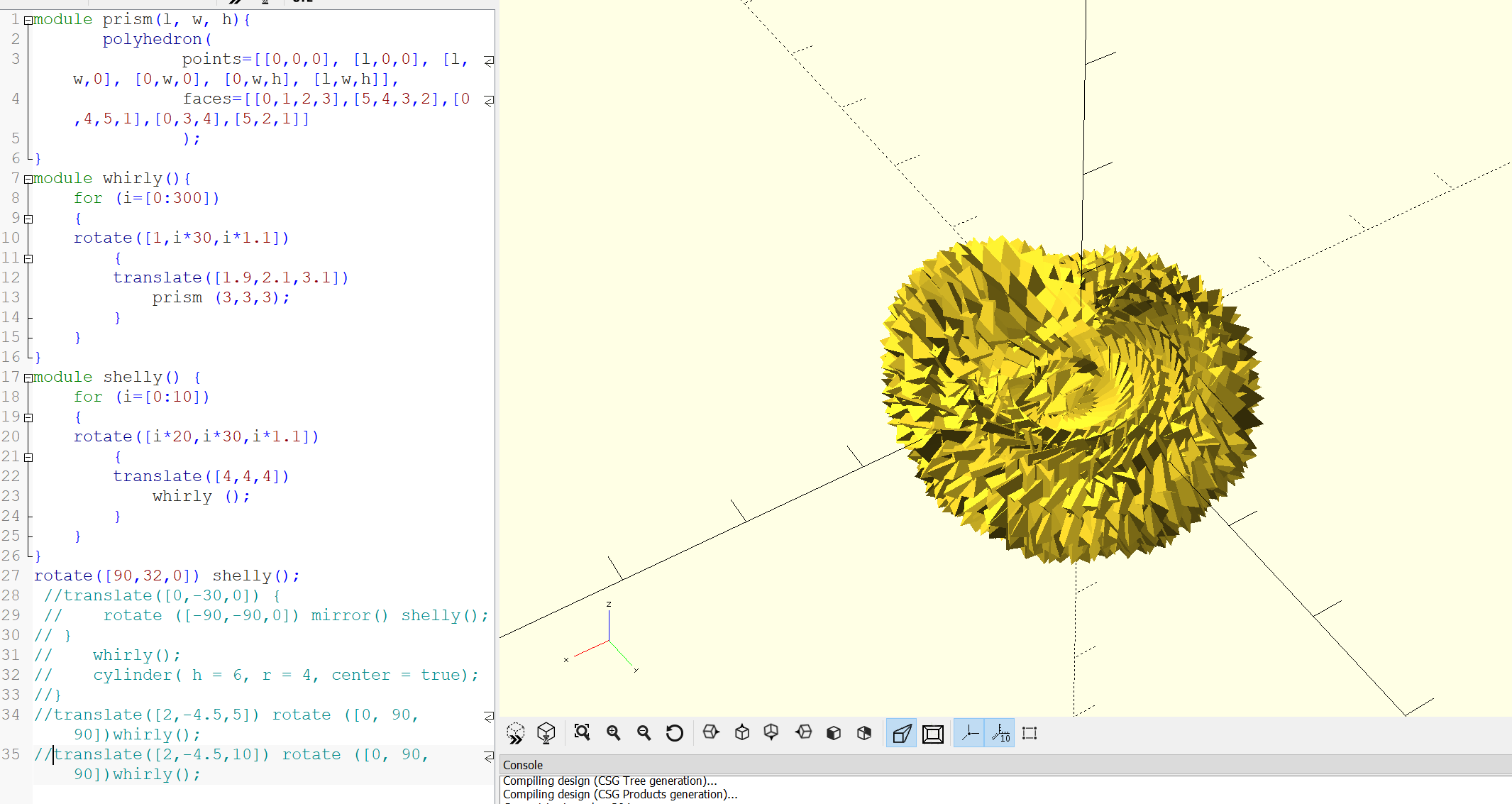 This shape reminded me of a coiled snake, or a spiral shell.

I liked the organic feeling of this shape; it looked to me like the segmented skin of a sleeping dragon or an otherworldly mineral deposit.

I ran more experiments using for-loops, but the shapes lost fidelity after being repeated many times and began looking like large spheres. I resolved to end my explorations for now and make use of what I had.

My first instinct was to print the shapes as they were, like beads. Upon consideration, I decided this was not the endpoint of the exploration and that more work was necessary. What was the affordance of this impossible shape, and how might it be used? Chatting with classmate Olivia Prior, who was making a set of rings, clued me in to the idea that this repeating organic/mineral shape might be used to make jewelry.

I struggled with OpenSCAD for some time, trying to get it to subtract space from a shape in the way that TinkerCAD could, before realizing that I could just port my shape to TinkerCAD and do it there. 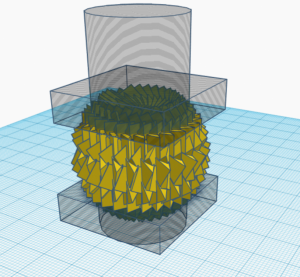 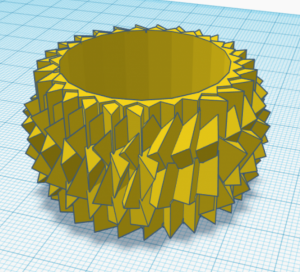 Back in OpenSCAD, with the extended spiral shape, I experimented a little more with rotating and translating in order to build up the shape to look like a rearing snake. 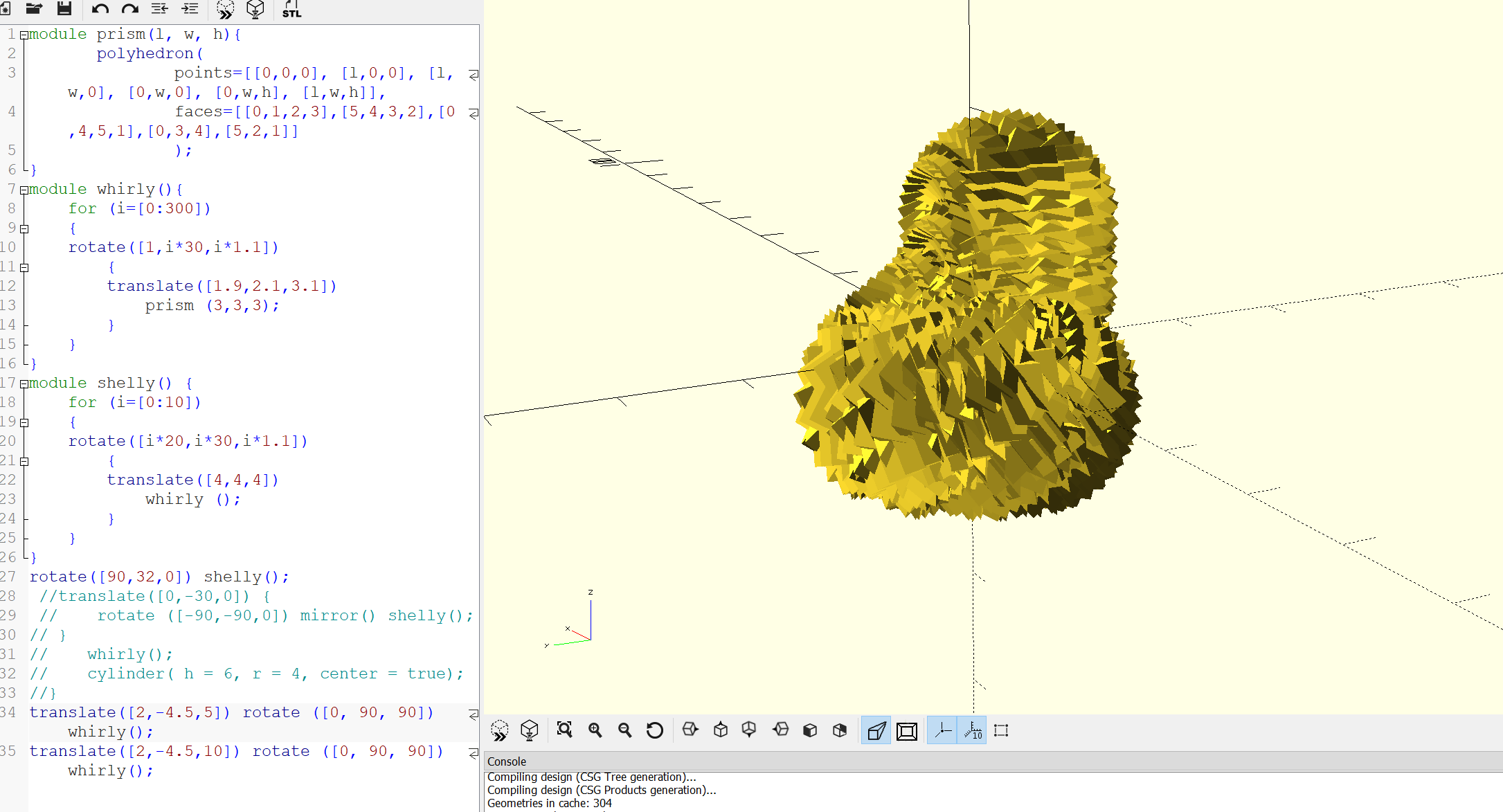 I ported this shape into TinkerCAD and used parts from their provided Printable Dinosaur Kit to create a head for the snake. 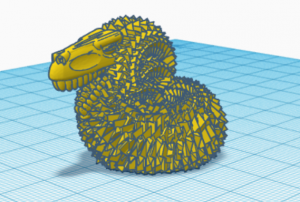 Finally, I measured my finger and resized the ring using TinkerCAD’s ruler. Aside from an unexpected few minutes where the machine refused to move, my prints went off without any trouble.

I removed the supports from the ring and the snake with a pair of pliers and my fingers, and sanded down the interior of the ring so it would be smooth and comfortable.

Having had no practical exposure to digital fabrication prior to this assignment, I undertook this project with an exploratory mindset rather than a goal-oriented one. The exploration in OpenSCAD led to the discovery of a function that interested me, which led to the creation of a shape I wanted to create with, which led me to discover the interconnectivity of the tools we’ve used thus far, which allowed me to polish and complete the two prints. There was no intended result, save to discover what was interesting and executable for me within the time frame.

Special thanks to Olivia Prior, from whom I took the idea of making a ring.

Images are by Nick Alexander or are labelled for reuse.