Don’t forget to turn up the volume while watching!

The first project, named “Noise Generating,” was done in Pure Data with OSC or Open Sound Control, a protocol that, like MIDI, transmits music-related data to allow musicians to perform on instruments. We can wirelessly transmit OSC data from our iPhones or other devices, unlike MIDI data, which is transmitted over a network. For this project, I was inspired by the “Interactive Music” workshop held by the “Digital Innovation Hub” in tpl.

As part of our research, we created a prototype for children’s lighting that is not only lighting but also possesses an interaction capability to create a simple connection between the object and child in order to highlight the role of the child in this context. Through this interaction, children are also given the opportunity to learn how to affect this object through the use of two elements of light and physical function.

There is a natural curiosity in young children about the sights and sounds in the world around them that leads them to explore them. Despite the fact that children cannot touch, smell, or taste light or sound, they can still investigate their properties. When they hear and feel sound, they are able to experience its properties. A child experiences light by feeling the sun’s warmth on their skin and by observing the colors, shadows, and reflections created by light as it interacts with the world around them.

Children’s moods and behaviors can be affected by lighting, as science has long known. There is evidence that bright light heightens emotions and affects appetite. In the daytime, blue light can be energizing, but it can also disrupt sleep at night. For kids with sensory processing difficulties, specially designed lighting systems in enclosed spaces can be tremendously therapeutic. Therefore, sensory bright lights such as LEDs can simultaneously calm children’s nervous systems, stimulate their sensory centers, and help train self-regulation while at the same time calming their nervous system. 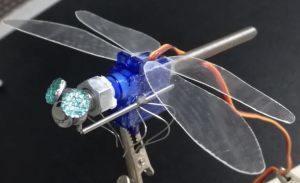 The gesture sensor detects finger movements and controls the rotation direction of the 360° continuous rotation servo with Arduino.

To create the dragonfly, a gesture sensor, a servo, Arduino UNO, and a bunch of random household objects (a screw, glittery jewels, etc) are used. HomeMadeGarbage is a creator that shares projects on the Arduino project hub, and their projects often involve household “garbage” that is repurposed into a cool and creative physical computing project.

DroneHow is a content creator that primarily produces videos about drones and RC-related products. Although he had also conducted a few mini projects with various Arduino kits, these were simple, but they showed potential for being used in a variety of projects.

In this mini project, three different LEDs were turned on and off sequentially. Although the circuit was simple, we were inspired to create a more complicated circuit to control a group of LEDs on and off, as well as to add multiple effects and patterns. In addition to making the lighting more appealing and interesting for children, these patterns also allowed us to use more than one color harmoniously.

In terms of spinning the strings around a vertical axis, we were inspired by carousels. Carousels are amusement rides with rotating platforms upon which riders are seated in the shape of various animals (most commonly horses). Carousels are known by a variety of names around the world, including merry-go-rounds, gallopers, jumpers, roundabouts, hereabouts, and “flying horses”. 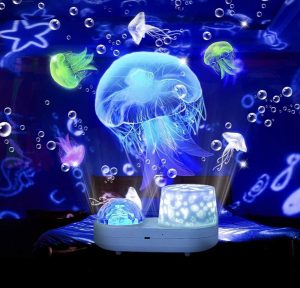 Making a child lighting concept was directly influenced by our first conception of a carousel machine. Their similarities lay in the way they were both rooted in the world of children and also in their use of light, and sometimes movement, as their primary elements. It is not absolutely necessary, but a soothing night light can be an excellent addition to a child’s room or nursery. There is no denying the fact that the dark can be frightening. It is also possible to provide a child with a sense of safety and comfort while he or she drifts into dreamland through the use of a night light.

As part of this project, we initially had to figure out how to make the material follow the verb we wanted. However, we then developed the rough sketch into a more practical concept that could be used in real life.

The first idea was to use the concept of the night sky and stars to create a comfortable space for kid users to relax their minds and body. This will enable them to settle in for the night. However, we decided to not just help them relax, but also provide them with a multimedia experience that allows them to be able to hear nature’s soothing sounds while playing with their lights. Furthermore, we wanted the lighting to be not only fascinating to play with at night, but also charming during the day.

For this project, it was also essential to maintain an active idle state as much as possible. To put it another way, we wanted to create an interaction that is still alive and breathing even if the kid user is not using it. In order to achieve the intended effect, it was critical for us to have smooth movements. There needs to be a gradual transition between idle and moving states so that children can get involved in the process.

We created the desired atmosphere using blue and white LED lighting and the sound of water since there is something about the sound, the rhythm of the tide, and the swell of water that evokes total relaxation in the body and mind.

According to a study published by Live Science, these “non-threatening” sounds are a natural calming veil of sound that is soothing and relaxing for the brain. This allows us to relax and even sleep through these types of non-threatening sounds.

It would be great if we could expand this lighting concept to incorporate other visual concepts and sounds and even different color palettes for each. Additionally, the ability to use more than one material and verb could make a significant difference in the lighting design. Furthermore, the scope of the project would be changed if multiple servos were added with a variety of actions.

Each part of the project was carried out on separate breadboards. It consists of two breadboards – one for the interaction with servos to swirl the strings, and another for the illumination using LEDs.

In order to make the strings not stick to each other, we first attached a piece of cardboard to the continuous servo horn, then knotted a bunch of strings to that, and then added stickers, tiny bells, and beads to make them more visually interesting. Also, a soothing lighting design with natural sound was created based on the idea of using the sea element.

The function was simple enough to be handled by a child, as well as interesting from the perspective of using technology. The circuit is controlled by an LDR to detect light and darkness. When the swirling direction is changed and the circuit is sped up, the circuit is directed to start. In the idle state, the strings still swirl about and the LEDs flicker. The layer covering the light sensor, however, begins the actual interaction, which continues for as long as the light sensor is covered, but when the light sensor is no longer covered, the speed returns to a slower motion in a clockwise direction.

If the speed is increased, even the sounds of the bells hanging at the ends of the strings can be heard, and together these effects will deprive the child of his or her essential role in the interaction.

Regarding the LEDs, it is also worth mentioning that we used the Arduino UNO for this circuit as it was more convenient to use jumper wires on it and it also was no need to use the Nano 33 IoT since it does not interact with the network, but still, the diagram could be done with Arduino Nano 33 IoT. We also make the Fritzing diagram with Nano Arduino. 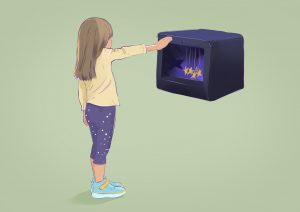 For this sketch, I used an ultrasonic sensor and a micro servo. When a vehicle arrives, the ultrasonic sensor will be activated to raise/lower the gate according to the distance between objects. When an obstacle is detected by the sensor, the Arduino board will send a command to the servo to raise the shaft by degrees. After a few delays, the shaft will return to its original position. I also used a USB power supply, but battery power would also work.

In this code, a genetic algorithm implemented from scratch created “these tiny objects,” which evolved to find the best path to a target, moving around obstacles. It was a very long code that took me a lot of time to analyze the core concept. 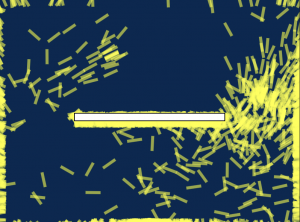 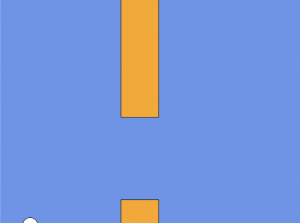 This is my first actual experience so far with p5j, and I have to say, I didn’t expect it to be that fun to do!
I wanted to experiment with a few things, especially in terms of random coding objects, which in this case are the snowflakes, their positions, and falling. The way this code works is an array of numbers, and it increases the numbers that it increases each element in that array and draws a point at each element where the element like the X value of canvas is the array index and draws a point kind of randomly and adds a random number to them and resets them.
Also, adding the “mouse dragged” function was about to speed up the process of accumulating the snowflakes at the bottom so that over time it looks snow is filling the canvas, and it seems the bottom of the canvas gets filled with snowflakes dots and would create a fun interaction between the code and user. 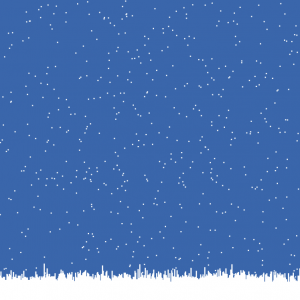 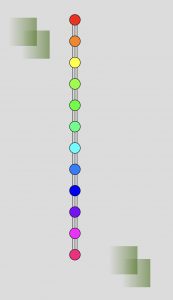