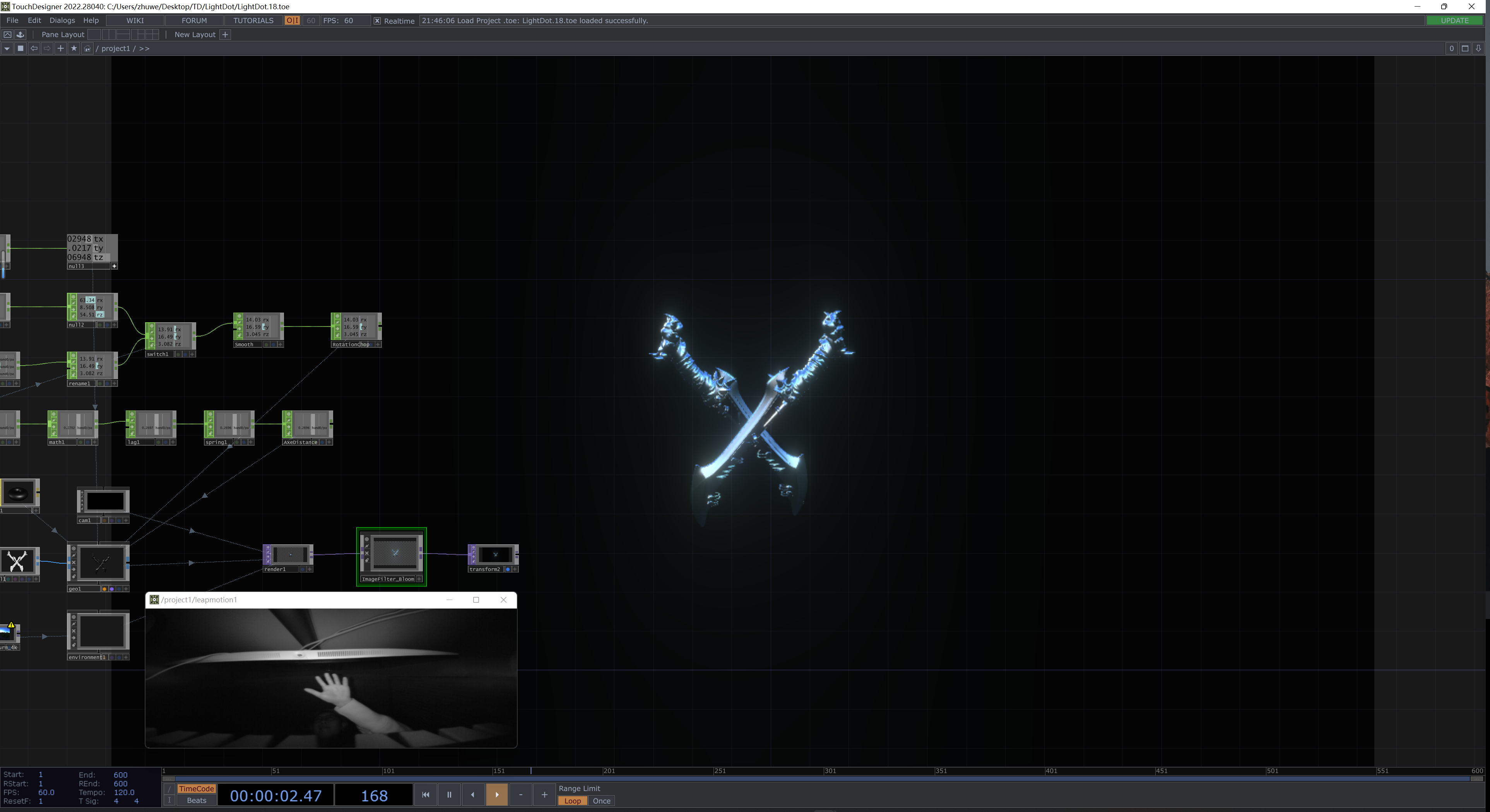 I used Leap Motion to get the data of my hand (x/y/x parameters) to control the rotation and the size of the model.

This art installation was created by a group of students – Li Yude, Ni simiao, Peng Zihan, Zhang Rui Rui, Liao Kaixin. They are from the School of Visual Arts Design of Guangzhou Academy of Fine Art. The Invisible Animal was a project of a course Arduino.

3. Description of the Work

Humans uses their five senses to identify animals by the differences in animals’ physical characteristics. If there is an invisible animal, what kind of behavior and physical phenomena of the animals will be present?

This artwork is an Arduino project. They use Arduino to control the Standard Servo in order to simulate the impact of animals on the environment. Animals do not exist in the project, they forged the footprint of the animal and some sound, which can create some evidence to show an invisible animal.

We were inspired by this artwork when we came up with our original concept. Before building our project, our team brainstormed theme-related ideas, including environmental considerations. Using standard servo was our main agenda to keep our project flowing.  After watching the invisible project, we were inspired to think of using “force” as one of the verbs in Richard Serra’s verb list and incorporated it into our work. We wanted to create a game where audiences can follow some clues to find an answer or treasure.

B. Freedom – The Underground Railroad

Jarek Nocon – Born in Poland, he obtained a degree in Graphic Arts as well as a Master of Arts from the School of Fine Arts in Warsaw, where he grew up. Jarek gained experience in cartographic publishing, designing maps in the old style. He runs his own business, creating illustrations for board games and computer games.He cooperates with the publishing house Rebel and Academy Games.

Stephen C. Paschal –  (born 1945) is an artist who has been painting most of his life. After living in Paris and Germany, he settled in Hawaii in the 1960s. “Conflict of Heroes” series & “Grand Tactical Series” (GTS) game cover illustrator.

3. Description of the Work

Freedom is a card-driven, cooperative game for one to four players in which the group is working for the abolitionist movement to help bring an end to slavery in the United States. The players use a combination of cards, which feature figures and events spanning from Early Independence until the Civil War, along with action tokens and the benefits of their role to impact the game.

Players need to strike the right balance between freeing slaves from plantations in the south and raising funds which are desperately needed to allow the group to continue their abolitionist activities as well as strengthen the cause.

As we continued our research, we became convinced that a board game would be a good idea to create a game with Arduino. We noticed that the map of Freedom – The Underground Railroad is interesting. We were inspired by the game design and the structure of the maze. We found the game very engaging as each point was connected which had a follow and allowed players to explore different places on the map.

C. Concept Inspiration of our project

We tried to create a storyline to make our game become more attractive. And we refer to some science fiction. We think about this film with the simple storyline – the astronaut should live on Mars relying on himself. We realized that we can also make a simple background like this: An mission is that humans should survive on a planet so they need to find some food or energy to help them live longer, otherwise they will die.

“An astronaut becomes stranded on Mars after his team assumes him dead, and must rely on his ingenuity to find a way to signal to Earth that he is alive and can survive until a potential rescue.”

What can we do to make an Arduino-based board game more engaging and fun with light sensors, LEDs, buttons, and servos, as well as how it will work with nonhuman materials such as steel and paper?

Taking inspiration from the invisible animal project, we started off with a few rough sketches for building the Environmental scene and decided to make a theme base board game.

Considering our research question, we wanted to explore the interaction between LEDs, sensors, and buttons and create a space where players can explore each part of the game. In order to make the game more engaging, we decided to have a map-like structure where a player can choose paths to move in the right direction.

After some research, we hold up upon an idea that was inspired by the movie martin, In which we decided to create a theme of “Survival on another planet” the basic idea was you landed on a planet and you need food and water to survive here. The game was initially envisioned as a treasure hunt type of game where players had to find treasures that would provide them with food in order to survive. This is how the “Mission 3-EVA Expedition” was born.

The game has been designed more cohesively with more depth and components to make it more engaging for  future prospects. The whole game can be customized by the people, in terms of maps(Puzzle blocks) and barriers.

Change from the flat surface to hexagon cardboards to increase the randomness of the paths.

To begin the game, the first player rolls the dice and moves forward according to the number. As the player moves forward, the LED lights lighten ups with a help of a button that indicates the path.

This game is about 4 astronauts from 4 different countries  (India, Europe, USA, China) who were sent on a mission 3-EUA expedition on planet A-286 in the year 2089. However, a severe dust storm threatens to topple their spaceship and loses their connection with NASA. Ten days have passed and the consumption of all the food and water is over, your mission is to survive on the planet and find the hidden supplies in the next two days, otherwise, you will die.

Blocks – A set of hexagon-shaped cardboard blocks comes with a picture of the path to design one’s own maze for the game.

Barriers – A set of 6 barriers that represent Rain, Snowflake, Aliens, Mountain, Radio, and Tornado, which obstruct player pawns when they land on them. On the maze path, this barrier must be randomly placed.

Box – the box material is made up of wood which consists of Arduino, and breadboards, and the surface of the box has sockets on the top to plug LEDs, Sensors, and supply boxes.

Power – The main power comes from the plug which is attached to the bottom side of the wooden box. A player has to simply attach the plug to a switch board.

NOTE ：There is a fixed position for each of the six supply boxes on the wooden box’s surface. Players have to just place the supply box and connect the plug with a socket.

Blocks – LEDs, light sensors and button has fixed position on the hexagon blocks.

Supply boxes – Supply boxes consist of a magnets base for stillness and a plug to attach the Arduino wooden box.

In order to explore Arduino as a whole, we divided the work into three sections: motors, timings using light sensors, and LEDs which were later incorporated into our game.

When the player moved through the maze, a series of led lights and buttons indicated where they were on the pathway of the game. As they roll a dice, each step light up the led with a button on the side to keep the game going.

As a player approaches one of the treasure boxes, light sensors will activate that box, and with the help of the standard servo, the box will open up to show what’s inside, as long as the player is close enough to the treasure box.

We have used a nonhuman material “steel” as a pawn for the game. In order to open the box, the player first comes into contact with the steel pawn, which activates the sensor.

Link to the code

Using Light Sensor to light up the LED and rotate the servo motor about 90 degrees.

link to the code: https://drive.google.com/file/d/15_krwe9mTdOibB-L4n2lr_HTtnH_VDyp/view?usp=sharing

link to the gif: https://drive.google.com/file/d/1Xvnl3HLscNTijrFqwMG9HdZTY82ZY438/view?usp=share_link

I combine both of audio and poseNet in the sketch3.

Link to the video: https://youtu.be/JvPE5-jWPME

Link to the code: https://editor.p5js.org/zhuwentianzz/sketches/qbX96y5yI 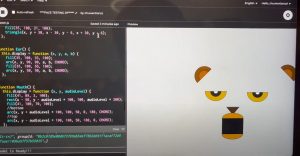 Link to the video: https://youtu.be/IEqRVuOWZhw

Link to the code: https://editor.p5js.org/zhuwentianzz/sketches/d9KfobS3d 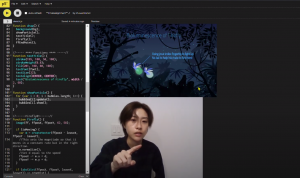 I applied ml5.js poseNet to the project. The bubbles follow both of my wrists, and once their alpha value turns to zero, the bubbles would fade out and delete from the array. 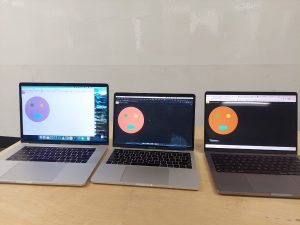 The idea behind this was to understand the color with emotions. The emoji colors change into various different other colors and people with the same one win.