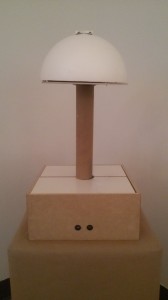 Mushroom Buddy is an interactive moving musical instrument that lights up and lets people create music without physical contact with them. As the name suggests, it befriends anybody who comes near it and generates different melodies and light intensities based on the proximity and the movement of the person.

The idea began with a moving object that could attract attention of people in their running schedule to let them produce musical tones similar to everyday mechanical objects around them.

The moving mushroom detects the presence of people with Ultrasonic Sonar sensor and on coming closer, pauses to communicate. There are two photoresistors with each one connected to LED matrix and the speaker. Based on the movement and the relative position of the person, the change in the intensity of the light causes variation in the frequency and the amplitude which are amplified and sent to the loudspeaker.

The Mushroom Buddy consists of the following components: 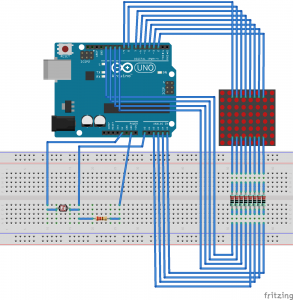 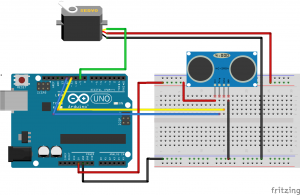 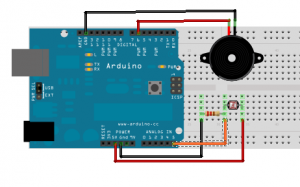 The initial construction began with trying to make each component work individually. The sonar triggered servo and each photoresistor initiated the LED matrix and the speaker. It was with the LED matrix that I ran out of pins on Arduino and took another to connect the sonar, servo, photoresistor and loud speaker. Then came the fabrication which was a very essential component of the design. I started off by creating a wooden base on which the structure could stand. The next step was the stem of the mushroom that was to rotate with its upper cap carrying weight of not only the structure but the microcontroller and few of the elements inside. I tried different materials and diameters of the tubes to not only hold the structure but light enough to move easily without causing a lot of friction. Finally picked a cardboard tube that complemented the wooden base structure and the appropriate weight required. The cap of the mushroom was a flat wooden base with a Styrofoam dome and this weight was easily managed by the tube. 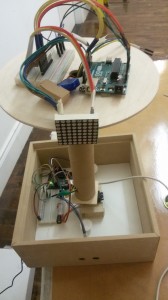 There were few challenges face at different steps of the process like:

Don’t end up getting squashed!!

Trying to get into an elevator or subway, the alarm system is smart enough to detect the presence with effect to light by using sensors and hence, the door slides back if need be. 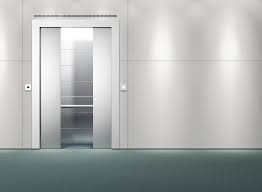 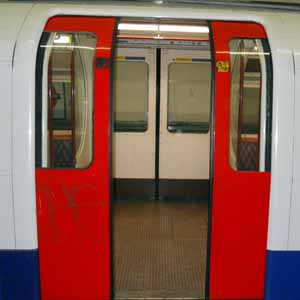 I replicated that by using Photo resistor sensor which not only signals through LED but also raises an alarm if the object is in close proximity. 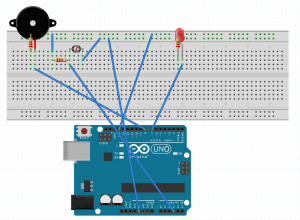 Here you can also find how this sensor works. 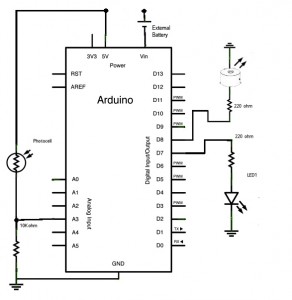 Started off with breaking the bird into pieces and after multiple iterations, was able to let it beep as an alarm. I used the sketch of ‘Blink without Delay’ and connected it to the bird. So the output was two types of robotic tones and now the bird beeps along with the blinking LED. 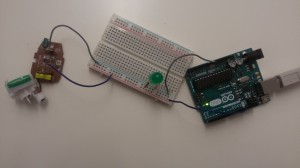 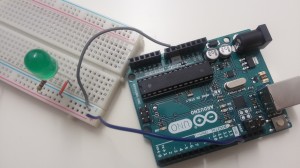 You may also see it working here