Weezy Wonder is a Stevie Wonder fan down to the dark glasses and his mushy song loving heart. He waves you over, falls chronically in love when you come over ( as indicated by his blinking heart) and insists on singing you a song while you hold his hand.

I wanted to keep my tamagotchi design simple but able to evoke amusement or joy in whoever interacts with it. Hence Weezy’s romantic crooning action.

I bought a  ‘rocker’ hamster toy and removed some of his old wiring parts from the inside to make room for this version of this toy. The wiring which included:

The initial idea was to use a pulse sensor as it was suggested it would be much more interesting to have Weezy sing a song based on someone’s heartbeat. This was abandoned because the readings seemed unreliable and would not always trigger music as it should.

The handwave that stopped working a day before the presentation:

All the wiring was connected to an arduino board overlayed on the Sparkfun VS 1053B MP3 Shield, and a breadboard and inserted in to various parts of Weezy’s body.

Weezy’s emotional cues and reactions are based on the following computation:

Despite the testing of multiple code variations, the song trigger would not occur more than once unless the arduino was uploaded each time. Two codes were written using the sample code library provided by the Shield and these resulted in no song playing at all so they were abandoned.

In the days leading up to the Gallery presentation of Weezy, I tried to a few back up plans that were still based on using the MP3 Shield.  I wanted to somehow get Weezy to play random songs based on a sensor. Since my code was so faulty, I resorted to trying  a tested code where  a motion sensor triggers the playing of songs. While the sensor worked, the song would not play so that was then abandoned. The shield seemed very sensitive to most other coding add ons.

I tried to have just one song play instead of a number of random songs, just so that it would still play each time someone held Weezy’s hand instead of needing to be uploaded on the arduino application each time. Removing random still did not work. It would only still work once and an upload was required so it was laptop dependent to the end. Regardless the only code that worked even with the uploading each time was the only workable version I could get to perform close to the concept of playing a song each time.

It was baffling how the slightest change to related codes stopped the music playing. On the day before the show, the hand wave had to be scrapped as the songs would not play if I included the servo code for hand waving and the sonar stopped working on matter what I tried. His heart stayed ‘on’ all the time.

To make the vibrating action, I used the motor in our toolkit, linked the wiring to the nodes on the button and linked those same wires to a power source (9volt battery). The linked and taped power section was then inserted in to a window cleaner roll. 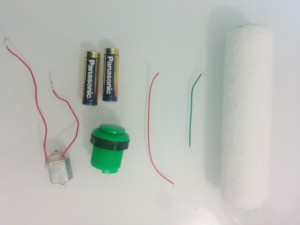 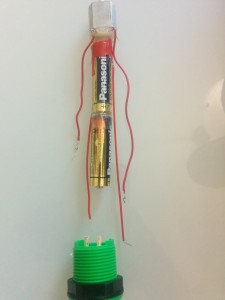 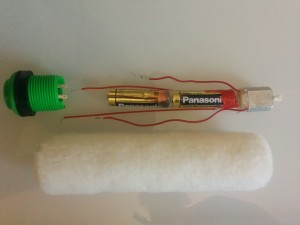 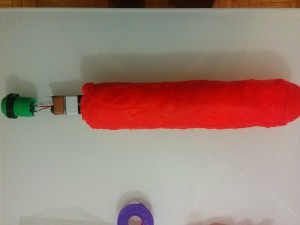 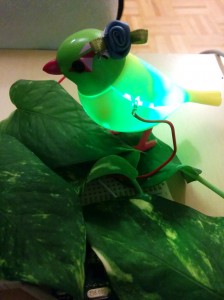 After much struggling with the inner processor and other ambitions of making the Blink sketch work through the bird’s own processor (and failing). I decided to light up the birdie.

I used the Blink Sketch in the arduino examples and placed a pulsing green LED light within the birds’s body.  Birdie now sits in the bush (covering the arduino board), lit up and flowered. 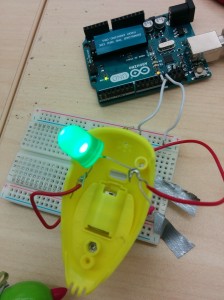