From our mad lib cards – proximity (sensor), DC Motor (actuator), paper (material), and angry (adjective) – we created an animated diorama depicting a boat in an angry sea. We used two DC motors: one that makes the cyclone revolve, and the other making a small paper boat with a miniature sailor move up and down. As people get closer to the piece, the motors increase speed, giving the audience the all mighty power to control the elements.

We decided on an agitated sea because we wanted something that expressed anger in a way that’s symbolic, but also playful and relatable in a representational way. As water is capable of taking on many forms, we wanted to experiment with various ways to form paper. The properties of paper we amplify are its lightness and malleability, or how it can be folded and cut to reach its volumetric potential. 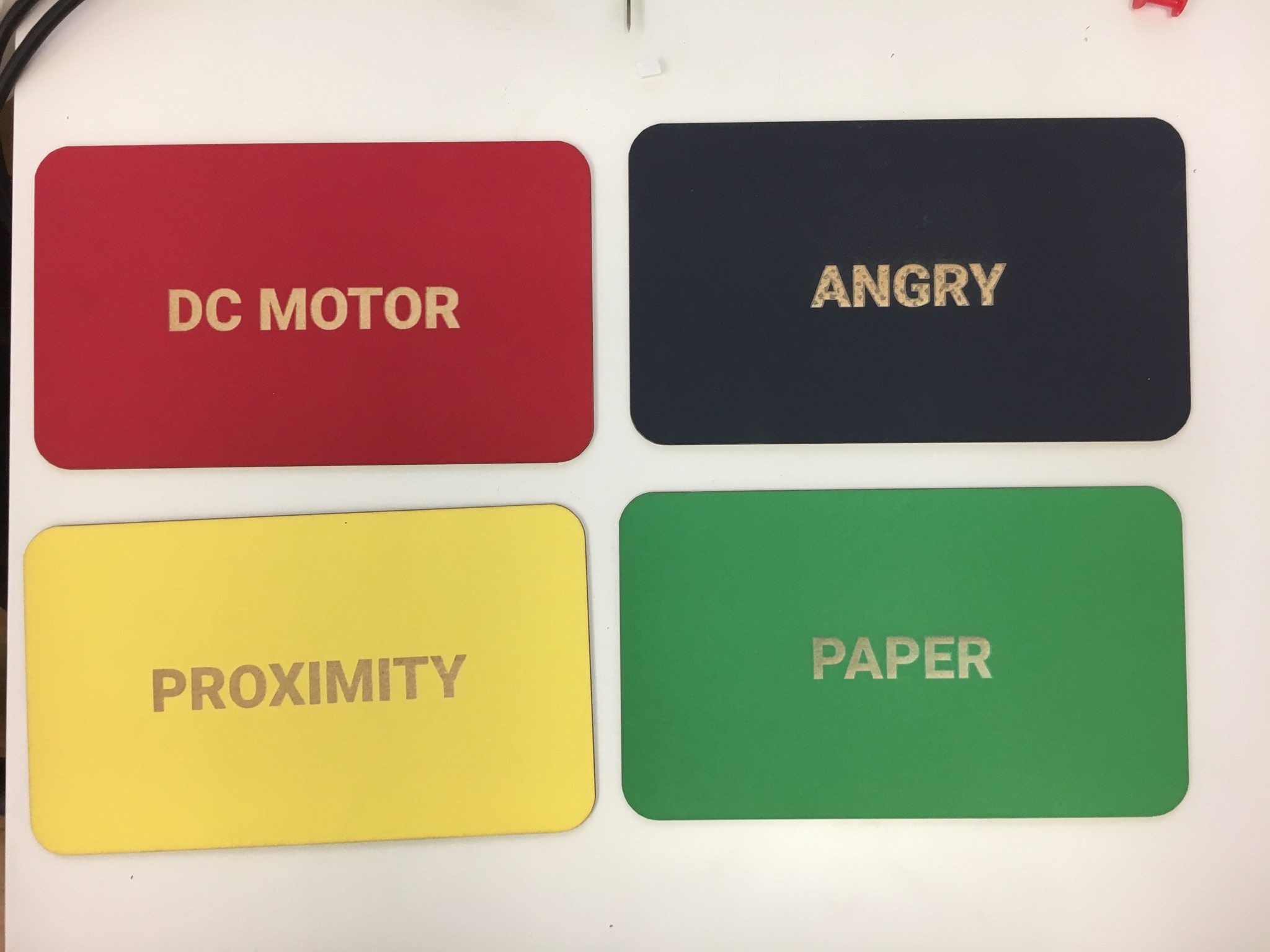 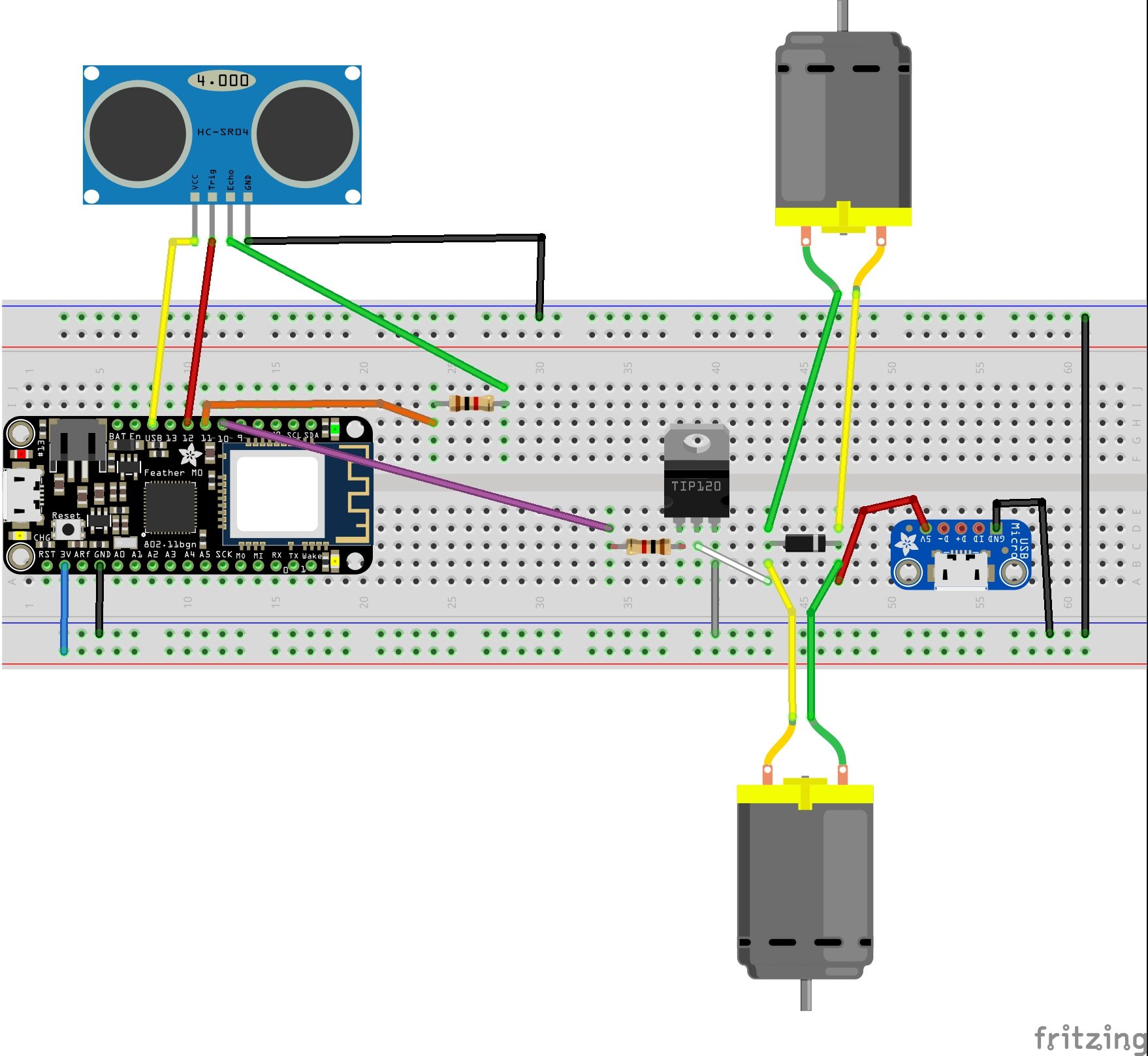 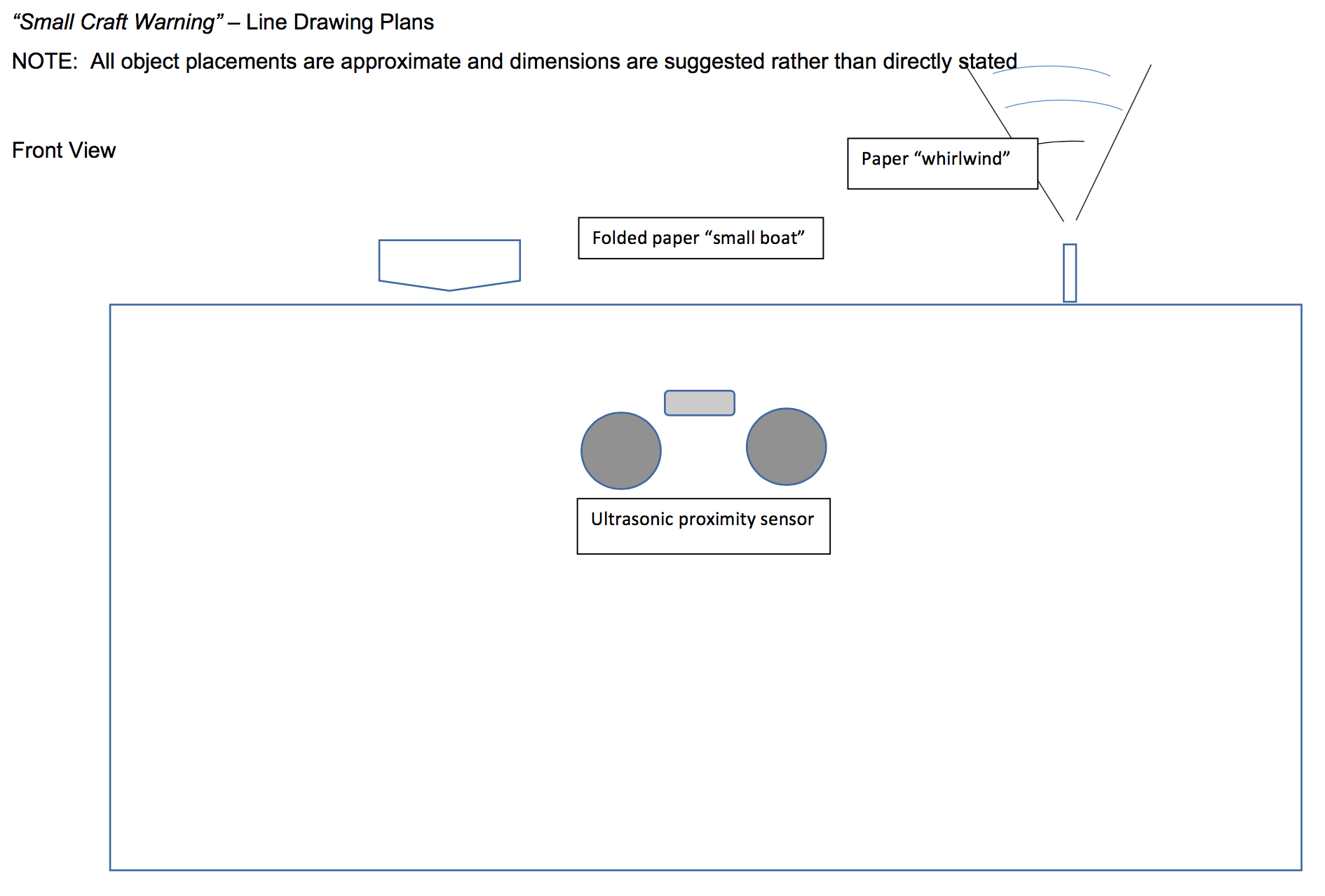 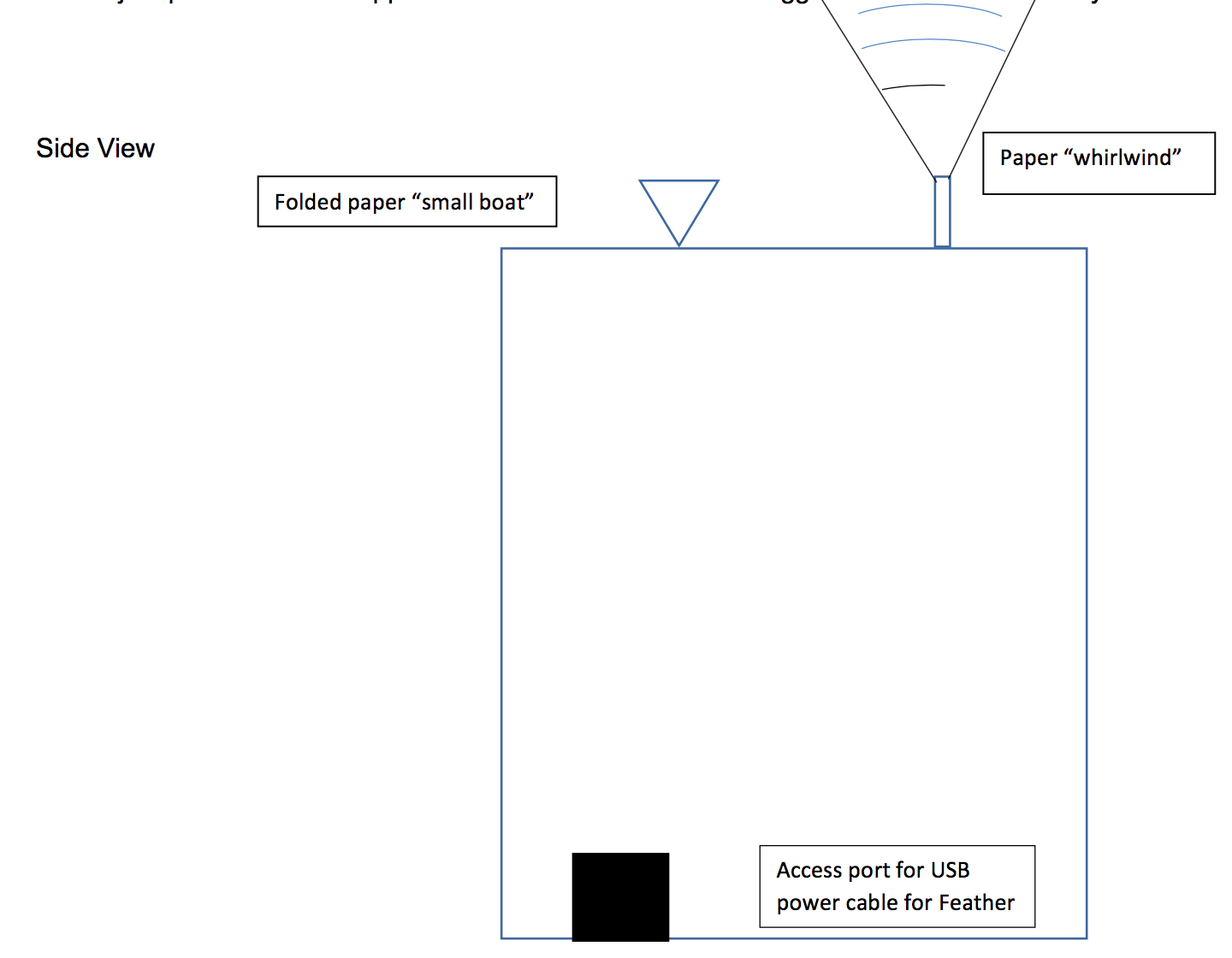 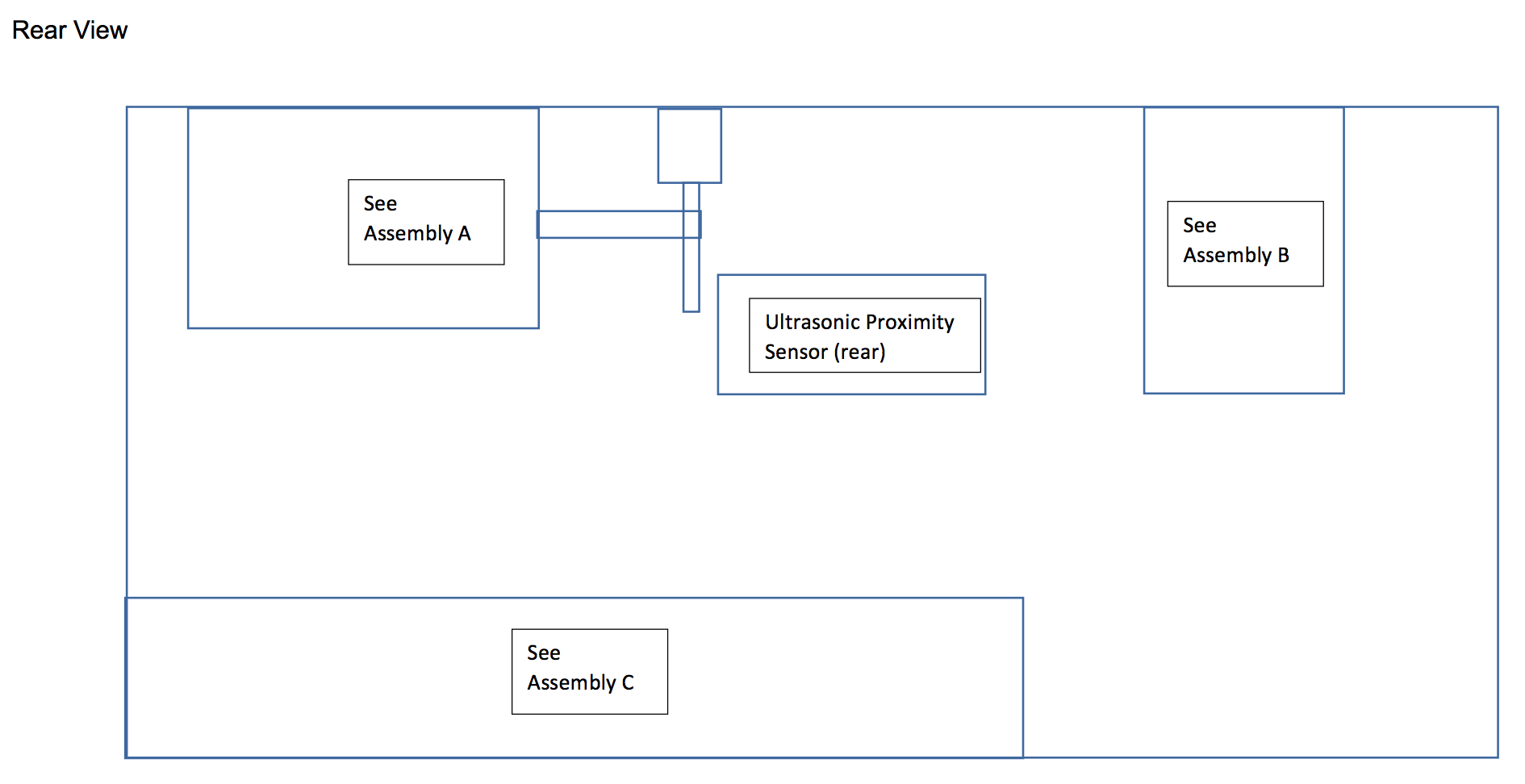 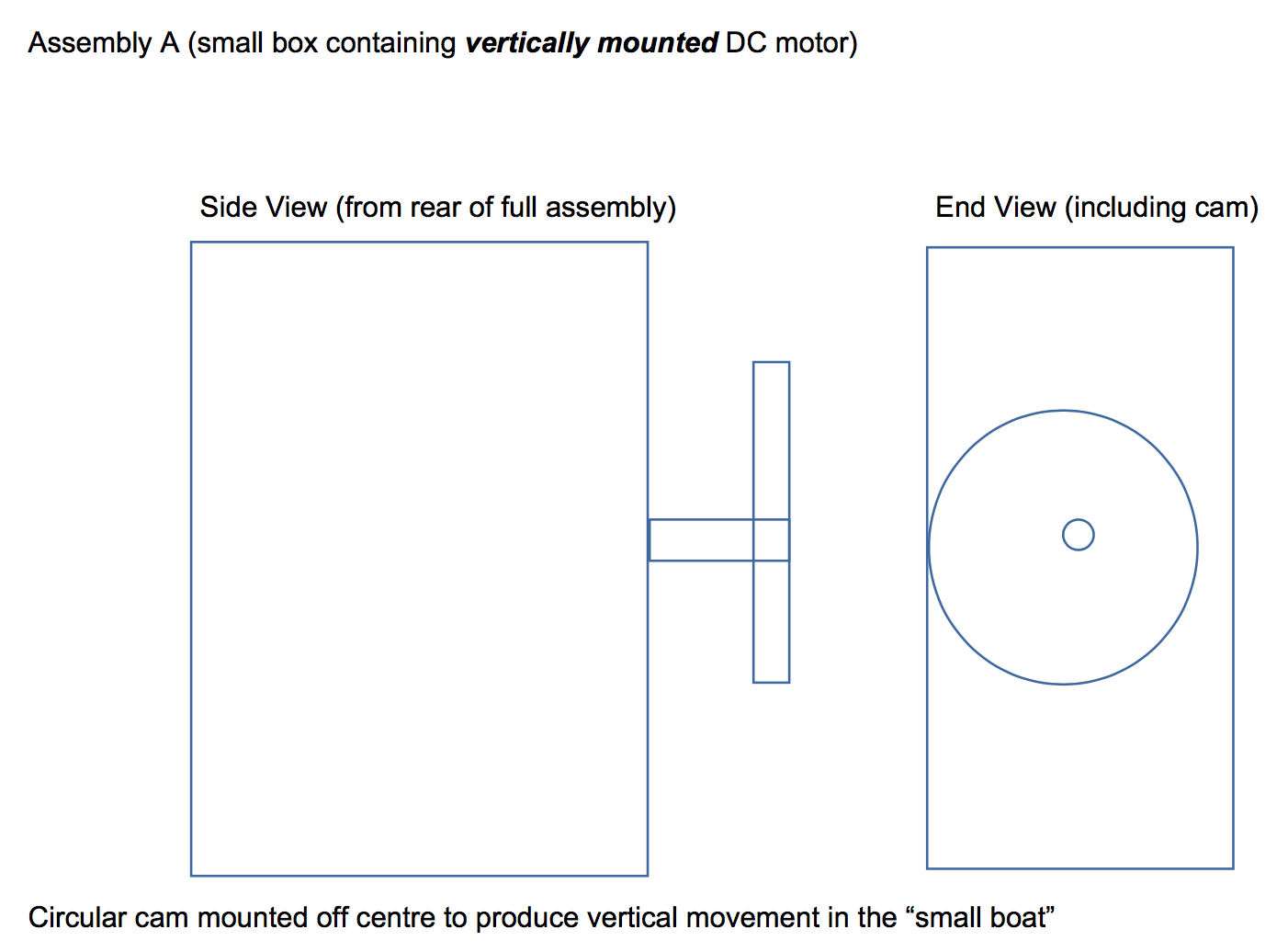 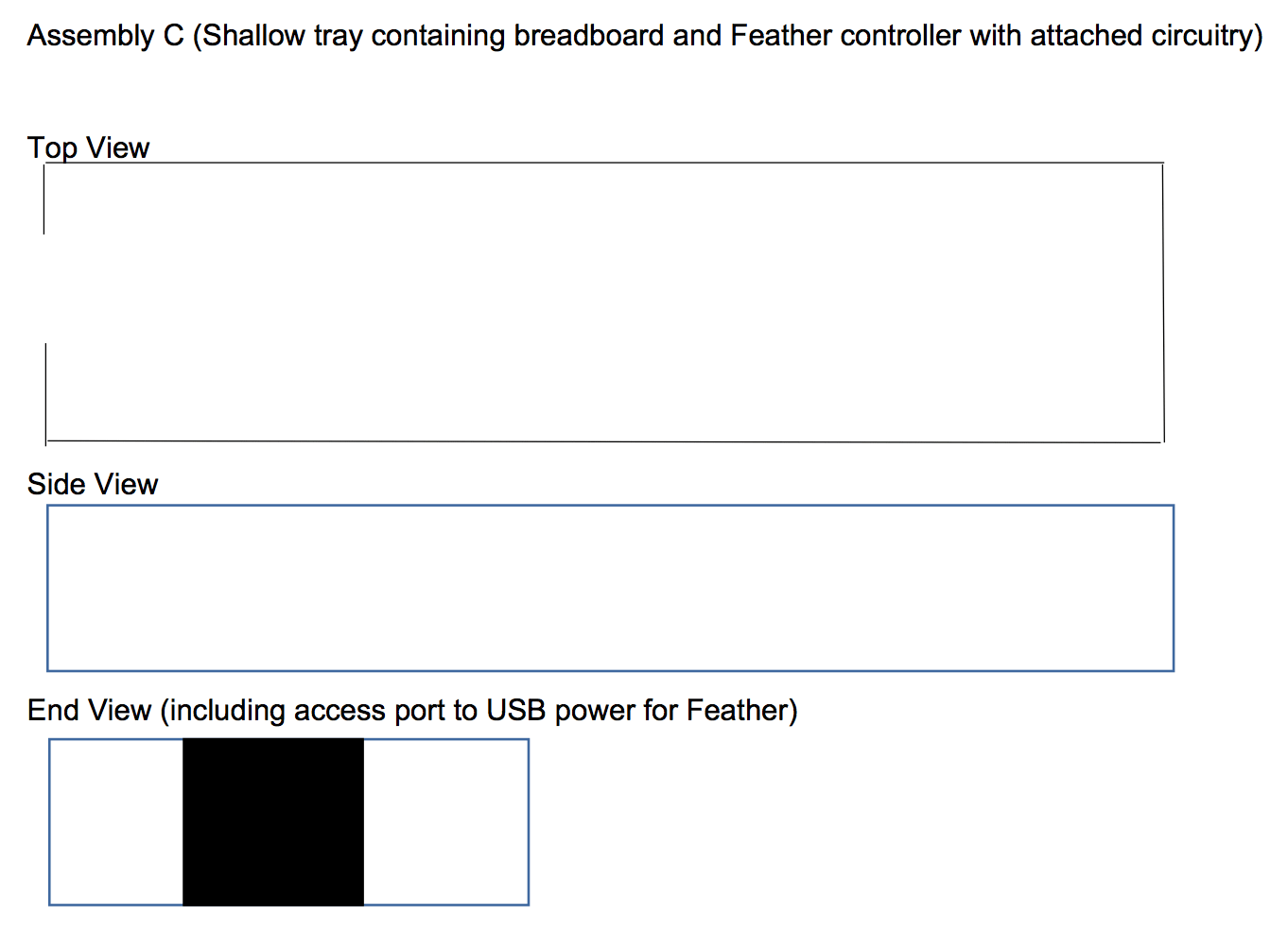 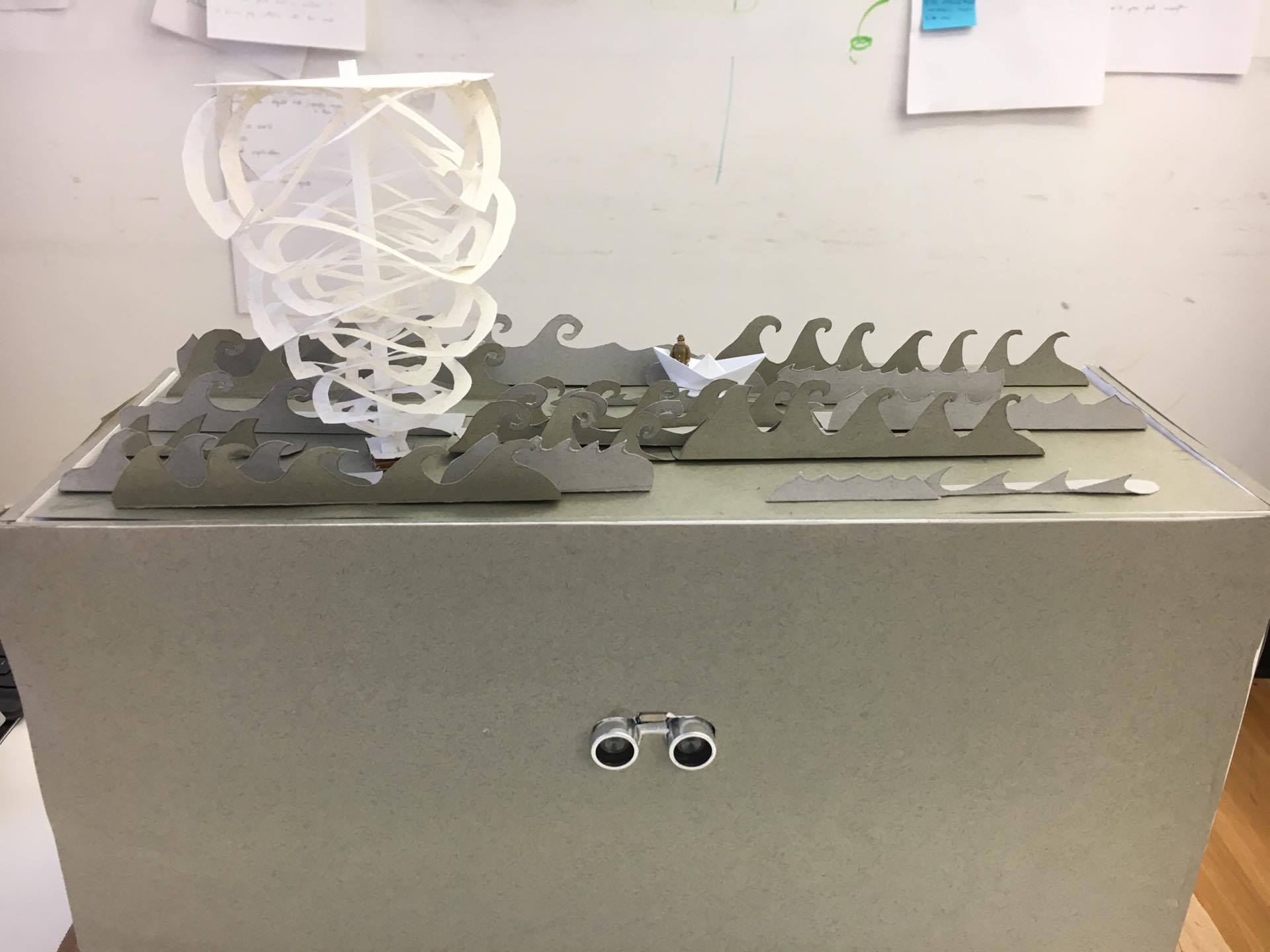 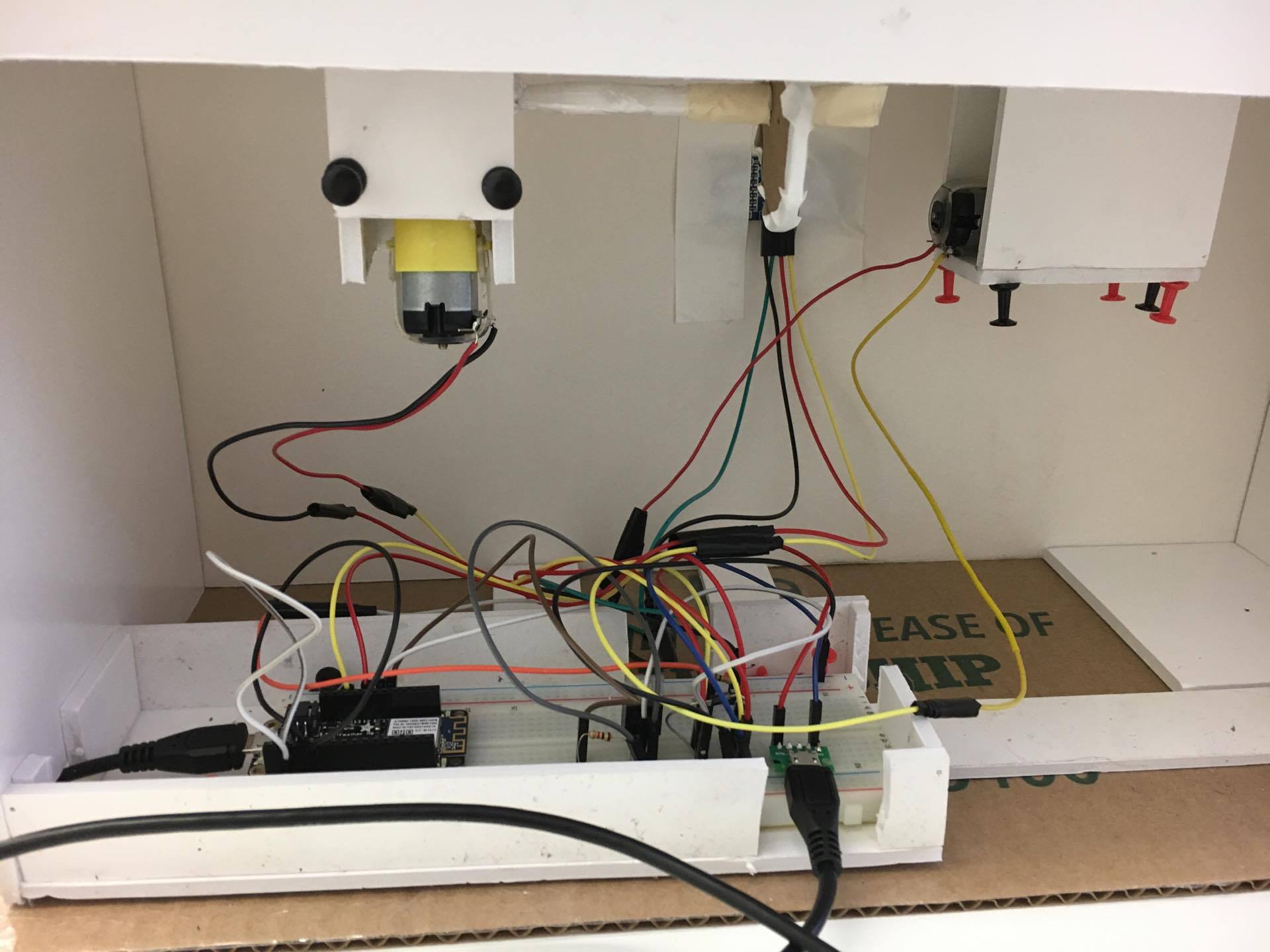 Sept 29th: After learning how to use the Feather controller with Arduino, we began by testing the proximity sensor with the code provided by Kate and Nick. Once we downloaded the NewPing library, we were able to successfully operate the ultrasonic proximity sensor. Testing the distance numbers in the serial monitor, we changed the maxDistance it could pick up input from 200 cm to various numbers, in order to see how close someone would need to be to our sensor for it to operate. We kept the maxDistance at 200cm so only people in close proximity would be recognized by the sensor.

Next, we tested our DC Motor using the code provided by Kate and Nick. One problem we were unaware of was the need for an additional USB for power as the power output directly provided by the Feather can not provide enough power for the motor to run. We successfully got our DC Motor to run at 0, 128 and 255.

After successfully getting our proximity sensor and DC Motor to work in Arduino, we wanted to combine the two to react to one another. We decided to create a project that increases the motor speed based on proximity to the project. We wanted to create 3 phases: no movement (0), slower movement (128) and faster movement (255) based on a maxDistance of 200 cm. With Nick and Kate’s help, we were able to combine the two codes together and use “if” statements to allow the two pieces to “talk” to one another. 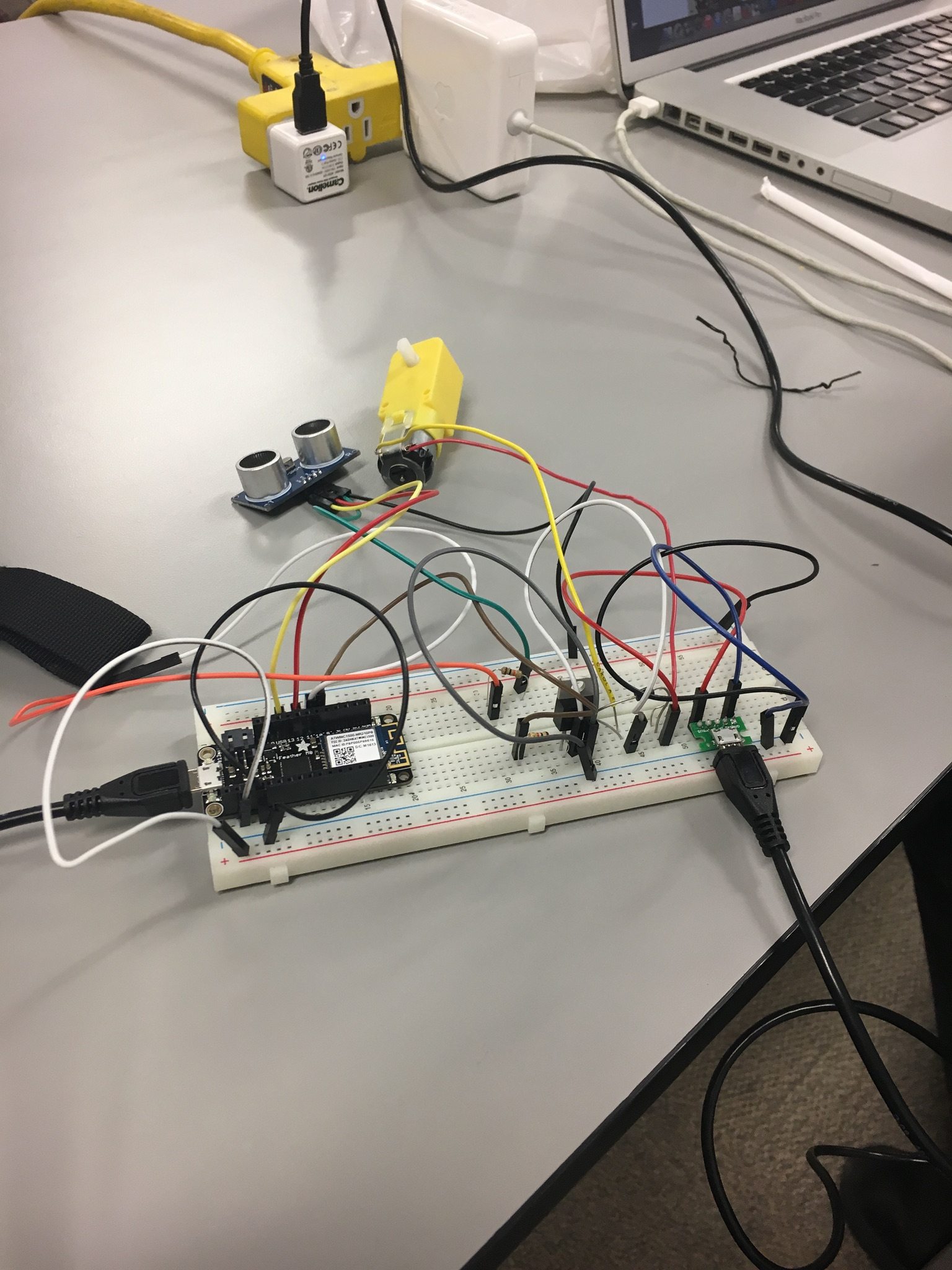 Once we were comfortable with a basic code, we began discussing our ideas for the project. Dave wanted to do straws with flags that said “go away”, Kylie wanted to create a character that spun, and Roxanne wanted to make something more abstract, such as a flower or grass. We broke after class to recollect our thoughts and ideas on where we would go. At that point, we were pretty puzzled by the way we could use the DC motor, how to transform rotating power into a movement that could be interesting to harness.

Oct 3rd: Kylie and Roxanne met to implement a plan and begin working on diagrams, the code, and the blog post. After failing to make grass move (the paper was too flimsy and the movement was not noticeable), we changed our idea to a tropical storm. Kylie was inspired by paper animations, as depicted in the “fourteenballstoy” and “robives” (links below in our project context.) We decided we wanted to create two different types of movement with two separate DC Motors: one would spin an object, extending the reach of the DC motor’s rotational points with a straw, and one would drive a cam system causing vertical motion. We decided to use the cam system to move a small boat up and down, and a simple connection to spin the “cyclone”. Roxanne did a form research for the cyclone cutting different plys of paper, as well as the folding the paper boat, while Kylie began constructing and setting the box up for our scene (cutting holes for plugs and proximity sensor, making shelves to place the motors in, soldering wire to motors, wedging the breadboard in without gluing it down.) 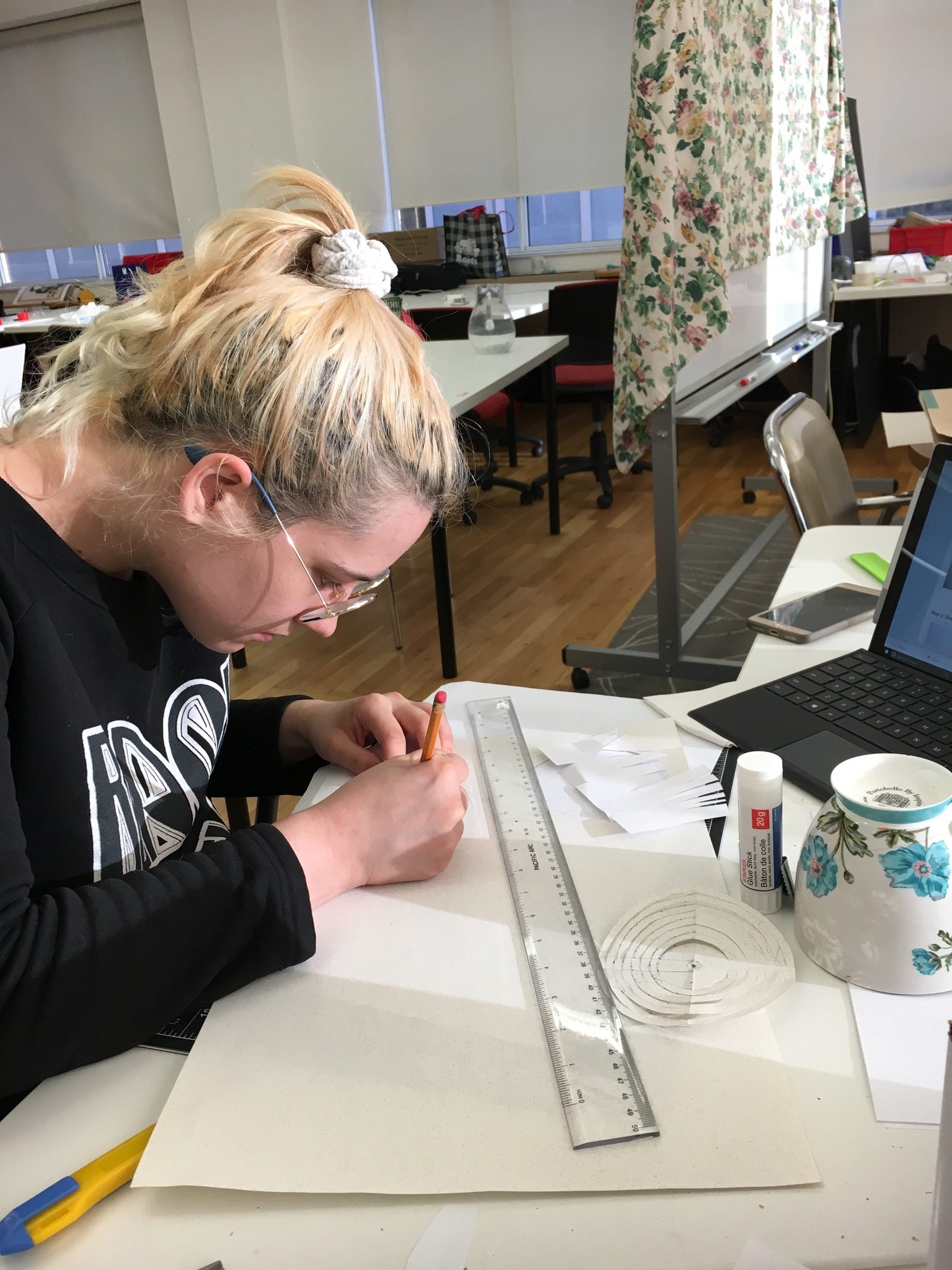 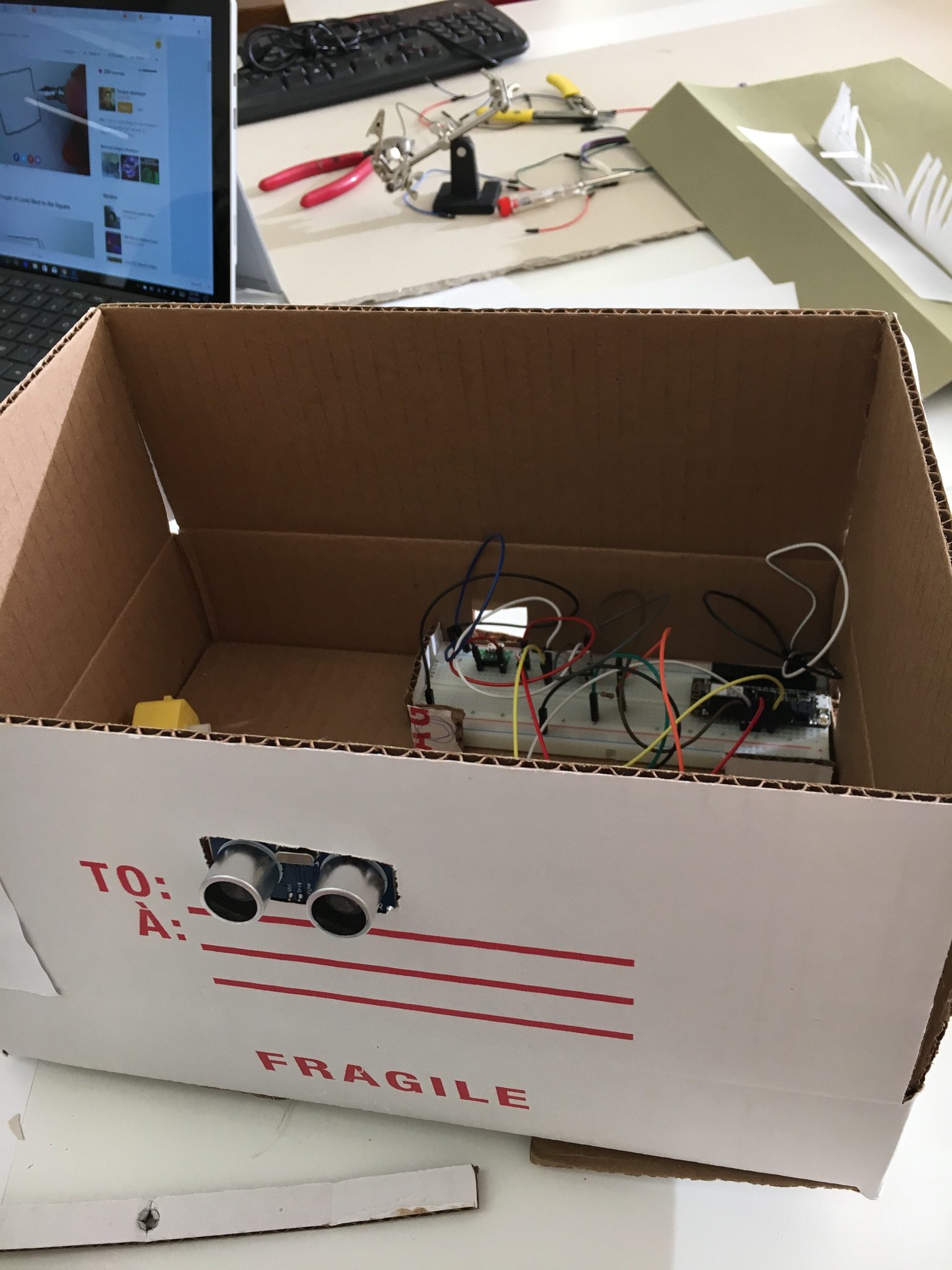 Oct 4th: The next day, Dave reconstructed the box using foamcore and white glue. Kylie attempted to connect two DC motors, but after many hours tinkering could never figure out how to get two motors to work at the same time. Nick fixed this in about 30 seconds. Rather than rewiring the second DC Motor on a new circuit, we connected it to the same circuit as the first one.

We had to wait for the glue to cure before trying the motors moving the different diorama elements, being unwilling to cause an inadvertent self-destruct circuit (as it were). While we waited for the glue to dry, Kylie and Roxanne drew various waves simulating a force 7 gale on the Beaufort scale (hence the project title “Small Craft Warning”) using 2 different shades of blue-gray paper and cut them up to arrange on top of the project in order to make an “angry” sea. We also went and bought a “sea-sick” little miniature person like the ones used in architecture maquettes to put in the boat. Its scale really allowed for a dramatic intensity in the scene. 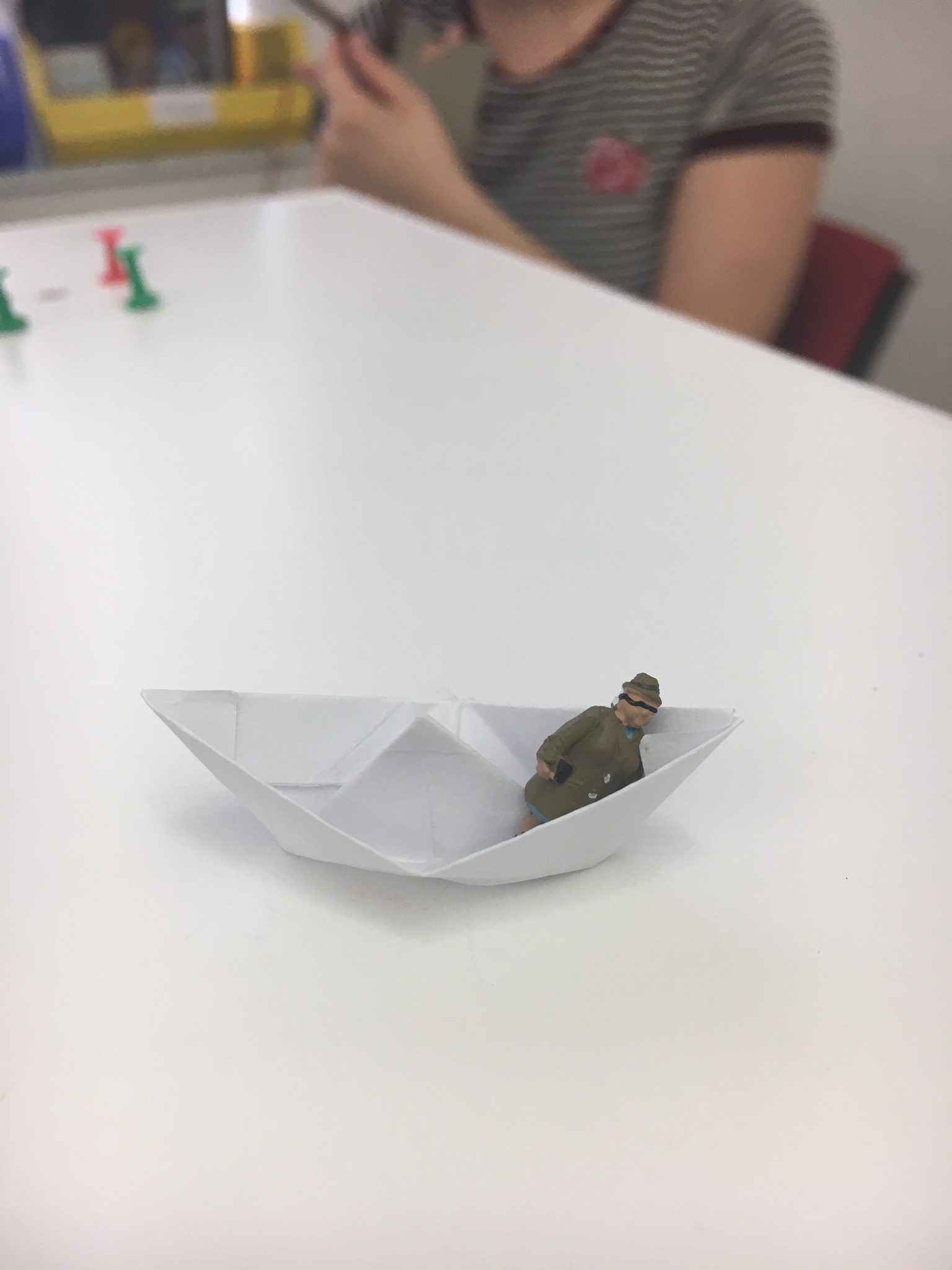 Oct 5th: Things being glued up and solid, now was the time to test our piece. We didn’t know how strong we wanted the motor so when we tried 10 it wouldn’t spin at all. We were cautious because we did not want to break the fragile paper pieces. After trial and error, we ended up testing 255, the fastest speed for the motor, and it surprisingly was not too strong. We had some problems with the code. It didn’t want to activate from further than 10 cm. The sensor was emitting a high pitched beep that we didn’t really know what to do about. We tinkered with the code, doing A/B testing, and it seemed that the motor wouldn’t start at too low a speed but could continue turning if first turned on at a higher speed. We also modified the tresholds of activation, thinking about the exhibition context and the way we think people will occupy the space and interact with our piece. People facing our piece but who are further away than 80 cm from it don’t activate it, standing between 20 and 80 cm activate the motor at a speed of 160, and standing between 0 and 20 cm from the front of the piece activate the motor at a speed of 255.

Reactive artworks are something that always seem to pique the public interest. At UQAM’s Fashion School in Montreal, one of the most famous designers and professors is Ying Gao. She focuses on interactive garments often exploring ideas such as emotions and other intangibles. In that optic, we wanted to capture or question the feeling of power in relation to something that it activated by proximity. Indeed, the viewer becomes the reason the sea is agitated, making them question their agency, literally making waves from their sheer proximity. This reactive agitation looks like a form of agency too, then putting in perspective the concept of agency as a whole.

Another artist that has inspired us is Zimoun. Located in Bern, Switzerland, he creates installations that evoke emotional, yet effortless soundscapes using raw materials and numerous motors. While we decided to create a visual rather than audible piece, Zimoun’s works depict an effective method of combining minimalism and simple components to create raw emotion.

After pondering the various permutations of the word “angry,” and following our artistic inspirations, we decided that rather than direct “angry” gestures or movements, we should go with a more abstract appela to the idea.  Various natural phenomena produce what are called “angry” scenes or situations.  We decided to fall back on the old sailor’s description of the sea being “angry under stormy conditions (specifically about force 7 on the Beaufort Scale as a gale at this level triggers small craft warnings in most ports worldwide).  This would be achievable with available materials as a diorama with mobile elements that could hopefully capture the intensity of such a scene.

We were intrigued by the idea of creating an automaton using paper. Fourteen Balls Automata provided various pieces we used for both inspiration, as well as a guide to explore various techniques to make an automaton work properly. We also used Robives.com Design for Paper Animation as a resource for mechanisms in paper animations. We specifically used Rob Ive’s cam system guide to make our boat move up and down in our diorama.

Huler, Scott. Defining the Wind the Beaufort Scale, and How a Nineteenth Century Admiral Turned Science into Poetry. Crown Publishers, 2004.