Gay Magic is a web-based game where the player has to move the objects around the site with two potentiometers in order to unlock all the mystery items such as poppers, Truvada and a chain collar. Once all items are unlocked, a spell is cast and Dionysus is summoned to start the party. 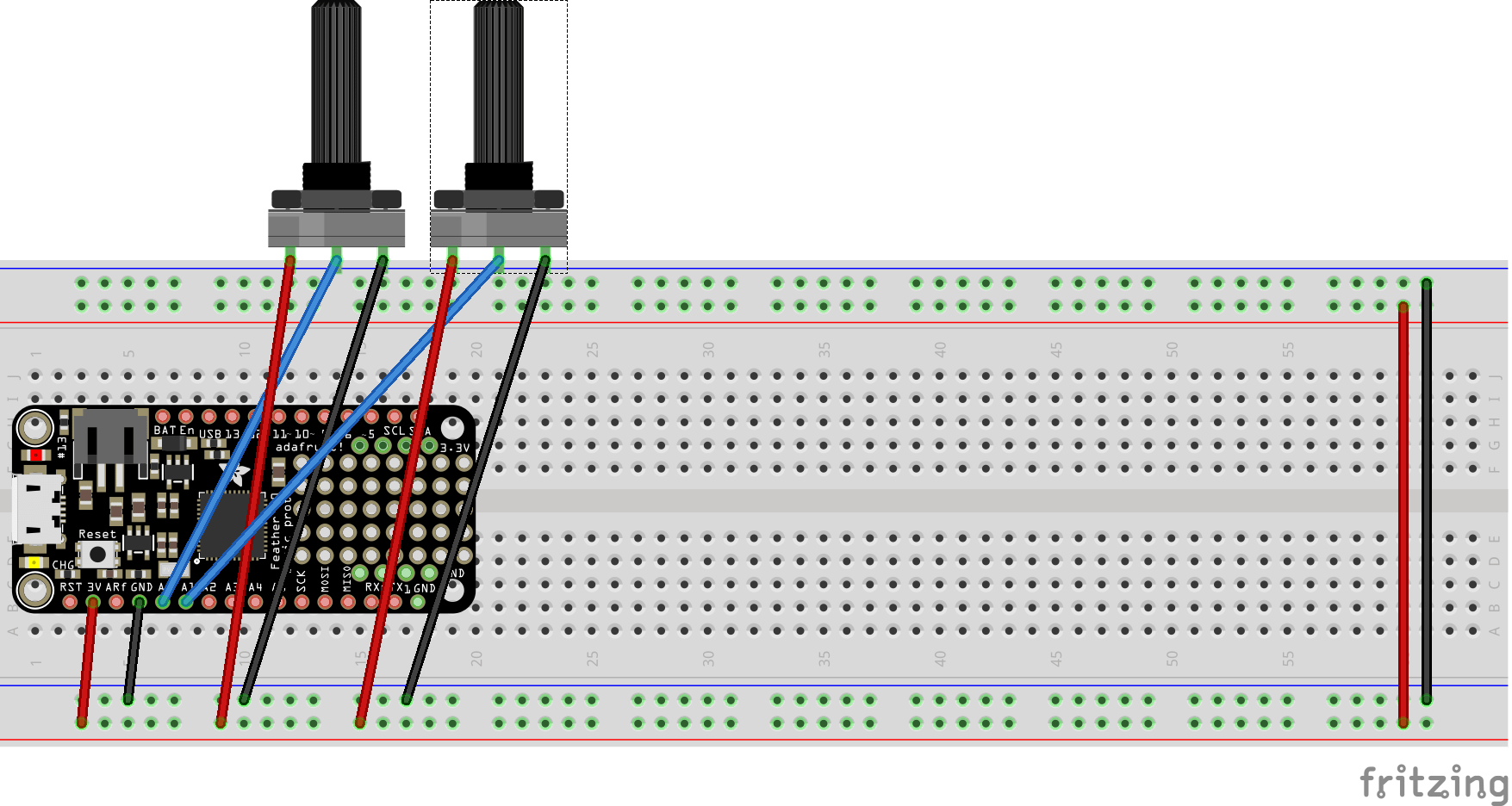 https://github.com/livefastdynasty/peripheral/commits/glitch – See how I progressed and worked through my cod.

Wiring up the force resistor 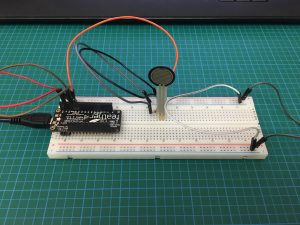 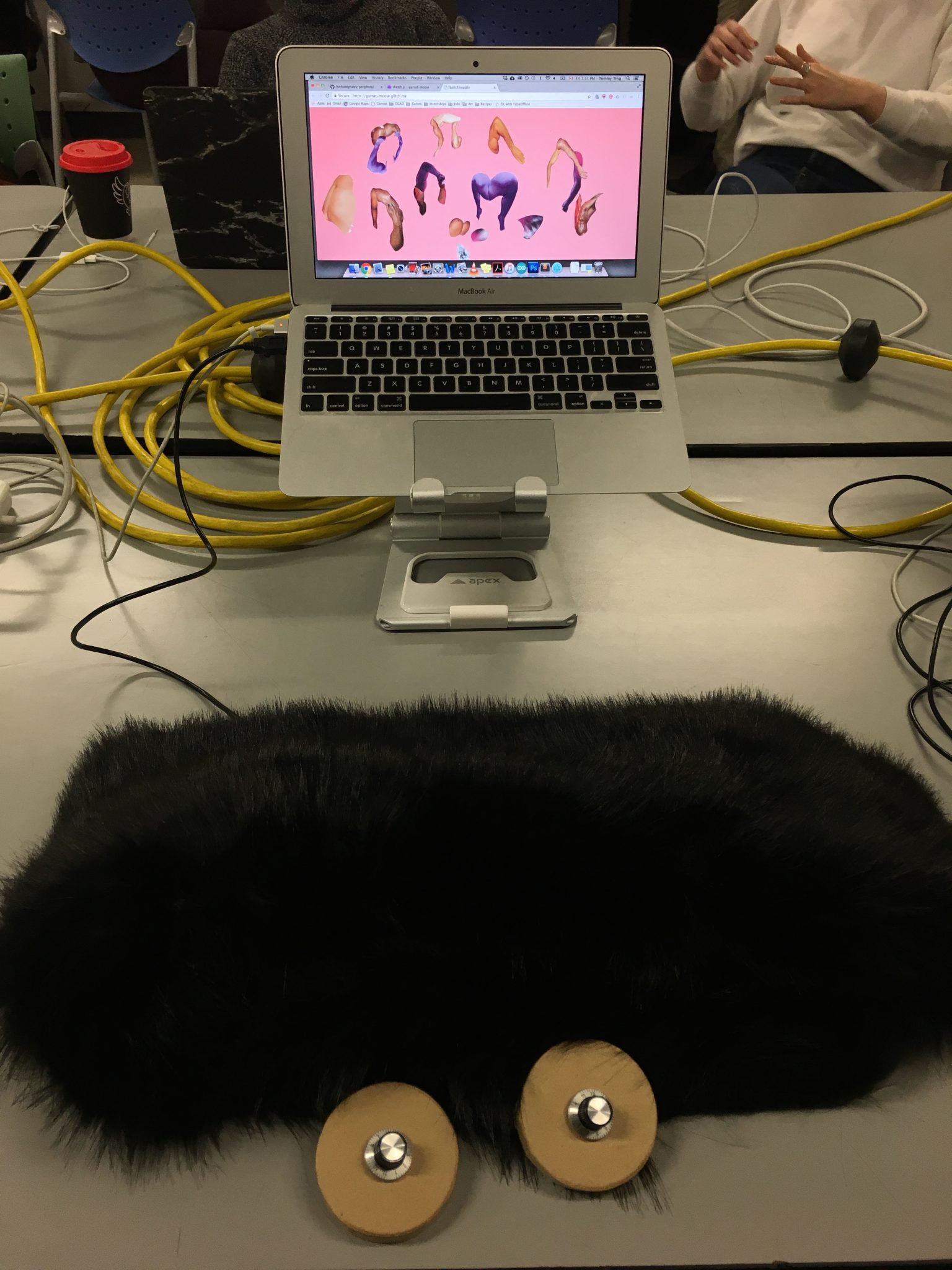 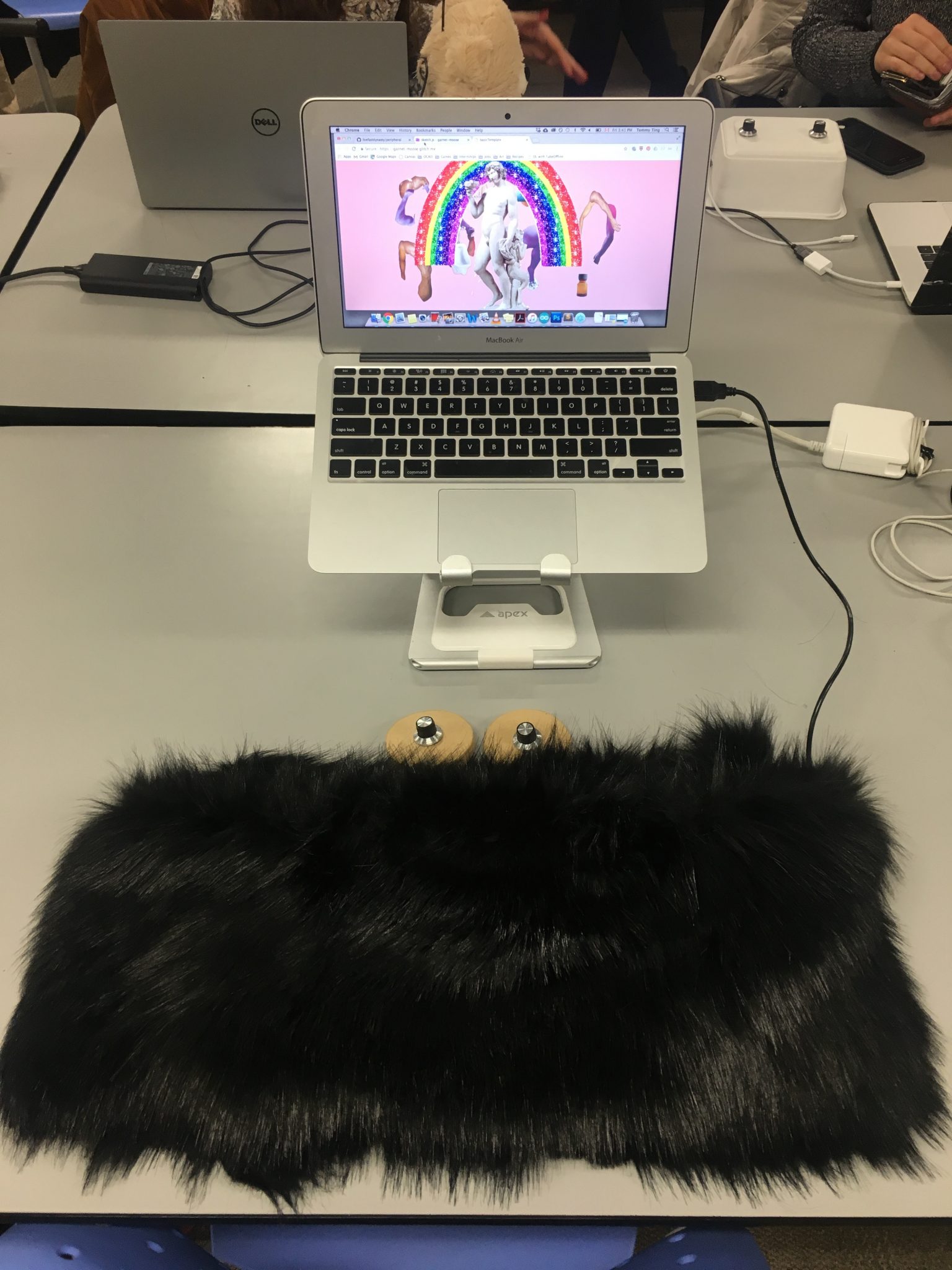 First Iteration of Dionysus without the animated rainbow

Final iteration of the Dionysus page

On my first day, I was looking through all the available APIs and found one that I was particularly attracted to called “We Feel Fine”. This API draws from many different web spaces whenever someone posts something that starts with “I feel” or “I am feeling”. From this, I was hoping to use a force resistor to activate this API with Spotify to generate emotions with a matching song. I started to wire up the sensor and immediately found it quite hard to work with because it was very sensitive, even a very light amount of force would send it from 0 to 1023. Moreover, I realized that the “I Feel Fine” API was not working as I wasn’t able to pull anything from it. I decided to move on and find another API that I want to use. After some search I couldn’t find anything that really struck my interest.

I started playing around with some photo montage assets that I have been working with in my class Possible Futures with Dr. Poremba. In this class, I have been exploring the intersection of queerness and critical future studies with performance and dance. I have been cutting up all these body parts from magazines to form new shapes. One thing that really struck me during this creative process was using these body parts to form a Stonehenge scene. Queerness and witchcraft have a really interesting relationship of radicality, Otherness and anti-normativity (I will explain in depth in my project context). I quickly used a sprite that I have previously made with some a sample code found on the Play.js library from P5js.org. I really liked what I saw and decided that I would use this experiment to further develop some ideas I have been exploring in Possible Futures and my thesis proposal.

On my third day I quickly made the first Stonehenge sprite with a crystal gem as the cursor. I wired up one potentiometer and got it to move the gem on the X-axis. I adapted the Arduino and P5 code from ITP. I had to play around with the P5 code in order to get the potentiometer to control the gem. In my P5 code, I first mapped the x.position of the gem to inData which only got the cursor to move at a very limited distance, maybe around 300 pixels. Later, I created the a var for which mapped the x-position to the potentiometer and then mapped the position of the gem to the var. The x-position was mapped to the full width of the screen which allowed the gem to move full-screen. I did encounter a problem with this solution because initially I put the var up top above everything but once I put it under the draw function it worked perfectly.

On my fourth day I tried wiring up two potentiometers so that one would control the X and the other would control the Y axis. I updated the P5 code and used the Arduino code from Nick’s example. I couldn’t get it to work and wasn’t able to find any help from my peers. I decided to put away this idea for now because I was running out of time and I wanted to finish the Stonehenge scene and make it a working prototype with at least 1 potentiometer. I then created the rest of the sprites on Photoshop and tested the collider and displacer codes found in the P5 play library, which I assigned to some assets. I played around with the overlap change animation code (also found in the Play library) to the gem cursor to make change into a different object when it overlapped on top of one of the stonehenge montage. Since it did, I went back to Photoshop to finish creating the sprites.

I found this really challenging. I revisited Nick’s example, and after some suggestions from Kate, I changed my P5 code to reflect some of the wording that Nick used in his code. I was able to get both potentiometer working but only one at a time. After a lot of frustrating moments, I gave up and sought help from my classmates. I had help from a number of people, but it was Finlay who was finally able to help me with two potentiometers (he had 8 in his project…). He told me to put everything I had in my draw function into a new function called “game”, and the draw function made it so that the game wouldn’t run unless the serial connection was established. In the ardCon function, which runs the serial connection, he told me to make the values of serialStatus switch from 0 to 1. Finally, going back to the drawing function, we made it so that 1 would start the game function. This made both potentiometers working!

Gay Magic is a game that explores the intersection of queerness and future studies through the investigation of gay identities and subjectivities, ephemerality and history. The mechanic of the game is to move around the body parts to uncover gay objects such as poppers and truvada pill. All of the artistic choices of the game are deliberated, the background is pink which reflects on the colour Nazis’ used to label gay men in the concentration camps, the body parts draws on the history of our bodies being sites of resistance, political protest and medical experiments, and the reference to witchcraft and magic references the similar shared experience we have with witches and also a general reference to 70s radical political groups. The picture of Dionysus at the end of the game is because Dionysus is the ancient greek god of play and party, which has been a symbol for Freud’s pleasure principle and for queer men groups such as the Radical Fearies.

The usage of peagan and witchcraft imagery is informed by the work of Silvia Federici. Federici argued that capitalism, in order to continue existing, requires a constant expropriation of free labour, especially of women’s (2004). Federici connects the rise of capitalism to the struggle of communalism and feudalism and the the success of capitalism depends on the subjugation of communalism. She situates the institutionalized punishment of prostitution, witches and heretics to the beginnings of proto-capitalism (2004). By incorporating imagery of paganism and magic, I want to reintroduce the radical potential of the gay male body that have been lost due to heteronormativity, privilege and capitalism.

I decided to use body parts to create my photomontage because queer and gay bodies are the sites of our political resistance and therefore, the sites for our political liberation. Photomontage is a great way to illustrate the fantastic and the eery using recognizable imagery, which has been a technique of choice for the Surrealists, radical architects such as Archigram to current speculative futures designers (Jain et al 2011).  Gay bodies bodies have been experimented on, chemically castrated (Turing), burnt (the origin of the word “faggot”) and were famously wrapped up a bag and thrown on to the lawn of the White House on October 11th 1992 to protest the US government lack of action during the AIDS crisis (Hubbard 2012). I am also deeply interested in the softness of technology and the “triumph of software” which is more malleable and has connotation of playfulness (Banham 1981). In Banham’s 1981 essay, he stated that software is able to quickly adapt to change, and undermine the rigidity of hardware. I see this also as an analogy to counter culture’s’ relationship to the strict culture of a normative hierarchical nuclear capital society. Softness also informed my choice of using fur to conceal my hardware.

Ephemerality is explored in my project through the game mechanic. By moving the body parts around, the player reveals the hidden objects, but if they move the body parts away, the revealed object quickly disappears. Scholars have suggested that queerness is often represented through ephemera such as untimely death, dance and gesture as communication and short-lived spaces (Desmond 2001; Castiglia and Reed 2011; Farmer 2000; Getsy 2016; Muñoz 2009). I wanted to incorporate this queer ephemerality by letting it inform the design of the game mechanic. Gay Magic is a small experiment of my major research project which will be a video game that will bring out the radical potential of the gay male body through looking at queer history, speculative futures, cyber spaces and dance.

Castiglia, Christopher, and Christopher Reed. If Memory Serves: Gay Men, AIDS, and the Promise of the Queer Past. University of Minnesota Press, 2012.

Desmond, Jane E, editor. Dancing Desires: Choreographing Sexualities On and Off the Stage. The University of Wisconsin Press, 2001.

Muñoz, José Esteban. Cruising Utopia: The Then and There of Queer Futurity. New York University
Press, 2009.
United in Anger: A History of ACT UP. Directed by Jim Hubbard, The Film Collaborative, 2012.