This piece deals with my personal experience moving through online spaces and being triggered by content. In my time online I have seen an increase in the use of content and trigger warnings online, as well as a rising debate surrounding the experiences of those being reminded of trauma online. Often these experiences are delegitimized, challenged and seen to be over reactions. From my own experience, online content is just one of the inputs I have that can cause me to relive and be reminded of my trauma. This piece is both a statement and experiment as I extend my internal experiences beyond my thoughts and translate them into a recorded physical reaction. Everytime I am triggered by content online I will press the button, prompting a facebook status to be sent. The record of my emotional reactions exposes my insecurities surrounding not being believed, fueled by years of being challenged. The platform of social media is one that I share all of my art on, and have been able to reach a large audience through this and foster community. But, I often wonder how this public platform complicates my healing, how it reinforces concepts of validation, and how the platforms themselves are tools used often to perpetuate rape culture online. This tool to record this data is not a page I will share with others – although those who I did show it too told me they found themselves checking it often – wondering if any new statuses arose.

The piece is titled JOG to reference the term “jog my memory”.

I used the button set up from experiment one digital input example. The button parts were soldered on and connected using longer wires. 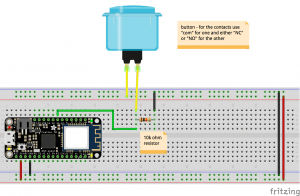 Link to my code used for Arduino and P5js – https://github.com/quinnrockliff/Experiment-3- 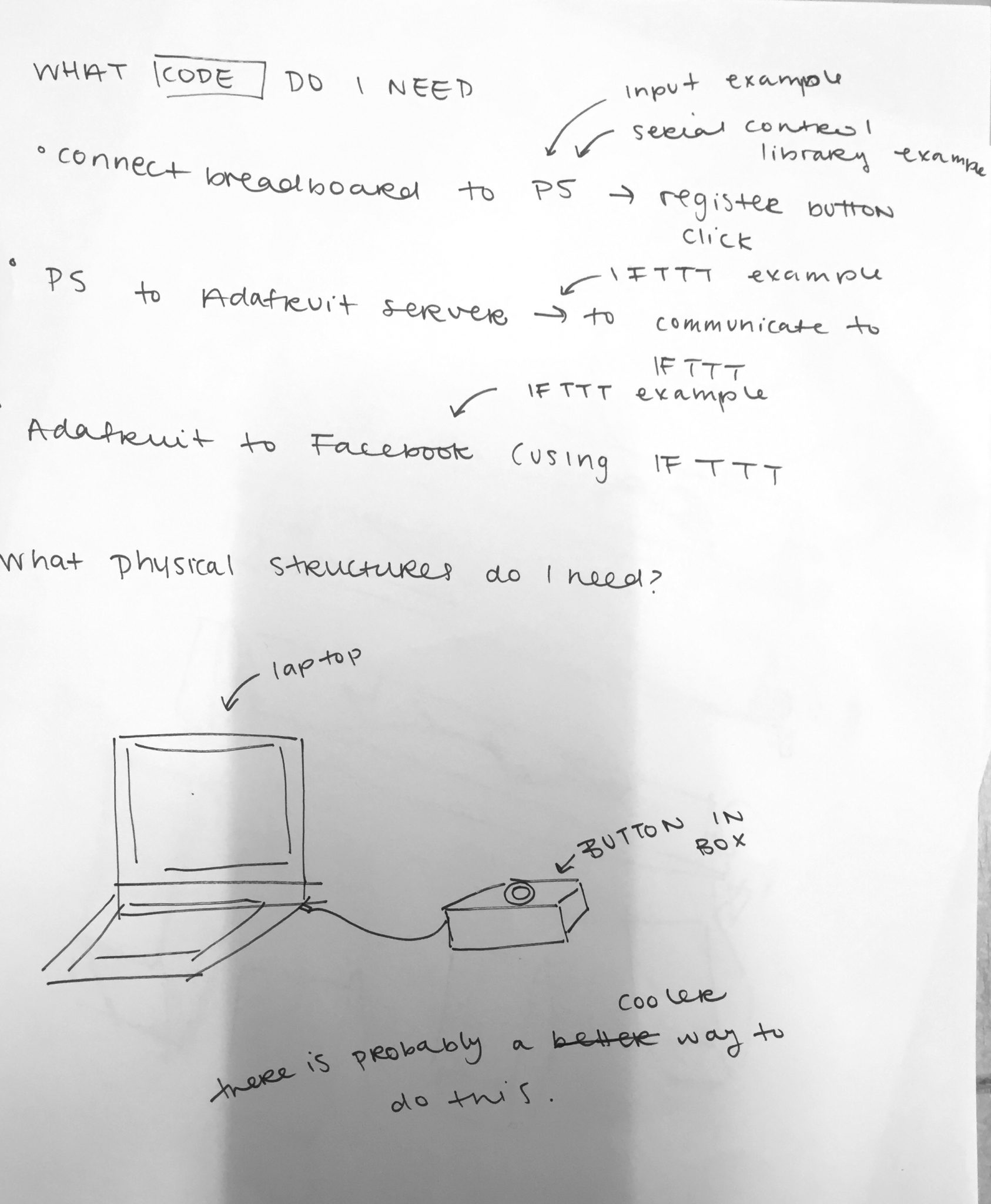 This is where I began my train of thought. I broke down my process into steps and followed it pretty much how I thought I would. Although it seemed much more simple at the time. I began to become very aware of the amount of content online I was bothered by – this made this project a little bit hard to work through, but ultimately – this was what I was trying to negotiate.

I knew I had to connect my serial port (arduino data) to a webpage. I knew how to do this from our in class example that used graphing and a potentiometer but I wanted to use a button. I started off building on the graphing code and had a very silly graphing function happen where the graph just went up one line and down again when you pressed and released the button. 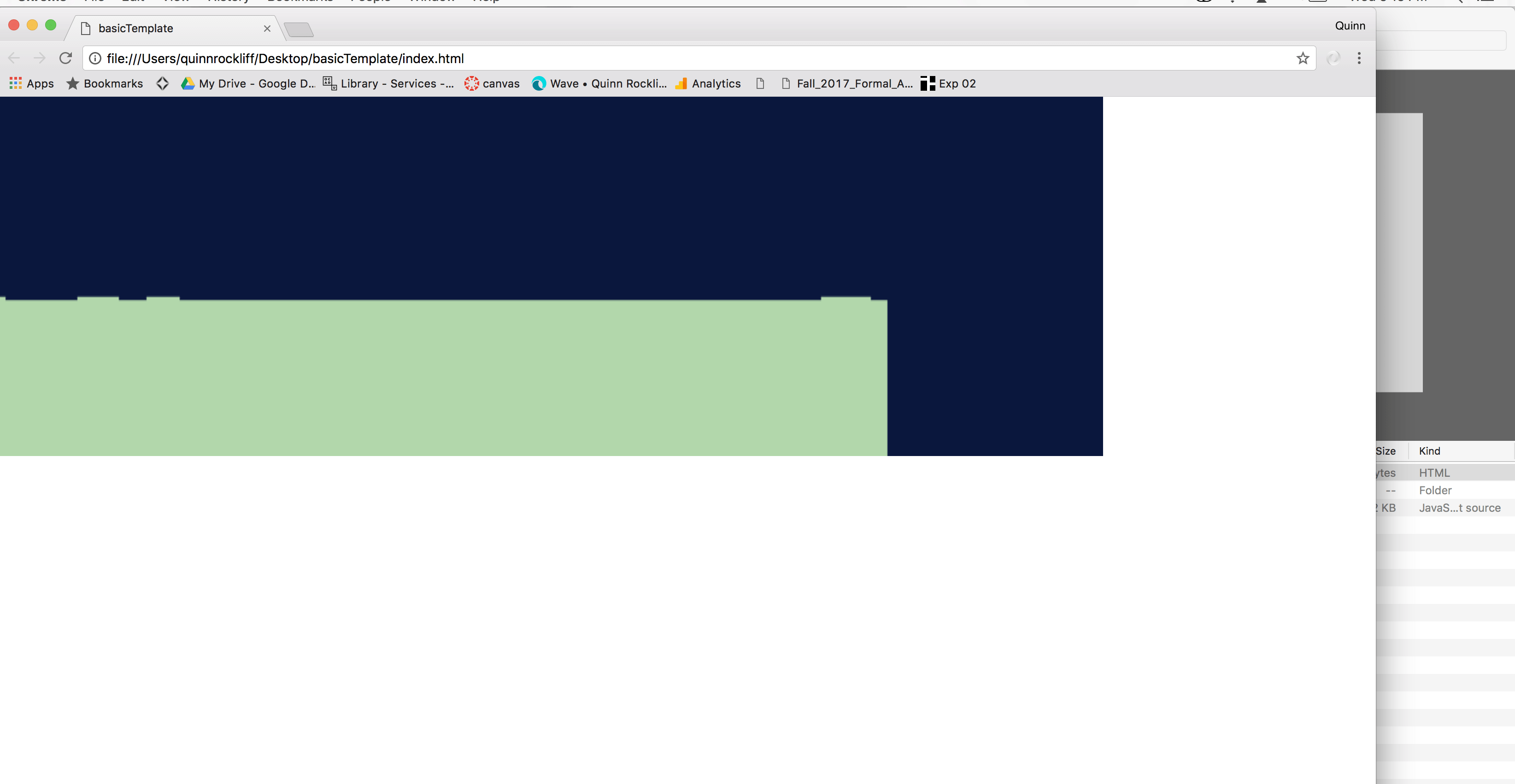 This was something! So now what I needed to figure out was how to send this data to IFTTT using Adafruit IO. I used the code from the IFTTT example but was having some trouble creating an if statement that made sense. It turned out this was really an issue of not having two =.

Then came the next issue, Adafruit IO was reading the data, and IFTTT. It seemed that everytime I pressed down the button, even for a second it read a change in data upwards of 200 times, this meant 200 tweets were being sent to my twitter account and I was blocked out very quickly. I had to delete and recreate applets multiple times after this happening. I went to office hours and I created a new variable called prevdata which = 0 so that any time prevdata came before 1 it would register, otherwise it would not. 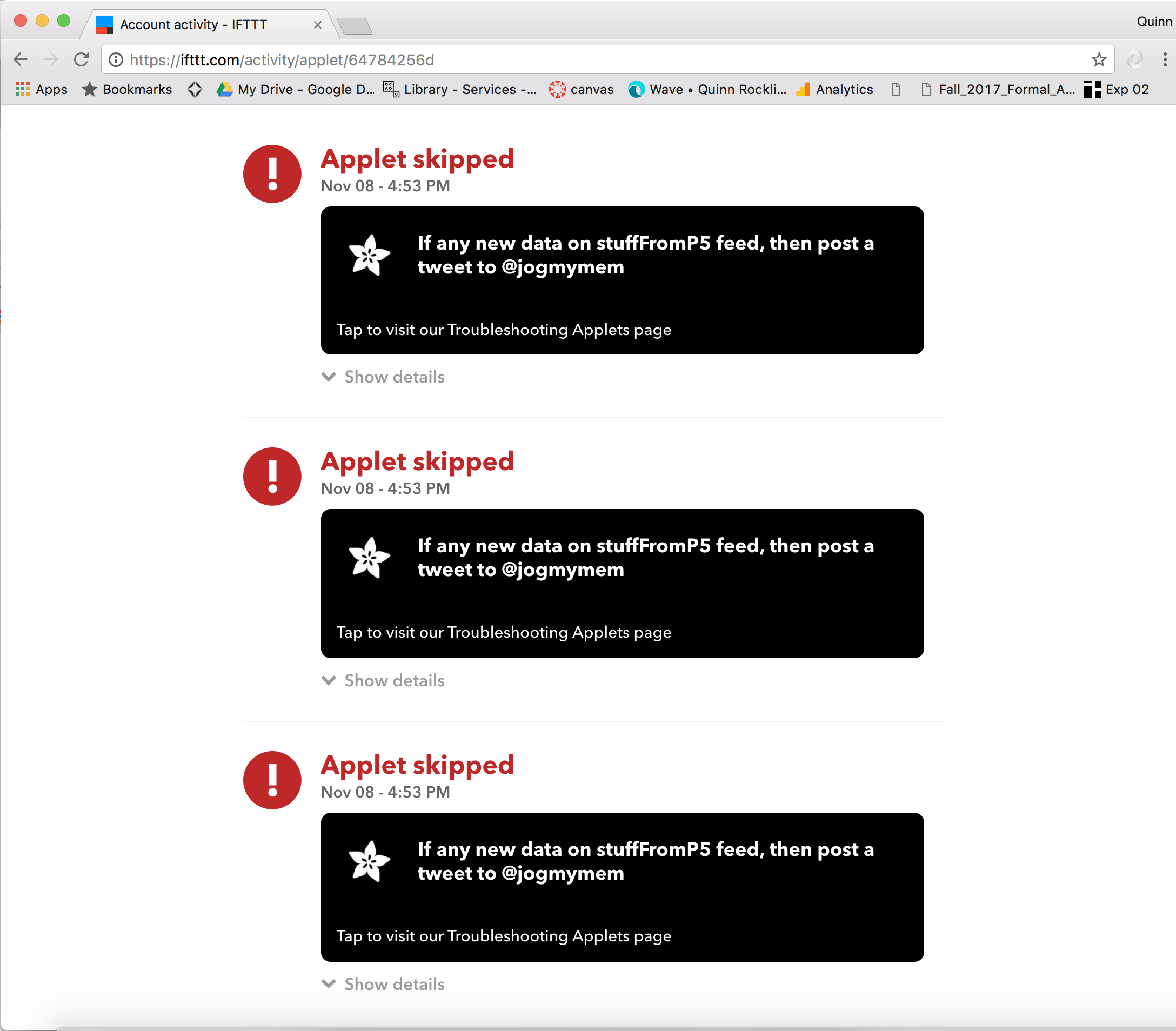 As you can see in my initial sketch I expressed some interest in a way other than the classic box to put the button in but I didnt have time to do so. I put my breadboard and wired my button through a hole in a box. I wanted to add more emphasis to the narrative and doubts of this piece so I did stream of consciousness writing on the outer layer of the box. 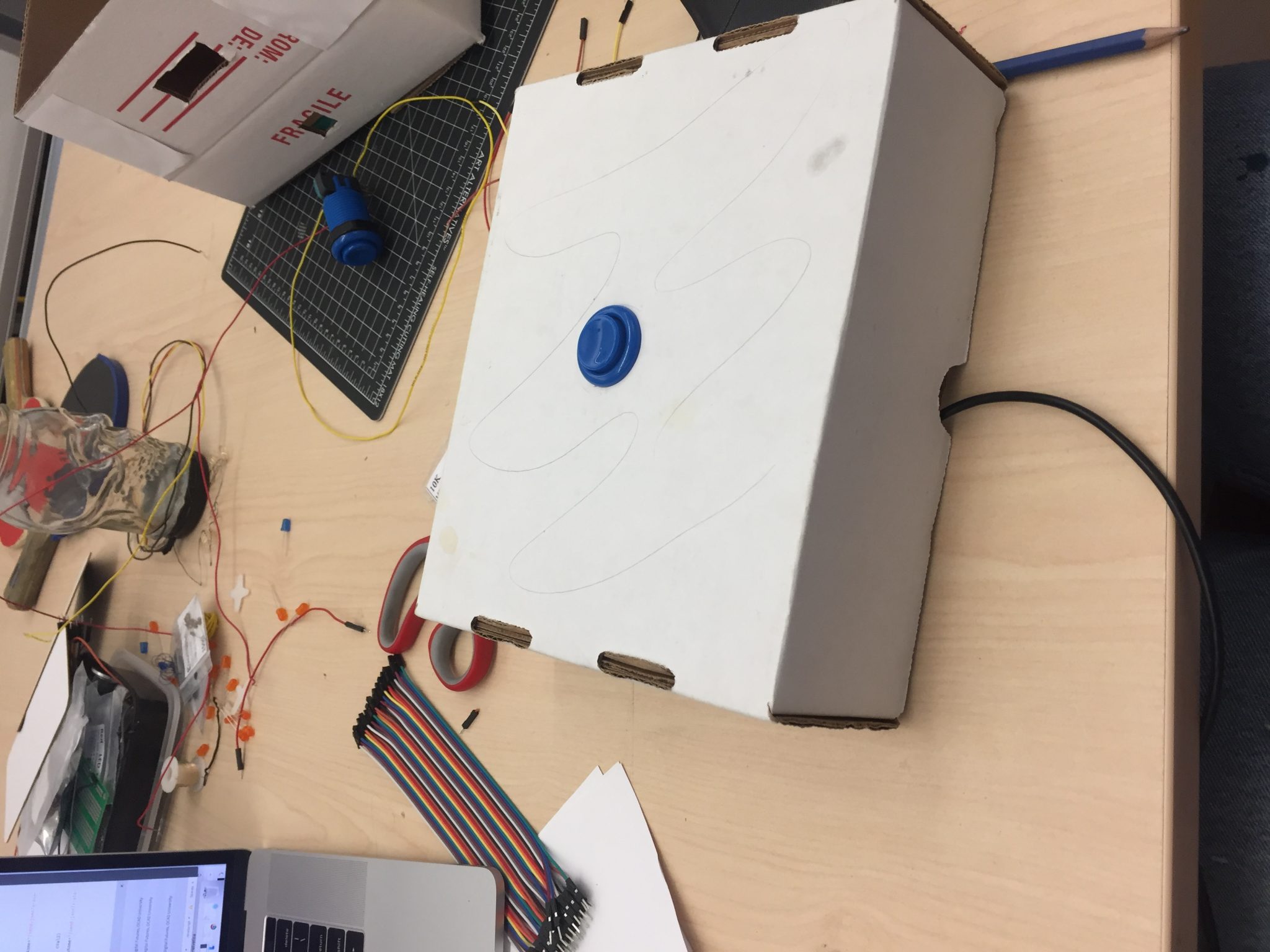 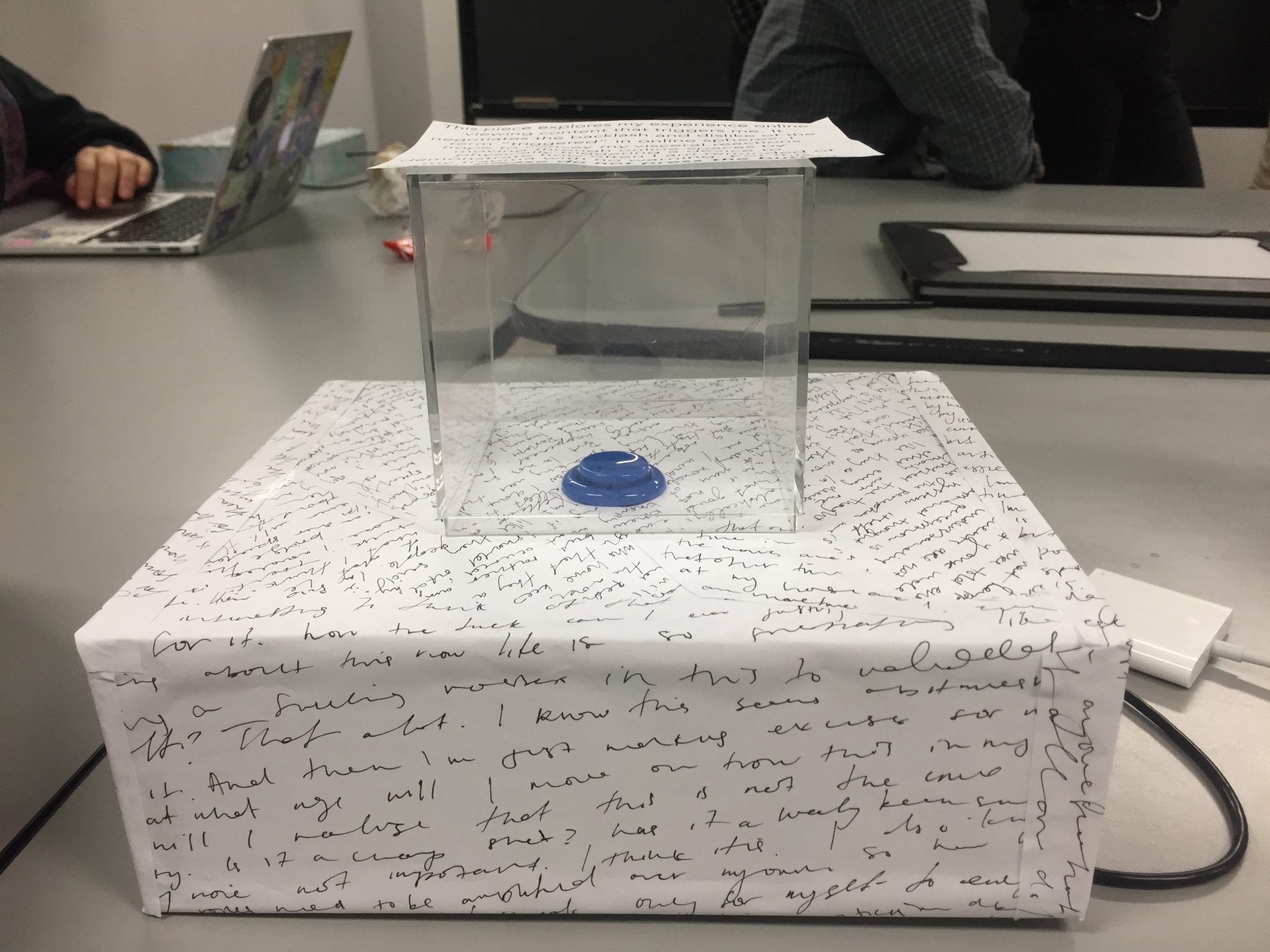 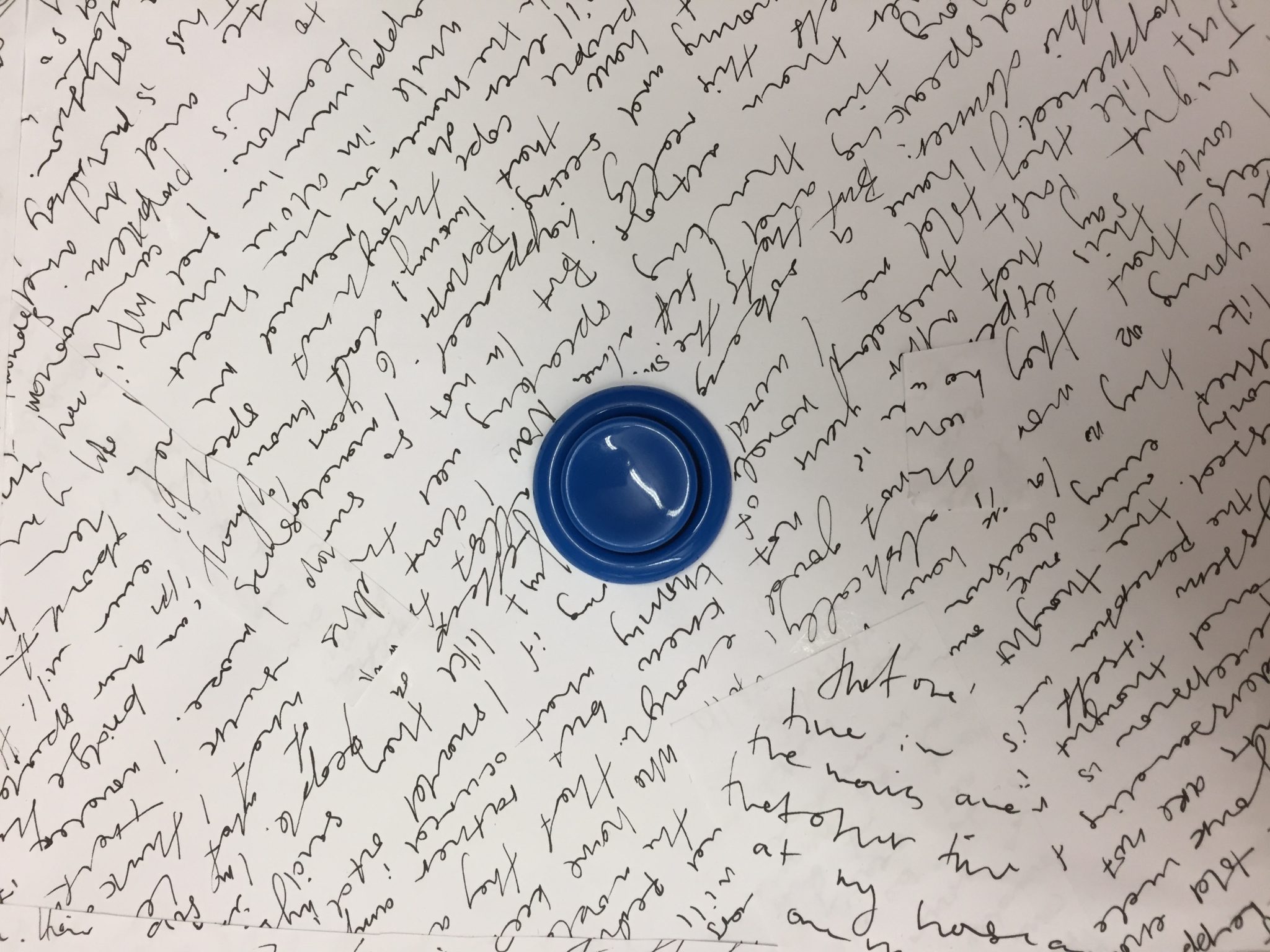 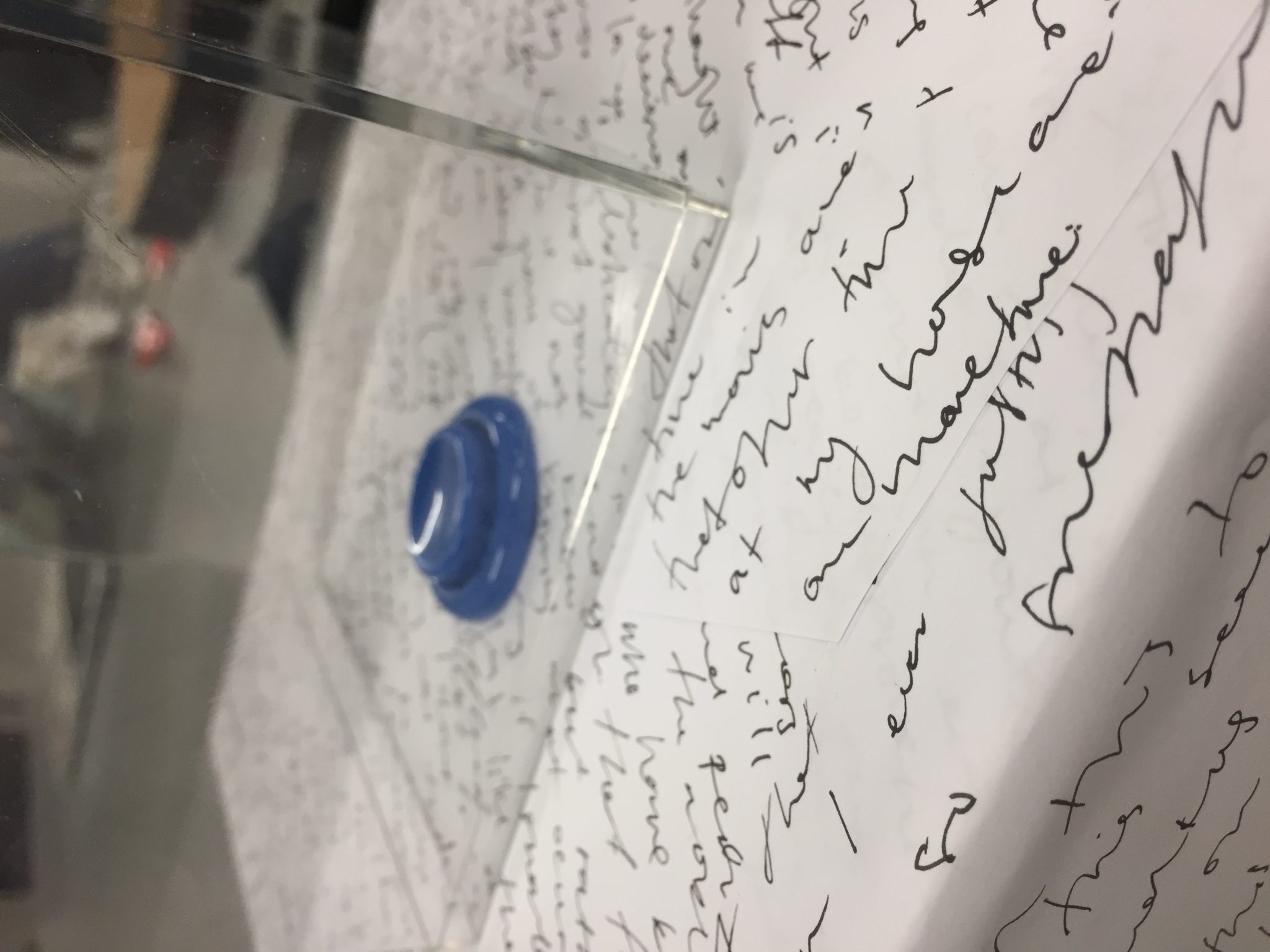 The issue of presentation and demonstration also became an interesting aspect of my piece I did not previously consider. I did not want anyone else to touch the button as this would stop the data being a reflection of my experience. This caused me to write a little excerpt and placing an acrylic box over the button. This raised issues of consent and temptation that I did not anticipate but I believe are actually fundamental to the extension of my emotions into physical action and the vulnerability associated with doing so. 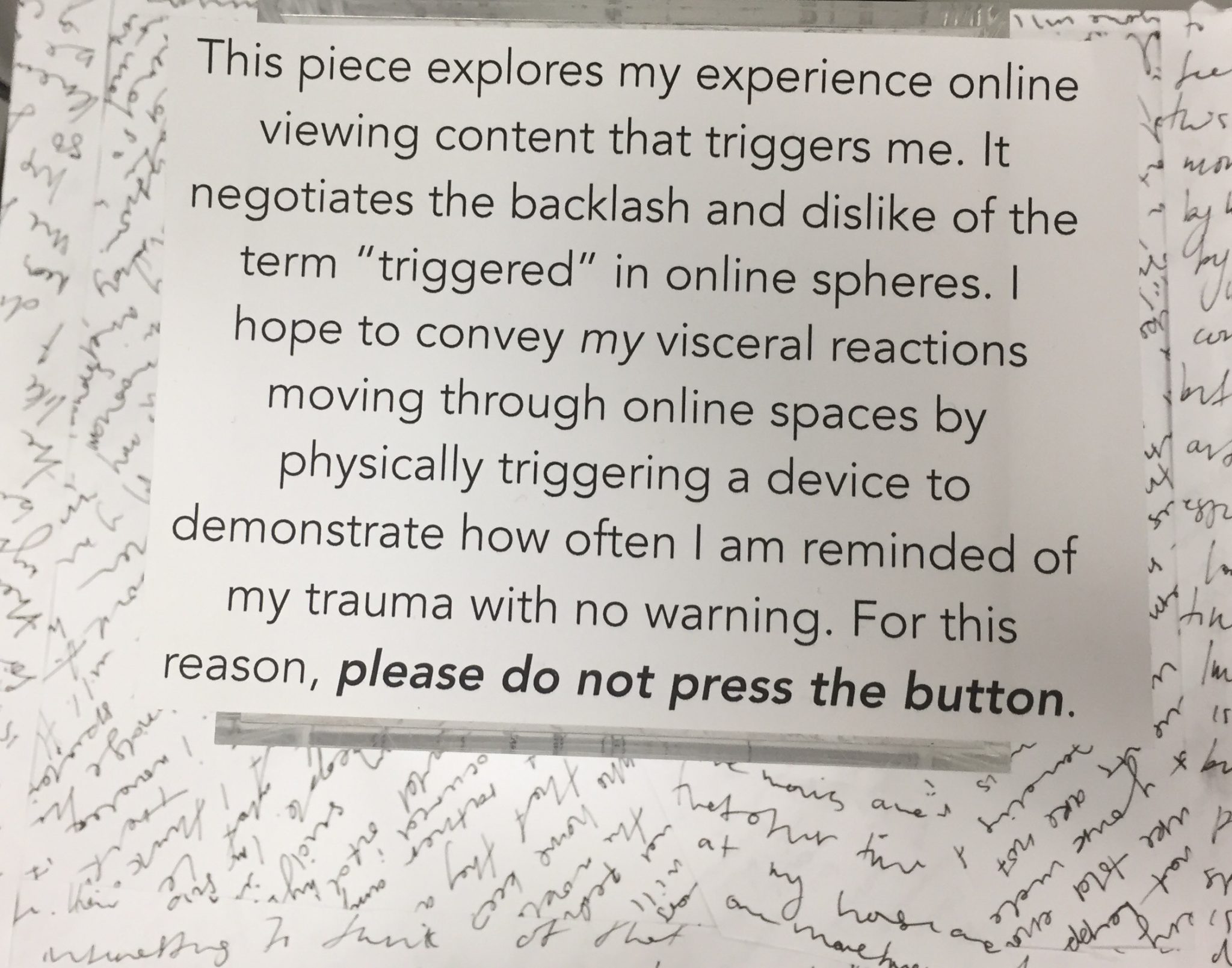 Luckily and unsurprisingly, all my classmates were respectful and followed the instructions. Yet, I wonder if placed in a public place without my gaze if people would do the same. That is an equally interesting experiment tackling consent and gaze that I may consider in future iterations or new pieces. 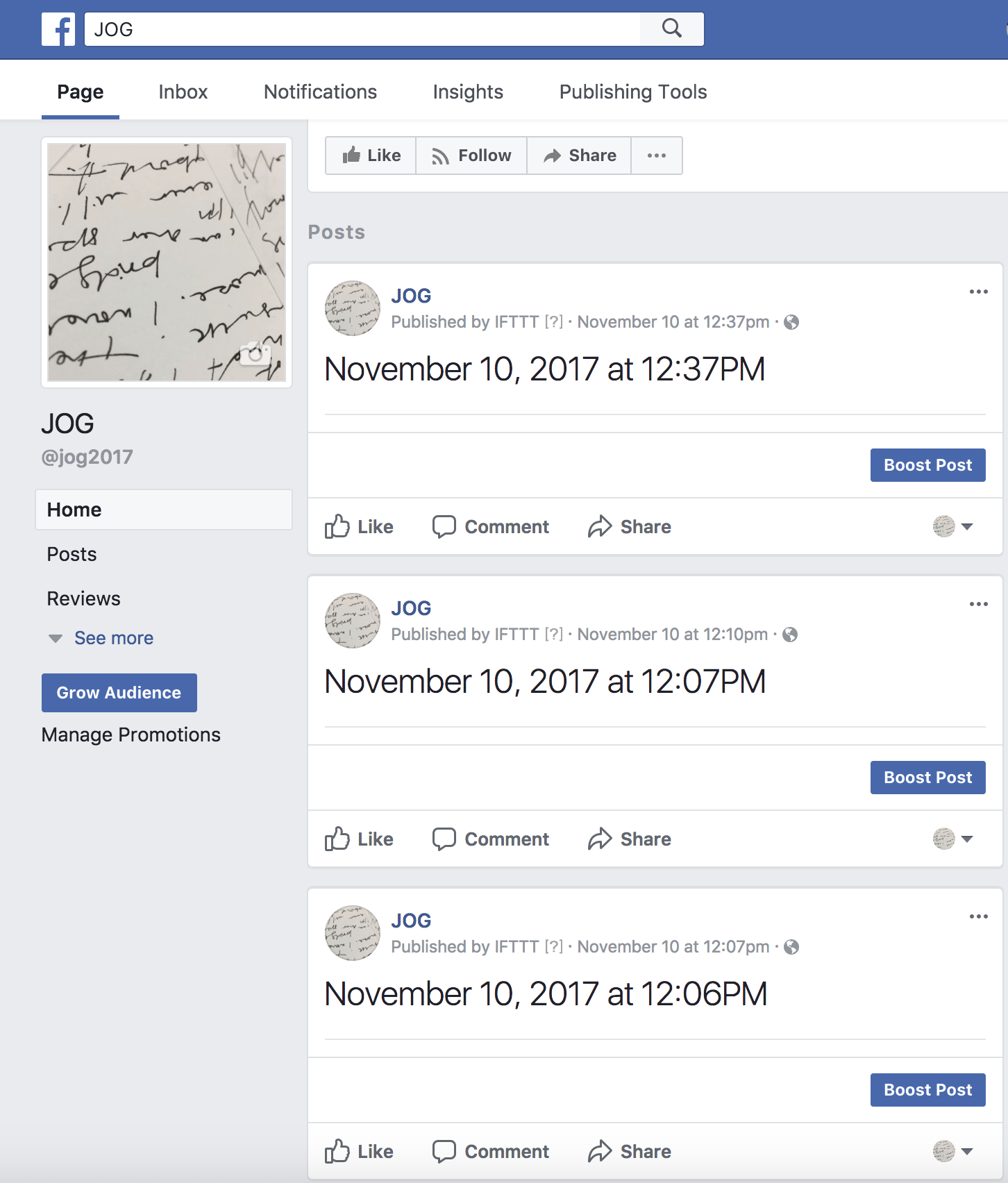 Documentation of my project functioning – via fb statuses published by IFTTT.

I am  influenced and inspired by Emma Sulkowicz. The artist best known for their work “Carry That Weight” after their university refused to expel their rapist. Their later work involves technology and a lifesize sculpture called Emmatron that answers questions so that they don’t have to. This is something I negotiate in my work often, how I answer questions interpret those questions and how they challenge my experience. How to be open without opening wounds. 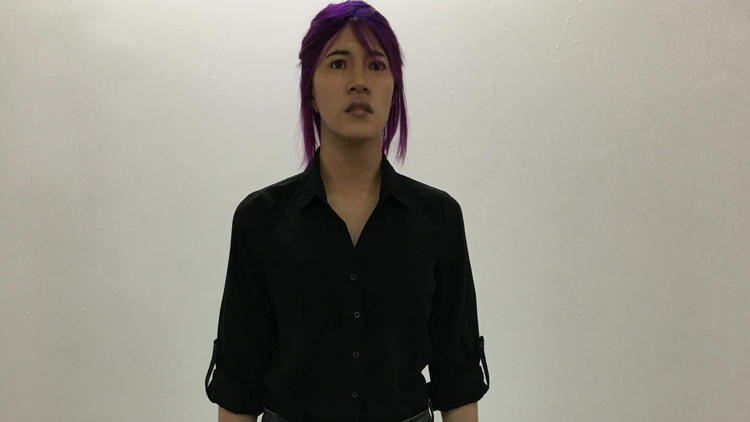 More about that piece here: http://www.latimes.com/entertainment/arts/culture/la-et-cm-emma-sulkowicz-los-angeles-coagula-emmatron-20160228-story.html

Furthermore, this was very driven by my own experience. When I signed up to make a twitter for this assigment this is what I saw Checking to see if my facebook status posted I saw this 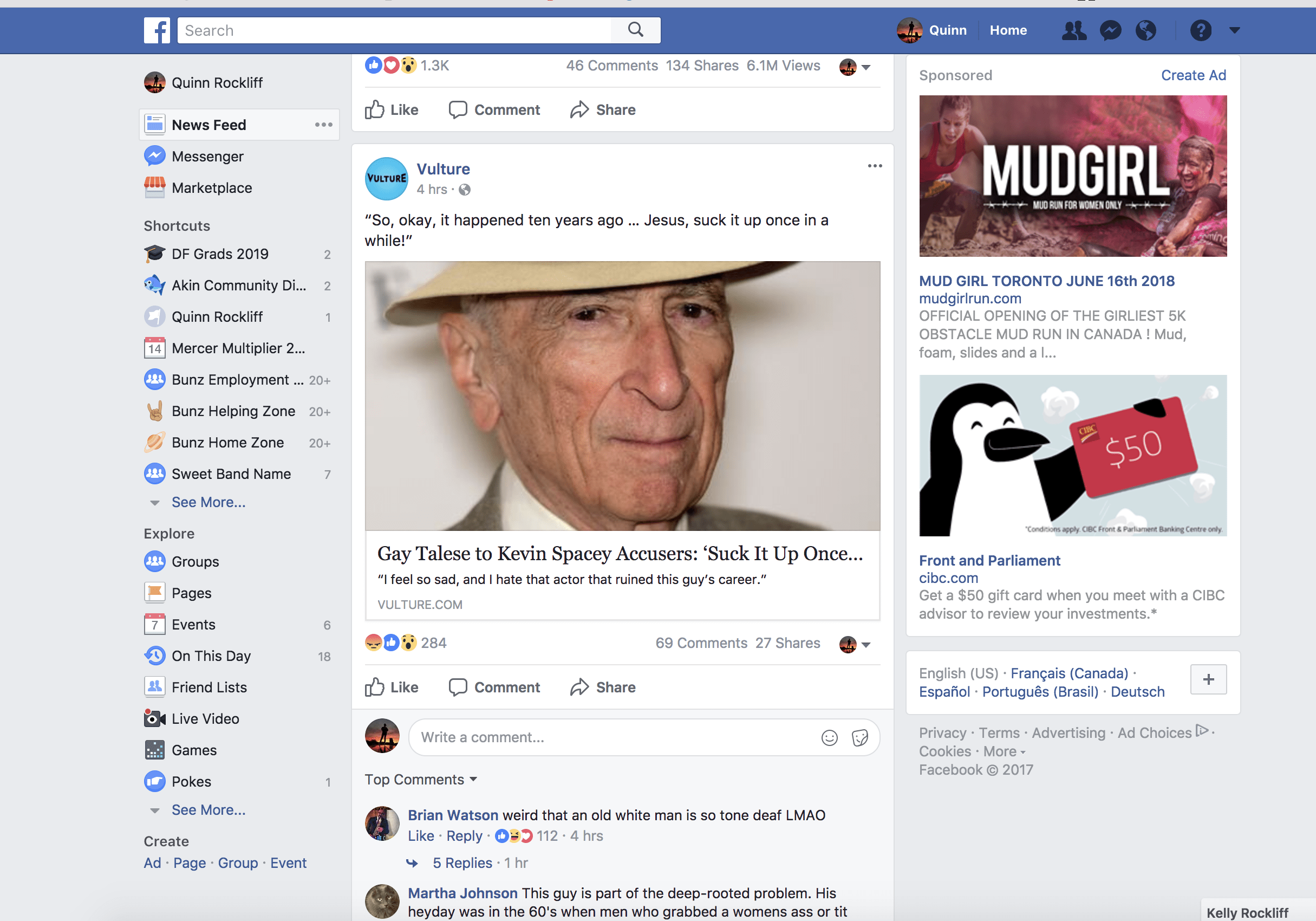 The desire to both address these things and ignore them are what encouraged this design. Issues of validation and self doubt drove the text written on the box. The prompt to make something that is an extension of what I see online made this decision obvious, what I see online reinforces what I experience daily and the connection of the two through a somewhat dramatic physical movement (pressing a big blue button) exposes the desire to make this experience more evident to both myself and others. 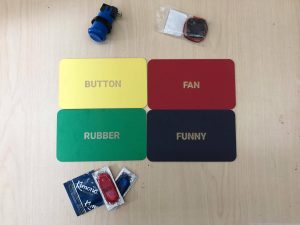 The Adult Sky Dance Off is a series of “sky dancers” which operate at 2 speeds upon the power being turned on by the button sensor. It features figures made from rubber condoms in order to  comply with the requirements, which will be blown up by the a fan motor and the Arduino microcontroller. This is the ultimate product of this assignment which called for 4 main components of: a button as a sensor, a fan motor, rubber as a main material, and needed to be “funny”. The participant stands behind the set of the sky dancers an turns on the program, by pushing the button they are then able to create a dance that others can view for entertainment. 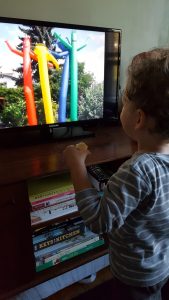 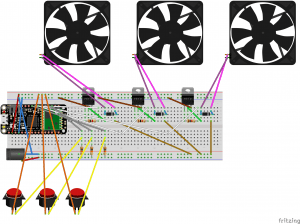 We began this project initially with the idea of creating a whoopee cushion. And then moved to the idea of creating a phone accessory wind-blowing-selfie-effect. Both ideas were discarded for the same reason; the strength and speed of the fan would not be able to power these projects. We readjusted for our limitations and developed this sky dancer idea.

We began by writing the code to power the 5V fan. We quickly ascertained that the speed would still not be sufficient for our idea. So we bought three 12V fans to replace the ones we were already equipped with in our kits. Along with them we needed a 12V power supply outlet as well. Our prototype ran better with the new equipment, however there was still a bit of difficulty regarding the fact that the condoms weren’t ‘dancing’. So to account for the slow fill-up time, we decided to use the button not just as a power switch, but as a way to adjust the fans at two variant speeds that would simulate a kind of ‘dancing’. 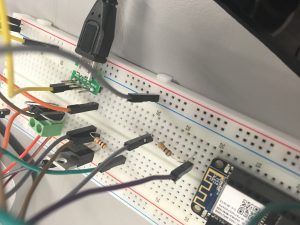 We then had to find the condoms which would best fit the nature of our project. We sought out both lightweight and colourful options. When it came time to construct the project it became clear that the decision to use higher volt fans was the right call. We found that even these fans were not powerful enough at their highest setting to fully inflate the condoms, and this became the largest challenge we faced. We experimented with cutting off the top and poking holes for air to escape and give the dancers more of a dramatic movement. These ideas proved fruitless. Ultimately we decided that cutting them to make them shorter was necessary.

To further air in inflation we discovered that the fans needed access to more air beneath their base. Using screws legs was effective in this regard and led to better results. We had to successfully embody our 4 variables and initially the most difficult one to include was “funny.” By the end it was this characteristic that the project was built on. We strove to attain this by the materials we chose and the element of interactivity. It at once references the innocent entertainment of a puppet show while also possessing a level of cheekiness and humour to the final sky dance.