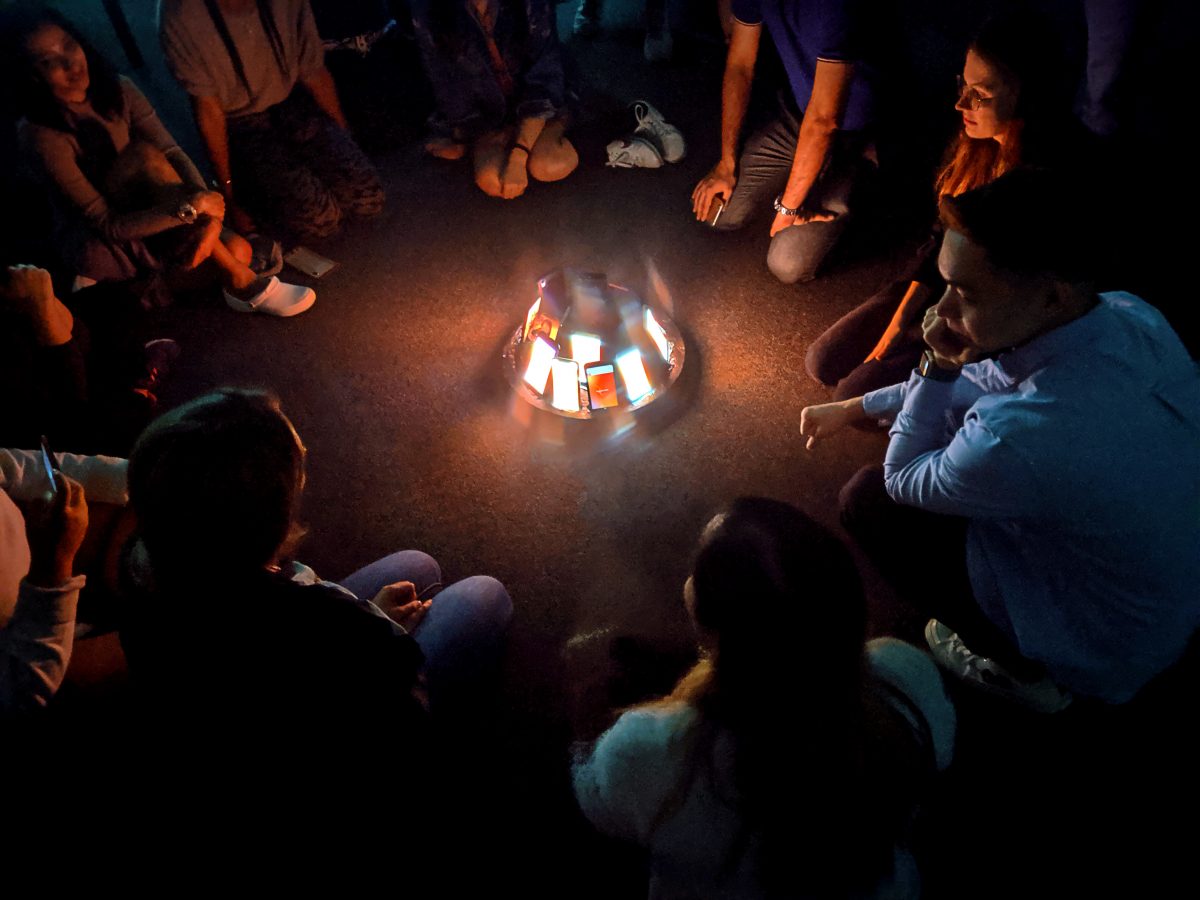 Our experiment was an exploration as to how we could create a multi-screen experience that would speak to the value of ‘unplugging’ and having a conscious and present discussion with our classmates using the metaphor symbolism of the campfire.

From the beginning, we were both interested in creating an experience that would bring people together and be able to have a sort of digital detox and engage in deeper face-to-face conversation. We wanted to play along with the current trend of digital minimalism and the Hygge lifestyle focused on simpler living and creating deeper relationships.

While our project would only provide about a 10 minute reprieve from our connected lives, we wanted to bring to attention, while we’re in a digitally-lead program, that face-to-face conversation and interaction is just as important for improving our ability to empathize with one another.

Visual inspiration was taken from the visual aesthetic of the campfire as well as the use of abstract shapes used for many meditative and mental health apps such as Pause, developed by ustwo. 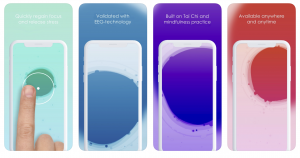 The sketch is laid out with three main components: the red and orange gradient background, the fire crackling audio, and the transparent visuals of fire.

On load, the .mp3 file of the audio plays with a slow fade in of the red and orange gradient background. The looped audio file’s volume is dependent on mic input, so that the more discussion from the group participating amplifies the volume. The visual fire graphics at the bottom adjust in size dependent on the volume of the mic input, creating a flickering effect similar to a real campfire.

To lower the volume and fade the fire, users can shake their devices and the acceleration of the x-axis causes the volume to lower and the tint of the images to decrease to 0. This motion is to recreate shaking out a light match.

Development of the Experiment

Our initial thought about visually representing the camp fire was to recreate an actual fire. Though we realized from our intentions to have all the phones laid flat on a surface, that fire is seen from a vertical perspective, while the phones would lay horizontally so we went with a more abstract approach instead by using gradients.

The colours chosen were taken from the natural palette of fire though we also explored sense of contrast with the use of gradients.

Originally we tried working with a gradient built in RGB, though while digging into control of the gradient and switching values, Lilian wasn’t quite comfortable yet with working with multiple values once we needed to go having them change based on audio level input.

Instead we began developing a set of gradients we could use as transparent png files, this allowed us more control over what they visually looked like and allowed the gradients to become more dynamic and also easier to manipulate.

Initial testing of the .png gradients as a proof of concept, worked as we managed to get the gradient image to grow using the mic Audio In event.

While Lilian was working on the gradients of the fire, Nilam was trying to figure out how to add on the microphone input and make the gradient corresponds to the volume of the mic input. One of her solution was using mapping.

The louder the input volume the higher the Red value gets and the redder the screen become. This way they could change the background to raster image, and instead of lowering the RGB value to 0 to create black, this changed its opacity to 0 to show the darker gradient image on the back of it.

Nilam made edits on Lilian’s version of experimentation and integrated the microphone input and mapping part into the interface she already developed.

We were still trying to figure out why mic and audio input and output was working on our laptops but not on our phones. The translation of mic input on to increase the size of the fire seemed laggy even attempting to down-save our images.

On our mobile devices, the deviceShake function seemed to be working, while laggy on Firefox, playing the sketch on Chrome provided better, more responsive, results. Other issues were once we started changing the transition of the tint for our sketch that sometimes the deviceShake would stop working entirely.

We wanted a less abrupt and smoother transition from the microphone input. So we tried to figure out if there are functions like delay. We couldn’t find anything so we decided to try using if statement instead of mapping.

We found out from our google searches that there is a possibility of a bug that stopped p5.js certain functions like deviceShaken from working after the recent iOS update in this past summer. Because, while laggy, it still worked on Lilian’s Android Pixel 3 phone, while it just completely never worked Nilam’s iPhone.

Additionally, Lilian started working on additional exploration like mobile rotation and acceleration to finesse the functionality of the experiment. She also began exploring how we could incorporate noise values to recreate organic movement. We were inspired by these examples using Perlin noise.

To add the new noise graphic, we used the createGraphics() and clear() functions to create an invisible canvas on top of the gradient to let the bezier curve trails so it looks like a flame. It clears itself and repeat the process again after the 600 frame count to decrease loading problems in the sketch.

After reviewing our code we realized some of the issues we were having with the audio were because of Chrome’s privacy restriction with disabling auto-playing audio, as well as our mic problem was because we placed our code within the function setup { section and was only running once, as compared to once we moved it to function draw {, the audio seemed to be working better. 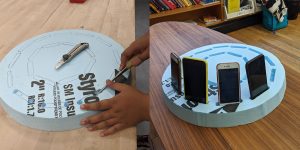 After getting feedback for our prototype, we started creating a stand that we could place everyone’s phones during the presentation. We laid out two rows of stands, the outer circle holding 12 phones, and the inner circle holding 8 phones, as we explored how we could better re-create the ‘fire’ when we have out multi-screen presentation. 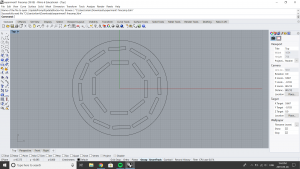 We started out by sketching the layout for the phone stand. The size is based on the widest phone width someone has in our class. We then went to the Maker Lab and drilled into the circular foam and chiselled out the middle sections to create an indent that the phones could sit within. 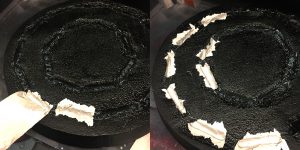 The next step is to apply finishing to the foam. We used black matte spray paint to cover the foam. The foam deteriorated a little from the aerosole of the spray paint, which we foresaw, but after a test paint it didn’t seem to damage the structure much so we decided to proceed.

Finding the mobile deviceShake event wasn’t working, Lilian created a new sketch testing the opacity and audio level using accelerationX as the new variable. The goal was to test changes in acceleration cause the audio volume to decrease and the images to fade out. AccelerationX seemed to providing more consistent results and was added into the main Experiment 1 sketch.

This experiment is primarily conversation lead. Set-up from the facilitators are creating a wide open space for everyone to sit and dimming or turning off the lights to recreate a night scene. Users are then asked to load in the P5 experiment and join together in a circular formation in the room.

Users should allow the fire animation to load in and place their phone into the circular phone stand. The joint phones coming together recreate the digital campfire. Facilitators then can  speak to the importance of coming together and face-to-face conversation.

The session can run as long as needed. When the session is finished, users can shake their phones to dim the fire and lower the volume of the fire crackling audio.

However, it did have an impact on the foam around the slots. It melted the foam with the paint and it wouldn’t dry. We thought we could have use gesso before the spray paint for future reference, but we had to improvise for this one so we used paper towels. 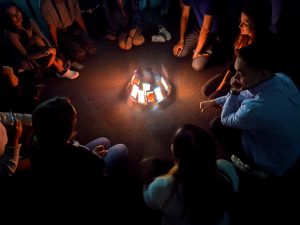 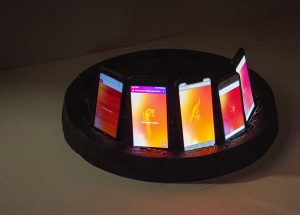 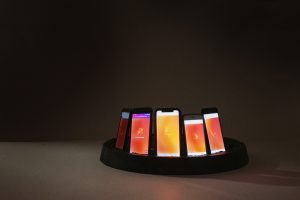 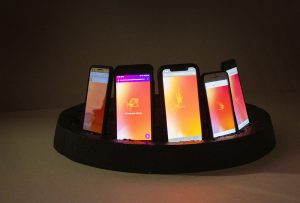 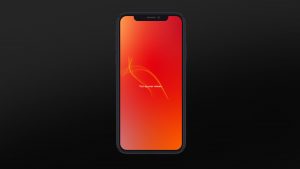 The code for our P5 Experiment can be viewed on GitHub
https://github.com/nilampwns/experiment1

The project’s concept was taken from our mutual interest in creating a multi-screen experience that would cause classmates to come together in an exercise rather than be just an experiment using P5 events. After brainstorming a couple of ideas and possibilities within our limited personal experience with programming, we came up with an idea about ‘unplugging’ and having a full attention to the people around us without distraction of devices, except that it is facilitated by screens.

We wanted the experience to be about ‘unplugging’ to recognize the value (even within a digital media program) that time away from screens is just as beneficial and an opportunity for self-reflection. While technology allows us to extend ourselves within the virtual space, there are also many consequences to our real life relationships and physical composure.

Described within a Fast Company article What Really Happens To Your Brain And Body During A Digital Detox (2015) experts explained that our connectedness with our digital devices alters our ability to empathize, read each others emotions as well as maintain eye contact in real life interactions.

After our presentation, we looked Sherry Turkle’s work in Reclaiming Conversation: the power of talk in the digital age (2016). Turkle describes face-to-face conversation is the most humanizing method of communication, and allows us to develop a capacity for empathy. People use their phones for the illusion of companionship when real life relationships may feel lacking, our connectedness online leads us to discredit the potentiality of empathy and intimacy of face-to-face conversation.

We chose a campfire as the visual inspiration for our P5 sketch due to the casual ritual performed today that provides both warmth and comfort while people connect with nature. Fire is pervasive across all human history, but within the present context, we use it as a symbol to voluntarily disconnect with technology and give one’s self the opportunity to nurture our relationships with nature and those close to us.

Expanding upon the campfire and going into the ceremonial practice of a bonfire, fire has been used across history as a method to bring individuals together for a common goal, whether it be celebrations or a folk lore custom.

Rather than working with the literal visual depiction of fire, we chose to take visual cues from mobile meditation apps.

We don’t believe our experiment will provide all these benefits, but we wanted to use it as an opportunity that while we’re in a digitally-lead program, face-to-face interaction is just as important. To provide each of our classmates a moment of self-reflection, we’re provided the unique opportunity to evaluate what we would like to offer for one another and to create.

We think that our presentation helped our classmates to take a break from the hecticness over constantly having to look at multiple screens while working on our experiment one projects. One of the feedback that we got was that the presentation would have been more successful if we had presented towards the end of the class when everybody had spent more time looking at screens.

If we were to develop the experiment further, we could explore how we could use the phones camera input ability to dim the fire based on eye contact to encourage users to look away from their screens when in conversation together. Further improvements could be functionality to blow on the phone to dim the fire which would require ranges of mic input to detect the difference between conversation and blowing on the phone.