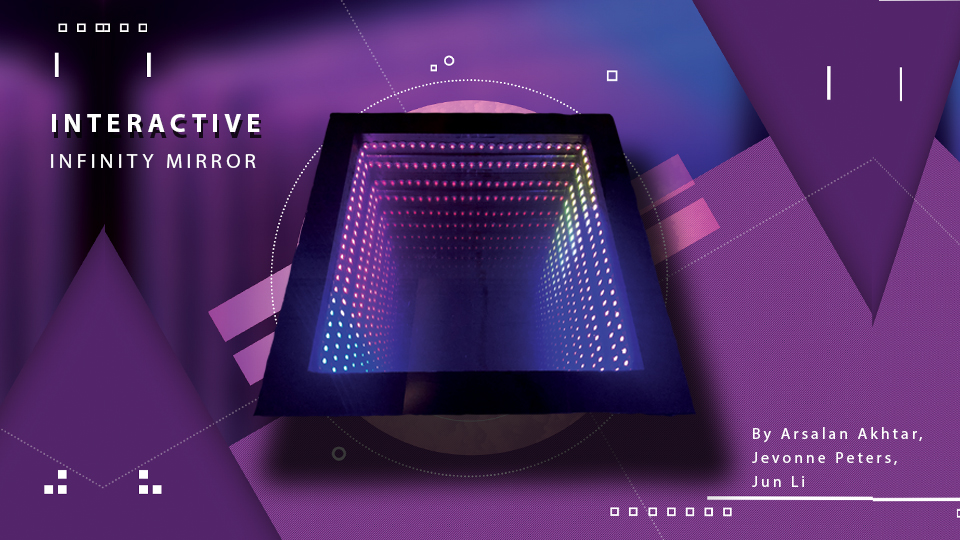 Proxemics – the study of human use of space and the effects that population density has on behaviour, communication, and social interaction.

This experiment is an interactive, LED-light project, exploring in a critique of the concept of proxemics – the study of human use of space and the effects that population density has on behaviour, communication, and social interaction. In our interpretation, we attempt to show a visual representation of various reactions to “personal space” that humans create around them, in the form of various interactions of light, and represent the idea of an ideal level of social interaction amongst multiple parties.

The purpose of this study is to visually demonstrate the effect people can have on each other through the use of different colour effects. The goal is to deconstruct the relationship between behaviours and colour, and reshape this relationship to be presented in a new form. Throughout this process, the parties control the effects based on the states they are in.

The goal of this experiment is to creatively use a microcontroller, up to 3 rangefinders, and actuators: any number of individual LEDs, or up to 4 servos, to create a minimum of 3 distinct behaviours in response to the environmental conditions.

In the planning phase concepts of anxiety, one’s “personal bubble/space”, and ideal desired interactions were examined. We determined that the most effective way to illustrate these changes would be by using light and incorporated the interaction of the primary colours of light (R, B, G) to illustrate this. We used the three distance sensors to capture the location of three participants within the space of the installation.

We completed planning the final design and concept, and began purchasing materials locally and abroad on October 4th.

Four ranges were plotted for each of the three sensors that read in the distances. This is reflective of the personal preferences of the three parties:

In our code, these were called states:

Based on the state of the system, different behaviours were manifested. For example, if the red and blue are in their respective comfort zones, the two zones meshed to form their additive colour, which is magenta. The table below shows the various interactions that were planned for both implementations.

* The time-based interaction was added from a suggestion from Nick.

The colour wipe when all parties are idle represents a state of receptiveness from everyone. No boundaries are being pushed, but no positive interactions are being made either. The colours cycle through without interacting with each other, and forgetting the previous state. If one or more sides are idle, and the other side(s) are in different state(s), the side goes ‘off’. The ‘off’ state indicates that it is not currently participating in the interaction that is happening. It is ‘Out of Touch’.

The rainbow, a common symbol of happiness and bridging, is used when one or more sides are in the ideal state. When within the installation, the desire is to remain in that state, and hope others can also find their ideal. Once everyone has it, the rainbow effect runs in sync, simulating an ideal flow of information and ideas.

There is of course, the potential for one to feel overwhelmed by a presence, and be ‘too close’ for comfort. When this happens, the corresponding side(s) flashes its colour repeatedly as a warning. If all sides are experiencing this, the additive colour (white), flashes for all sides. If this warning is ignored, the colour changes from white, to orange, then to ‘danger’ as red, speeding up as the warning continues to be ignored. 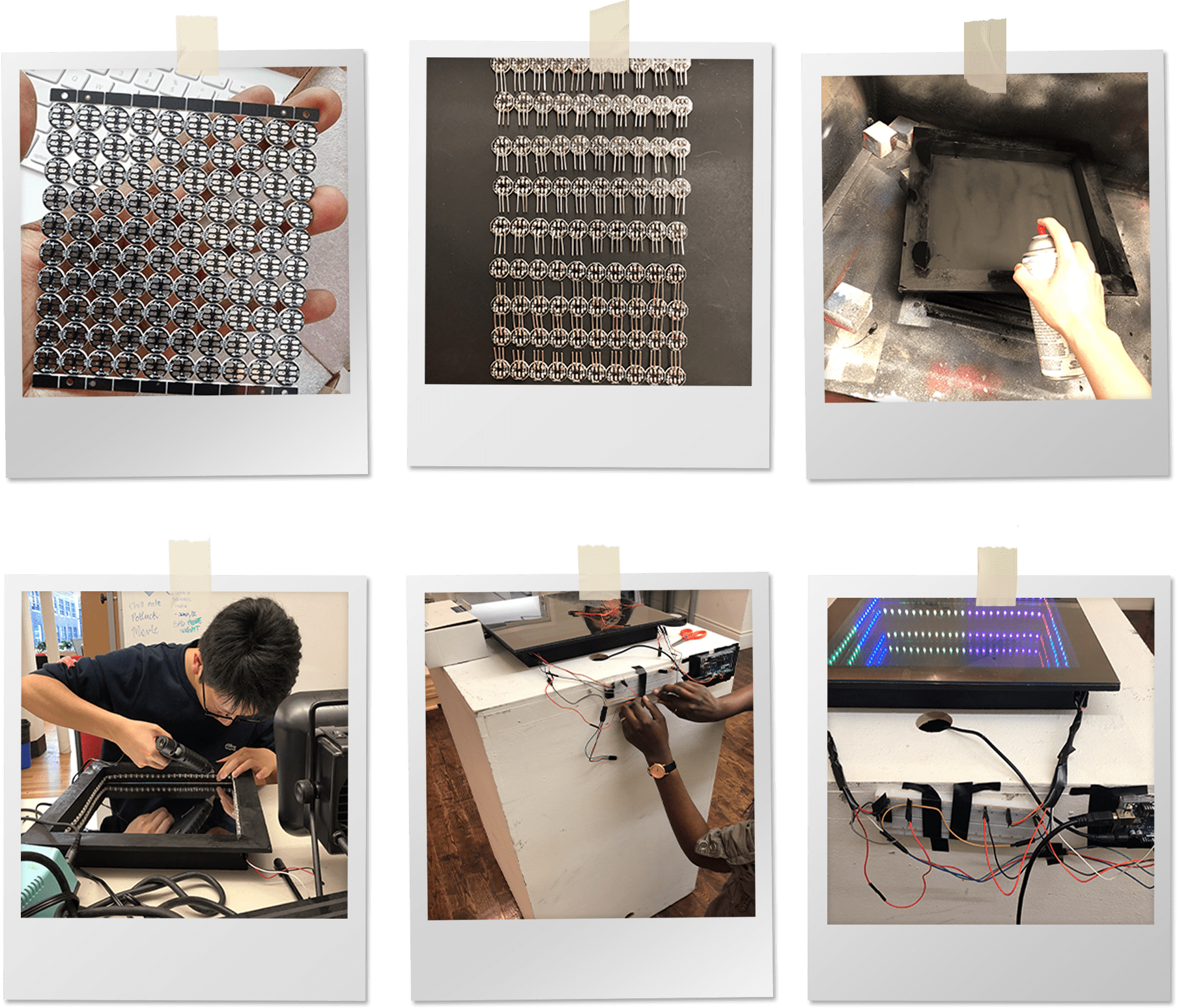 In this project, we were required to use individual LEDs. After considering the desired final effect of the project, we quickly abandoned the use of domed single colour LEDs, and decided to use WS2812 Neopixel LEDs. These have a full range of colours and can be individually addressed. This decision came with the challenge of soldering all the individual LEDs. Nonetheless, we were at an advantage as Jun Li had previous experience soldering, and was determined to take on the ambitious task.

As a first step, we measured and performed calculations on the box, and deduced that 23 LEDs were to be placed on each side, amounting to a total of 92 LEDs in all. Next was to create the LED strips to be placed inside the box. This involved first adding solder to the 6 connections, cutting the wires to the measured lengths, and soldering on each of the connections. A total of 1104 soldered connections were made by our team, and this figure did not include the several failures that occurred during the process. It was very important to ensure that each connection was sound and functioned impeccably. This was definitely a tough challenge for the team, and we relied heavily on the expertise of Jun Li as guidance, and who was aptly nicknamed ‘Solder King’. The entire soldering process took approximately 30 hours over the course of a few days.

The body of the installation was a shadow box spray painted black. A hole was cut on the side to feed the wires from the LEDs to the Arduino. A mirror was placed at the base, and the LEDs around the inside of the frame. To cover the frame, we cut an acrylic sheet to size, and added a layer of reflective film to it. Arsalan and Jun Li used their knowledge of fabrication and workshopping to make precise cuts and measurements for the holes and the acrylic. Adding the film was a group effort as a smooth and reflective surface was key to creating the desired effect. 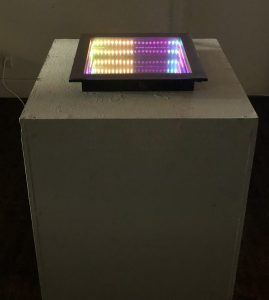 The Arduino-only implementation was built with the backing of the Adafruit_Neopixel, and WS2812FX libraries. Several other libraries were tested, including FASTLED, Neo Patterns, and NeoPixel Painter, but ultimately, WS2812FX was selected due to its simplicity, and wide range of built-in effects. The loop of the code ran the service function for the WS2812FX library, and then the distance readings of the rangefinders taken. If the difference between the current and the last distance value measured was above the noise threshold, the new state of the section(s) that rangefinder controlled was determined, and the function to display that light effect was activated.

The effects were replicated using a TouchDesigner + Arduino implementation. In this setup, Arduino was used as a communication tool and bridge between TouchDesigner and the WS2812FX LEDs. All the interactive effects and settings were performed in TouchDesigner, and sent to the LED strip through Arduino in real-time.

The light effects in the TouchDesigner and Arduino implementation proved to be easier to create, as it is a node-based and artist-friendly software. The transitions were smoother, and more visually appealing. However, this came with several drawbacks. The Arduino Nano and Uno were both not powerful enough to provide stable performance as a result of the two-way real-time communication, and the bridge (the Arduino) required to send and receive a large amount of data per second.

There were two possible solutions to this problem: (1) increasing the processing power by using an Arduino Mega, and (2) lowering the frequency of data transfer which would affect the real-time interaction and cause a delay. These two solutions were combined, and the parameters adjusted optimally to give the best performance, and mimic the effect in the Arduino-Only implementation.

The Arduino-Only implementation had similar issues with both processing and electrical power. To solve this, the brightness was lowered, and the rangefinder values were only read in every 5 seconds, as that was found to be the bottleneck in the code. This unfortunately made the installation less real-time, but the benefit was an increase in reliability and performance.

The only major obstacles during the hardware build, was the time required to complete, and skill required to ensure that the connections were true. Although buying an LED strip, would achieve the same effect and solve both of these obstacles, it would have been in violation of the limitations of this experiment.

This artistic experiment was meant to allow participants to critically consider the ideas of personal space in the context of proxemic behaviour. In a related study, “Proxemic Behavior: A Study of Extrusion”, the cultural group and sex were held constant and introduced the problem of the interviewer’s movement from the original comfortable distance established by the subject. In all cases within that study, the subject re-established a new comfortable distance, which in our study we called the “ideal” zone. The study surmised that this new state of comfort was a compromise between the one originally chosen, and the distance assumed by the interviewer. In our case, a retreat from the ideal resulting in a warning signal, and a new state of comfort was not sought.

Technology-based new media art is one of the forerunners of future art, and allows the creation of collaborative, and interactive artworks. This experiment serves as an example of such.